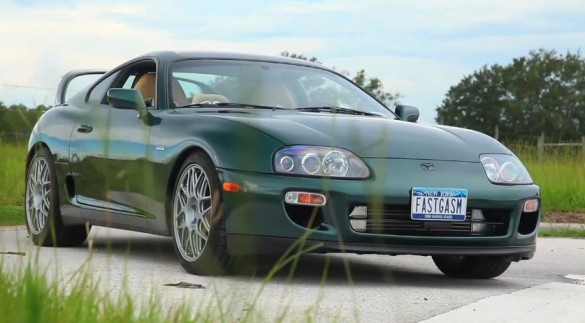 Last-generation Toyota Supras weren’t exactly the most common cars in the tuner world, since their steep new-car price tag limited the quantity sold. Still, Supras can be tuned to make serious horsepower, and their rear-wheel-drive platform ups the handling factor considerably. As Matt Farah points out, the cars got a big boost in popularity after the Fast and the Furious franchise became a hit, and “everyone wanted a ten-second Supra.”

Enter Orlando, Florida’s Titan Motorsports, one of the country’s premier Supra specialists. No matter what you want, from a stock restoration through a 2,400 horsepower Supra drag motor, Titan will be happy to hook you up. They know a thing or two about fast, since Titan has bragging rights to the world’s fastest Supra, a six-second NHRA drag car.

While street-legal, 1,000 horsepower Supras aren’t uncommon, as Farah points out, they can suck to drive on the street thanks to massive turbo lag followed by explosive, tire-shredding power. Sometimes, less is more, as is the case with the 700 horsepower, newly restored example feated in this episode of Tuned. With 600 horsepower at the rear wheels in a 3,400 pound car, there’s a lot to like; yes, there’s still turbo lag below about 3,500 rpm, but cross the 4,000 rpm barrier and you’d best be ready to shift. Quickly.

The Toyota Supra disappeared from the U.S. market after the 1998 model year, so clean (or even salvageable) examples are getting harder and harder to find. If you do come across one that’s too good to pass up, you probably want to have Titan Motorsports’ website bookmarked.