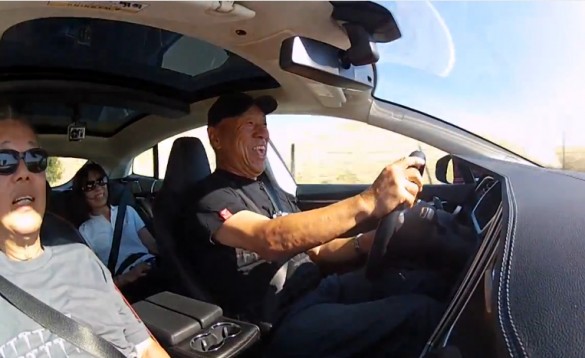 Japan’s Nobuhiro “Monster” Tajima has made a career out of driving insanely powerful cars up mountain roads with zero margin for error. The legendary driver has won at Pikes Peak nine times, including a string of consecutive wins lasting from 2006 through 2011. He was the first driver to break the 10:00 barrier on Pikes Peak during his 2011 run, when the mountain was still a mix of asphalt and gravel.

After four decades of running flat out with little regard for the environment, Monster Tajima has switched to electric-powered race cars, since he sees global warming as a serious threat to the planet. When Tesla Motors asked if he’d like to drive the new, electric-powered Model S sedan, Tajima welcomed the opportunity.

As Green Car Reports tells us, Tajima thoroughly enjoyed pushing Tesla’s latest offering to its limits, even if his passengers weren’t quite so joyful. Tajima praised the car as “well tuned and balanced,” while admiring its “super low center of gravity and concentrated mass.” In his (translated) words, “The quality of the handling is really incredible.”

Tajima capped his visit to Tesla by asking for a free Model S, a request we seriously doubt it will fill. On the other hand, there seems to be a good fit for sponsorship between Tajima and Tesla, so we wouldn’t be surprised to see the Japanese superstar behind the wheel of a Tesla-sponsored electric racer at next year’s Pikes Peak International Hill Climb.