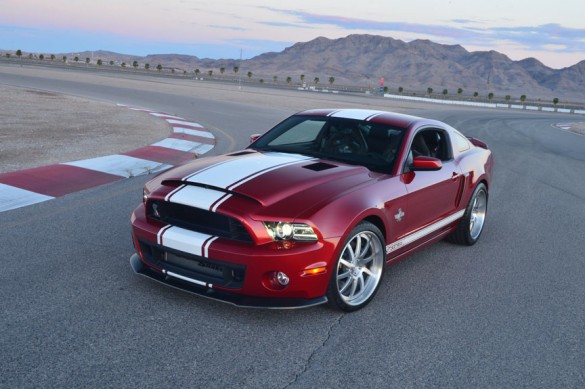 Shelby American previewed its 2013 Shelby GT500 Super Snake at this year’s Pebble Beach Concours d’Elegance, and the company has now released pricing and configuration details for the ultimate Mustang. Since there’s good news and bad news, we’ll give you the bad news first: the $28,995 base price (plus you donor 2013 Ford Shelby GT500) doesn’t include any more horsepower, meaning that you aren’t likely to embarrass any stock 2013 Ford Shelby GT500s at the drag strip.

Just in case 662 horsepower isn’t enough for you, here’s the good news: for a starting price of $39,995 (excluding your 2013 Shelby GT500), Shelby American will build you an 850 horsepower Super Snake. The boost in power comes from a Shelby / Ford Racing supercharger upgrade, which pretty much guarantees you’ll be going through a set of rear tires each month.

New for 2013 is a wide body kit, first seen on the Ford / Shelby American Carroll Shelby tribute car displayed at this year’s Pebble Beach Concours d’Elegance. It certainly does give the GT500 a sinister stance, and it’s how we’d order up our own Super Snake if we had a donor 2013 GT500 plus the additional cost of admission.

Only 500 Super Snakes will be built for the 2013 model year, so if you want one to park in your own garage, contact Shelby American for ordering details.