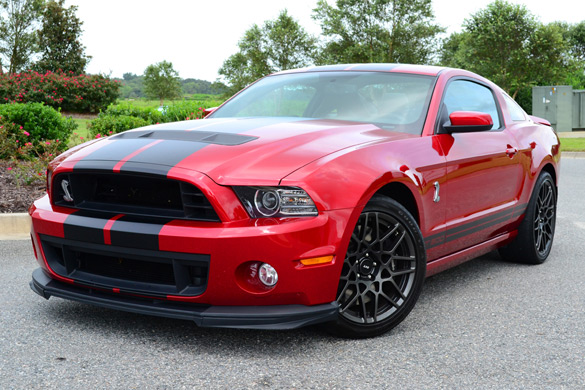 Could you imagine the excitement when I had the chance to drive the all-new 2013 Shelby GT500 packing in a monstrous 662 horsepower and being the last Shelby production vehicle that the late Carroll Shelby was able to sample? It is like a non-stop road-going rollercoaster that only pauses when the gas tank is depleted of its premium fuel – always a big smile on my face.

You would be hard pressed to walk onto a dealership lot and find anything near 662 horsepower without a hefty 6-figure price tag. The all-new 2013 Shelby GT500 is the epitome of an American muscle tradition that has probably reached a paramount in a time when big V8 engines are at the end of their era. For now, we shall let the good times roll on and soak up as much of what the new 2013 Ford Shelby GT500 has to offer. 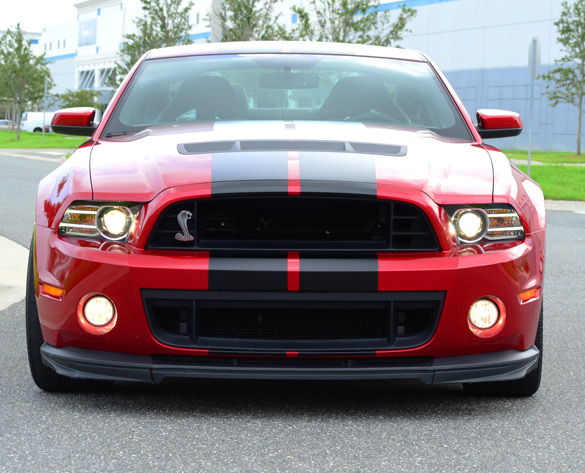 The new 2013 Ford Shelby GT500, interestingly enough to say, isn’t a car for just any enthusiast. It is for the enthusiast who has a live self-conscious of piloting a fun-machine that can instantly turn into a nightmare if they don’t have a certain level of respect for what it can and can’t do. Speaking of respect, the new Shelby GT500 is the king of Mustangs sporting the most powerful production V8 engine around. The new aluminum block 5.8-liter supercharged V8 engine is a masterpiece with a total of 662 horsepower at 6250 rpm and 631 lb-ft. of torque at 4000 rpm. 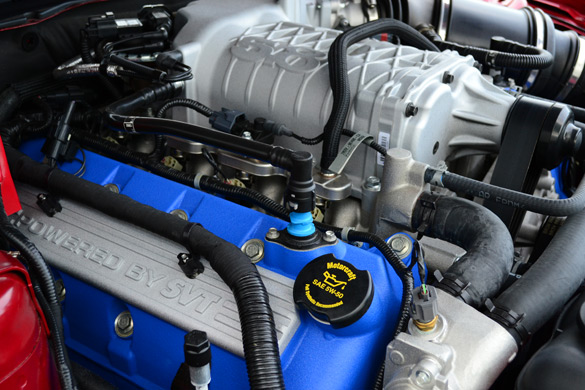 The suspension setup is actually pretty remarkable rivaling the Camaro ZL1’s magnetorheological suspension system. In Normal mode, the GT500 has a civilized ride with excellent dampening over most driving conditions. In Sport mode, the Bilstein dampers are set to an aggressive dampening setting giving the GT500 a harsh and responsive ride but adapted specifically for those track days. Although I did not take the GT500 on a track, I could easily see it being quite a handful even with the Sport suspension setting and traction control left in the on position. 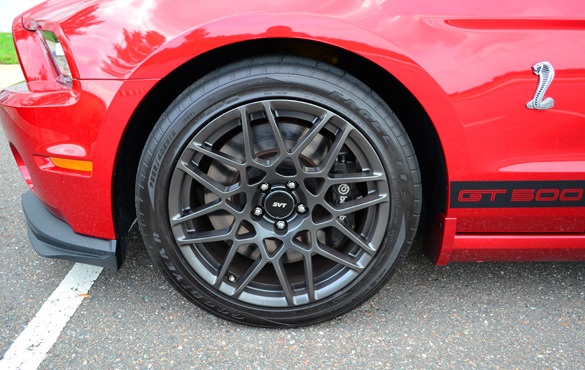 The new Shelby GT500 gets forged 19-inch wheels up front and 20-inch out back wrapped in sticky Goodyear Eagle Supercar G:2 tires, built specifically for the GT500. To put it lightly, the new Shelby GT500 is on the verge of its limits of tire adhesion even with these remarkable tires. Disabling the driver-nannies completely will easily burn up the rear tires all through 3rd gear. Although, the traction control system puts forth its excellent programming as to not instantly sap wheel spin provided it detects the GT500 going in a straight line. A slight bit of lateral slip is allowed, but with 662 horsepower the system is apt to bringing things to a crawl when the slippery rear-end starts to oversteer. 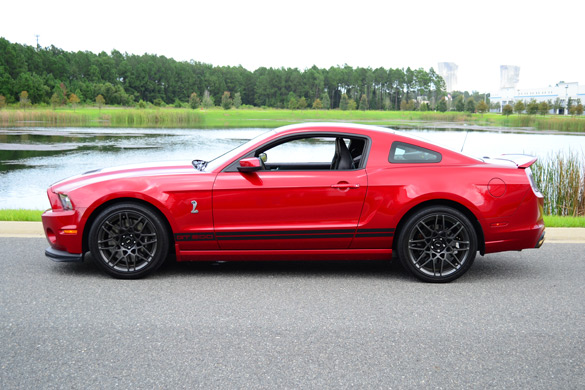 The new Shelby GT500 is fierce in a straight line, however, its tracking ability is diminished by requiring the driver to continually modulate the throttle when hitting twisty roads or track turns. Unlike the GT500’s Mustang Boss 302 sibling, the GT500 has a tender spot with so much available power throughout the RPM band. I would not go as far as to say the GT500 is not a track-worthy vehicle. I would, however, conversely admit that it takes a “seasoned” race car driver to lay down consistent track times. 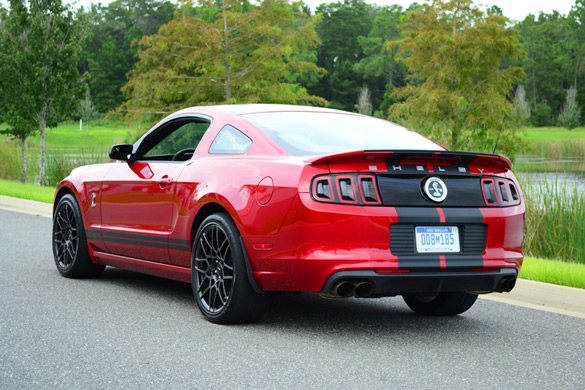 It may be a good gesture for Ford to give new owners of the Shelby GT500 some track lessons before letting them loose on public roads in this beast, which is capable of reaching 60 mph in just 3.7 seconds and run down a full quarter mile in 11.7 seconds at 135 mph. One thing to note, 60 mph can be reached in just 1st gear and the coveted top speed of 202 mph can be reached in 5th gear. I would not recommend trying the latter yourself. Gearing ratios are pretty good with the slight exception of 6th gear. 6th gear is extremely tall, landing the engine at a low 1400 rpm when cruising around 60 mph. 6th is strictly a highway-cruising over-drive gear to help the GT500 achieve its 24 mpg highway figure. City mpg, as expected with a 600+ horsepower vehicle is estimated at 15 mpg but I saw a diminished 13 mpg all day long during my “spritely driving adventures.” At 100 mph, you will be sitting at a nice low 2000 RPM – don’t ask me how I know this, just go with it. In the end, 6th gear is basically keeping new buyers from paying a gas guzzler tax. 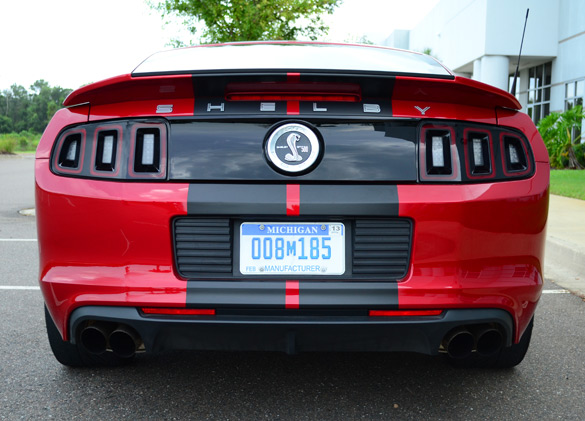 A new Launch Control system, enabled by a dashboard button, allows the driver to pre-set a starting RPM for a virtually effortless mad dash to 60 mph and beyond. With Launch Control enabled, you select 1st gear, lay on the throttle at a stop and dump the clutch letting the ECM unit modulate the throttle and rear brakes to limit wheelspin. The system works well but does require you to dial in the right RPM range for the best launch depending on your surface conditions. You will want to try the system more than once, twice, or maybe even three times selecting different RPM increments. Don’t worry, the beefed up (strengthen case, internal bearings and helix angle of gears changed for handling extra torque) TREMEC 6-speed manual transmission, the only transmission choice for the GT500, and dual-disk ZF clutch with increased clamping load and performance friction material, will stand up to the job just fine. Just be sure to check those 285/35ZR-20 tires in the rear after each run for enough left-over tread. 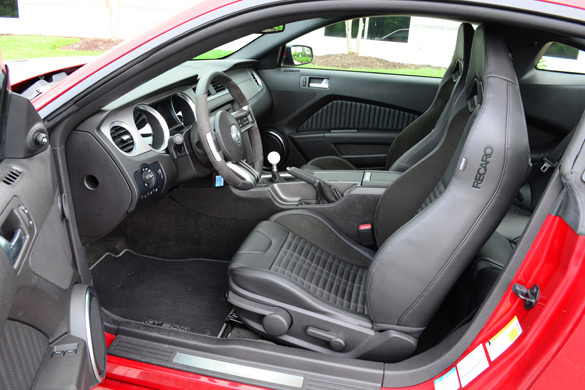 Just like the Shelby GT500 predecessors, the new 2013 GT500 gets proper interior treatment that basically revolves around the optional ($1,595 option) ‘Shelby Man Leather’ Recaro bucket seats. The Recaro seats provide excellent lateral support with appropriate bolsters surprisingly proving to be fairly comfortable on long hauls. The steering wheel is accented with leather and alcantara wrapping. Using Ford’s latest dashboard cluster with center color LCD screen allows the driver to display different live gauges, such as boost, oil temp, air inlet temp and other vehicle information. There are track apps within the LCD screen for timing 0-60 mph, 0-100 mph, quarter mile and even 8th mile times. The track apps even let you record braking distance and g-forces, too. Setting position is a bit too high for my taste but over time you tend to get used to it after your back continually gets depressed to the seat-back after feeling the furry of the supercharged V8. 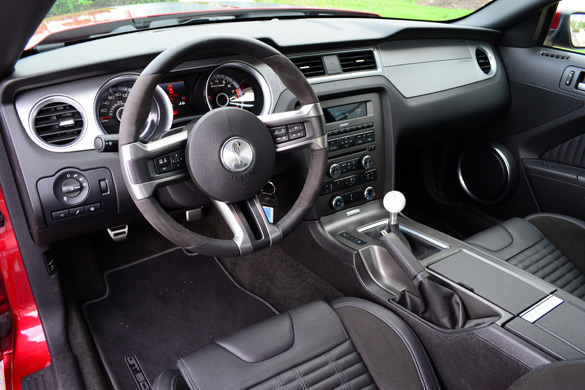 SVT engineers put forth their best efforts to make the new Shelby GT500 a contender in the performance world without bloating the vehicle with unwanted weight. The over-all vehicle weight is down to 3,852 pounds with a 56/44 – front/rear weight distribution split.

On all GT500s you get a light-weight carbon fiber driveshaft (to handle 200 mph and save weight), massive 15-inch Brembo vented brake rotors up front clamped down on by six-piston calipers, and 13.8-inch vented rotors using single-piston calipers in the rear. Pop open the aluminum hood of any new Shelby GT500 and you will take notice to the blue powder-coated valve covers, a large cold-air intake, a massive blower with its pulley wrapped by an extra-wide belt (no slipping here), and the signature of the solo engine builder. 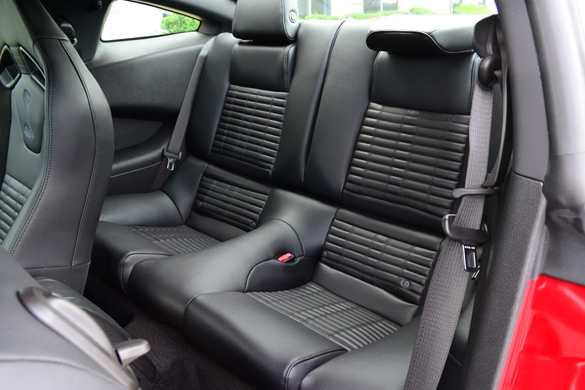 When pitted against the competition, the Shelby GT500 fairs well in a straight line as mentioned earlier. Track affairs will basically come down to drive competency while the GT500’s less-powerful Mustang Boss 302 has more of a track aptitude in comparison. Nevertheless, the new 2013 Shelby GT500 is the most horsepower you can find in a new car at a starting price of just $54,200. Adding the highly recommended track package for another $3,500 still puts this 662 horsepower beast in a horsepower-bargain category.

The new Shelby GT500 may go down in history as we slowly start witnessing an era where massive horsepower numbers are no longer at the forefront of automakers agenda. EPA regulations and greenhouse gas minders will probably see to it that vehicles like the GT500 go the way of the dinosaurs. For the time being; get it while the getting is good, and it is good!