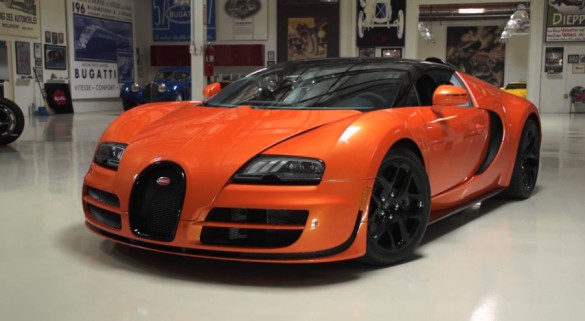 Though it’s hard to believe, the Bugatti Veyron has been on the market since 2005. The original Veyron 16.4 ceased production in 2011, but the car is still being built in Grand Sport convertible form. The highest-performance version of the Veyron currently available is the Grand Sport Vitesse, which is essentially a Bugatti Veyron Super Sport with a removable roof panel for open air motoring.

While base (if such a word can be used in association with the Veyron) Grand Sport models get a W-16 engine good for 1,000 horsepower, Vitesse variants make an additional 200 horsepower. To achieve this 20-percent gain, Vitesse models get larger turbos and four fuel pumps, ensuring that the 8.0-liter engine never goes hungry. Vitesse models also get a body crafted entirely from carbon fiber, instead of the carbon fiber and aluminum construction used on conventional Grand Sport models.

The result is a car that drives substantially lighter than its 4,400 pound weight. As Leno quips in the video, the Grand Sport Vitesse provides “teleportation, not acceleration,” and given the $2,000,000 sticker price we’d certainly hope so. For the lucky few who can afford to buy and maintain a Veyron, no other automobile on the planet is as technologically advanced or as versatile.

We found it ironic that even Jay Leno, who could probably write a check for a Grand Sport Vitesse if he were so inclined, needed adult supervision for the road test. Bugatti sent its North American test driver, two-time Rolex 24 at Daytona winner Butch Leitzinger, along for the video shoot. Maybe it was a requirement from Bugatti’s insurer, but we’re pretty sure we could trust Leno with the keys to any vehicle we could name.