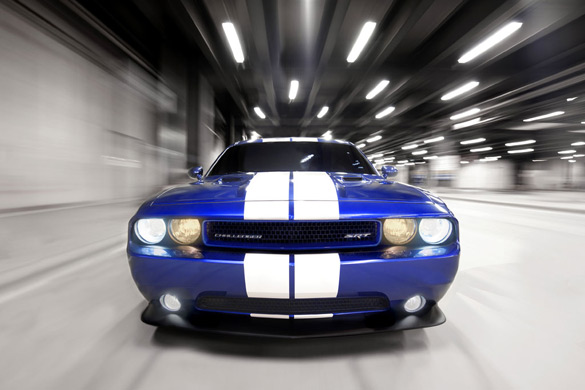 There is no doubt that the 470 horsepower Dodge Challenger SRT8 was literally left in the dust after the introduction of the new Chevy Camaro ZL1 and Ford Mustang Shelby GT500. While it was fair competition for this trio on a level playing field before the 580-hp ZL1 and newest 662-hp Shelby GT500, the Challenger, despite its hefty weight, was an able competitor. With rumors circulating that the SRT brand has something up their sleeves to put the Challenger back into the game with an honest chance, we are happy to reiterate Road and Track’s report of catching a new Challenger SRT8 392 testing while sporting a cover on the front fascia – possibly to cover up some mild changes for a long-awaited Supercharged variant of the Challenger SRT8.

From the spy photos, found on Road and Tracks post, we speculate that this could either be a supercharged Challenger SRT8 or maybe a mule for an upcoming Cuda, resting on the heels of our previous HEMI Cuda resurrection report.

Either way, it is likely that what we see in the spy shots has something all-new under the hood with some more power. It would only make sense, while the horsepower wars are allowed to commence before strict EPA regulations put an end to the fun, that SRT have one last hoorah for the American muscle car battle with something that will at least keep up with its direct competition. We are sure to see something come out of these spy shots during the 2013 Detroit Auto Show in a few months. Stay tuned!