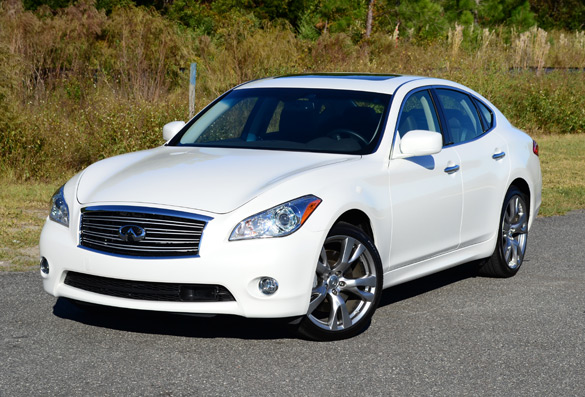 Infiniti continues to polish its luxury and inspired performance branded name in America. With vehicles like Infiniti’s flagship M37, M35h (hybrid) and M56, the luxury sedan segment gets an extra dose of what is perceived as more sport than luxury for some. Regardless, the all-new Infiniti M37 is one vehicle that must never be overlooked when seeking a well-rounded luxury sedan serving up refinement, quality fit and finish, and an over-all sporty aptitude.

I spent a week with the new 2013 Infiniti M37 equipped with just about every option available. In the tried and true VQ series 3.7-liter V6 engine, the M37 hums along with a rather predictable but aggressive attitude on the road. The V6 engine is always eager to direct its 330 horsepower and 270 lbs-ft of torque to the rear wheels through a 7-speed automatic transmission, the only gearbox available for the M series. The M37 is available in an M37x all-wheel-drive configuration channeling power through an advanced torque vectoring system, which can split power from the normal 100% rear-biased power output to a full 50/50 front/rear split. The big V8 M56, with an astounding 420 horsepower, is available in rear-wheel-drive or all-wheel-drive as well. 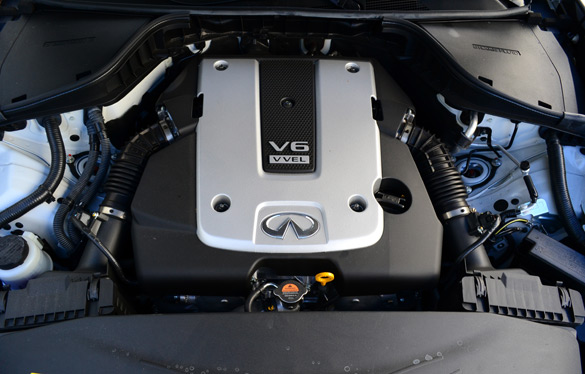 The new 2013 Infiniti M37 remains mostly unchanged from the 2012 model year with the exception of a new Eco-pedal. Out of the box, the new Infiniti M37 gets an EPA estimated 18 mpg city and 26 mpg highway. These are not astonishing figures by any means, however, the Eco-pedal on my loaded-up 2013 M37 test vehicle, as part of the Technology Package, proved to be useful in improving fuel consumption. The Eco pedal basically uses a servo in the gas pedal to push-back as it senses the driver applying what it thinks is an inefficient amount of throttle for accelerating. Additionally, the Eco pedal can be customized with 3 settings, off, soft setting and a full-on setting. The full-on setting is a bit aggressive in its push-back, however, you can always defeat the pedal’s push-back motor by applying more right-foot pressure. The whole experience is rather foreign and you never get used to the feeling. After driving 30 miles straight I was able to best my mileage with 27 mpg on the highway. With the eco setting off, I was only able to see 22 mpg in my mixed highway and city driving while getting a best 24 mpg highway figure. 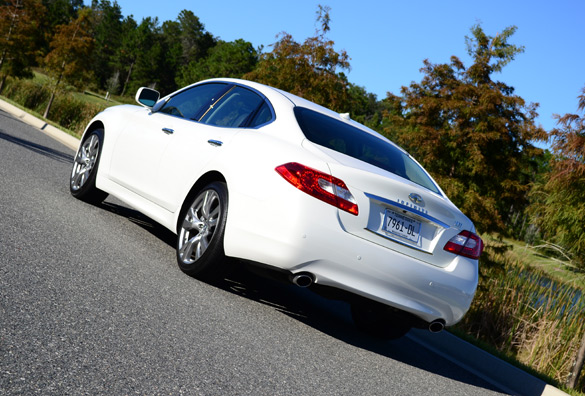 The 7-speed automatic transmission, something found to be common-placed in the Infiniti lineup, can sometimes be a mixed bag of gears. Though in most driving conditions the 7-speed transmission does its job well. However, during some rare demanding times the transmission tends to be indecisive by holding a gear while the V6 engine is required to express all of its low-end grunt. The four different driver modes on the transmission, Snow, Eco, Normal and Sport, all have their own unique shifting patterns. In Snow mode the transmission starts off in 2nd gear while the throttle response is somewhat subdued. Eco mode seems to start in 2nd gear as well with the tendency to shift to a higher gear sooner than anticipated. It is in Sport mode that the 7-speed transmission behaves as it should for a luxury sports sedan not concerned about saving the environment by reducing emissions. Up-shifts feel to be snappier while downshifts are initiated early on deceleration when in the enthusiast-desired Sport mode. 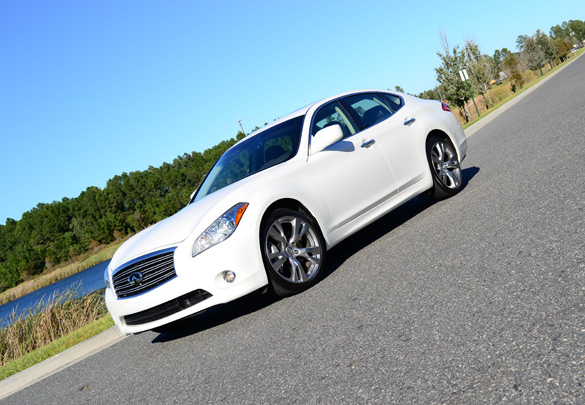 Over-all ride quality of the M37 is good. Without the Sport package, the spring rates are at an ideal position to soak up bumps on poor road surfaces while the dampening is perfectly match to the springs. The optional 20-inch wheels shod in summer performance Bridgestone tires really add to the over-all sports-appeal of the M37. The 20-inchers seem not to add much harshness to the ride quality but really aid in the handling department keeping the surprisingly agile M37 connected to the road. Over-all, the new 2013 Infiniti M37 communicates a much smaller car to the driver giving an ore of extra confidence when pushing the M37 near its limits. Traction and stability control are not overly intrusive, only bringing things to a crawl when it is absolutely necessary. Steering feedback is among the best for larger luxury sedans, which I commend Infiniti for keeping their ‘Inspired Performance’ moniker alive and thriving in this aspect of the new M37 sedan. 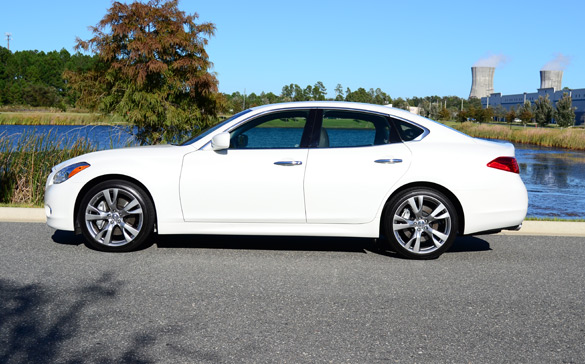 The 2013 Infiniti M37’s sheet metal remains the same from its complete redesign in 2011. The large front grill of the Infiniti M37 sets forth a unique characterization for a luxury sedan but airs a design language found in the full new Infiniti line-up of cars and SUVs. The downfall of the new Infiniti M37’s exterior design is that it clashes with its smaller G37 sedan sibling. This in itself diminishes the unique character of the M37’s looks. Additionally, this takes the head-turning factor of the M37 down a few notches leaving it out in the cold when pitted against its European competitors. 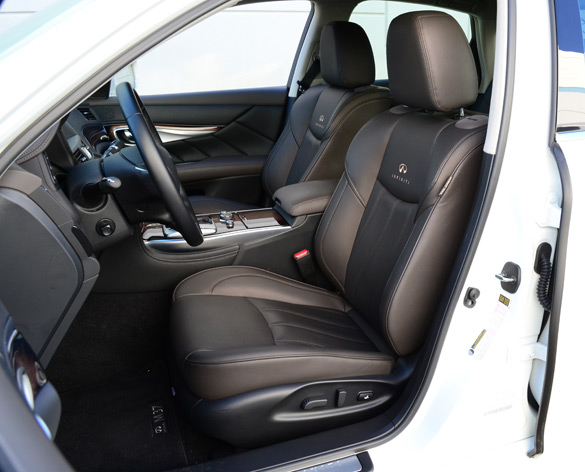 The perception of the value that comes with the new Infiniti M37 comes down to its ease of drivability, luxury-appointed option packages and excellent interior fit and finish. The interior of the new 2013 M37 remains the same as the two previous years. Not much really stands out on the M37’s interior. It is almost safe to say that the interior feels somewhat dated. Conversely, the interior proves to be user-friendly and lavish in the concept of a blind person. 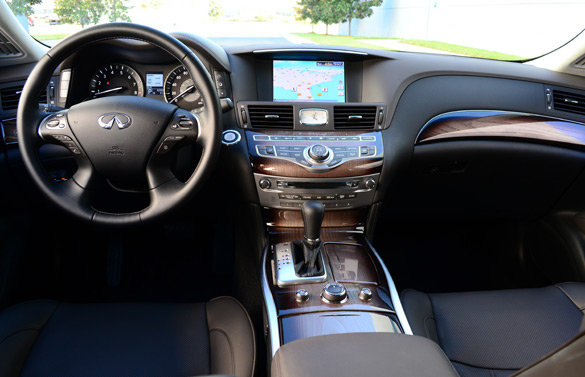 On the plus side of things, when it comes to the new 2013 Infiniti M37’s interior, is its comfortable seats, good seating position, an overshadowed redundancy of controls, and long list of options within a few select packages.

Infiniti has been at the forefront of innovation in safety for the past few years. The new features offered on the new 2013 Infiniti M37 are no different, combining the availability of blind sport monitor w/ customizable intervention, adaptive cruise control, distance control assist, intelligent braking assist, forward collision warning and lane departure warning w/ customizable intervention. 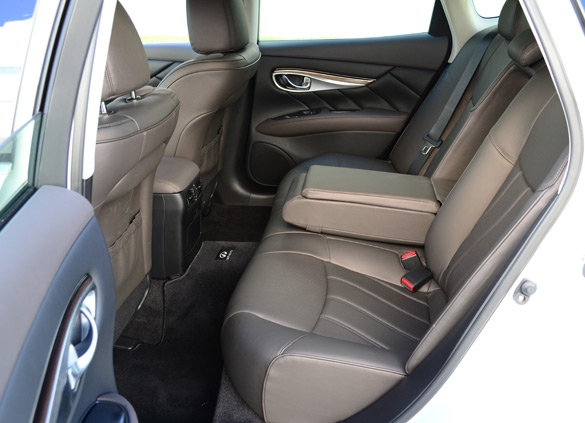 The European competitors within the class of the new Infiniti M37 are prided with their long-time history and name recognition. Infiniti, still being a new kid on the block, has a worthy contending character with new M37 offered as a large luxury sedan to go up against the BMW 5 series, Benz E class and Audi A6. Although the M37 may be considered an underdog among such company, a relatively competitive starting price of $49,095 including a delivery charge of $895 puts it in an attractive position for potential buyers. Pricing for the new M37 can quickly climb to just over $60,000 after adding all available packages including the Technology Package (lane-departure warning and prevention system, blind-spot warning system and a forward collision warning system with intelligent brake assist), Premium Package (hard-drive GPS navigation system w/ real-time traffic and real-time weather, heated and ventilated front seats, a heated steering wheel and a 10-speaker Bose stereo with streaming Bluetooth audio and digital music storage), and a Deluxe Touring Package (power rear sunshade, in-car air purifier, upgraded leather upholstery and interior trim, 16-speaker Bose surround-sound stereo system). With all of these options and 20-inch wheels w/ summer performance tires and performance brakes (4 piston calipers front and two piston rear), my 2013 Infiniti M37 came to a price of $61,845.