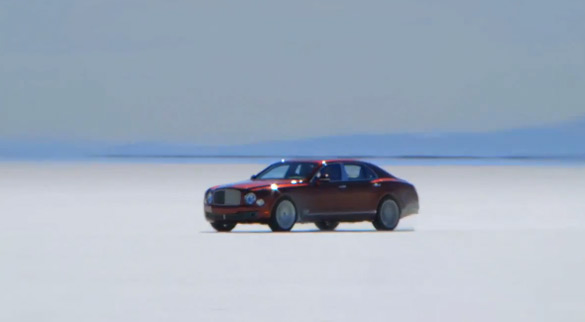 At the home of land speed records, Andy Green pilots a new Bently Mulsanne pushing 200 mph, an easy feat for a man who has traveled 763 mph on land. If you know who Andy Green is, holding the 763 mph land speed record, then you know 200 mph is a bit of an anticlimactic event for him considering he wants to be the one to eventually break the 1,000 mph boundary.

The video below is a lead-on for the future of speed. The Bentley Mulsanne is just one rather fine example of the major achievements in technology and how it has set our eyes on an even broader horizon into the future. With what Andy describes as silky smooth ride at triple digit speeds, is powered by a 6.8-liter Twin-Turbo V8 with 506 horsepower and 752 ft-lbs. of torque channeled to the rear wheels through an 8-speed automatic transmission. Hi up the jump below to check out Green and his descriptive venture near 200 mph in a $290,000+ Bentley Mulsanne on the Salt Flats.