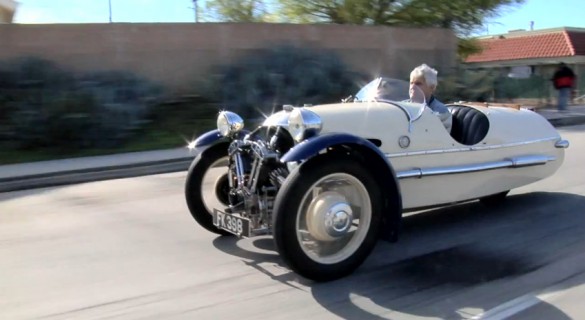 In 2012, the Morgan Motor Company re-introduced a three-wheeler to its lineup for the fist time in over seven decades. Originally intended as a more affordable alternative to a traditional four-wheeled automobile, three-wheelers added a bit of fun into the mix, at a time when “driving enjoyment” was the lowest priority on a vehicle shopping list.

Need proof? Leno calls his Morgan Three-Wheeler “one of the oddest and most fun cars I have,” and coming from a guy with Leno’s car collection, that says a lot. He also equates it with flying a World War I biplane, which is all the selling we need to know we’d have a blast behind the wheel.

Leno’s Morgan was designed in 1932, but assembled in 1946. Equipped with a 990cc Matchless motorcycle engine rated at just 42.1 horsepower, acceleration is hardly up to supercar standards. Still, the Three-Wheeler’s light weight helps with performance, and its top speed of 80 mph “feels like 180 mph” according to Leno.

Are there drawbacks to a Three-Wheeler? Yes, and plenty of them. Missing a pothole with the front wheels ensures you’ll hit it with the single rear wheel, and the car’s awkward cloth top doesn’t exactly make the Morgan weather-proof (or even weather-resistant, as far as we can tell). While the design may have been a utilitarian compromise for 1930s British families seeking economical motorized transportation, the Morgan Three-Wheeler (even in its modern incarnation) is best reserved for sunny-day amusement.