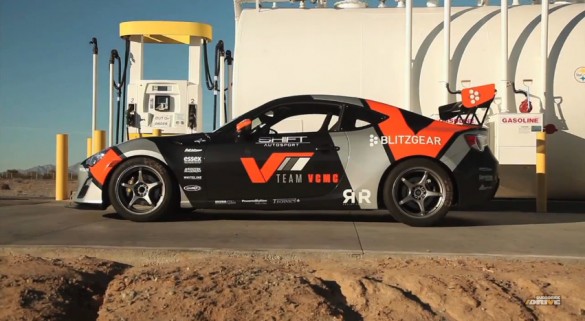 While we like the Scion FR-S and its fraternal twin, the Subaru BRZ, as much as anyone writing about cars, we’d also admit that we’d like it even more if it had more power. Despite a 30+ horsepower advantage over the Mazda MX-5 Miata, the Toyotabaru coupes feel slower to us, and – dare we say it – less precise.

That’s what the aftermarket is for, and to be fair, the Scion FR-S was always intended to be a blank canvas. Give enthusiasts a solid (and affordable) base to build from, and the end result is limited primarily by budget and imagination. The FR-S built by VCMC and Shift Autosport for Canada’s Scion Tuner Challenge is a prime example of this, as the end result is both fast and relatively affordable for a race car.

How fast? Farah doesn’t spit out numbers like 0-60 or lap times, but he does give it praise for its velocity and its balance, and Matt Farah is a guy you can trust behind the wheel. Thanks to a Full Blown Motorsports turbo kit pushing nine pounds of boost, the engine is putting out some 350 horsepower, which translates to about 320 at the rear wheels. “Run more boost,” most people would say, but that is going to impact engine life unless you beef up the internals. Besides, more power translates to more heat, and this particular FR-S still needs development work in the cooling department.

As for the “how expensive” part, the car costs around $25,000 new, and the engine, aero and suspension work have added roughly $20,000 to the tab. If you’ve priced new race cars lately, for any class, you’ll understand how much of a bargain this car really is.

We completely agree with Farah on one other point, too – the Scion FR-S and the Subaru BRZ are indeed destined to become the next spec racer craze, at least until Mazda moves forward with the next generation of MX-5.