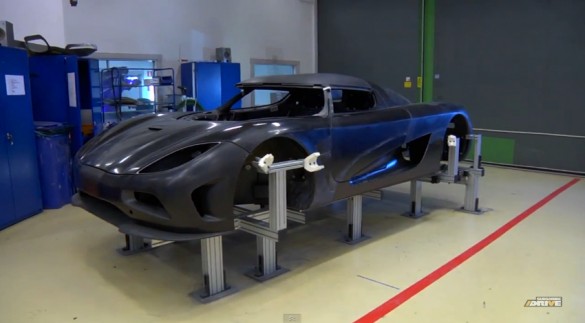 In case you missed last week’s teaser, “Inside Koenigsegg” is a nine part series, airing on Drive and hosted by the company’s founder, Christian Von Koenigsegg. The videos promise to give a look behind the scenes at one of the world’s premier supercar builders, but will also explain how technology developed for the Agera R trickles down to more common uses.

Carbon fiber is used extensively throughout the Agera R, as it’s lightweight, strong and (important for chassis development) extremely rigid. Koenigsegg claims that his cars are the most carbon fiber-intensive production vehicles built today, as over 400 parts are built using the exotic and expensive material.

Creating a component from carbon fiber sheeting is a labor-intensive process involving the layering of carbon fiber sheets inside a mold along with various films and materials meant to evenly distribute pressure or vacuum. Once the part is layered up, heat and pressure (or vacuum) are used to consolidate the layers, and Koenigsegg describes the process as a “black art.” His company has been perfecting it since 1994, so we’d say that’s an educated opinion.

When properly molded, carbon fiber parts offer a strength to weight ration like few other materials on the planet. Make an error in the manufacturing process (unlikely, given Koenigsegg’s experience) and the part can be weak and brittle, failing at the worst possible time. In other words, there’s little margin for error.

Over the next few years, you can expect to see carbon fiber parts begin to make their way into more and more production cars. Until someone figures out a way to automate the production process, however, the material isn’t likely to be inexpensive to produce.