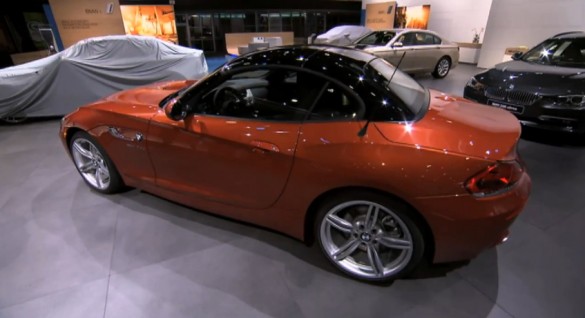 One of the best perks of writing about cars is getting into auto shows before the general public. If you’ve even been to a big auto show in a major city to actually research a specific car, you know what a hassle it is to wait behind a gaggle of 8 year-olds, who are gleefully tearing apart the interior of the car you’re actually shopping for, as dad documents the carnage with a camera for the relatives to laugh at. It’s funny, because it isn’t HIS car the kids are wrecking.

In this short video, Horatiu Boeriu of BMW Blog takes us behind the scenes at BMW’s Detroit Auto Show booth. Key highlights include a restyled Z4 (which looks hot in Valencia Orange with a black roof), the M6 Gran Coupe and the new 4 Series coupe. If you’re wondering exactly what the 4 Series is, it’s just a new naming convention from BMW. Moving forward, the 3 Series name will be used on sedans and station wagons, while the 4 Series name will be used on coupes and convertibles. The 4 Series coupe, then, is just the new 3 Series coupe with a more descriptive name.

While BMW stops short of saying the 4 Series will come in an xDrive version, it’s logical and safe to assume such a car will follow the rear-drive version to market. The same applies to the use of in-line six-cylinder engines instead of just turbocharged fours; by pointing out that the hood length allows for the use of the larger engine, BMW is telling us to expect it. As for design, expect the production 4 Series models to closely match the styling of the concept seen here.