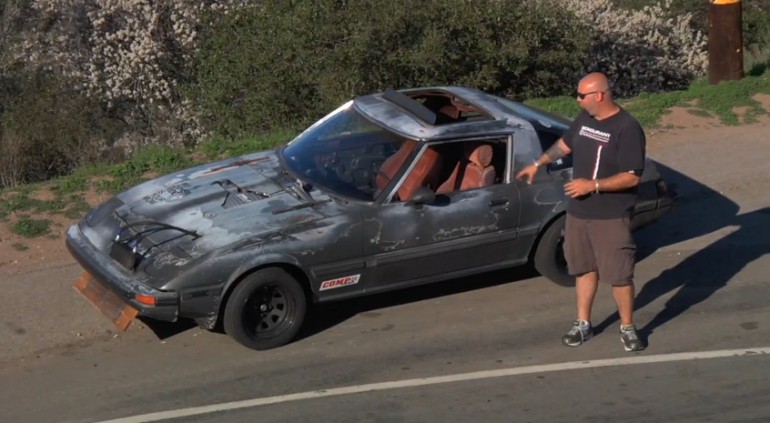 In Corbin Goodwin’s view, hot rods are all about rebellion. By that definition alone, his highly-modded RX-7 rat rod certainly qualifies; if the rusted paint and bodywork-by-sawzall-and-home-depot aren’t enough to offend you, chances are the “Free Candy,” Pedo-bear or “My other ride is your mom” stickers will do the trick.

Even if you don’t see the car, hearing the barely-muffled roar of its 400-horsepower, 5.0-liter Ford V-8 is enough to shatter the calm silence of a sunny Malibu afternoon. Love it or hate it, you certainly aren’t going to ignore Goodwin’s in-your-face ride.

Wanting something he could run up and down the canyons, “something that would try to kill me at any opportunity,” in his own words, Goodwin’s ride began its transformation as a $350 Mazda RX-7. Performance-wise, the car rocks the aforementioned 5.0-liter V-8, rides on a coilover suspension and wears DOT-legal race tires that don’t deliver much traction when cold. Or wet.

Yes, that’s an oil cooler levitating off the front bumper, and yes, that is the car’s speedometer hot-glued to the hood. In the interest of safety, luminescent paint is used to mark speeds for night driving, and the car does come equipped with a fire suppression system. Improvisation is key; when the stock fuel gauge stopped functioning, Goodwin simply replaced it with an ohmmeter from Harbor Freight; the next step, of course, was learning how many ohms meant a full tank versus an empty tank.

Like the cars that began the hot rod craze in the 1940s and 1950s, Goodwin’s car is equal parts high-performance and single-digit salute. It may not be our taste in rides, but we can certainly appreciate it for what it is, and recognize the genius behind it. The car may be Goodwin’s first build, but we suspect it won’t be his last.