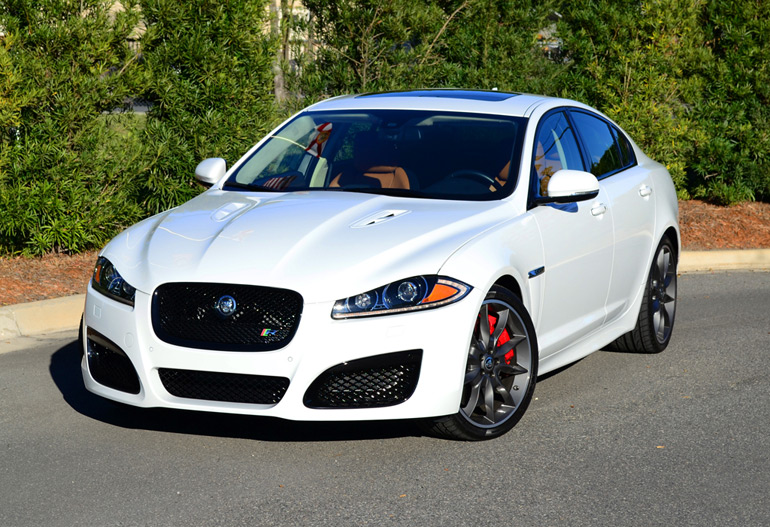 When it comes to a menacing cat, the new 2013 Jaguar XFR is the one to not only claw its way to the front of the pack, but it is the one to do it with grace and delectable purrs all the while transporting its precious cargo in luxurious style. The all-new 2013 Jaguar XFR begs to be the cat with an attitude clothed in an appetizing but aggressive exterior poised to take on brutes with bigger power numbers.

Wielded at the direction of the driver, the Jaguar XFR can easily be transformed into a snarling cat ready for his/her’s next meal or one that quietly purrs like a kitten. With a fierce 510 horsepower and 461 lb-ft of torque supercharged 5.0-liter V8 engine, the new 2013 Jaguar XFR captivates curious enthusiasts. One thing remaining in the Jaguar DNA is its intriguing styling leaving some with a curiosity that could get the best of them after unleashing what is a cat transformed from subdued to a vicious hunter at the mercy of a firmly planted right foot. 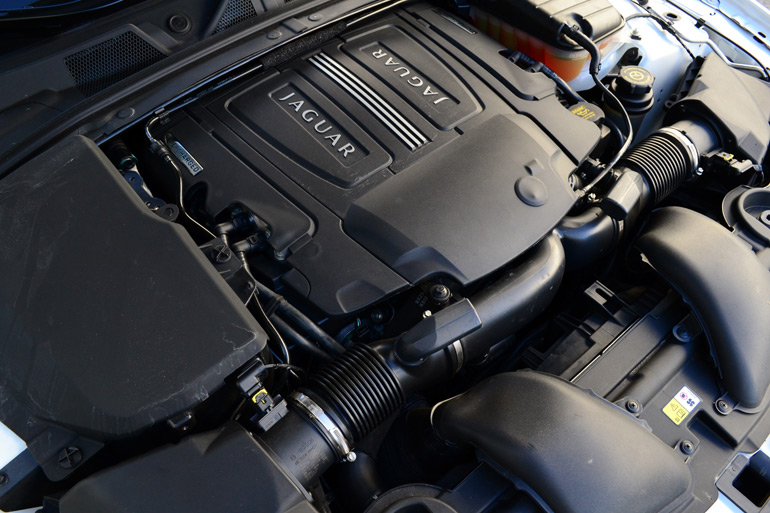 The new 2013 Jaguar XFR takes the XF sedan to soaring heights with a supercharged V8 and the chassis dynamics fitting to keep all 4 paws clawing the pavement in an orderly fashion. The new Jaguar XFR isn’t just additional horsepower over the 340hp Supercharged XF V6 or the 470 hp Supercharged XF V8, but it is a new-found character in the tuning of the adaptive suspension and larger brakes along with some added exterior styling. 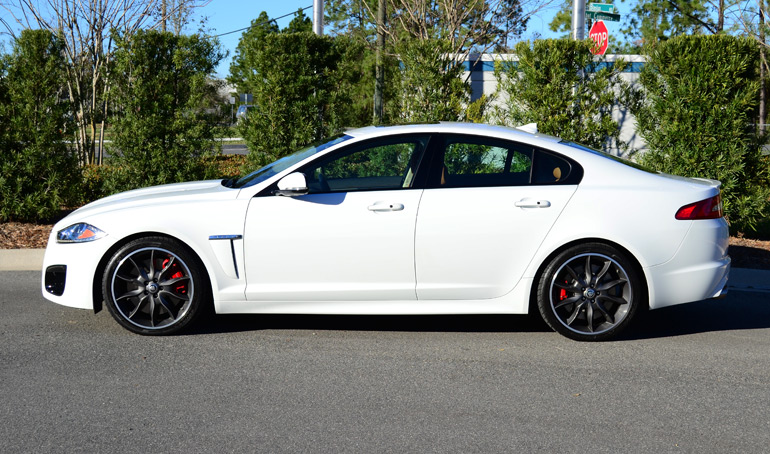 Driving the new 2013 Jaguar XFR is like wrapping up all trim levels of the prided XF mid-sized luxury sports sedan into one package – but giving it a broader expression in its expanded performance-oriented aptitude. The driving dynamics are plenty capable to take on direct competition on the road or track. The rear wheels easily break loose while traction control minimally intrudes. The growling exhaust note under mid to full throttle is intoxicating. Braking comes on strong with no noticeable fade. The rear end easily kicks out where the XFR can have an abundance of oversteer if you purposely disable stability and traction control. In a way, the XFR is an absolute handful and some when pushing it near the limit on the confines of public roads. To some this is a good thing, to others, well, they should just leave the driving nannies on. 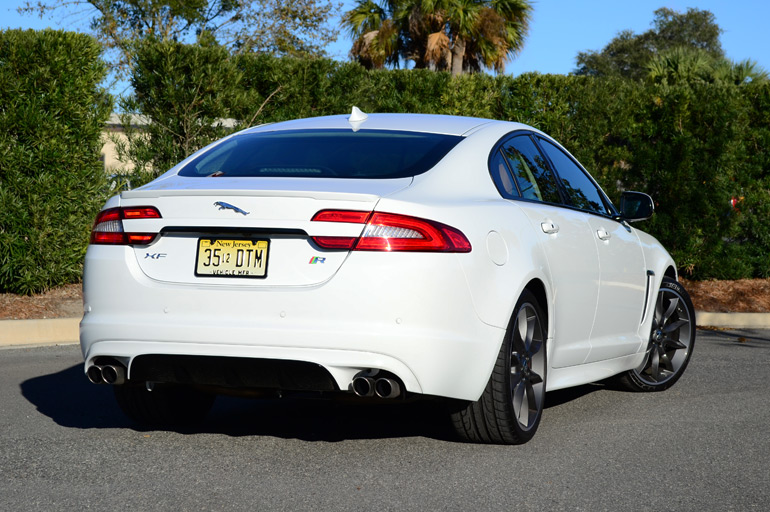 Directing its 510 horsepower to the rear wheels through a well-adapted 8-speed automatic transmission is a seamless mission for the mechanics of this Jaguar. The transmission provides quick up and down shifts in both normal and dynamic modes. In Dynamic mode, the transmission shift patterns are only slightly remapped while the active dampers firm up to keep the body motion to a minimum. Rising out of the console during startup of the vehicle, the XFR’s 8-speed automatic shifter has a special treat in the form of a sport mode. In the sport mode, the transmission holds onto lower gears longer and proves to provide adapted rev-matched down-shifts. Sport mode for the transmission is also a means of using the steering wheel-mounted shift paddles for those times you really want to explorer what this purring cat can do on pavement.  Speaking of purring, the new Jaguar XFR hones in on its target much like the exotic cat it is named after when seeking its prey, reaching 60 mph in just 4.5 seconds.

Fuel consumption for the new Jaguar XFR remains near the XF Supercharged V8’s 23 mpg highway figure but gets a slightly lower city mileage at 15 mpg. During my time in the Jaguar XFR test vehicle, I saw as much as 22 mpg on the highway and an average of 16 mpg in the city. In retrospect, those numbers are not too bad for a vehicle having over 500 ponies. 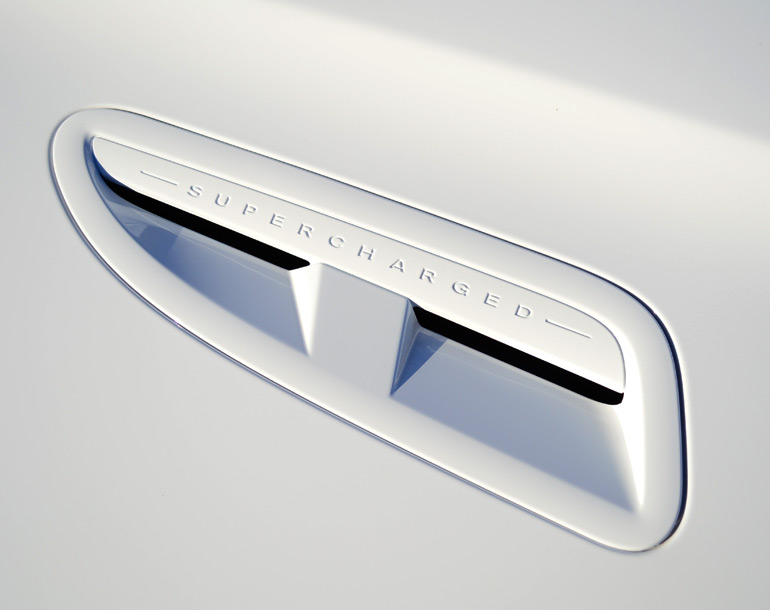 Never does the XFR depart so far from what is enjoyable in the XF, including all of the available luxury amenities and safety blanket features to ensure all 5 occupants bask in the lap of luxury. Though the Jaguar XFR can get you to where you need to be quickly, it does it with civility. One of the only few give-ways of the Jaguar XFR’s performance edge, other than the obvious 510 horsepower awaiting to pounce on the road, is the firmly dampened suspension and somewhat aggressive exterior styling. 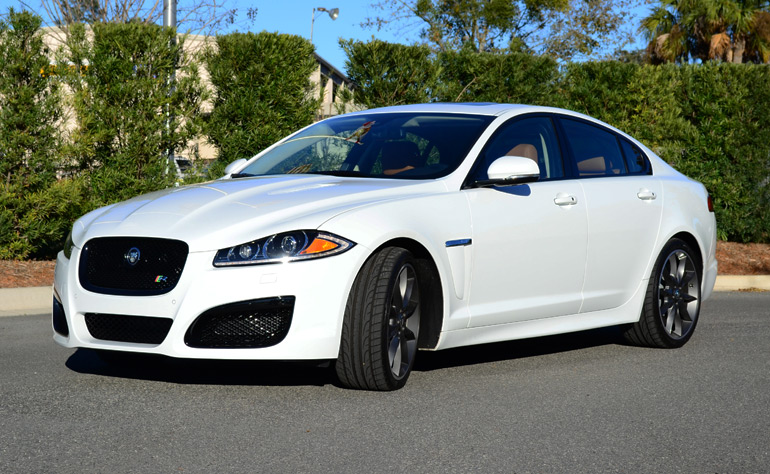 The exterior of the new 2013 Jaguar XFR takes the XF sedan’s character and adds an aggressive edge proving to be sporty yet functional. The lower darkened bumper grills are opened up for additional airflow to supercharged V8 heart along with side and hood vents. The rear quad exhaust pipes and darkened diffuser also add a functional performance character to the XFR. The rear and front grill “R” badges signify the XFR’s depart from a normal XF sedan if the other exterior traits don’t do it for you. Additionally, the new Jaguar XFR gets 20-inch seven twin-spoke alloy wheels wrapped in summer performance tires. The rear trunk lid gets an aero spoiler while the massive brake calipers can be had in a painted red accent color such as found on my test vehicle.

The exterior lighting of the new Jaguar XFR combines all LEDs with the exception of the bi-xenon headlamps. Daytime running LEDs accent the XFR’s headlight cluster for a signified look when this cat prowls down the street. Front and rear visibility is good even with the stylishly shaped rear window silhouette. 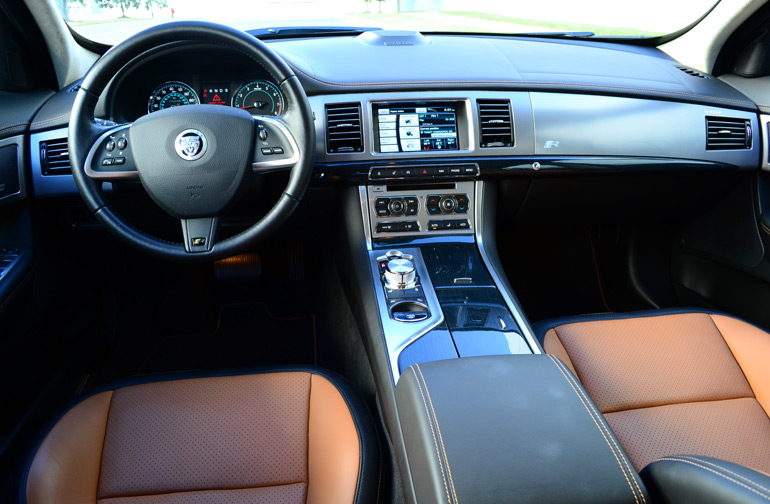 The cabin of the new 2013 Jaguar XFR characterizes itself apart from other like vehicles, quite customary to the Jaguar name plate. As an XF sedan trait, the interior vents power-fold automatically when the vehicle is shut off. This feature is more of an aesthetic novelty but nevertheless adds a unique character to the XF vehicles. The leather appointed seating surfaces are soft while the 18/14-way power, heated and ventilated front seats provide ample bolstering as should any car with a high performance caliber. 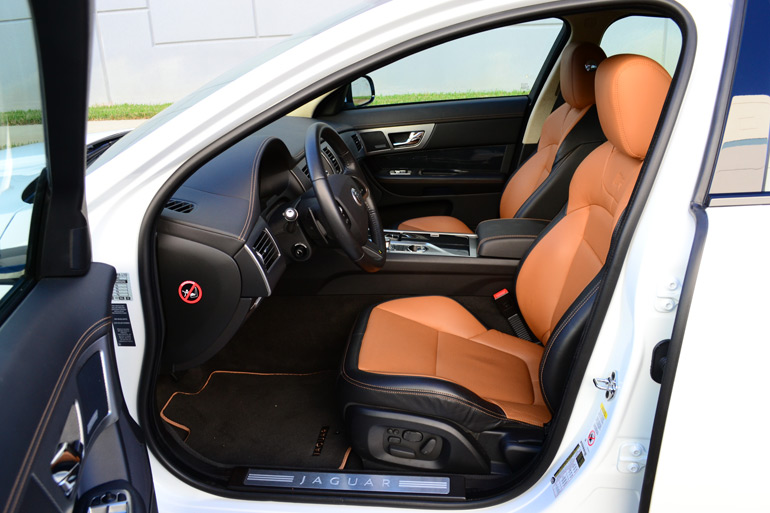 Just like the XF sedan, the XFR exudes quality interior craftsmanship with many soft-touch areas and buttons with nicely accented aluminum trim areas for an inviting cabin. The infotainment system has been improved upon from previous years but still has a slight lag in response, which can become aggravating at times. The center color LCD touch-screen and navigation system dominate the center dashboard but keep the design and button structure simplistic. Due to the somewhat lagging response and antiquated menu structure, Jaguar’s infotainment experience in the XFR falls a little behind in innovation and user-friendliness when compared to the competition.

The dashboard gauge cluster is a nicely contrasted and modern part of the XFR’s interior. Jaguar manages to keep some of its traditional gauge design in the cluster while a color center LCD reads out vehicle status information and settings. All together with the motorized vents and transmission shifter, the Jaguar XFR goes a good job at welcoming its driver and front passenger to the elegance of its finely crafted interior. 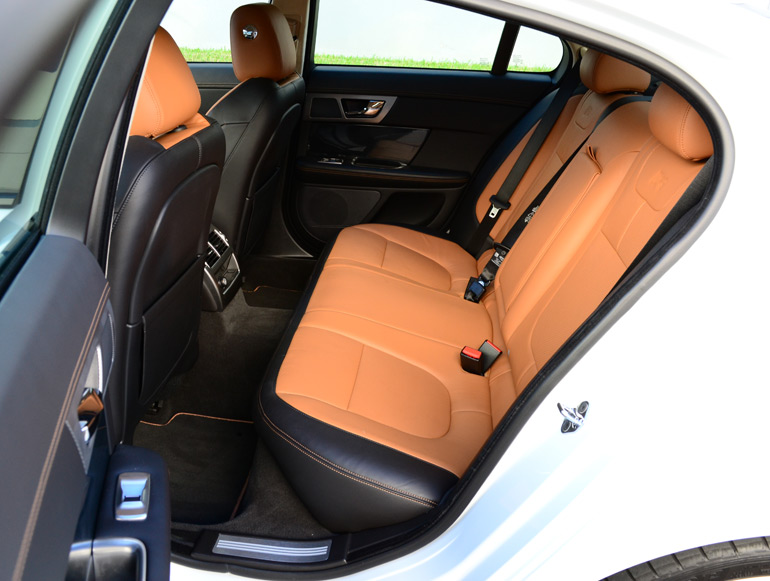 The new 2013 Jaguar XRF starts at a competing $83,200 getting you a personalized, luxurious and near-extreme performance minded sedan. Adding on optional packages such as adaptive cruise control, Speed Pack (raises top speed to 174 mph) can quickly bring the price to just over $89,000. The new 2013 Jaguar XFR, surprisingly, does not top the XF range. A new Jaguar XFR-S is a new cat in town available this spring adding an extreme performance attitude to the XFR’s equation with a total of 550 horsepower and slightly faster 0-60 mph time. Opting for the extreme XFR-S will add on another $16,000 to the base price tag of the new XFR.