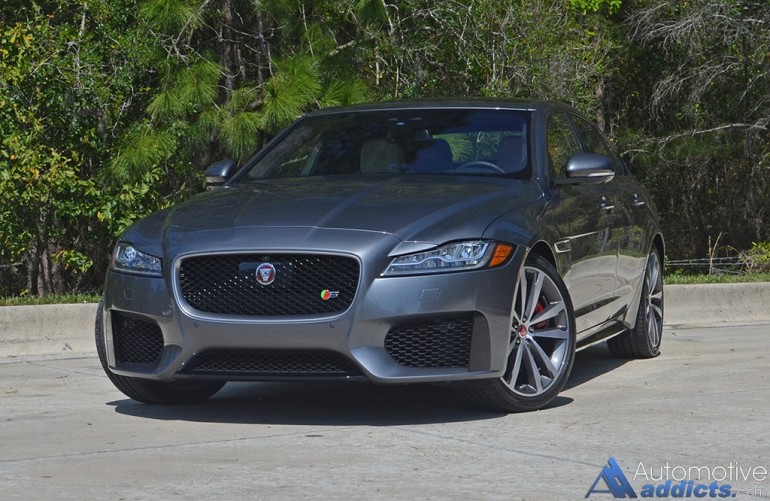 To balance on a slanted keel that is known as the somewhat despairing growth of the midsized sedan segment, Jaguar is committed to focusing on what matters when it comes to its XF sedan. Continuing off of the complete redesign for the 2016 model year, the 2017 Jaguar XF remains unchanged but now makes available a diesel powertrain at the base trim levels.

Diving into my recent journey with the new 2017 Jaguar XF S AWD sedan, many of the expected British-esq traits can be found in a nicely pieced together luxury sports sedan. At the top of the trim level, my XF S AWD test vehicle captivates with a sharp design embodied in a structure mostly derived from lightweight but high strength aluminum. Improving upon the outgoing generation, the new XF brushes up on mostly all aspects of what made it a unique luxury sedan in the first place. Surprisingly, Jaguar does away with the Supercharged V8-thrashers you once found in the XFR and XFR-S and make due with a more economical but decent-performing Supercharged 3.0-liter V6 engine in two flavors, one with 340 horsepower, and the 380-horsepower variant only reserved for the XF S trim. 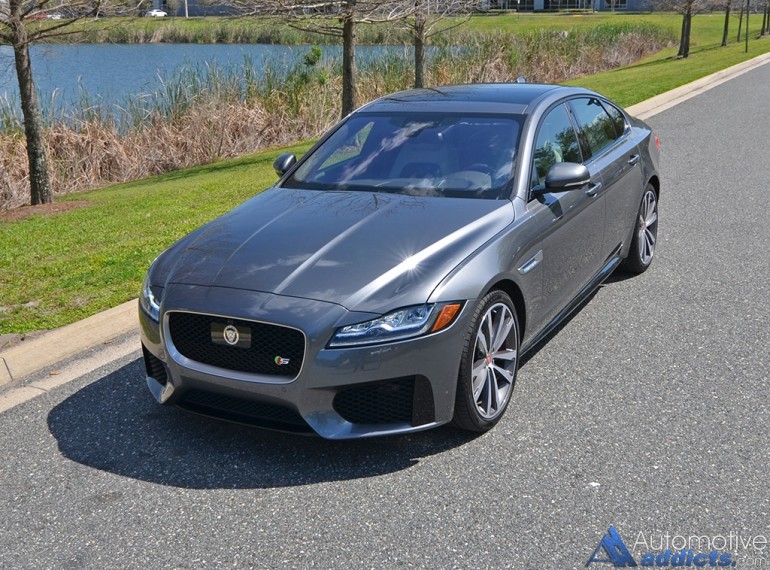 The Supercharged 3.0-liter V6 engine tuned to 380 horsepower at 332 lb-ft of torque in my Jaguar XF S AWD test vehicle makes for a respectable powertrain mated up to an 8-speed automatic transmission. The 380 horsepower is just enough to keep the Jaguar entertaining to claw at the pavement at all fours with mostly predictable acceleration. The dynamics of the improved upon chassis and adaptive dampers in the XF S AWD trim further balance the pouncing midsized cat but leaves a little bit more to be desired for those who are inclined to cross-shop V8-powered competition. Still, the XF S AWD is a convincing case considering its respectable price point well below 70K, which includes many creature comforts expected in a premium midsized luxury sedan, in addition to the advanced safety features and amenities found on my loaded-up XF S AWD test vehicle. The driving character is more in the middle row for what you expect from German rivals exuding a smooth and composed ride quality, and a confidence-inspiring sense of stability at highway speeds. Even the overall steering feel is good with just the right amount of effort but lacking much feedback from the road. 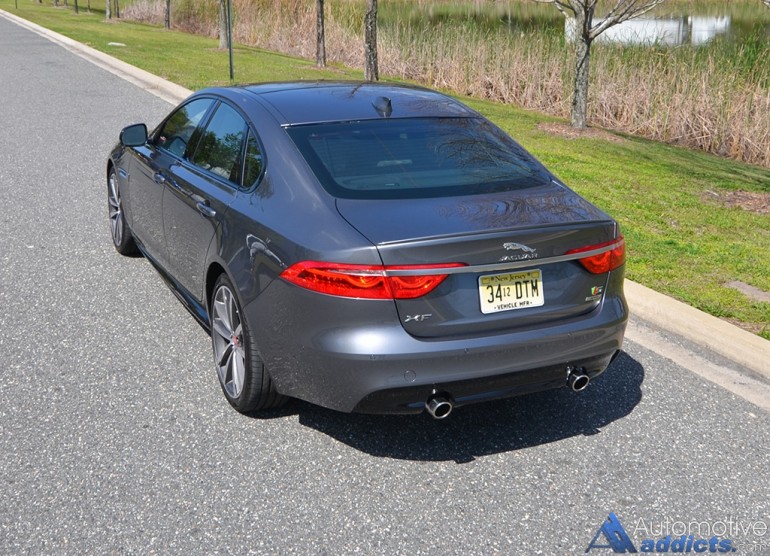 Using one of the three drive modes (Dynamic, Normal, Eco) permits a subtle change in driving dynamic whereas the Dynamic mode stiffens up the dampers, advances the throttle input, sharpens up the shift points, and adds weight to the steering effort. Surprisingly, with a change from Normal to Dynamic mode, most of the driving character only changes slightly. In Eco mode, things tend to change more drastically with relaxed throttle inputs and early transmission gear shifts to conserve fuel. One could leave the vehicle in Dynamic mode and never have any complaints about anything being too aggressive, which is my preferred drive mode. 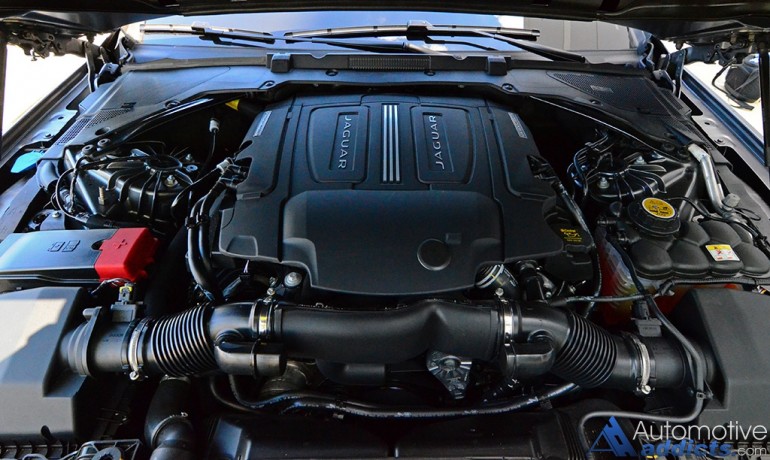 The Jaguar XF S AWD with its more-powerful Supercharged V6 engine still manages to remain rather somewhat efficient getting an EPA-estimated 20 mpg city, 28 mpg highway, and 23 mpg combined for the all-wheel-drive setup. Getting the same engine with rear-wheel-drive will slightly improve upon those figures to get 20 mpg city, 30 mpg highway, and 24 mpg combined. The annoying engine start-stop feature doesn’t appear to do much for improving fuel economy. In my opinion, I believe it’s just there as an annoyance or a reminder to put your cell phone down and drive.

Jaguar’s inspiring design goes the distance and has become quite recognizable as one of the better-looking vehicles on the road today. The XF’s new design matches such a theme and makes many of its unique design lines a bit more defined. Outside of the top-trimmed XF S AWD, you will find stylish 20-inch alloy wheels, sharp and bright LED headlights with signature LED daytime running lights, a prominent grill encasing a glass emblem lens for the adaptive cruise and forward collision radar, and LED taillights that embody a signature design found in other Jaguar vehicles. The elongated body style of the new XF takes subtle cues from its larger XJ sibling, which is a good thing to set it apart from other midsized sedans. IN all, the design of the XF S blends well with other luxury sedans but can somewhat get lost in translation as just another 4-door luxury car that does exactly what it’s supposed to and nothing else. 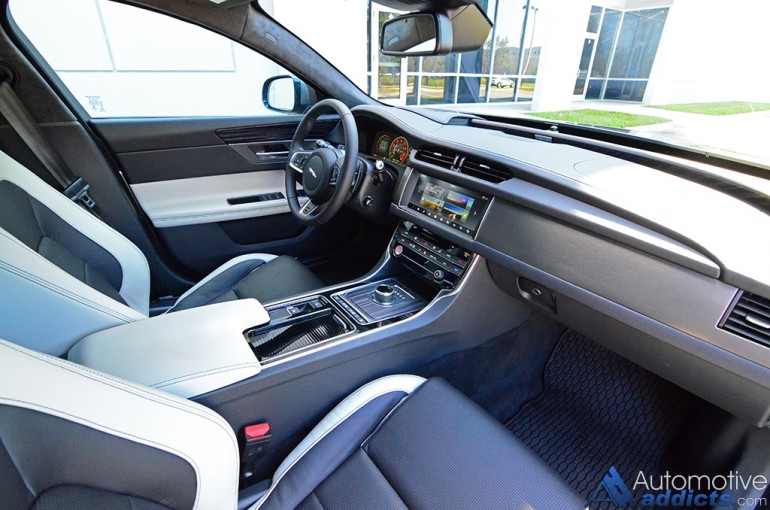 Inside of the new Jaguar XF is home to a very British-like interior design with many soft-touch surfaces where they matter. However, lower portions of the interior are a few unexpected hard-touch areas. Overall, the plastics, aluminum, and the stitched soft-touch areas never look overly cheap, so they all fit the luxury mold of what Jaguar is attempting to pull off in a respectively-priced midsized luxury sedan. The seating areas are somewhat improved upon with additional room in nearly all dimensions and the latest heated 14-way power adjustable “S” sports seats up front as part of the XF S trim level get a nice contrasting leather color treatment and perforated leather inserts, which provide decent support and comfort. 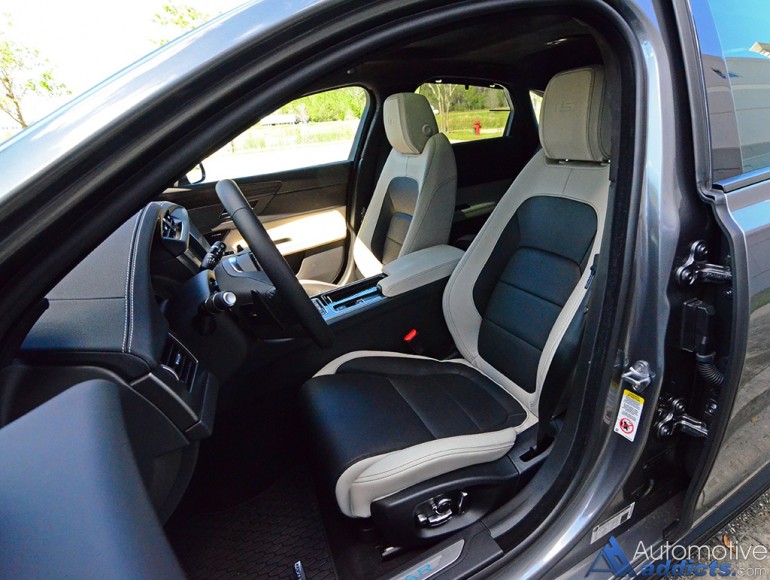 Jaguar, being left behind in the area of an advanced infotainment system, attempts to make up ground with a revamped touchscreen interface. The latest infotainment system tries hard to gain ground but still lacks with intuitiveness. However, the system responds quickly to inputs and gets some of the basics right. I still found the infotainment system to be riddled with occasional hiccups and system faults that sometimes required the vehicle to be restarted. Otherwise, the menu sets and controls are relatively easy to navigate once you become acclimated to what is a unique setup that uses swipe, drag and pinch gestures much like your modern-day smartphone or tablet device. The few physical buttons are welcomed for the front dual-zone climate control system, as are the buttons accessible to rear passengers for their additional two zones. 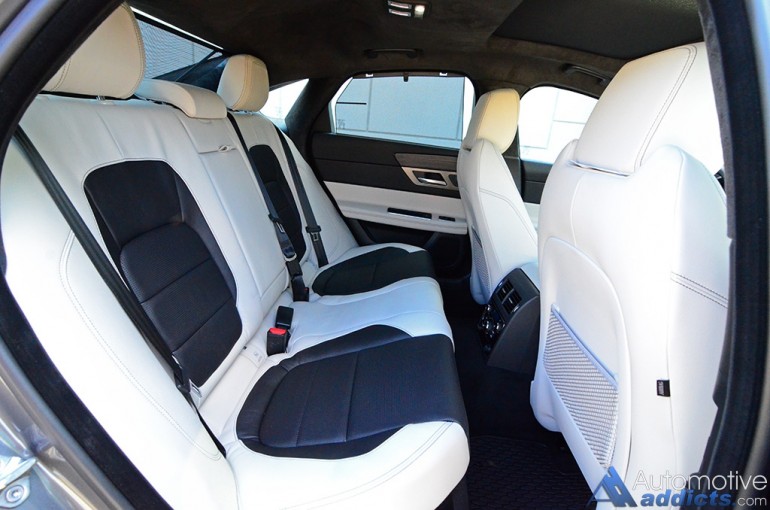 The Jaguar XF isn’t as outlandish as it may have once been considered, such as in the Supercharged V8-powered XFR and XFR-S trims. The latest XF is more conservative on many fronts when you consider its subdued style and middle-of-the-row power output figures even in the top-level XF S trim. I would conclude that moving towards conservativeness isn’t always a bad thing, especially considering my loaded XF S AWD test vehicle’s as-tested price of $67,195. At such a price the Jaguar becomes an attractive proposition when compared to some of its German competition in their loaded forms that may bring the price of admission well past $70K. Jaguar is moving in the right direction, and the latest XF contributes to such a move without any major complaints in my assessment. 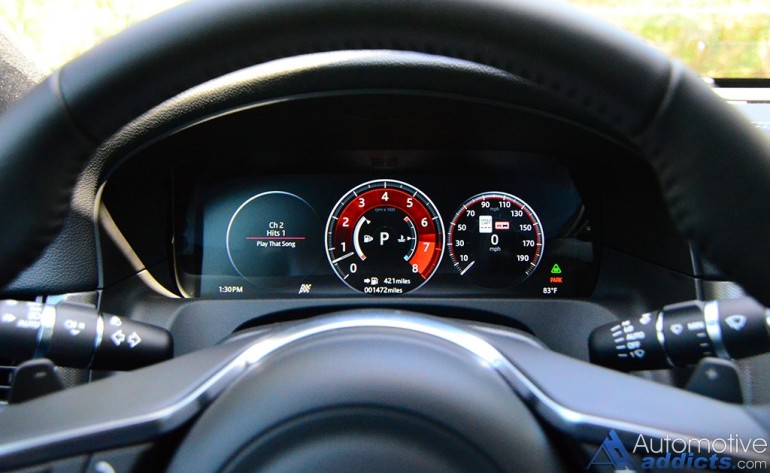