Inside Koenigsegg Explains The Transaxle: Video 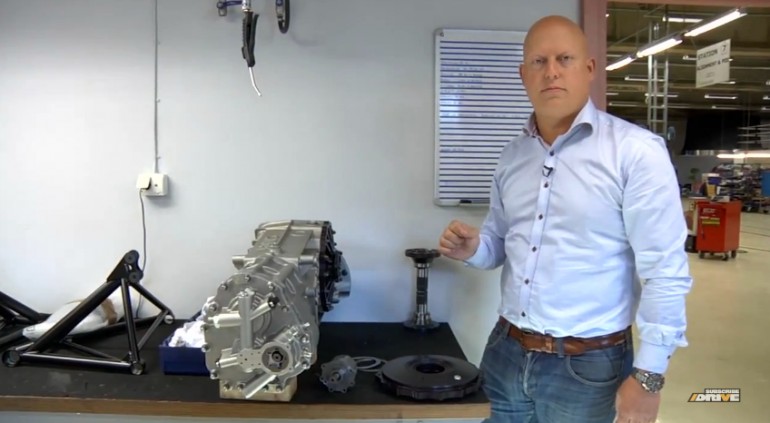 Unless something goes wrong, most people don’t spend any time thinking about their transmission. If you have a passion for driving, especially on a track, you know how key a role the transmission plays in generating low lap times, especially when you’re talking about a transaxle with an embedded differential.

The differential is what allows you to get the power from the transmission (and engine, obviously) to the ground. An open differential, used on most non-performance cars, limits traction as it does nothing to prevent wheel spin when grip is lost (especially if the car lacks modern technology like electronic traction control). A locked differential provides the best grip in a straight line, but makes cornering difficult since the rear wheels can’t rotate at different speeds as they corner.

Koenigsegg’s transaxle uses a hydraulically-locking differential that can respond very quickly to a loss of traction at the rear wheel. The net result is higher cornering limits, as well as the capability of getting on the power earlier in a corner than you’d expect from a mid-engine, rear-drive car.

While the Koenigsegg gearbox uses a conventional dry clutch at the engine, it also incorporates a wet clutch to instantly drop the speed of the input shaft when shifting gears. The net result is zero synchronization time, resulting in faster shifts from the automated manual gearbox.

Though the Koenigsegg Agera R makes some 1,140 horsepower, its transmission is among the lightest in the supercar world, weighing in at just 81 kilograms (178 pounds). Like everything else on the Agera R, you get the feeling that serious thought went into its design, as opposed to merely buying an off-the shelf transmission from a mainstream supplier.

This is the final video in the “Inside Koenigsegg” series, and we’re going to miss Christian Von Koenigsegg’s expert narration of the product that bears his name. We may lack the income to park one in our own garage, but we’ll admit that the series has given us a tremendous respect for the boutique hypercar manufacturer.