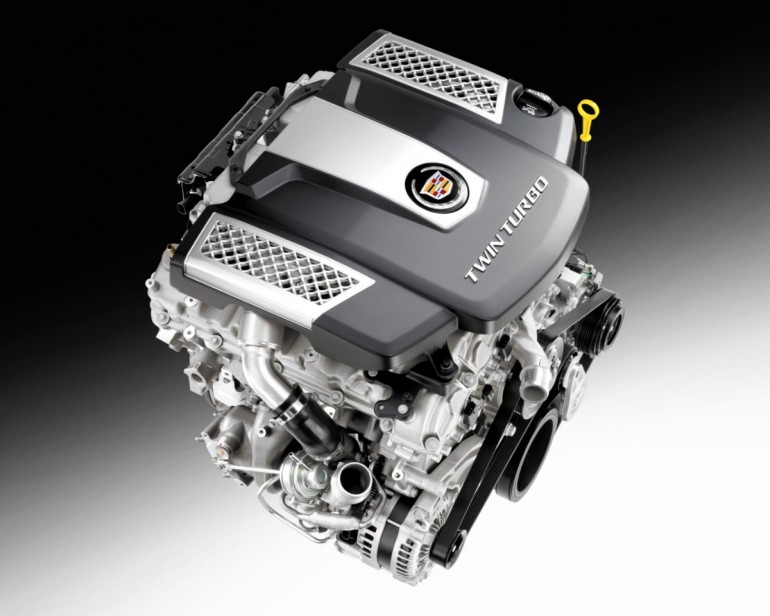 While enthusiasts are quick to point out that “there’s no replacement for displacement,” the average buyer likely can’t tell the difference between a V-8 and a forced-induction six, except when it comes to his weekly spend on gasoline (where the V-6 has a decided advantage).

Even enthusiasts won’t be complaining about GM’s latest twin-turbo V-6 engine, set to launch in the 2014 Cadillac CTS sedan. It may only have a displacement of 3.6-liters, but at 118 horsepower per liter it’s the most powerful V-6 ever produced by General Motors. Peak output is rated at 420 horsepower and 430 pound feet of torque, which is good enough to get the 2014 Cadillac CTS sedan (which also boasts an eight-speed automatic transmission) from 0-60 mph in just 4.6 seconds.

In normally-aspirated form, a variant of this engine is already used in the Cadillac SRX, XTS and ATS. To handle the additional stresses of forced induction, the twin-turbo model gets a new block casting, new head castings, stronger connecting rods, domed pistons with friction-reducing skirts, a forged steel crankshaft and oil spray under the pistons.

To help the engine reach this impressive power density, it gets a 10.2:1 compression ratio, direct fuel injection, dual turbochargers and a charge air cooler (intercooler) system.

For now, GM says the new V-6 will appear in the Cadillac CTS and XTS models, but we hear it may be the engine of choice for the ATS-V as well. We wouldn’t be a bit surprised if it turned up under the hood of the next Camaro either, though muscle car fans amy have a hard time accepting the twin-turbo V-6 as an alternative to the V-8.