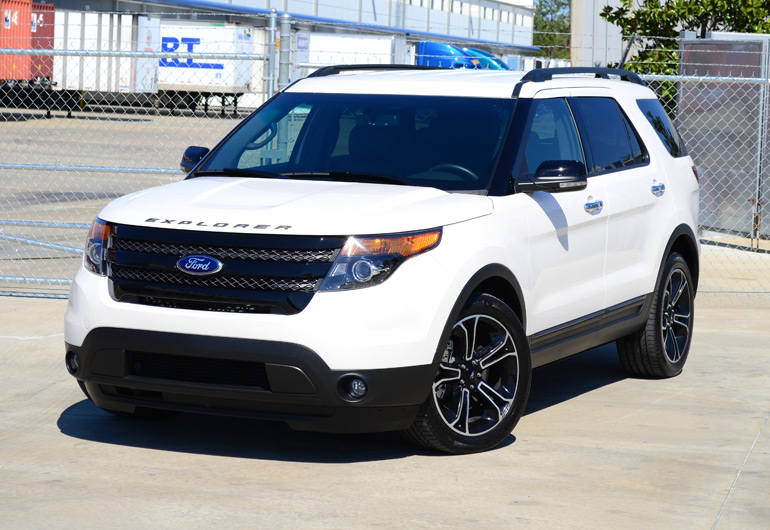 The complete redesign of the 2011 Ford Explorer set in motion a new movement by Ford to re-exemplify where they stand in the ever-so-growing and extremely competitive SUV segment. Having a successful run for new Explorer in the past 2 years, Ford ups the ante with a Sport version of the Explorer featuring re-worked chassis components, unique sport trim details and Ford’s powerful yet efficient 3.5-liter EcoBoost V6 engine.

The new 2013 Ford Explorer is the best it has ever been touting its unibody construction first introduced as a 2011 model. The all-new 2013 Ford Explorer Sport, as the top-level trim much like the Limited version, comes packed full of amenities and features but adds the well-endowed 365 horsepower 3.5-liter V6 EcoBoost engine. 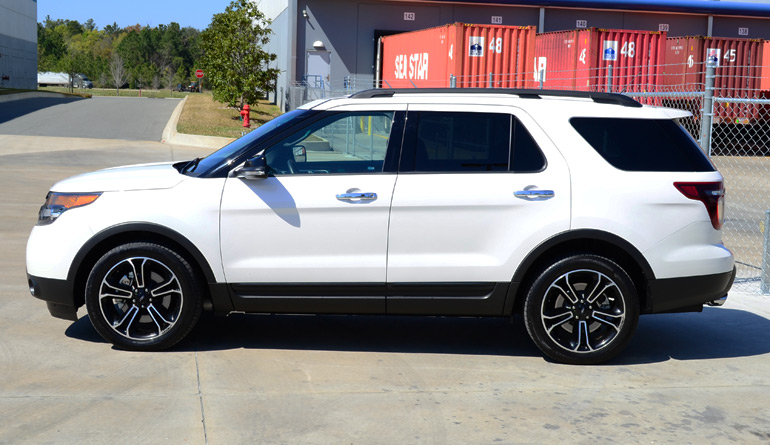 As a fan favorite, Ford’s new 3.5-liter V6 EcoBoost (turbocharged) engine is utilized in many vehicles, and for good reasons. The powerful and efficient boosted engine making its way into the new Ford Explorer only makes sense in the eyes of enthusiasts and those new-age baby boomers who want a bit more oomph in the family hauler. Not only did Ford drop the V6 EcoBoost engine into the new Explorer Sport, but they changed up many chassis components to stiffen the body structure, improve handling and add stability to handle the extra power along with a unique sporty look.

The all-new 2013 Ford Explorer Sport is a complete package where all components mesh together and work in harmony to give consumers that sporty edge desired in many SUVs that are otherwise boring econo-SUV-crossover-wagon-types with a plethora of seats and cargo space. Undeniably, the new Ford Explorer Sport spices things up a bit without losing its SUV-esq versatility and comfort. 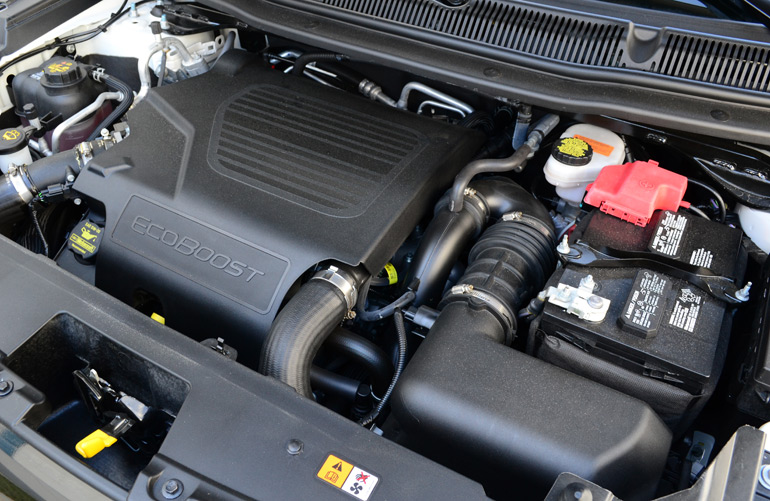 Powering the new 2013 Ford Explorer is the 3.5-liter EcoBoost V6 engine with 365 horsepower and 360 lb-ft of torque directed through its standard four-wheel-drive system. On the open road the new Explorer Sport is a menacing SUV that adapts well to spirited driving provided you do not have much cargo in the back bouncing around. The Explorer Sport gets a unique set of 20-inch wheels, wider than what is available on the standard Explorer trim levels, making way the 265/45 20-inch performance summer tires selection. Having a wider tire patch only added to the Explorer Sport’s handling abilities along with its sport-tuned suspension, which adapts well to back roads without much harshness transmitted into the cabin.

The electric power steering is among the best in its class providing a decently weighted wheel and just the right amount of feedback from the road. Thanks to the new strut tower brace, stiffer springs and dampers, and a solidly mounted steering rack, the new Explorer Sport always feels firmly planted on most surfaces. Managing torque through all 4 wheels was left to the program-selectable terrain management system, which transmitted a small amount of torque steer through 1st gear but by 2nd it seemed to straighten things out. The engine puts down all 360 ft-lbs. of torque as low as 3,500 rpm, putting the Explorer Sport in motion as a capable tow vehicle, up to 5,000 pounds. When not towing, the new 2013 Ford Explorer Sport can dash to 60 mph in about 6.2 seconds, a decent clip for a 7-passenger SUV with a curb weight of 4,859 pounds. At times it felt as if the Explorer Sport can do better than 6 seconds to 60 mph, but its hefty weight puts a damper on things dispute all 4 wheels gripping the pavement without breaking loose. 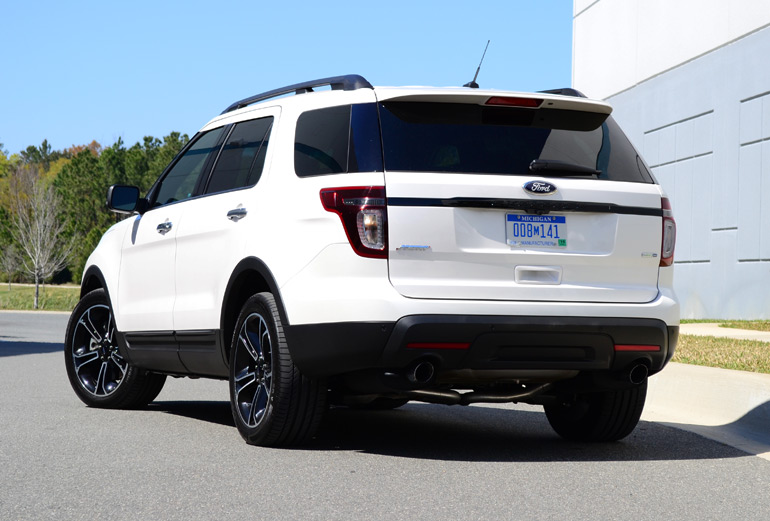 Braking performance is improved with the Explorer Sport, which features larger front brake rotors over other trim levels. Driving the new 2013 Ford Explorer Sport always exuded a reassuring experience even during inclement weather conditions as a remapped AdvanceTrac traction and stability control system directs power to the wheels with more grip. 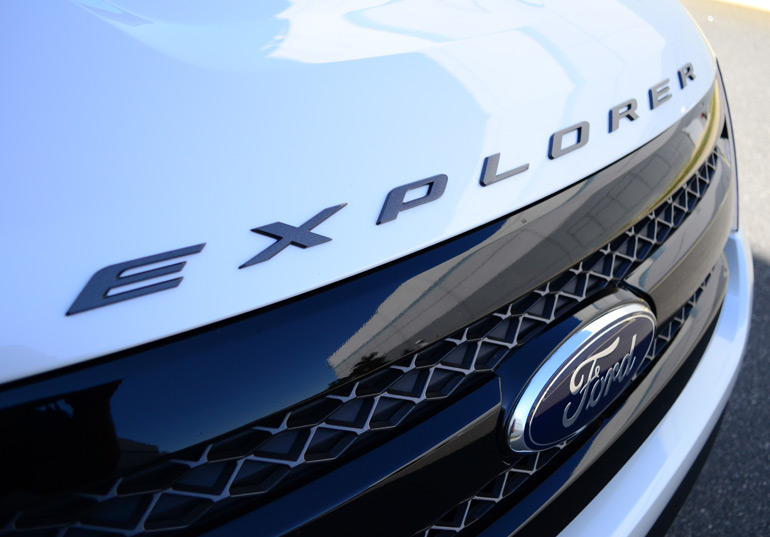 The unique sporty character of the new 2013 Ford Explorer Sport not only filters through its chassis and powertrain, but many unique sport traits are found throughout the interior and exterior. The new Explorer Sport on the outside has unique darkened 20-inch wheels, darkened LED taillights, blacked-out front grill, headlight inner trim, rearview mirrors, and blacked-out lower cladding trim pieces.  With the many color options are still available for the Explorer Sport trim, the complete exterior look matches its menacing power output and sporty road-going demeanor. 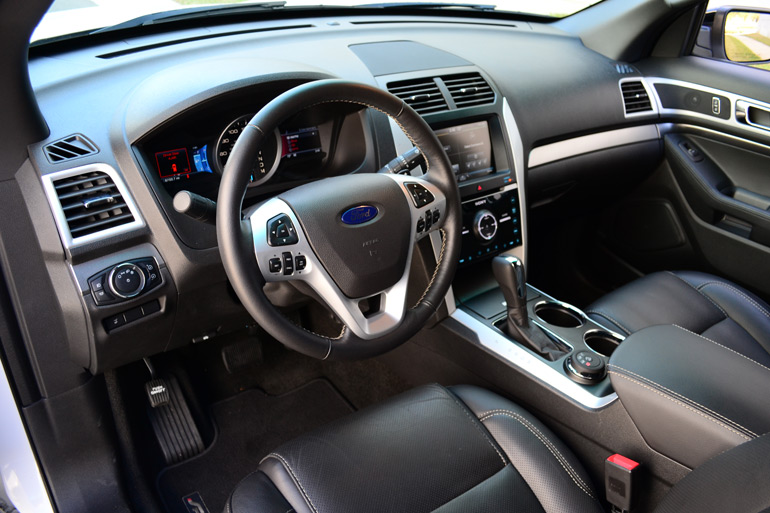 On the inside the new 2013 Ford Explorer Sport only gets a few minor changes to set it apart from standard trim levels. The front seats are replaced with sport seats and unique accent stitching. The middle row chairs seat 3 and the 3rd row has seating for two, just like in the Explorer Limited trim package – providing comfortable seating for all rear occupants. The 3rd row is a bit cramped for 2 adults although manageable for most. Cargo space is on average and can be expanded with the easy folding of the 3rd row seats flush into the floor. Rear cargo access is a sync due to the standard power liftgate in the Explorer Sport.

Up front, the perforated leather heated and ventilated sport seats provide a bit of extra bolstering over standard Explorer seats. The dashboard instrument cluster is the same unit found in other Explorer trims with two color LCD screens on either side for viewing customized vehicle statuses, basic infotainment information and configuration of vehicle settings. 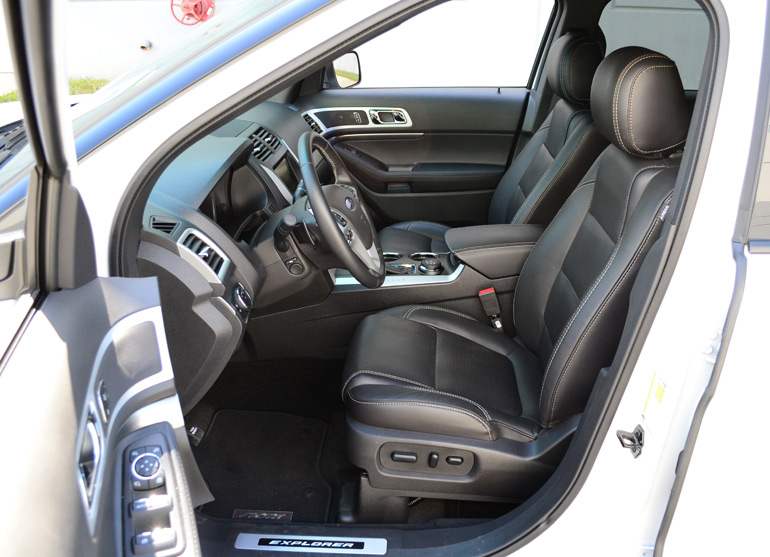 Tied into the MyFord Touch system is the center-mounted high-resolution LCD touchscreen. Other redundant controls for the HVAC and audio system are just below in a set of glossy capacitive touch buttons. Ford has improved upon the minor shortcomings of the MyFord Touch system, as button response times are shorter and more responsive. Though, the MyFord Touch system can be somewhat cumbersome to those not familiar with the operation of capacitive buttons and perfectly targeting their fingers on the touch-screen’s graphical buttons. Basically, I still found myself mistakenly pressing buttons that I did not want. The capacitive part of the system does not take long to get used to and is much of an improvement over previous iterations of MyFord Touch. The take away is the system may not be for everyone, but after spending a good amount of time you tend to get used to its unique operation. 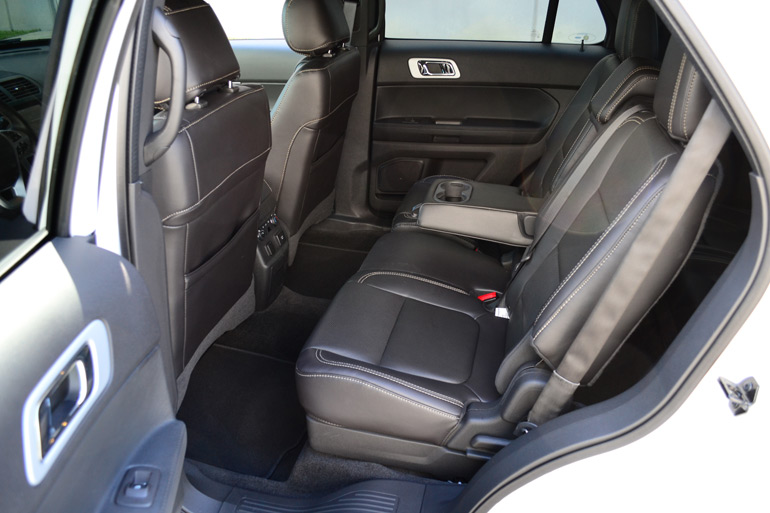 Having a sport version of the new 2013 Ford Explorer is a step in the right direction to fulfill the need for SUV buyers looking for V8 power without the extra cost of fuel and vehicle price. My 2013 Ford Explorer Sport test vehicle saw an average of 21 mpg doing short inner city drives and a few long highway stints. The new 2013 Explorer Sport gets a respectable EPA estimated 16 mpg city and 22 mpg highway. On the highway I was able to get an even better figure of 23 mpg on a steady cruise at 60 to 65 mph. Having the extra power at your disposal, excellent handling abilities for a 7-passenger SUV, and good sporty looks is surely an added benefit to the Explorer Sport over other trim levels. 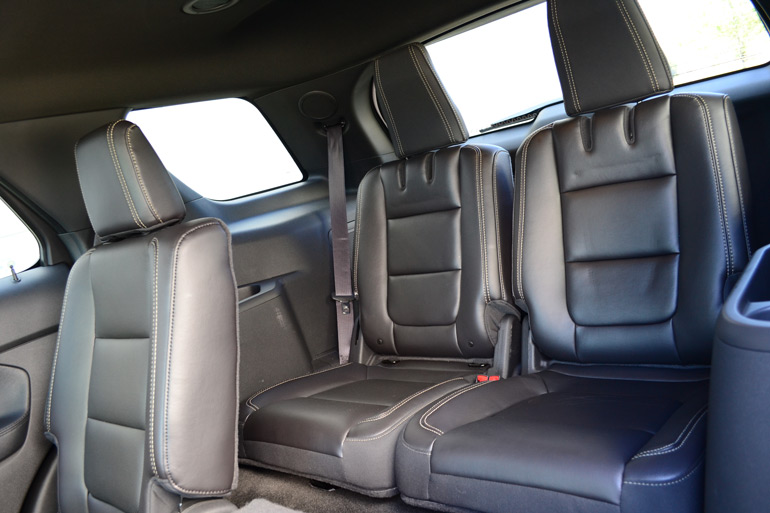 The all-new 2013 Ford Explorer Sport in a decently configured package will run you around $44,000. For that price you get many standard features, which are mostly part of the Explorer Limited trim’s package. Tacking on a few more options, such as adaptive cruise control package and a dual-panel moonroof will put you close to $47,000 for a fully-loaded Explorer Sport.