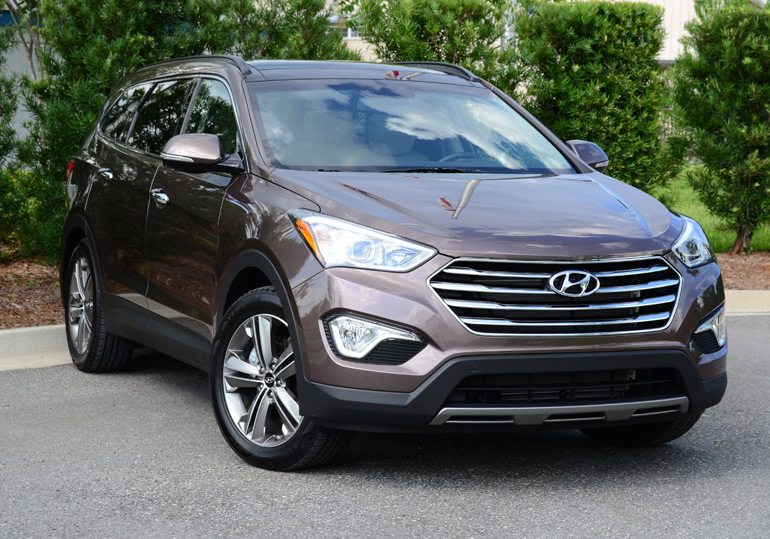 The all-new 2013 Hyundai Santa Fe has already set in motion a new movement by Hyundai to attract buyers seeking an affordable crossover utility vehicle with room for 5 and several highly sought after amenities wrapped in a good looking versatile package. With the introduction of the new Santa Fe GLS and Limited trims with third row seating, the crossover segment has a much larger reach for Hyundai proving to set the bar just a bit higher when you factor in the over-all value.

The newest Hyundai Santa Fe gets a complete redesign for the 2013 model year introduced last year (2012). Since the conception of the new Santa Fe Sport model Hyundai promised a new trim level to offer third row seating, which is an adored feature for many who are shopping crossovers and have the need to transport 6 or 7 passengers. The two trim levels offered for a 3-row Santa Fe is the GLS and Limited. My 2013 Santa Fe Limited featured a 6 passenger seating setup where the 2nd row has captain chairs and the rear a two-seater 50/50 split-folding bench. Both 3-row capacity Hyundai Santa Fe trims are equipped with a new 3.3-liter DOHC V6 engine producing 290 horsepower at 6,400 rpm and 252 ft-lbs. of torque at 5,200 rpm. 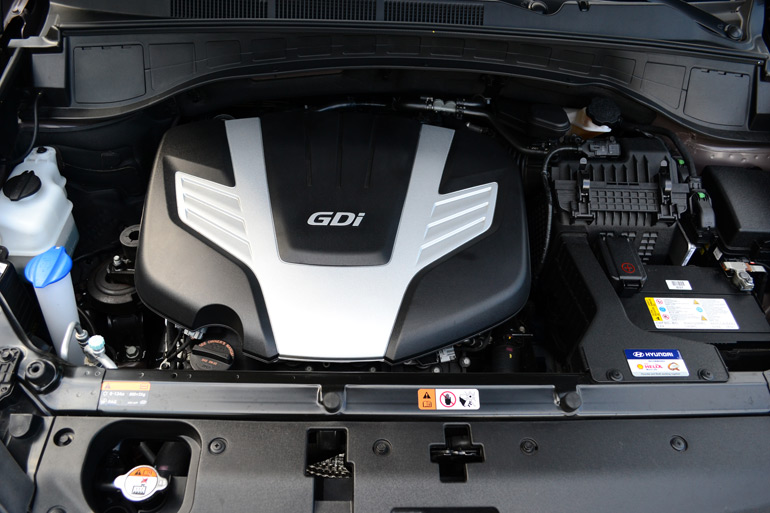 The new powertrain on the Santa Fe Limited mates the V6 engine to a 6-speed automatic transmission with either front wheel drive or an advanced all-wheel-drive system. All trim levels for the new Santa Fe can be equipped with an optional all-wheel-drive system. My front-wheel-drive Santa Fe Limited test vehicle has a respectable amount of power for what is considered to be an extended wheelbase over the base Sport and Sport 2.0 Turbo trim level’s standard 5-passenger setup. Power delivery, though, is somewhat unpredictable due to a lofty rpm where the torque peaks. 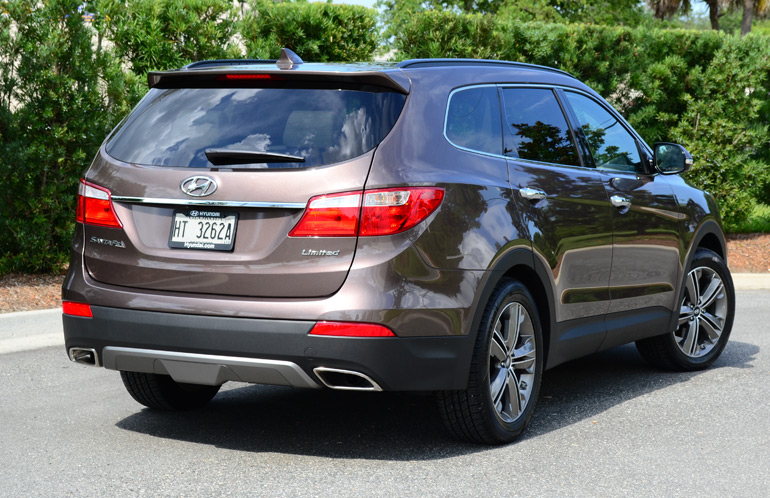 The 3.3-liter V6 in the Hyundai Santa Fe Limited coupled with the transmission’s initial eco-mapping is like a virtual on-off switch at times. Basically, pressing the throttle through mid-range does not give you enough over-taking power on the highway. Subsequently, you are required to press the pedal nearly to the floor for a substantial downshift to take place and for the engine to really turn over to generate passing power. Unfortunately, this shortcoming tends to develop a bit too much of an abrupt power surge to the front wheels to either break them loose activating traction control or at least accentuate your senses to counteract a rash of mild torque steer. You can say the V6 engine and 6-speed transmission may need new ECU programming to give the Santa Fe Limited a better communicating mid-range power output, especially considering the V6 engine is capable of a decent 290 horsepower and 252 ft-lbs. of torque. 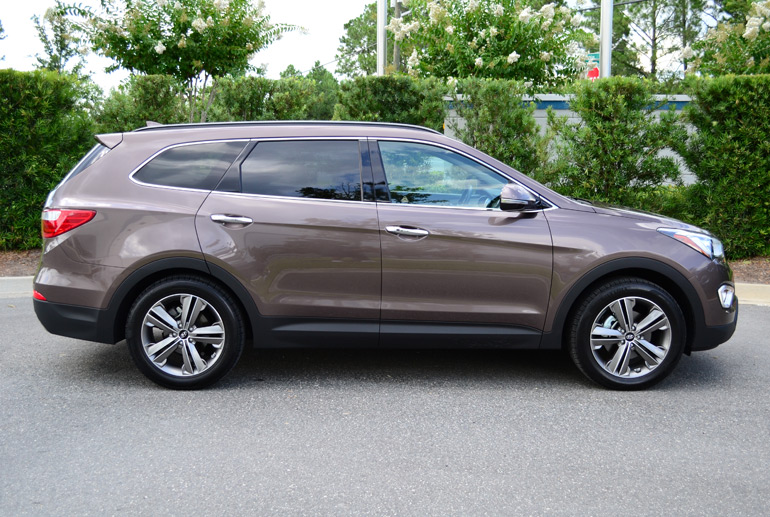 Looking past the unpredictable power delivery, the new 2013 Hyundai Santa Fe Limited has an excellent ride aided by its long 110.2 inch wheelbase and large 19-inch wheels and tires found on my test vehicle. Handling is for the most part assuring and rarely sloppy in confides of a “conservative” driver. In other words, the Santa Fe Limited feels firmly planted and somewhat light on its feet as it should being that it tips the scale at a surprisingly low 3,915 pounds for a 3-row crossover vehicle. The steering feel is somewhat numb especially when the new Driver Selectable Steering Mode is set in Comfort. The new Driver Selectable Steering Mode allows three different settings to adjust the steering effort offering comfort, normal and sport modes. Sport mode does add effort to the steering, however, it does not added any substantial feedback from the road. Most enthusiasts would notice this trait right off of the bat but considering the target demographic for the Santa Fe Limited, the Driver Selectable Steering Mode may prove to be an essential feature for those who want a bit more confident feeling in their steering effort, especially when traveling at highway speeds. Fuel economy estimates come in at 18 mpg city and 25 mpg highway for the Santa Fe Limited FWD. I saw an average of about 21 mpg during my drive consisting of a mix between local town roads and interstate travel. On the highway I was only able to get my best estimate of 23.5 mpg and around the city I saw slightly better than the EPA city estimate landing around 18.8 mpg. 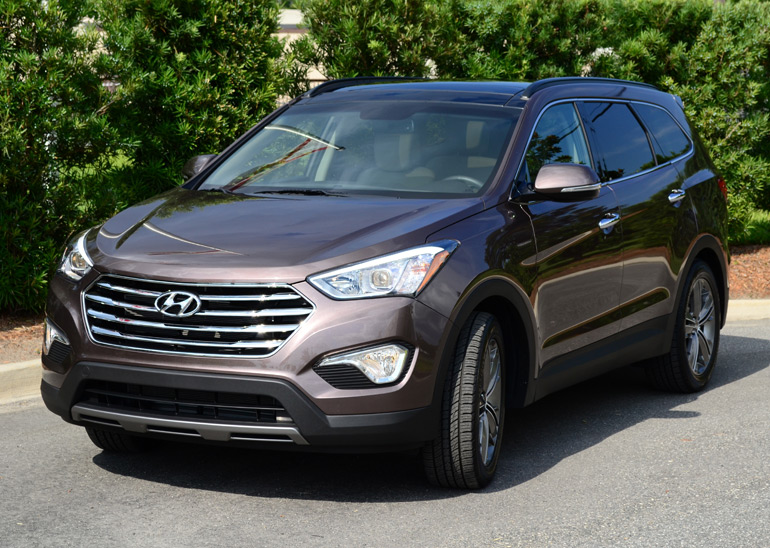 On the outside the new Hyundai Santa Fe Limited has a new look slightly different from its smaller Sport-trimmed siblings. The front grill on the Limited trim is larger and has a much more substantial look overall. The rear taillights are re-sculpted and the dual exhausts are separated with integrated chrome tips in the lower bumper. One could easily mistake the two vehicles from a reasonable distance but up close the differences really stand to define the larger Santa Fe Limited’s presences and larger size. 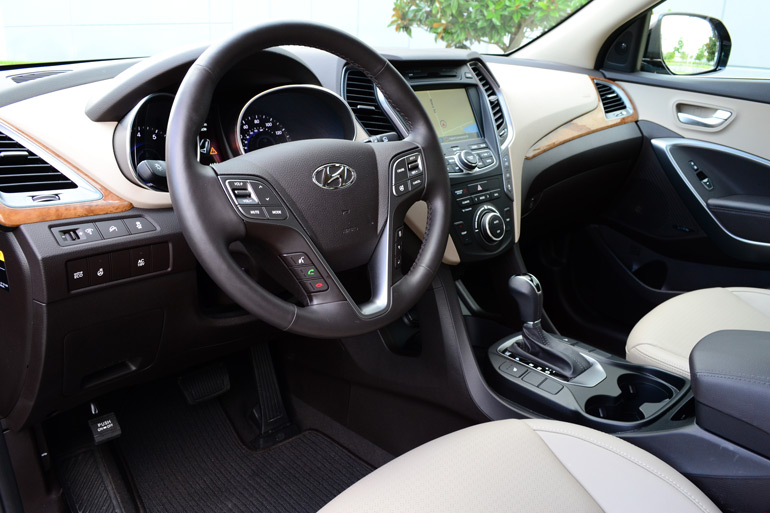 The interior of the new Santa Fe Limited takes much of its cues from the Sport trimmed models with the exception of the added room and 3rd row of seats. In the GLS trim you will get the full 7-passenger configuration. The dashboard and front seating area of the Sport, GLS and Limited trims remain to be virtually identical. The wood trim on my Limited test vehicle seemed somewhat out of place as much of the interior was laced with dark soft-touch plastics and accented by larger beige surfaces. 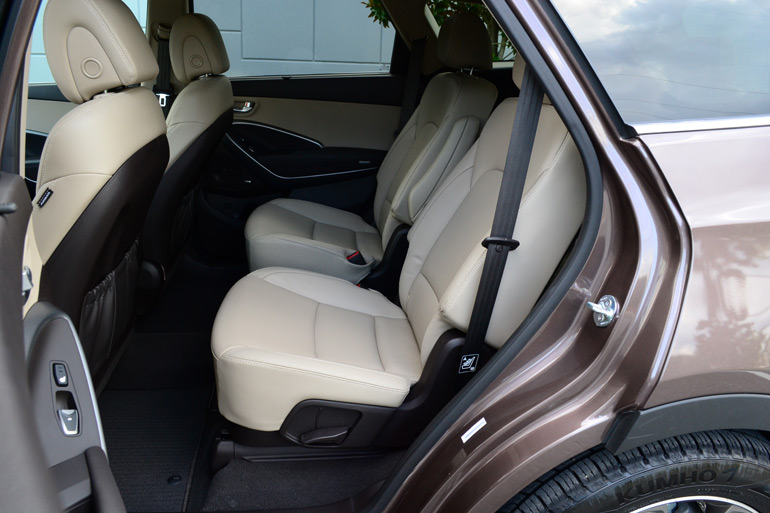 The center-stack infotainment controls take some getting used to especially considering how the volume is the smaller of the two turn knobs, the other being for the a/c fan speed. Using the latest interface for Hyundai vehicles equipped with GPS navigation fed through a high-resolution LCD touch screen, standard equipment on the Santa Fe Limited, proves to be a user friendly environment for entering destinations with minimal steps while navigating other vehicle controls. Additionally, other menu sets do not require an extensive learning curve for most. Hyundai’s new Bluelink telematics proves to serve as a nice liaison for those needing assistance on the road whether it be to dial-in to check the details of a check-engine light, get directions fed to the built-in GPS navigation system, or request emergency help. The system also serves as an automatic dial-up response to a call-center in the event of a serious accident. 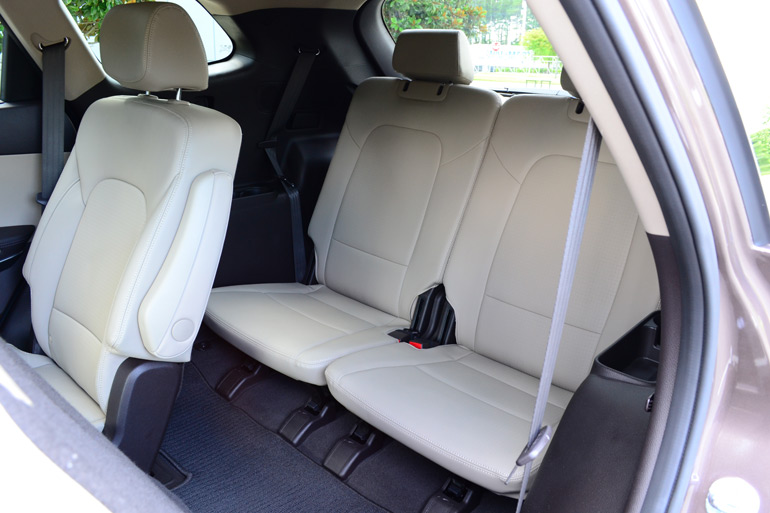 For obvious reasons, you will never go thrashing around on an autocross in the new Hyundai Santa Fe in any given trim level, even if the 3.3-liter V6 seems eager to get the job done at wide open throttle. Of course you would get an abundance of oversteer when really pushing the big Santa Fe Limited around sharp turns. Although, the Santa Fe Limited’s handling abilities are no worse than its 3-row crossover competition. When it comes to the larger Santa Fe Limited, enthusiasts can still have the left-over crumbs of the performance pie but with a bit of extra whipped topping due to the cargo and passenger space of a tightly knitted crossover.

Adding to all of our impressions of the 2013 Hyundai Santa Fe Sport 2.0T we drove last year, we can say that the new Santa Fe Limited improved upon the over-all family-hauler equation without compromise by adding ‘one additional seat’. Having saying it that way really makes you wonder if a minimum of a $6000 premium is worth it to tote around an extra live body in comfort totaling out for a base price of $33,100. Then again, the Santa Fe GLS may be one not to pass up as it serves up a smaller starting price ($28,350) and a space for 7 passengers. 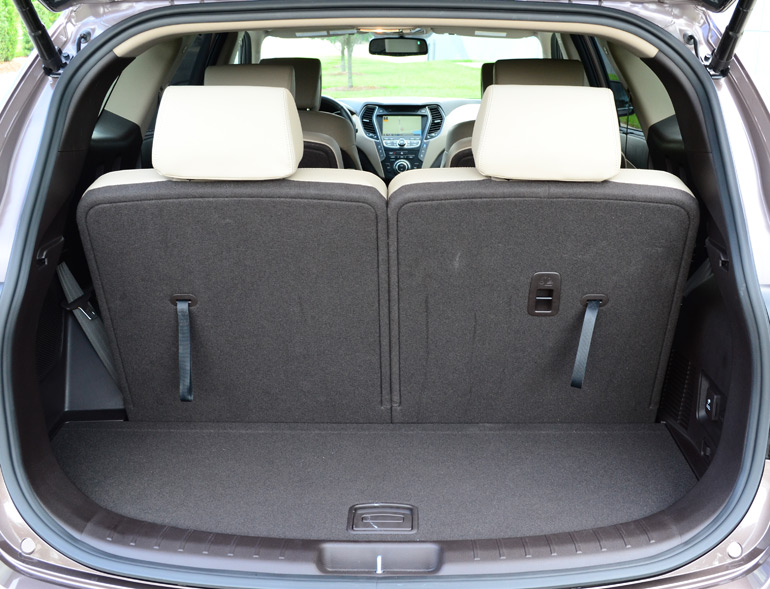 The all-new 2013 Hyundai Santa Fe Limited 6-passenger crossover starts at just $33,100, which is an attractive buy when pitted against direct competition. Nevertheless, considering the abundance of standard features and recent proven track record of Hyundai, this is one crossover with a 3rd row (one extra seat woohoo) that should not be passed up for a test drive.