Confessions of a Former Mini-Van Hater: The Toyota Sienna XLE

I have always considered myself a car guy. I truly enjoy the smell of gasoline rich exhaust and I am solidly convinced that “new car paint” would make a fantastic air freshener scent. I have a long history with tiny two seat sports cars. When my first daughter was born, I bought what I considered a “family car,” a lowered and heavily modified 1988 300zx with the 2+2 option (that’s car talk for the postage stamp size back seat that helps you get cheaper car insurance and provides a longer wheel base for racing). Shoe horning the car seat back there was a chore, but actually placing the baby in the seat was a combination of two of my favorite childhood games, Twister and Operation. At 40, I guess I have matured a bit. With two kids, one a teenager, the family car is a Sublime 2007 Dodge Charger Daytona with some engine mods, a cold air induction system and modified exhaust. Sure the car stands out in a crowd, but at least it has a massive back seat. The truth is, I have never been a grown up car/van/truck kind of guy. Furthermore, I have a bit of a reputation for teasing my friends who are. Which means when I contacted my friend at Toyota and requested a mini-van to review, he almost did not believe me. 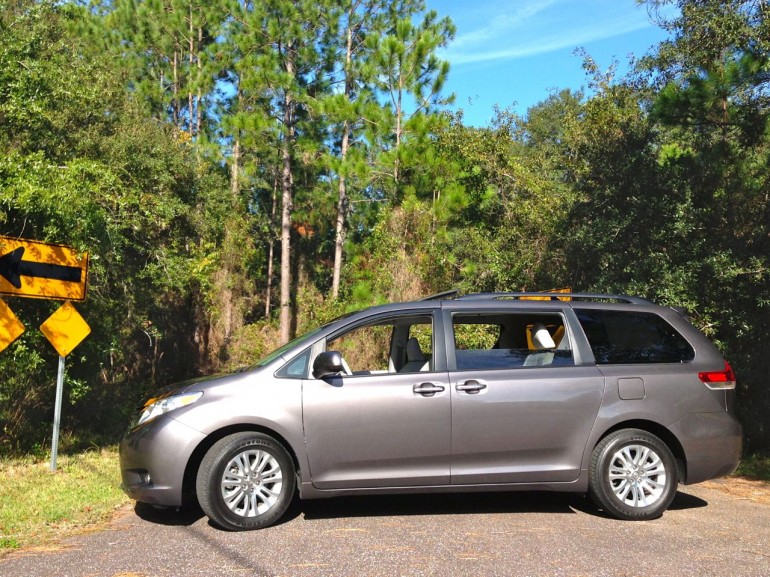 My plan was simple, I had a bunch of family coming in for the holiday and I wanted a vehicle that would comfortably fit everyone for some local sight seeing trips. As much as I love the Charger, without using the trunk there is simply no way of fitting more than five people in there. Well you can fit them I guess, but it is illegal and everyone gets cranky. 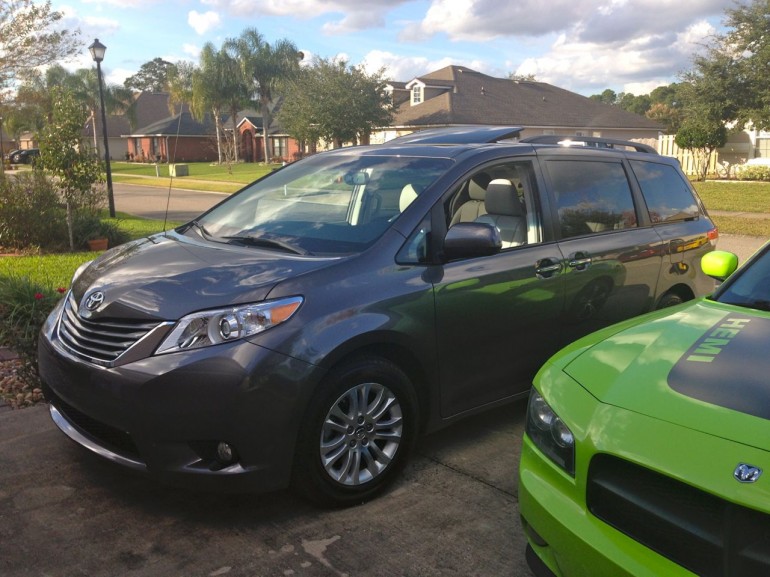 My contact at Toyota, once he made me pinky swear that I really wanted a mini-van, set me up with a nicely equipped eight passenger 2014 Toyota Sienna XLE with a 6-speed automatic. Toyota delivered the van on a Friday afternoon, dropping off the “predawn gray mica” people mover just in time for me to use it to pick up the kids from school. For a moment, when I first sat in the drivers seat, I felt as if I had become the middle age stereotype that I had fought so hard to avoid. What had I done? Maybe I did not think this through. Then it happened…I started the van, drove down the road, and began to realize why people invest hard earned money in these things. 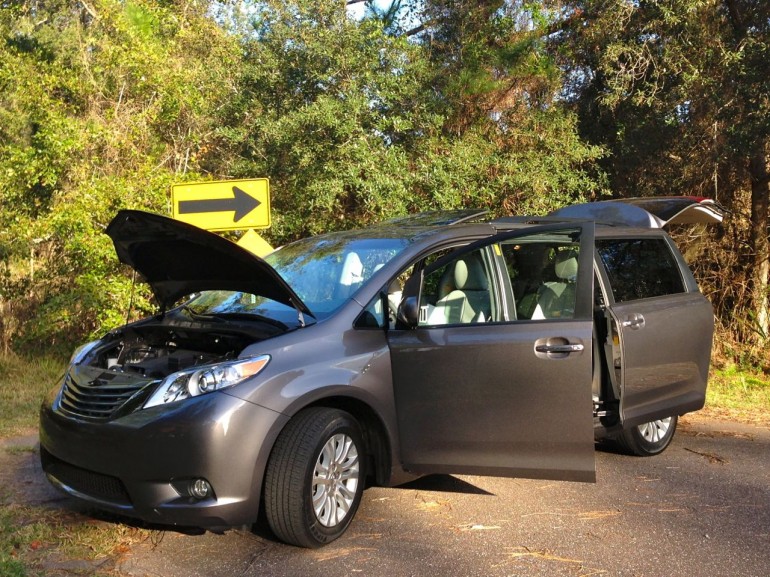 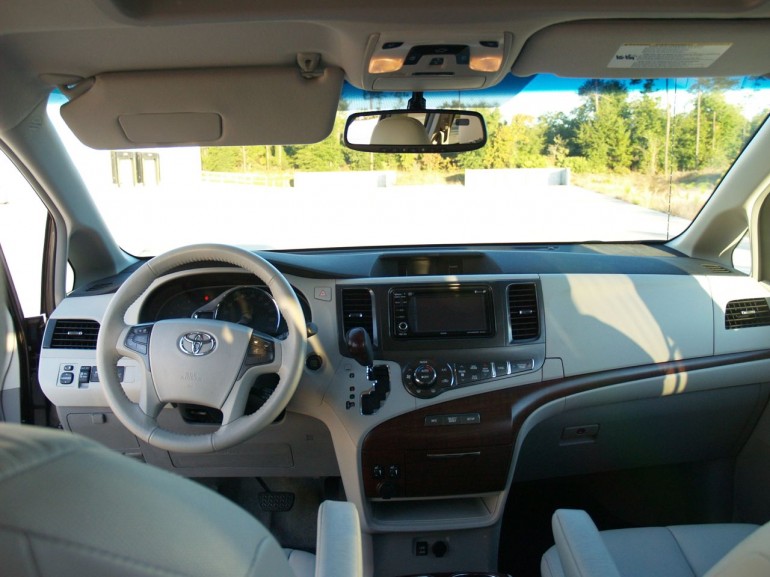 The massive leather captain’s chair had me sitting high above traffic and it was rather comfortable. The V6 engine that Toyota is using in the Sienna is quite powerful (266 horsepower) and rather torguey (245 ft-lbs). The transmission was quick to shift and smooth. In full disclosure, I found myself punching the throttle a few times on the way to the elementary school and giggling a bit. It is one thing to chirp the tires in a Hemi powered pony car, but when you are driving an eight-passenger mini-van, you cannot help but smile. The handling, while not a race-car, was responsive and more car-like than I expected. 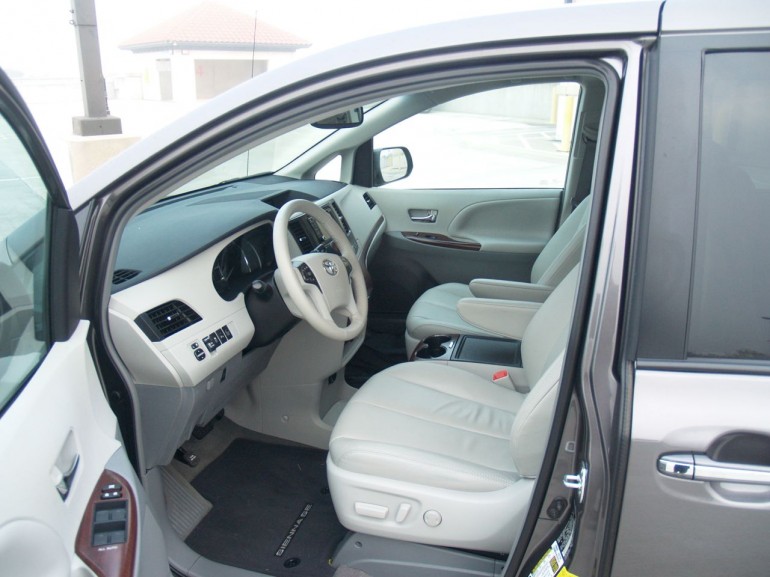 When I pulled into the car pool lane, it took my daughter a while to soak in the shock of seeing her dad in a brownish-gray mini-van. I almost had to show my valid drivers license before she felt comfortable getting in the car. However, once she did it was a little magical. Truth is, I do not think she had ever sat that high up in a vehicle in her life! Suddenly my ten year old was on top of the world, enjoying the comfort of her very own overstuffed leather captain’s chair. The car that we were reviewing for some odd reason did not come equipped with a video entertainment system, but she seemed more than content to stare out the windows and down at the world she had been missing all this time. 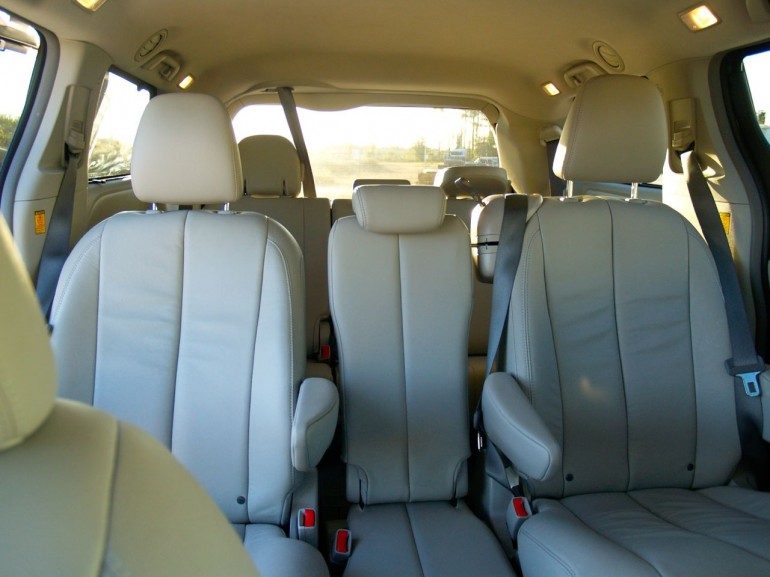 As the week progressed, the 2014 Toyota Sienna XLE proved a truly pleasant family friendly driving experience. The road trip that I planned to see the holiday lights turned into two trips, including one with my “Automotive Addicts family.” On both sightseeing trips, everyone truly enjoyed the comfort and convenience of the seating, the dual powered side doors, the individual climate controls, large windows, and ample cargo space. We took the Toyota to church on Sunday; all eight of us, and everyone enjoyed the ride. Gas mileage was about the same as the hemi powered Charger that I normally drive, but for a large family I can see the value. You simply can do more per mile when you have seating for 8 or seating for two and an additional 150 cubic feet of total cargo space. 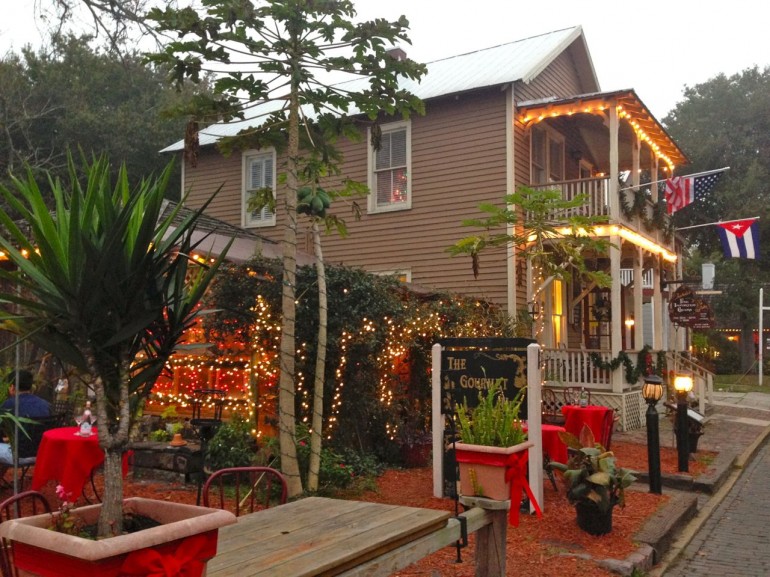 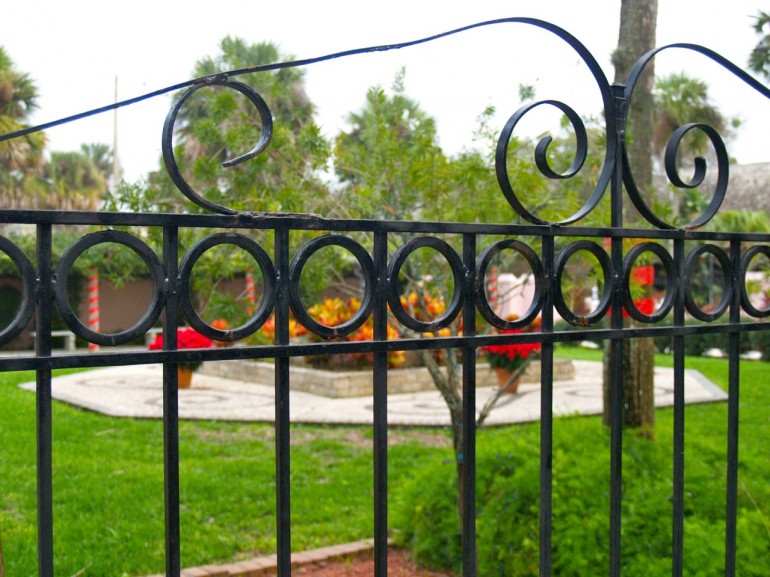 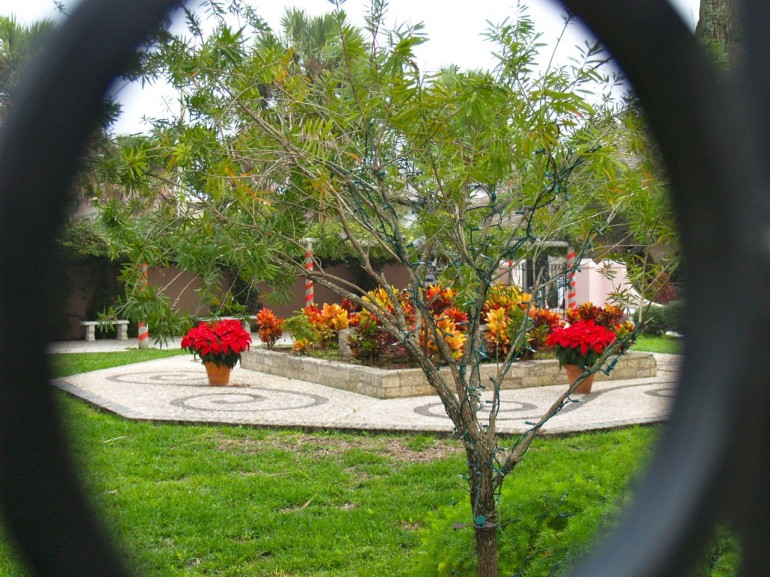 In the end, I was a little sad to see the 2014 Toyota Sienna XLE go. I will always be a performance car guy, but I have to admit, the Toyota surprisingly won me over. I get it. Matter of fact, with a contrite heart, I put together a little confessional video. Whether or not I ever purchase a mini-van for myself is a story I still have to write, but if I do, I would feel  comfortable purchasing a new Toyota Sienna. More importantly, my kids and extended family would be happy with the decision. Enjoy the video!