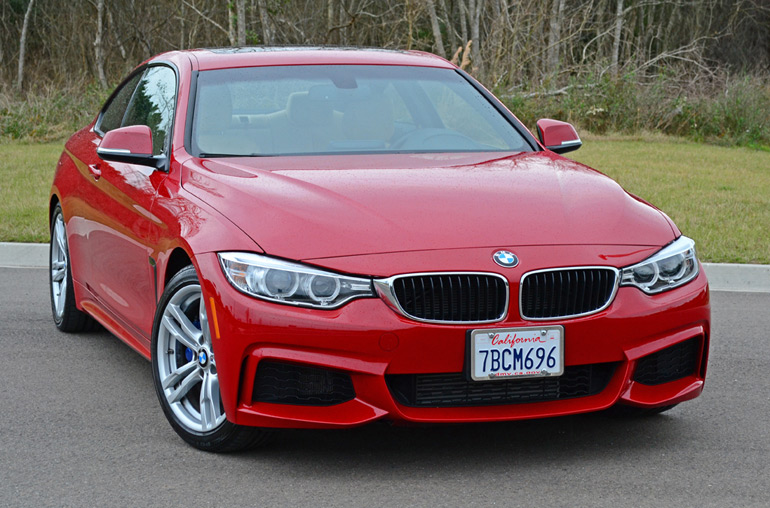 The all-new 2014 BMW 4 Series has been introduced into the Bavarian line of vehicles to replace the outgoing 3 Series coupe while the sedan variation retains the 3 series nomenclature. In this exclusive replacement, the new 4 Series takes on a growing approach for being the highly sought-after ultimate 2-door driving machine, and they have pulled of this accomplishment with great success. 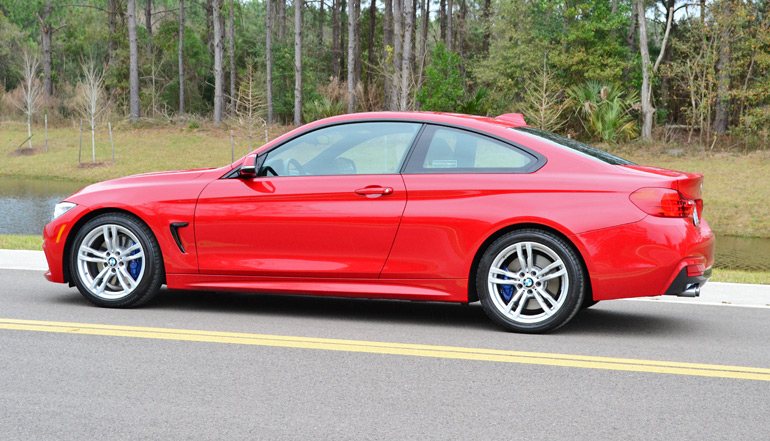 I set off on a week-long journey to wrap my day-to-day lifestyle around the all-new 2014 BMW 428i with the M Sport package, and in doing so it was a well-perceived adventure. In this escapade, I found plenty of space for my family of 3, by means of a simplistic interior layout, and best of all, a refreshed driving nature dedicated to being the best driving vehicle in this class. 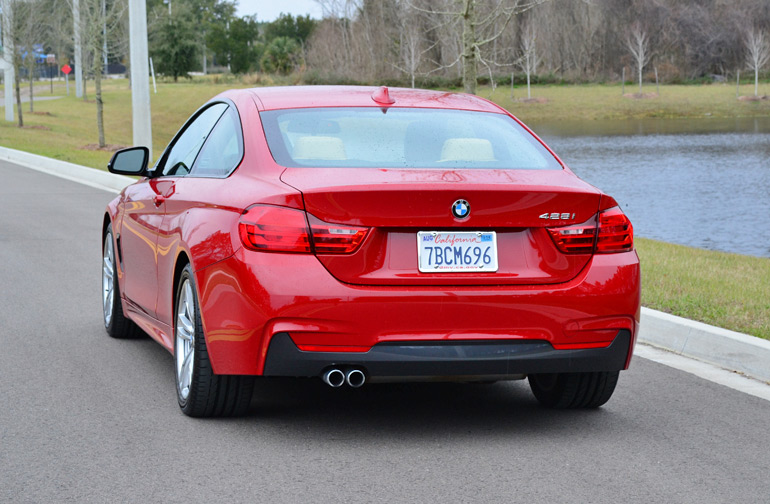 It isn’t very easy for me to give the best driving crown to any vehicle, even though I have been biased towards BMWs ever since I picked up my first BMW in the form of a 2002 M3 about 12 years ago. Evading my biased nature, my new BMW 428i M Sport test vehicle was given a fair chance through my open mind to balance my over-all perception. I can walk away in knowing BMW has not lost its touch in building a vehicle that puts the way it drives ahead of everything else without compromise in other areas. 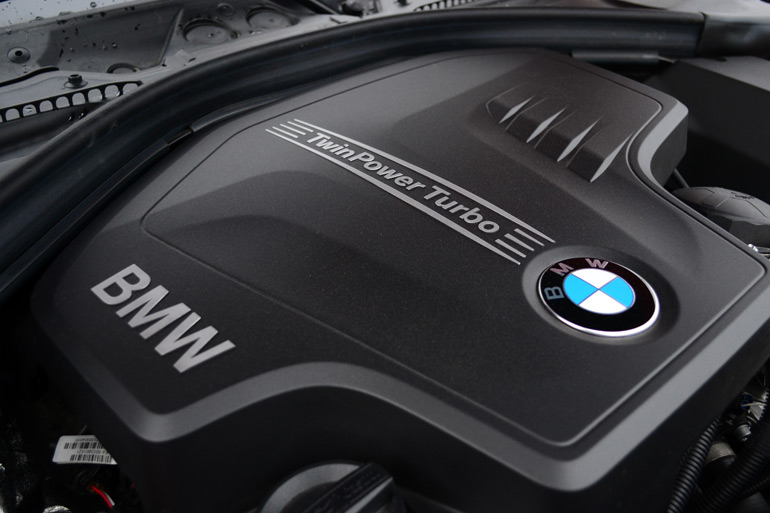 The new 2014 BMW 428i gets a decent powerplant for the start of the 4 Series line featuring a 2.0-liter direct injection turbocharged inline-4-cylinder producing 241 horsepower at 5,500 rpm and 258 lb-ft. of torque as low as 1,250 rpm. The power delivery, at the cost of a callous audible note, is linear through the band with a nice pull but somewhat diminishing at about 6,600 rpm till redline and fuel cut at 7,000 rpm. Power is directed to the rear wheels through a new ZF-sourced 8-speed automatic transmission that exhibits lightning-fast shifting and very minimal use of the torque converter to mimic the snappy shifts and direct connection of a dual-clutch transmission. The new 8-speed automatic is the fastest and most responsive of any automatic transmission with 8 forward gears I have experienced. Even the ECU mapping of the transmission controller is a gem in that it never wastes time hunting for the proper gear or limits your steering-wheel-mounted shifter paddle inputs when reaching the limitations of the RPM band. Basically, it lets you bury the RPM needle right next to redline in its perfectly executed rev-matched downshifts. Additionally, in full Sport+ mode the transmission will let the rpms fly up to fuel cut giving the driver unadulterated control. The direct connection of the 8-speed automatic aides in the direct-injection twin-scroll turbocharged 2.0-liter 4-cylinder engine to get 35 mpg on the highway and 23 mpg in the city. These figures were easily attainable and on the highway I was able to better the EPA figure to get a nice 36.4 mpg at highway speed limits. 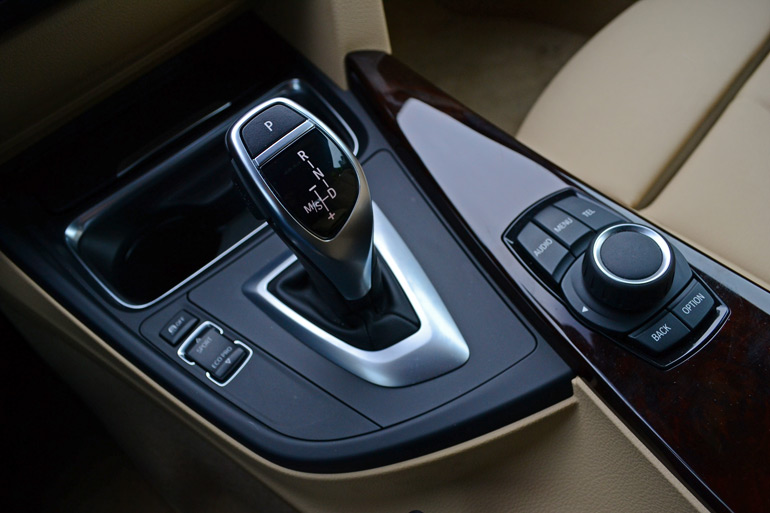 The new 2014 BMW 428i happily fulfills the placement of the go-to and benchmark luxury sports coupe, which has worn a variation of the 3 Series badge for about 4 decades now. Enthusiasts will delightfully praise how the 428i, and more-powerful 435i (300 horsepower 3.0-liter inline-6-cylinder), has carried the 3 Series coupe’s enthusiastic tradition with a steady forward momentum where it left off. This forward momentum is evident in the 428i M Sport package setting itself apart from the normal 428i with more aggressive aerodynamics (different front/rear bumper and diffuser), larger 18-inch staggered aluminum wheels wrapped in 225/45/R18’s up front and wider 255/40/R18 tires in back. The M Sport package also adds on adaptive M suspension (adaptive and adjustable dampers according to selectable ecopro-normal-sport-sport+ drive mode), sports seats, dark Burl walnut wood trim, M steering wheel, shadowline exterior trim (darkened trim), anthracite headliner, and a separate M Sport brakes add-on option featuring larger rotors all around, blue-painted 4-piston calipers up front and 2-piston rear. The Dynamic Handling Package added to my 428i M Sport test vehicle adds variable sport steering, basically dialing in the steering ratio for a perfect quick-steering balance and a nice weighted feel from the new electric-power-assisted steering rack. The adaptive dampers were very subtle in their variation from the selectable driver modes (eco pro, normal, sport, sport+) where the most noticeable change in the modes where found in the transmission’s shifting patterns, throttle position and steering wheel weightiness. In either mode the adaptive dampers provided a competent ride quality where Sport+ mode was better at keeping the 3,470 pounds in check around hard corners. Speaking of weight, the difference in the 6-speed manual transmission equipped 428i vs. my 8-speed automatic is only 50 pounds with the advantage being the lighter manual transmission. 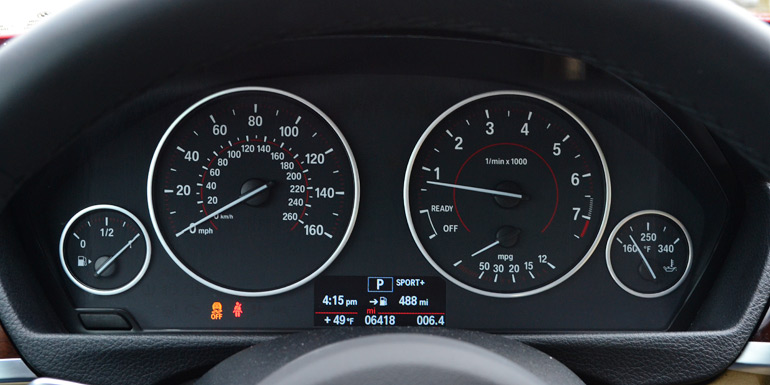 Even though the new 2014 BMW 428i M Sport Package is focused more on being an enthusiast-oriented driving machine, the handling limits can be found in subtle hints when the rear end is broken loose due to the lack of a limited slip differential. The new 428i gets an open differential, which takes an extra bit of effort to allow the rear to communicate to the driver at times when dynamic stability control is disabled. Of course, the DSC handling dynamic mode allows you to slip the rear out for a second or two before the system clamps the rear brake calipers down on the large rotors and saps your throttle input for a quick moment acting as your proactive safety blanket. Nevertheless, the lack of a limited slip diff does not take away from the 428i’s astonishing handling capabilities. Apart from this slight shortcoming, the new BMW 428i is a well-planted vehicle able to tackle just about every road-going obstacle you can throw at it with confidence to spare. This is evident in the almost perfect 50/50 front-rear weight balance, an enthusiast-sought-after characteristic that BMW has prided themselves for pioneering on road cars for many decades now. 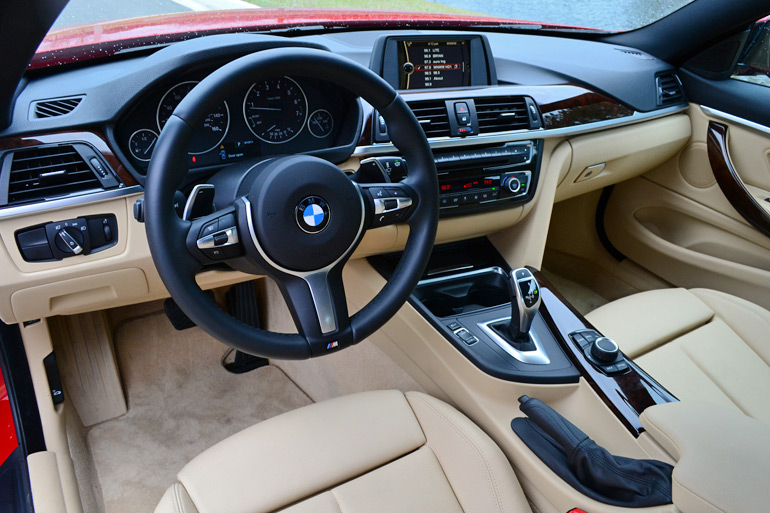 The interior of the all-new BMW 428i carries that unique BMW livery starting from the traditional-styled gauge cluster, which does not require illumination during the daytime by use of sharply printed large dials. The seating area is larger in every direction when compared to the outgoing 3 series coupe where the front sports seats give the front occupants a wide range of adjustability and over 42-inches of legroom. The new BMW 428i’s versatility within its luxury sports coupe form factor is among the best in the business. The rear seating, although slightly short on space, still proves to fit two normal-sized adults where they can access the seating surprisingly easy through the power-slide-retracting front seats. 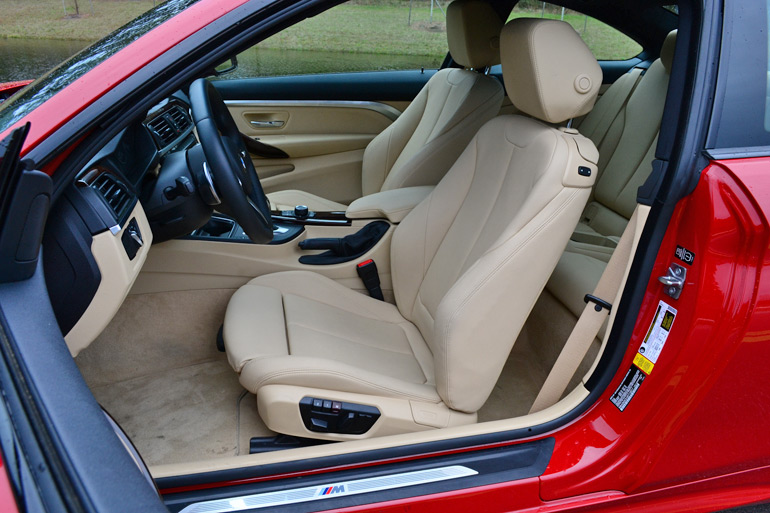 Dashboard controls, receiving a fine tuning on their placement, are easily accessed while the minimized and scaled-down iDrive control on my test vehicle, lacking the optional navigation system, backup camera, streaming Bluetooth audio and a few other highly-sought-after feature sets, still utilize the same centralized controller and high-resolution center-mounted LCD screen accustomed to BMW. Use of the system still takes a while to familiarize yourself, yet it becomes quite the intuitive system after 10 or more minutes of trial and error. Many options and amenities missing on my test vehicle, as previously mentioned, were somewhat of an afterthought for me as the BMW 428i proves to be such an enjoyable driving machine. In knowing how the new 428i can stack up several options and feature packages to your liking, mostly in an A-La-Carte fashion, makes the new 4 series an attractive buy for those who want the full spectrum of luxury from a benchmarked luxury sports coupe. 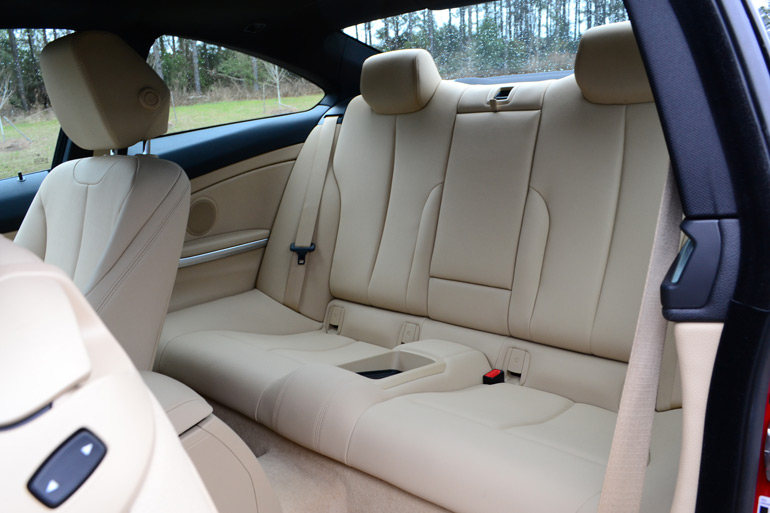 As far as monetary value, the all-new 2014 BMW 428i isn’t shy about defining its audience as the MSRP starts at $40,500, while my test vehicle equipped with the M Sport package, Dynamic Handling Package, M Sport Brakes, a $500 charge for the Melbourne Red Metallic paint job and a $925 destination charge, it comes to an as tested price of $47,125. Though, this pricing scale may not balance well with those looking for their entry into the luxury brand, the 4 series has undoubtedly grown into a much more sophisticated luxury sports coupe deserving of its admission fee due to its adventitious and enthusiastic ride qualities, unique styling, worry-free maintenance plan (4-year/50,000 miles no-charge factory-recommended maintenance), and admirable personalization options.