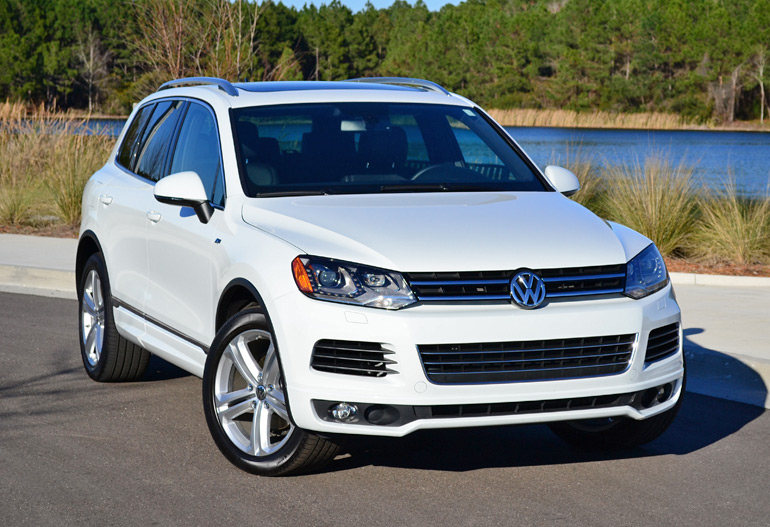 In Volkswagen’s aim to be at the forefront of the automotive sales force around the world, the latest vehicles from the German automaker have taken on a new approach in agreeing with what consumers desire in their day-to-day transportation. Probably one of the overlooked changes within the Volkswagen line remains to be the Touareg, which entered into its 2nd generation for the 2011 model year and carries that basic design for the latest 2014 model. The new 2014 Volkswagen Touareg has embarked on a journey thought to have been overshadowed by predominant competitors in the crossover utility vehicle segment but still holds its own and some by offering many different trim levels and three engine choices with more of a focused task for on-road duties. 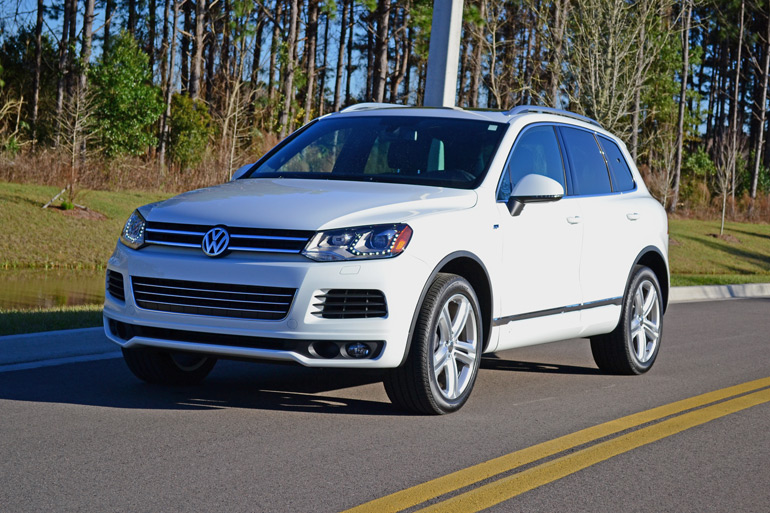 The new 2014 Volkswagen Touareg receives a new R-Line trim, which is the choice for my test vehicle. Capturing the new face of Volkswagen is the signature grill embodying the VW emblem, chiseled front fascia and unique to the automaker rear tail lights, which all encase the ‘new look’ for easy recognition of the brand. The 2014 Volkswagen Touareg is no different in sportier its R-Line trim featuring a unique body kit, sport-tuned suspension and LED taillights. My 2014 Volkswagen Touareg R-Line features the standard 3.6-liter V6 engine generating 280 horsepower and 265 lb-ft of torque. The use of the V6 engine with a 15-degree configuration (VR6), now just a 10.6-degree V, pays homage to the long line of well praised narrow-angle 6-cylinder engines from Volkswagen produced over many decades. The use of the V6 (VR6) aids in consistent power output through the rpm band and a good amount of torque surging through the drivetrain at a relatively low rpm initially maxing out at just 2,500 rpm. 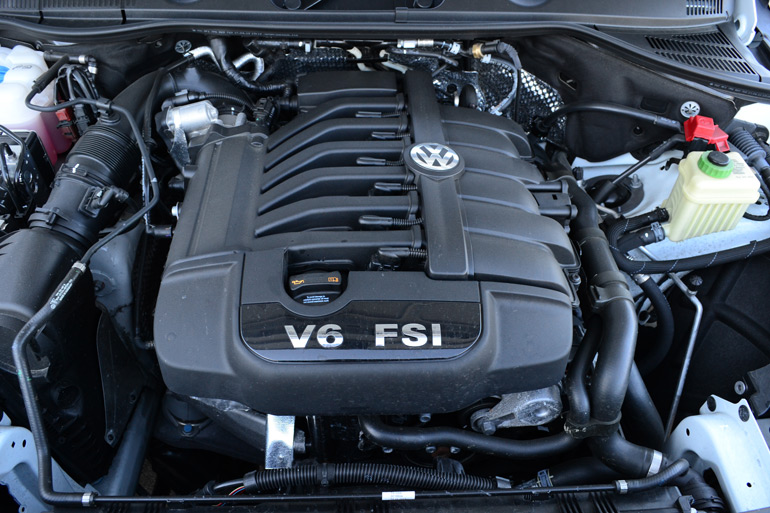 In terms of engine choices for the new Volkswagen Touareg aside from the standard V6, there remains the variety of a 3.0-liter turbocharged V6 diesel (TDI) with 204-horsepower and an abundance of torque at 406 lb-ft. In addition ,the Volkswagen Touareg Hybrid gets its own supercharged 3.0-liter V6 engine (333 hp/325 lbs-ft torque) paired with a 47 hp and 221 lbs-ft of torque electric motor for a total output of 380 horsepower and 428 lb-ft of torque, the obvious monster of the bunch but with a bit of extra weight (over 400 lbs. more than V6 R-Line trim). With the wide range of engine choices and a multitude of trim levels (Sport, Lux, R-Line, Executive and Hybrid), the new Volkswagen Touareg attempts to provide something to appease everyone in the premium crossover utility vehicle market. Moreover, the sporty R-Line trim can be had with the torque-monster TDI diesel engine. 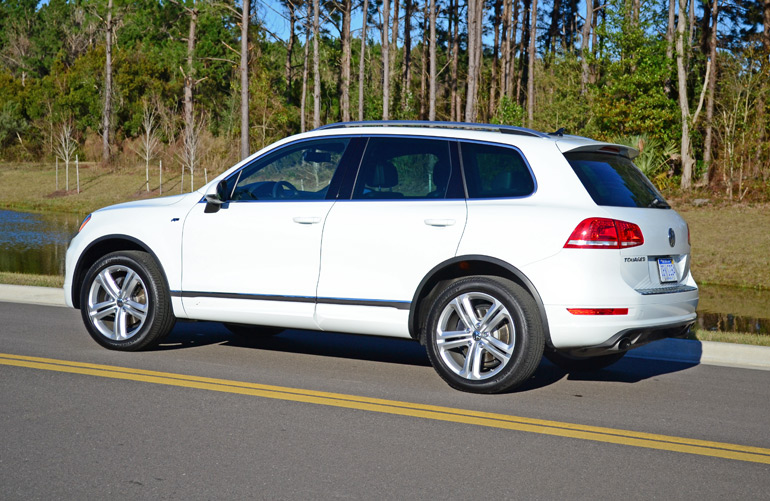 As far as the new 2014 Volkswagen Touareg V6 R-Line’s road-going mannerism, it is perceived to be an enjoyable experience over-all. The new Volkswagen Touareg R-Line hugs the road with its stylish 20-inch alloy wheels wrapped in beefy 275/45 R20 Continental rubber. The retuned sport suspension of the Touareg R-Line takes a different approach from other trims providing a stiffer and more planted ride. The suspension damning is somewhat aggressive but not to the point of being overly harsh at cruising speeds. With the benefit of the Touareg R-Line’s sport suspension, the handling and confidence instilled in you as a driver is reassured the instant you navigate through paved roads with a nicely weighted steering wheel, decent power fed through all four wheels and excellent braking performance due to large 13-inch brake rotors on in all four corners while the fronts get 4-piston calipers and 2-piston rear. 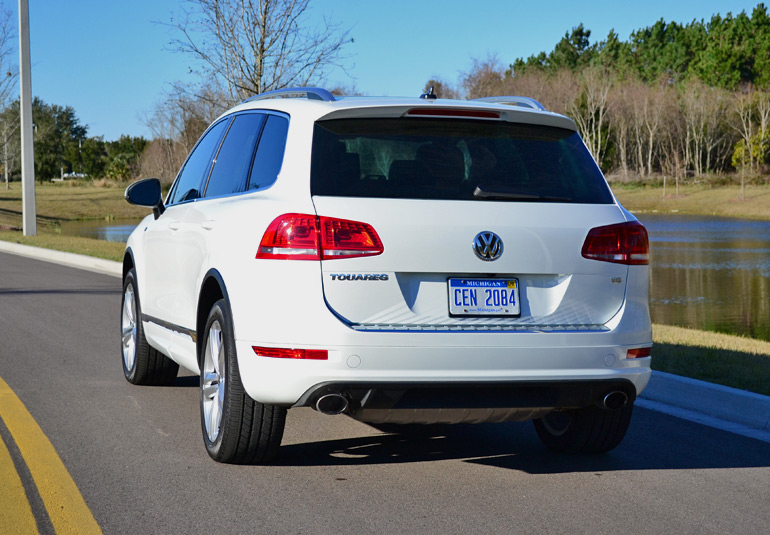 The 3.6-liter VR6 engine is nicely matched to a new 8-speed automatic transmission. Together the power delivery is adequate with a surprising initial surge through first gear to really move all 4,711 pounds of German engineering forward. Through all 8 forward gears the Touareg pulls nicely but not with the consistency of the extra grunt it exerts through first gear. Basically, after hitting 2nd gear the Touareg plays catch up to finish what little bit of the extra momentum was expended through the short 1st gear. Though, the Touareg does give you some confidence in overtaking vehicles on the highway and having the ability to tow up to 7,000 pounds is also an added plus. Another surprising aspect of the new 2014 Touareg R-Line is its sport suspension’s ability to keep the body roll to a minimum for an SUV of this stature. The size of the new 2014 Volkswagen Touareg is not realized until you sit in the cabin, which is highly competitive in over-all space among its direct competition exhibiting only 2 rows of seats. On the flip side of things, the Touareg R-Line’s competent road characteristics virtually shrink the SUV to emit a slight dash of nimbleness. A dedicated off-road mode takes the 4Motion full-time all-wheel-drive system to a new level through the adaptive Torsen center Limited-Slip differential. In normal on-road mode the power split is 40% front and 60% rear. Off-road mode will allow the split to vary dependent on where slip is detected to rout additional power to the wheels with grip. Additionally, off-road mode displays a dedicated steering angle meter on the dashboard. On the road-going prowl, the new 2014 Volkswagen Touareg V6 gets an EPA estimated 17 mpg city and 23 mpg highway. Though those are not impressive figures, I was able to better the highway mileage to get almost 24 mpg with an average of 23.7 mpg over a 25 mile local highway trip. Though, at interstate speeds the mpg average declines quickly to about 22 mpg traveling just above 70 mph. Around the city I saw a steady 17.2 mpg to match the EPA estimate. 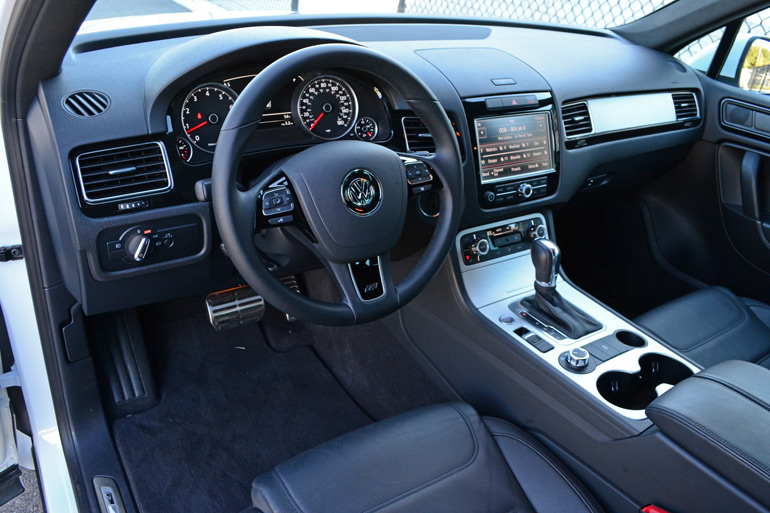 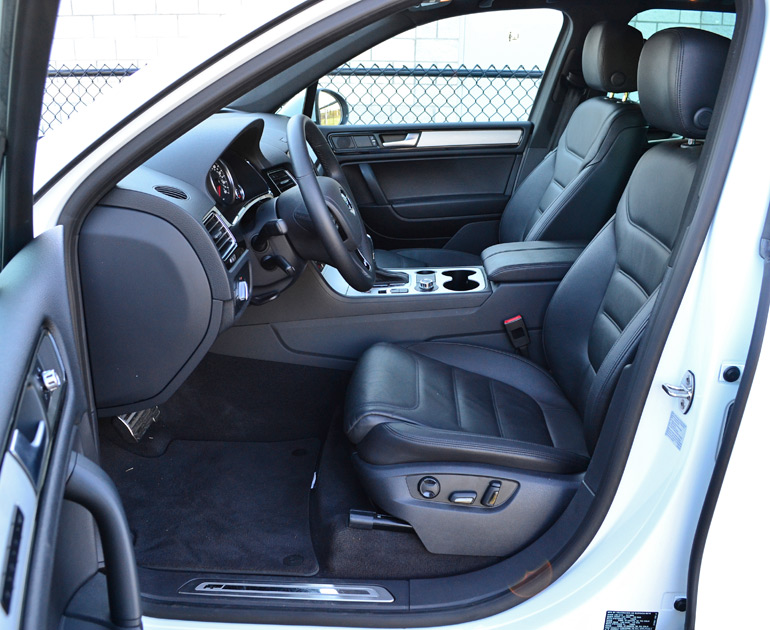 The interior is nicely appointed with decent fit and finish and a good use of contrasting soft-touch plastics with the brushed aluminum trim. Much of the button layout is easy to access without much of a guessing game while a slight redundancy of controls through the touch-screen and physical buttons give the driver and front passenger a choice of operation for some features. The latest iteration of Volkswagen’s GPS navigation system and integration of infotainment controls operates smoothly with added detail to roads. Advanced dragging functions also aid in its ease of use through an abundance of menu sets for system settings and over-all operation. The seating areas are spacious and substantial for 5 adults with enough cargo to fill up just over 32-cubic-feet of space with all seats in place. Folding down the 60/40 split rear seat backs, either manually or using the power release at the rear of the vehicle, allows for 64 cubic-feet of storage. 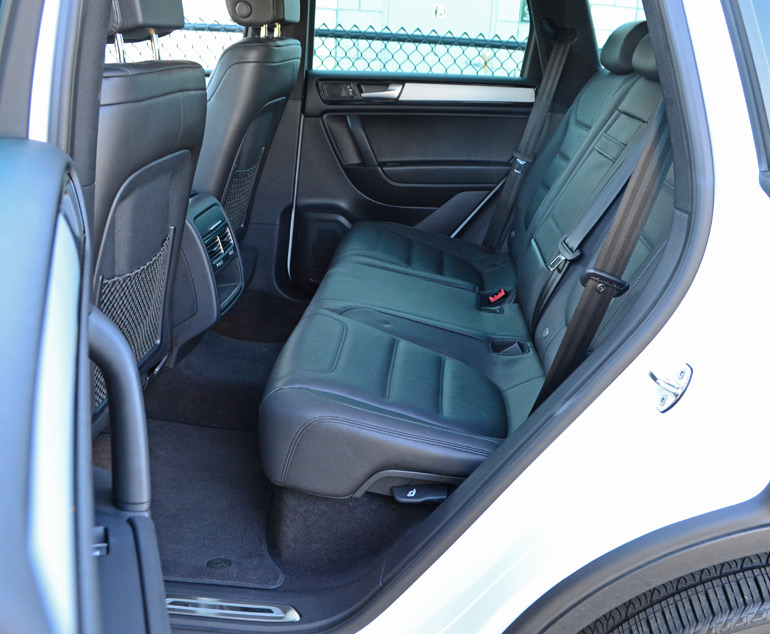 The 2014 Volkswagen Touareg is somewhat of an underdog in the full scheme of SUV offerings in its current segment. Being more focused on paved roads versus off-roading – more than it has ever been, places the Touareg in a position to go head-to-head with other midsized SUVs built to have the driving attitude of a car without taking too much away from the SUV versatility and ruggedness. As a luxury SUV, the 2014 Volkswagen Touareg R-Line provides more of a sportier side than many others in this class. The Touareg R-Line initially serves up sporty looks and ends with a unique over-all driving personality taken from the books of its German heritage. 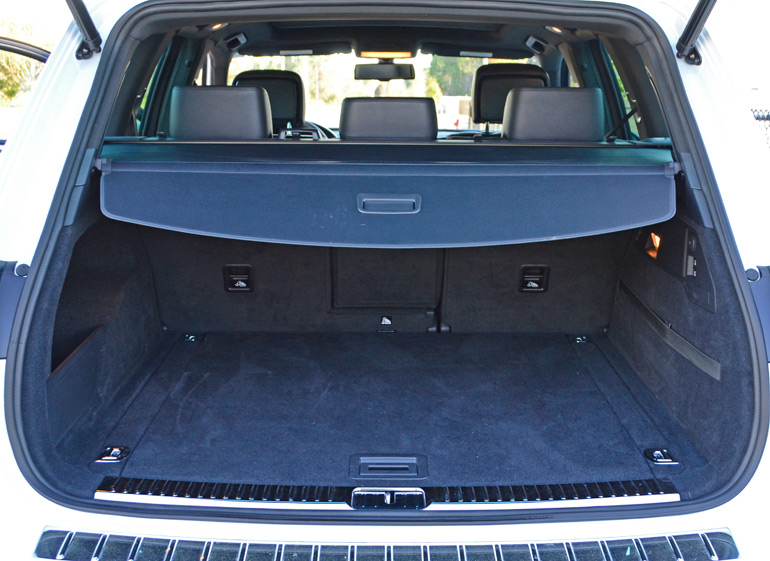