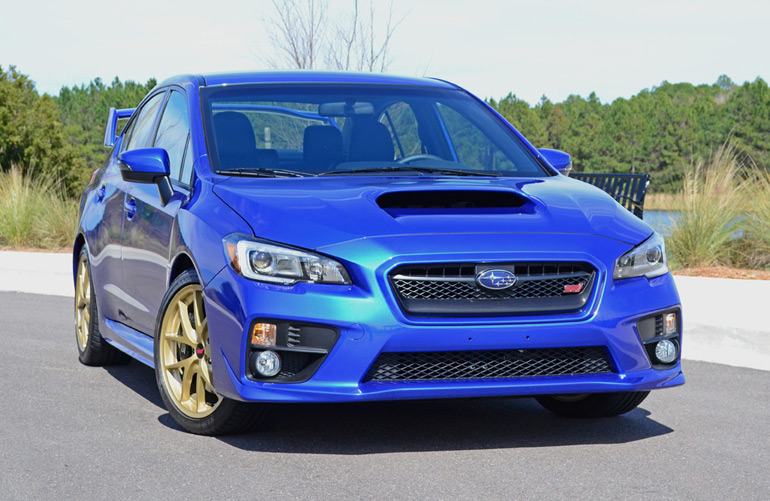 In my days of driving cars on the road and on the track, it becomes apparent each time of jumping behind the wheel of one that there is an ongoing performance-car balancing act to make everyone happy. This battle endures on the track and on those spirited drives down local roads. For many to even experience a vehicle that attempts to balance track life or every-day grocery-getter duties, a little extra cash is usually required. In the tradition of Subaru, curiosity has always sparked an interest in enthusiasts when it comes to the WRX STI, a relatively affordable and quick car that serves double duty without much of a fuss. All-new for 2015, the Subaru WRX STI embarks on a journey to bring that balancing act back into focus where it still lacks a definitive placement on the road or track, but that is a good thing. 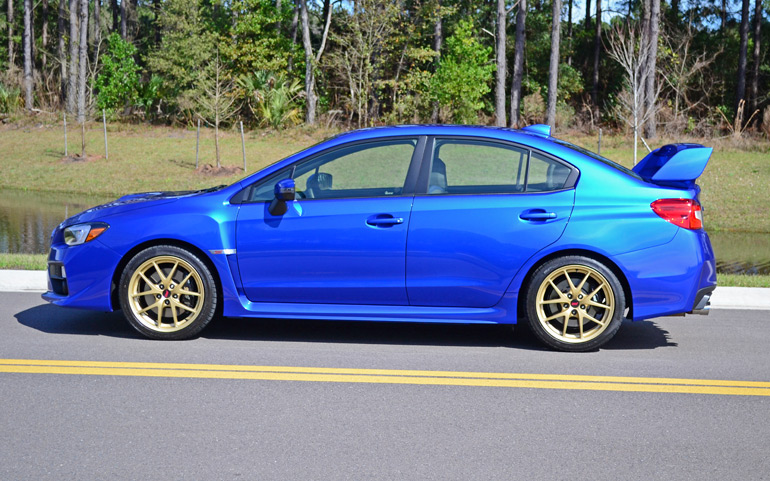 The all-new 2015 Subaru WRX STI is a gem of a car. I know that may sound a bit corny, but take my word for it, this is one vehicle that infringes upon the old ‘best bang for the buck’ statement. The 2015 Subaru WRX STI doesn’t reinvent what Subaru is known for in their symmetrical all-wheel-drive system and the rally-inspired disposition of their vehicles over many years. To put it one way, all other Subaru vehicles look up to the WRX STI with it being the king of performance for the brand and proudly wearing that title for the completely redesigned 2015 model. 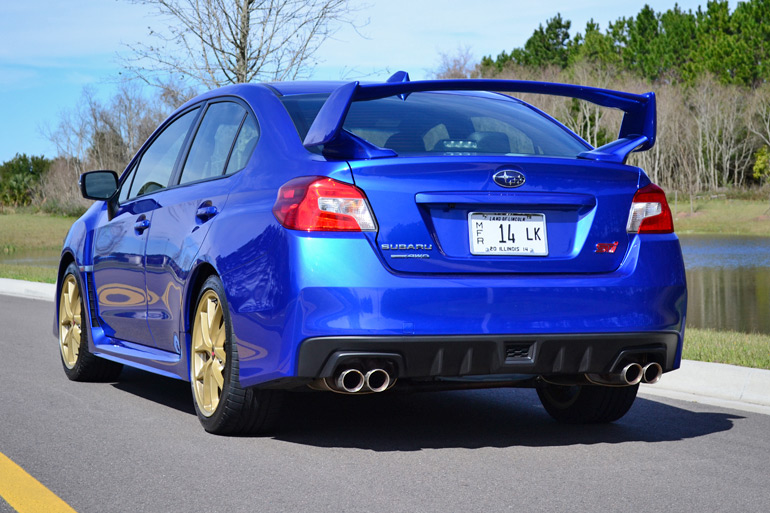 My adventure in the all-new 2015 Subaru WRX STI Launch Edition took me for a loop when I had to take the vehicle to a neighboring city a few towns west of Jacksonville, FL. I found myself driving what was first perceived as a much more solid and somewhat refined WRX STI than a 2013 model I drove last year. Of course there were many familiarities, those being mostly the good traits of the outgoing model. Though, the 2015 Subaru WRX STI was a new beast even though it carried over the 305 horsepower and 290 pound-feet of torque 2.5-liter turbocharged boxer 4-cylinder engine. That unique and delightful burbled sound was there, SI-Drive mode settings were there, and the adjustable limited-slip differential for its advanced all-wheel-drive system was there. Taking the 2015 Subaru WRX STI out on the road for the first time I noticed that the 6-speed transmission was somewhat familiar too, in a good way. The steering rack was a bit different, it was a tad quicker (13:1:0 ratio) through a retained hydraulic-assisted setup, taking only 2.5 turns from lock to lock – which is a major benefit for track days with this all-wheel-drive rocket. This 2015 Subaru WRX STI was just better in every way. 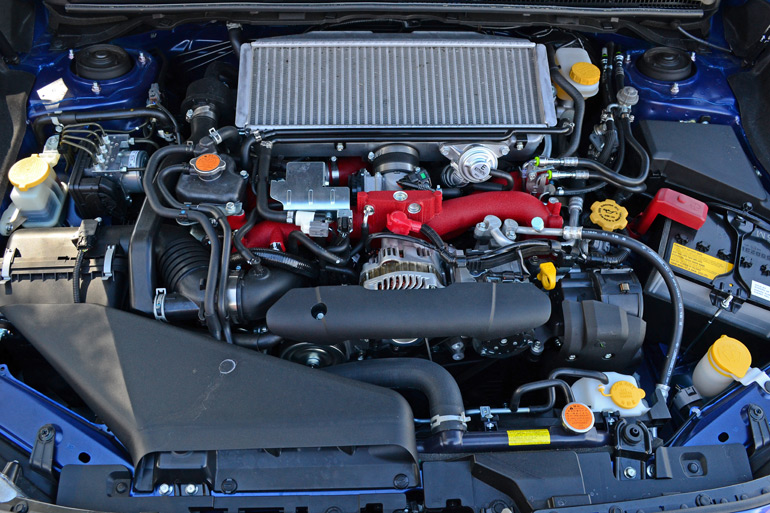 Power delivery from the 2.5-liter turbocharged flat-4-cylinder comes constrained in a specific rpm range, just as it always has. Though, power delivery is predictable especially above 3,500 rpm. Interestingly enough, power is plentiful just shy of redline at 6,700 rpm. In my estimate it seems as if power begins a slight drop off at 6,500 rpm, which is where I set the configurable shift-light and audible alarm to sound indicating my desired shift point. I will say it, achieving a consistent 0-60 mph time is not an easy task in the WRX STI. I saw times ranging from 5.8 seconds to a best at 5.2 seconds. The jury is still out on the 60 mph acceleration but rest assured, the new WRX STI is no slouch even though it has gained a minuscule 2 pounds (Launch Edition without power seats) from the last generation. Some will post times as fast as 4.6 seconds, either way, a 3rd gear shift is required to reach 60 mph.

It was only on my return trip to Jacksonville after about a 100-mile long haul that I really had time to experience what the 2015 Subaru WRX STI had to offer for performance. The highway drive was pleasing enough showing a nice livable and commuter side of the WRX STI. The RPM level remained high in 6th gear hovering around 2,800 rpm at 70 mph. Nevertheless, that was a good thing considering how the turbo spools up fast enough at that rpm to give you a nice surge of power when leaving it in 6th gear. The exhaust note from the quad-tailpipes didn’t drone or carry through the cabin much, or not nearly as much when the engine is just above idle (around 1,300-1,600 rpm). Stability was excellent at highway speeds and the ride may have been a bit harsh at times but not to the point of really making me uncomfortable while resting my posterior in the firmly supportive and heavily bolstered heated sport seats up front with alcantara inserts and leather trim. The firm suspension, however, is a joy to master around twisty roads at a decent speed especially having all four wheels pulling you out of turns. The new rigid chassis, a major improvement you notice if you recall a time you drove the last generation WRX STI, also aids to limit body flex and emanate a proficient handling dynamic. 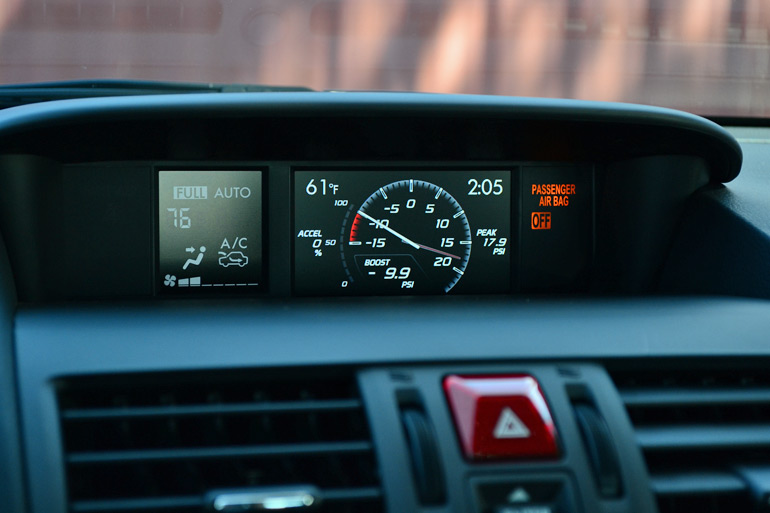 Pushing the new 2015 Subaru WRX STI to the limit is almost an unachievable goal in the confides of local roads. Though, you would want to assure that you have the wits to pull off an event where you break loose the sticky 18-inch 245/40 Dunlop Sport Maxx tires wrapping light-weight forged BBS wheels. Basically, the WRX STI emits a feeling of the vehicle being on rails. Putting the WRX STI into a sharp turn and holding it through the bend makes you appreciate its advanced center differential with six locking settings. With the center differential in auto mode and the power split set to a rear bias via a flip of the + / – setting into the minus position, the chassis still cooperates like an all-wheel-drive vehicle. To put it lightly, the WRX STI will still understeer at the mercy of its tires but reaching that point is a long stretch for lighthearted enthusiasts. Forget about oversteer, unless you are at the track. Even then, wagging the tail will only be coupled with a quick correction by use of the throttle as the center diff quickly sorts things out. Using the surge of torque to throttle the vehicle into turns is a pure delight as it carries through without any drama only pushing back at the slight adjustments and corrections of the center differential via Active Torque Vectoring, which utilizes an electronically managed continuously variable transfer clutch for distribution of power to the front and rear. Just make sure your paws are firmly planted on the leather-wrapped flat-bottom steering wheel – the WRX STI goes where you point it without giving you any second chances. Over-all, the WRX STI handles extremely well with as much as 0.98 g of lateral grip. Braking is strong, too – at the benefit of Brembo brakes and virtually no fade on heavy repeated stops. 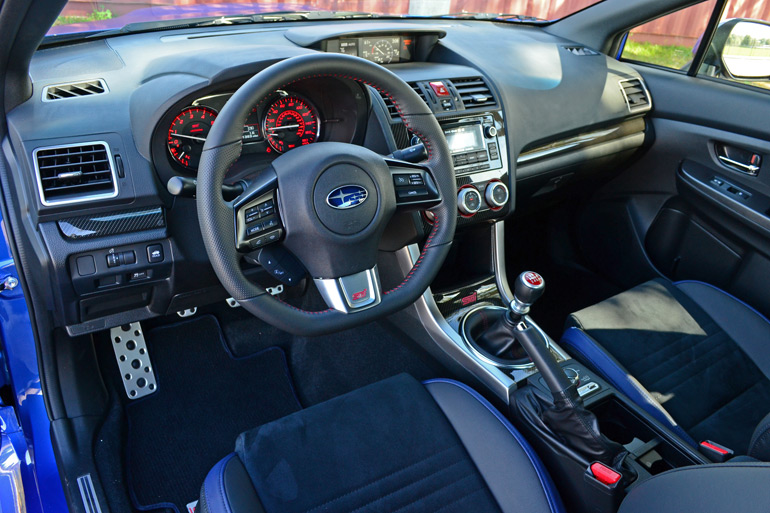 The 6-speed manual of the 2015 Subaru WRX STI is the only available transmission, which pays tribute to the WRX STI remaining a purist vehicle and a rarity in today’s automotive market. The clutch pedal travel was short and somewhat stiff but manageable for an enthusiast used to a vehicle that does not break the wheels loose on hard acceleration. Much about the all-new 2015 Subaru WRX STI has been repeated but with a touch of panache where the interior is no longer laced in plastic hell and some of the retained rawness of the outgoing model does not ruin the limited luxurious side of the WRX STI, if there really is such a thing. Still, you can enjoy the clatter and harmony of the drivetrain and exhaust in acceptable quantities. Inside of the new 2015 WRX STI you will find a padded dashboard, padded trim on the door panels, a new gauge cluster with a central color LCD information screen, center-dashboard color information LCD screen with an interactive boost gauge and dedicated dual-zone climate control readout. Within the center-dash information screen the rear-view camera is displayed as well as vehicle mpg and center differential power-split output diagram. Of course the mpg readout never saw a tick over 22 mpg during my time with the new 2015 WRX STI, even on the highway. It’s not to say the EPA estimated 17 mpg city and 23 mpg highway numbers are totally unattainable, it is just that the WRX STI is too much fun to land what is still an uninspiring number for any sedan. I will leave that test to whoever wants to waste their time and completely ignore the WRX STI’s eagerness to make you drive it like you stole it. 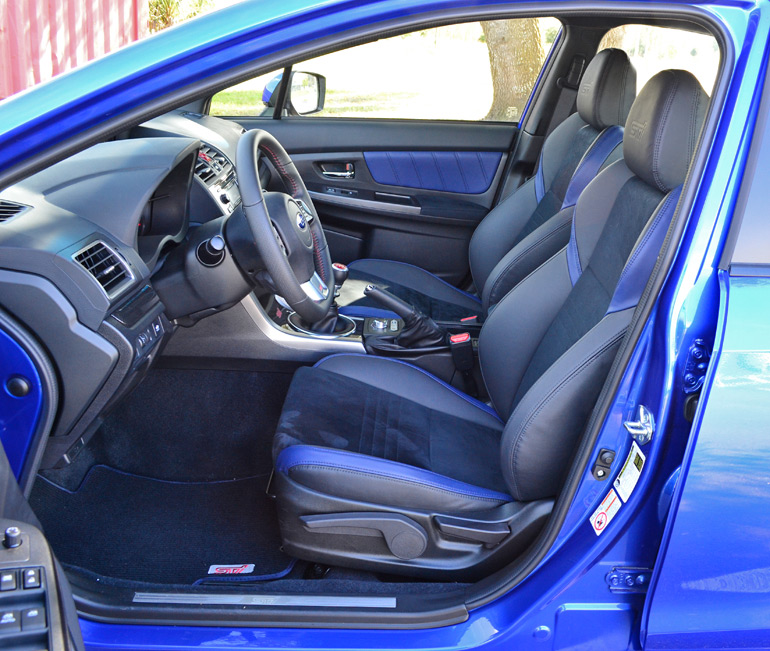 To summarize the welcomed redesign of the 2015 WRX STI’s interior, it is leaps and bounds better than the outgoing model. The seating area is usable for 5 adults, possibly by means of the middle-backseat passenger being a bit smaller than average to make way for a comfortable spot for each occupant. Visibility of the new 2015 Subaru WRX STI is also a slight improvement where my only qualm would be the massive rear spoiler, or in this case due to its size, the large ‘wing’. At times I found myself second guessing a quick check of my blind spot thinking that the rear wing was a vehicle. It took some getting used to but could you imagine how large my neck muscles will be after a week of those exercise in addition to the g-forces emitted on some daring and adventure drives I guessed up on a few back roads? 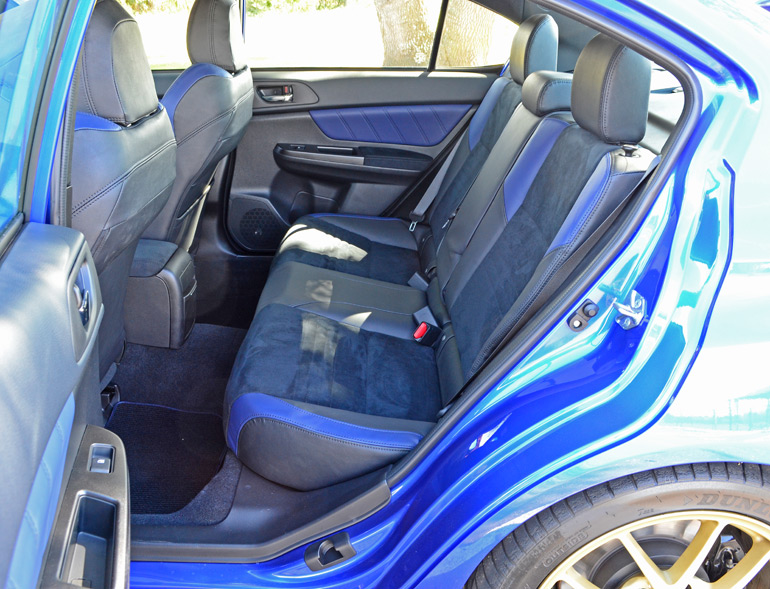 The Subaru WRX STI is where the automaker injects all of its fun attributes and sets the competition bar a bit higher in the perspective of compact sports cars. Subaru has done its homework and taken a few revamped pages from their inspired World Rally Championship STI (Subaru Tecnica International) roots over many years to make, in my opinion, the best vehicle carrying the STI badge for the street yet. Some will argue this point due to the newly sculpted design and front end housing LED low-beam headlights possibly resembling other vehicles. No doubt that the new 2015 WRX STI has been re-molded, refined, and assembled with some carry-over parts. To put it in perspective, the WRX STI was never a bad vehicle. Subaru has just taken that formula and reworked it for a better outcome while retaining many principles as to avoid making it unrecognizable visually and performance wise. Moreover, the price point has remained to stay in a respectable range starting at $34,495 for the all-new 2015 Subaru WRX STI base trim.