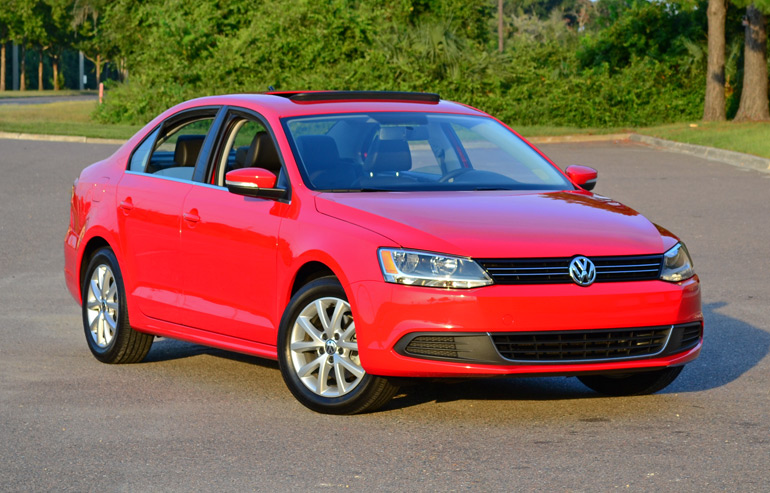 The Volkswagen Jetta has always been a steady constant in the brand, signifying much a vehicle that was always something extra when pitted against its compact-sized competition. The latest Volkswagen Jetta does away with its 5-cylinder engine for the company’s 1.8-liter turbocharged 4-cylinder, which is an excellent choice considering the excellent efficiency and respectable power output. 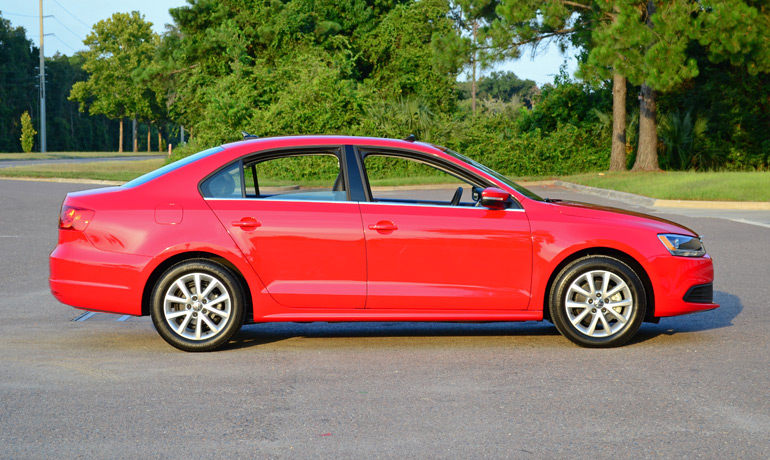 Having many trim levels (S, SE, SEL, Hybrid, GLI) and the choice between a TDI Diesel engine, base 2.0-liter 4-cylinder, a new 1.8-liter turbo 4-cylinder, or the 2.0-liter turbo 4-cylinder (210-hp) in the GLI trim, the Volkswagen Jetta aims to attract to a wide audience. In my 2014 Jetta SE test vehicle with Connectivity & Sunroof packages, the 1.8-liter turbo 4-cylinder engine proved to be the lively part of the vehicle with its 170 horsepower and 184 lb-ft of torque sent to the front wheels through a 6-speed automatic transmission. The ideal powertrain choice is the 1.8-liter turbo due to its excellent fuel efficiency getting an attainable EPA-estimated 25 mpg city, 36 mpg highway and 29 mpg combined. That’s better than the anemic 2.0-liter 115-horsepower base engine, conjuring up only 24 mpg city and 32 mpg with the automatic transmission. So, you get more power and better fuel economy. Kudos to the turbo Jetta. 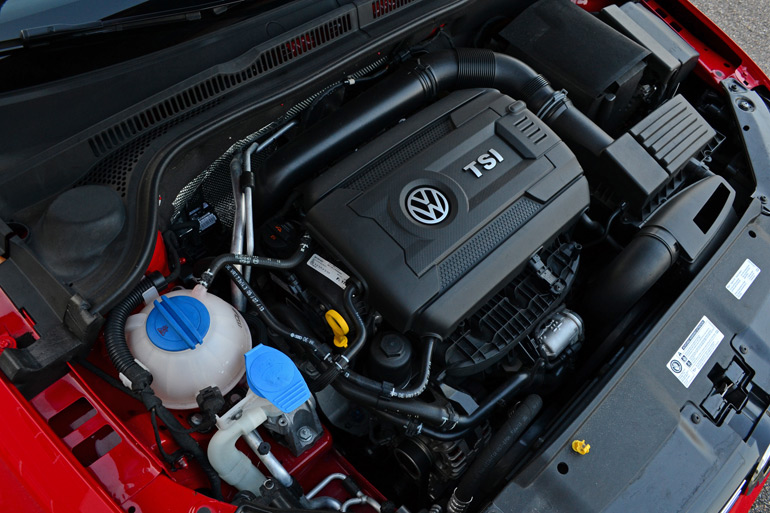 The eagerness of the new 1.8-liter turbo engine overshadowed some of the new Jetta’s visual shortcomings in its over-all interior appeal. In the full scope of its performance, the new VW Jetta 1.8 turbo outshines the outgoing 2.5-liter 5-cylinder by far. Acceleration is strong and the gearing ratios of the 6-speed auto box allow the engine to muster out its full potential without landing in an improper gear when power is quickly demanded. 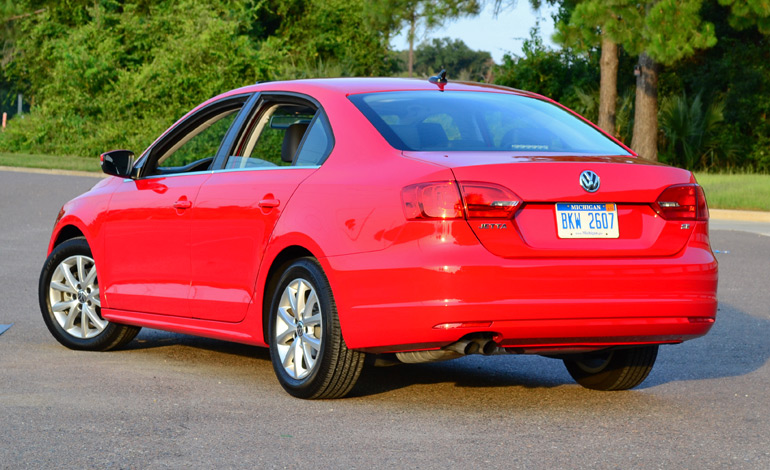 The 6-speed automatic does have a slight hiccup in its creep function and limited slippage of the torque converter when in Drive mode. Basically, creeping out from a stop has a slight delay and unwanted surge, somewhat like various automated dual-clutch units exhibit. This goes away by placing the transmission into Sport mode or using the manual shift mode through the floor shifter. Through each shift the transmission has a direct feel aiding to the Jetta’s overall fuel efficiency and sport delivery of power to the front wheels. There is an actual DSG dual-clutch unit available for the Jetta but only in the 210-horsepower GLI trim or TDI version.

Ride comfort and handling is on par for what you expect out of the compact segment. Additionally, the Jetta with the 1.8-turbo engine is nearly a class above its direct competition in the aspects of its handling and road feel. The electric steering is somewhat of an off-thrill moment with its lack of feedback from the road. Still, the over-all riding and handling dynamic is among the best in its class, thanks in-part to the addition of independent rear suspension for this model year. 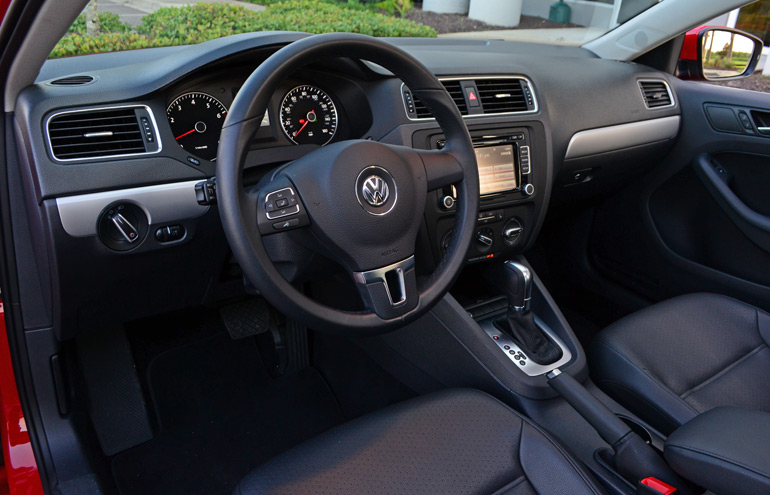 Inside of the 2014 Volkswagen Jetta things remain mostly the same since its redesign in 2011. The addition of VW Car-Net telematics with access to emergency services and an available review camera cap off some of the additions for equipment. Here, the mostly uninspiring part of the Jetta, the interior lacks in fulfilling any love from enthusiasts or even those who enjoyed the previous generation Jetta. The interior, more like a college dorm room than a picnic table with your favorite food, is made up of mostly hard plastics and leatherette seats that stick to your bare legs, failing to cool quickly on hot days. In this unfortunate backwards-motion perception of the Jetta’s interior, the driver’s gauge cluster and simplistic infotainment system fed through its smallish color LCD touchscreen are some of the inspiring parts of the dashboard, actually, the only inspiring parts. Nevertheless, the driver’s seat is manually-height adjustable whereas the seatback is the only “power” part of the seat. Yes, you can call it a two-way adjustable power seat, that’s fair. 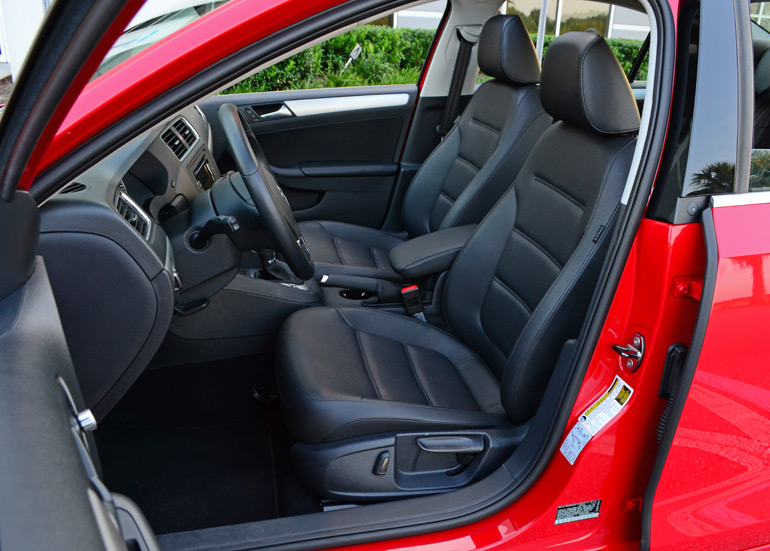 The lack of a USB port in the ‘connectivity’ options part leaving me with just an outdated iPod adaptor is the vanilla icing on my cheese burger, it doesn’t jive. I guess the Bluetooth audio streaming makes up for it with a refreshing drink to aid in digesting this unpalatable meal. 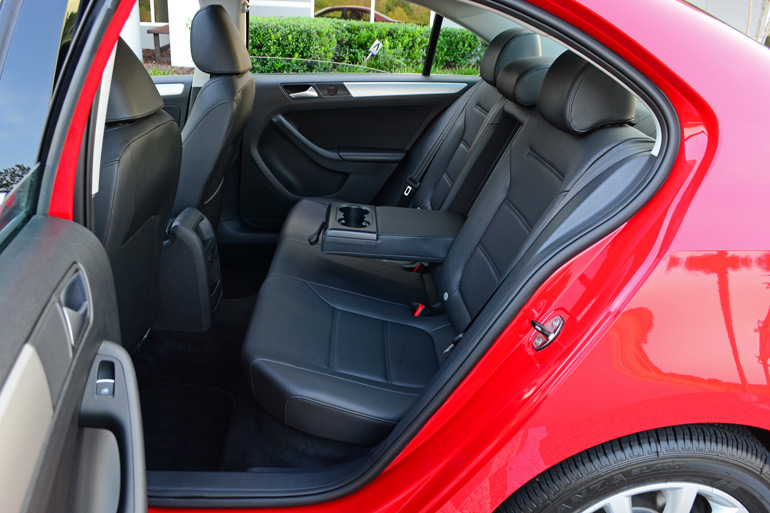 Even though the initial perceptions of the Jetta’s interior is less than thrilling, for all trim levels except the TDI and GLI – those utilize a few upgrades and higher quality materials – it proves to be very functional in that it has class-leading space nearly venturing into the midsized sedan category. Over-all, the Jetta SE with the 1.8-liter turbocharged engine is a good average-run compact that provides an extra bit of space for full-sized adults over its compact-sized competition. Even the trunk opens up to a vast 15.5 cubic feet and accessing it through the 60/40 split seat backs give you even more open-space versatility. 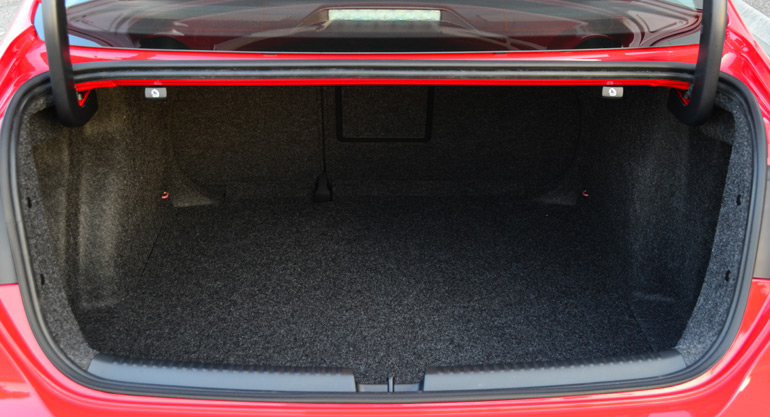 The new 2014 Volkswagen Jetta in the SE trim with connectivity & sunroof options, is an average run-of-the-mill compact sedan that puts its extra interior room and inspiring turbocharged engine at the forefront. Not to mention, when you consider the optional power-sliding-tilt sunroof and connectivity options in the SE trim, adding 16-inch alloy wheels, heated windshield washer nozzles, leather-wrapped steering wheels, Bluetooth phone connectivity and audio streaming, heated front seats with lumbar adjustment, upgraded sound system with a touchscreen, SD memory card reader, keyless entry/ignition and the Car-Net telematics, the Jetta becomes equipped as you would expect it out of the gate.

Pricing for the 2014 VW Jetta starts at just $17,715 including a $820 destination charge for a base 115-horsepower 5-speed manual trim. Moving up to my VW Jetta SE with connectivity and sunroof options, the as-tested price comes out to $24,315, which is still a respectable price point, only if you intentionally make the best of what the Jetta has to offer.