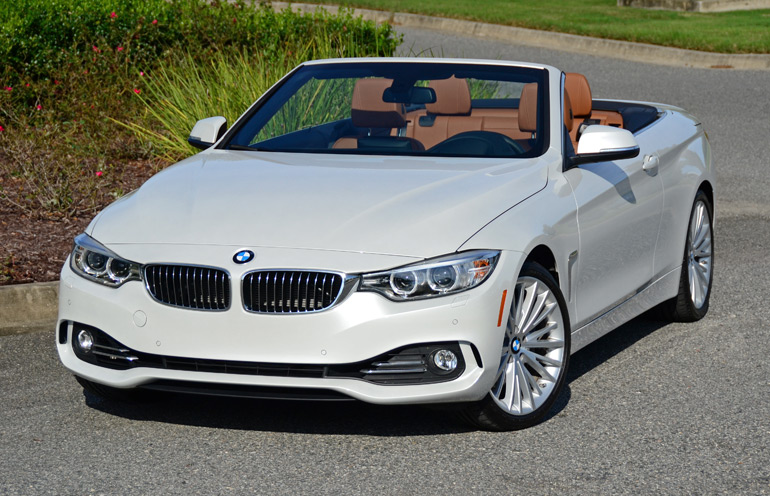 I can remember my first time driving a convertible. It was an early 90’s BMW 325i soft-top one of my friends “borrowed” from his father. Up to that point, I had not had any opportunities to experience convertibles or any of the “benefits” that come with them. Funny enough to say, the ambient noise from the thin fabric top of my friend’s family BMW convertible caught me off guard as I thought the surprisingly loud road noise indicated something wrong with the vehicle. More distress to our “borrowing” experience arrived when my friend announced that he didn’t ask permission to take his dad’s BMW out for a cruise. After putting two and two together and calming my nerves, the noise became common placed and I let the little bit of hair I had blow in the wind.

Convertibles have never been a favorite of mine. Still, I completely get the practicality of letting a top down to enjoy the sunlight, cool breeze or a star-filed night sky while making it to your destination. With the introduction of hard-top convertibles, it brings about the best of two worlds, blended to near perfection in vehicles like the all-new 2014 BMW 435i Convertible.

Manufacturers take pride in their line of convertibles and the hardtop convertible is one that has now been coveted in its offering in the security and insulated cabin of a normal coupe yet has the functionality of a full drop-top ready to go topless in a matter of seconds. The 2014 BMW 435i is among the best of hard top convertibles within its luxury sports coupe segment. It has a powerful turbocharged 3.0-liter inline-6 cylinder engine mated to a ZF-sourced 8-speed automatic transmission and a chassis that commits to staying true to its nicely balanced and well-handling roots. The 8-speed transmission is direct in its feel and never hunts for gears mostly landing in the proper cog when power is demanded. Manual shift paddles or use of the floor shifter allow you to bang through each gear to your desire, though with some computer override action for upshifts in all modes except sport plus. In case you are wondering, a German-made ZF-sourced transmission is good thing, among the best in the business for an automatic transmission, which enthusiasts desire if they can’t get a manual transmission. 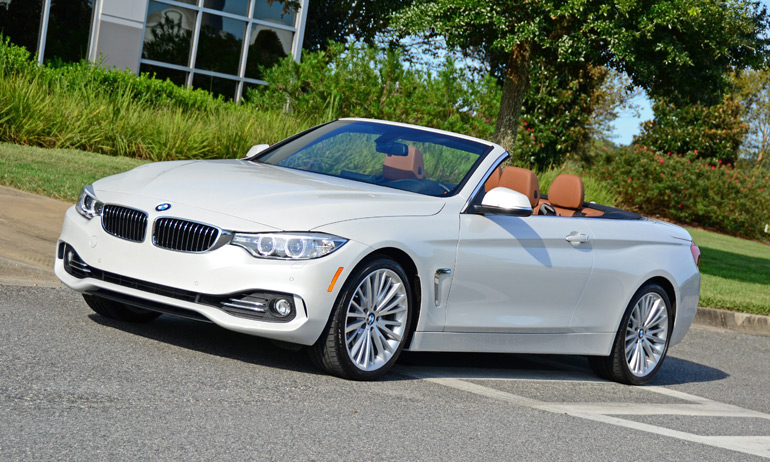 The 2014 BMW 435i Convertible picks up where the outgoing 3 Series Convertible left off. Using the 4 Series designation brings about a new design of BMW’s prided luxury sports coupe with a power hard top that retains some good looks of the coupe, yet offers a top that can be lowered when traveling up to 11 mph with the press of a button taking about 20 seconds for full fold. The power top may be a cause for some concern when performing its transformer-folding act into the trunk if you find yourself at a red-light nearing the end of its cycle. Those 20 seconds might turn into a friendly horn-honking session by the drivers behind you. Nevertheless, the power folding aluminum hard top does its seamless folding act without being clunky or noisy. 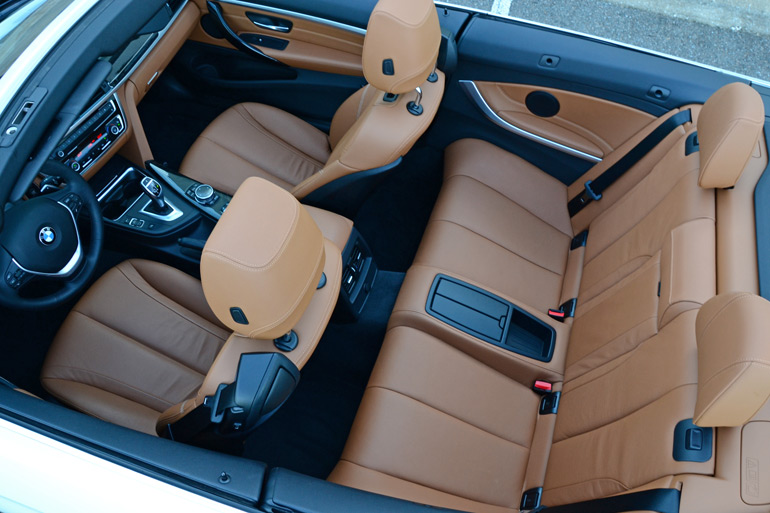 Speaking of noise, when up the hard top isolates the surrounding environment just as well as its coupe counterpart. That best of two worlds in the BMW 435i Convertible comes to full fold, pun intended. Of course, as expected, trunk space becomes extremely limited with the top folded. To the benefit of the 435i Convertible, some storage is made available if you plan on refraining from those top-down excursions. There is a nice movable partition in the trunk to designate storage area in the event you wish to pack a couple short bags and still let the top down. 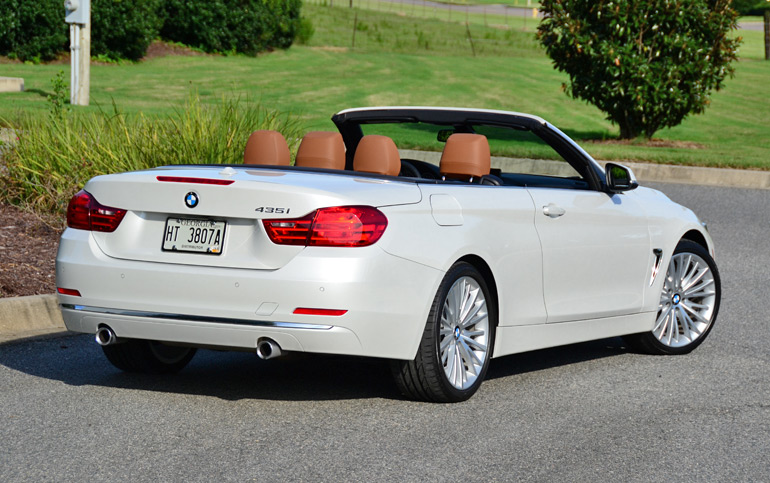 Folding the top down and cruising around town is a pleasurable experience and the 435i Convertible has neck warmers that will keep occupants up front delighted for the cooler seasons. That makes those cool drop-top nights or light winter days all the more enjoyable, extending your top-down fun through more than just the spring and summer months. 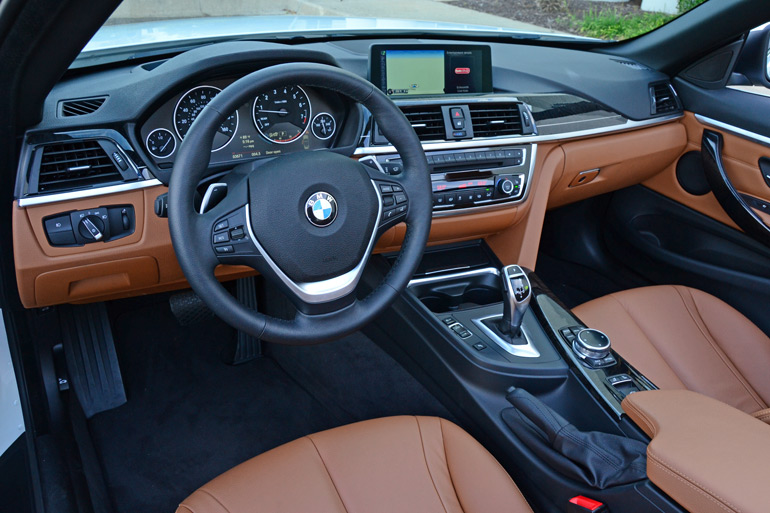 BMW’s expected enthusiastic driving character remains well intact in the new 435i Convertible. Taking the turbocharged 3-liter six-cylinder engine from the 435i coupe, producing 300 horsepower and 300 lb-ft of torque, thrusts the Bavarian drop-top with authority. Found equipped on my 435i Convertible test vehicle as an option is the M Adaptive Suspension as part of the Dynamic Handling Package, taking the reinforced chassis of the 4 series convertible to a new height with a willingness to not allow the nearly 500 extra pounds over its coupe sibling that it carries around to upset the ride and handling abilities. After all, this is a BMW and I would expect nothing less. And yes, it delivers in making you feel like a champ on the road. 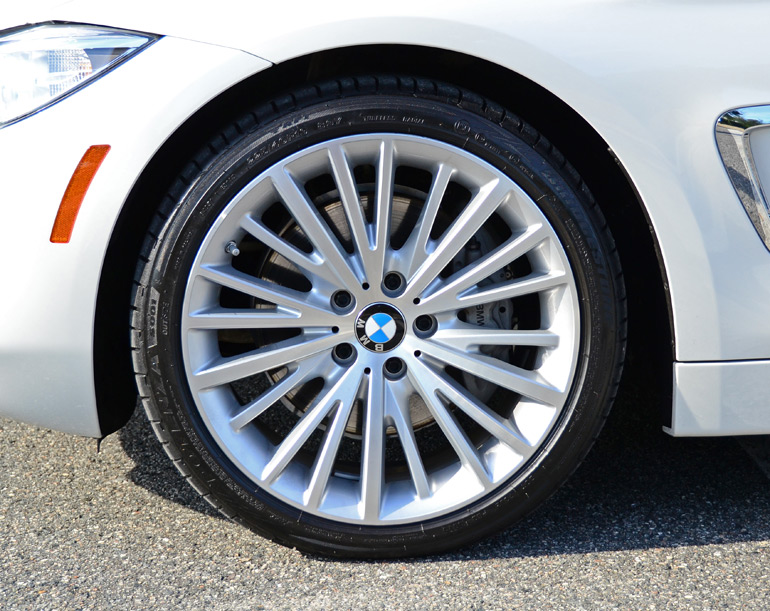 Zero to 60 mph comes in at a relatively quick 5.2 seconds. At such a performance level, fuel economy is quite respectable at an EPA estimated 20 mpg city, 30 mpg highway and 24 mpg combined, which are easily obtainable features even when you do not utilize the standard stop-start technology. The start-stop system proved to be quick and concise but somewhat startling at times due to the sound and harshness of the engine restarts. Still, the BMW 435i Convertible remains to be an intricate package shadowed by luxury and performance features that don’t leave many stones unturned for what consumers look for in a true luxury sports convertible.

The extra weight can actually be felt slightly over something like the new 2014 BMW 428i and 435i Coupe, but mostly when in the default suspension mode where the adaptive dampers are at their softest setting. The desired setting would be Sport, where the dampers stiffen slightly to prevent unwanted body roll and bounce. The totality of the 435i Convertible’s good ride and handling qualities pay attribute to its exclusive spring rates and over-all tuning to dial in a vehicle weighing 4,023 pounds. Bringing things to a stop is ensured in the 435i Convertible’s brakes with 4-piston calipers up front and single piston out back. Braking comes in about 110 feet from 60 mph.