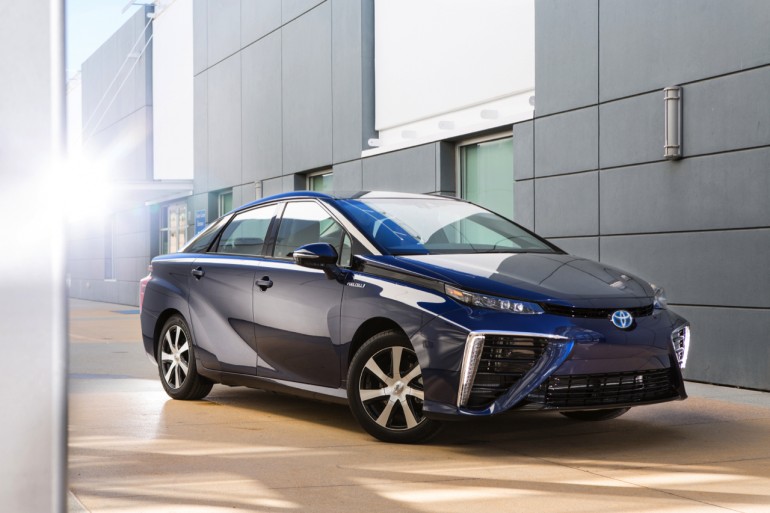 I can recall when the Toyota Prius made its debut in the United States. Many were skeptical of the idea and it took a while for the complete scope of what the Prius had to offer to really catch on. Once it did catch on, the Prius paved the way for hybrid vehicles as we know them today and has been the major staple for the Eco-minded and “Green” movements that thrive in many different platforms in the automotive world.

With the fast movement of technology and how it has wrapped itself around our day-to-day lives in just about every aspect you can think of, there is bound to be a new forefront in what literally drives automobiles. Toyota has been an innovator in this aspect for many years and they have set out to once again be the force that introduces something new that will inevitably be a new wave of the future as the Prius has been. In comes the Toyota Mirai, meaning “future” in Japanese, a new fuel cell electric sedan that utilizes fuel cell technology coupled with electric motors. The Mirai will be touted as a directed competitor to internal combustion engine vehicles and the very first mass-market fuel cell car. 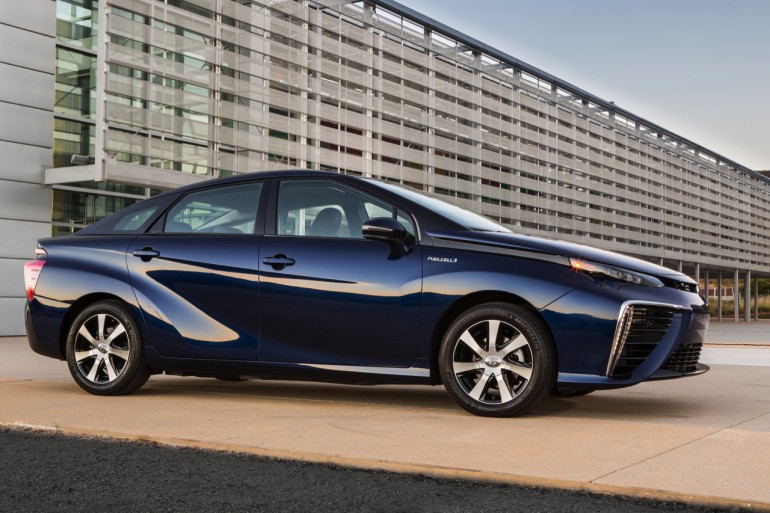 In the basic operation of the Toyota Mirai’s fuel cell technology, it all works much like a battery electric vehicle without the large drive battery. The fuel cell stacks combine hydrogen gas from takes with oxygen to produce electricity to power the electric motors.

I can already guess what you are thinking – hydrogen isn’t safe or you may think that hydrogen gas contained in an automobile during an accident is mobile bomb. Well, in retrospect, all gas-powered internal combustion engine cars on the road today are little bombs as gasoline is one of the most flammable substances around. Sure, you already know all of this stuff, but I will do my best to explain why the new Toyota Mirai Fuel Cell Electric Sedan might be the future Prius. 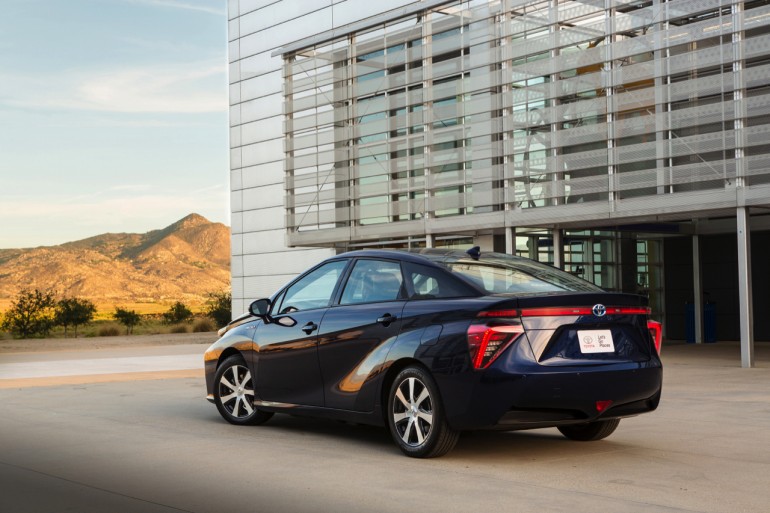 Toyota has developed a proprietary fuel cell stack that fits under the front driver and passenger seats of the Mirai. All that has gone into the fuel cell stack has been in development in Japan from the early 1990s. So far, fuel cell vehicles have been subjected to over a million miles of road testing. Some of the testing here in North America consisted of thousands of logged miles in extreme conditions, including Death Valley heat conditions, Yellowknife, Canada cold testing, steep hill grades in San Francisco and even high altitude trips in Colorado. 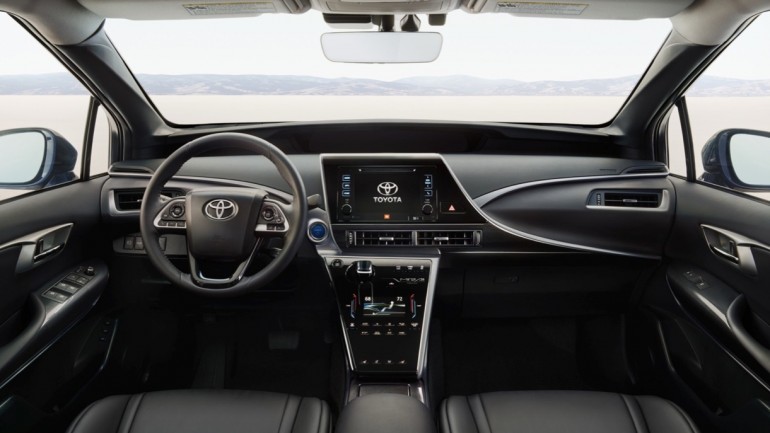 When it comes to the perceivable crash in a fuel cell vehicle, folks tend to get a bit nervous. Rest assured, Toyota has done plenty of research and development on this end, too. Fuel cell vehicles, including the Mirai, have been subjected to extensive crash testing in just about any conceivable case. Moreover, I am pretty convinced that our government wouldn’t let such a vehicle on our public roads if it didn’t meet and/or exceed safety tests. Well, until they roll out a recall. All joking aside, the Toyota Mirai will be just as safe or safer than your Toyota Camry – it even has proactive safety features, such as vehicle pre-collision, lane departure alert, blind spot monitor, drive start control and automatic high beam headlights.

The proprietary fuel cell stack will provide the vehicle with one of the world’s best power outputs of 3.1 kW/L giving the electric motors a maximum output of 153 horsepower and a 0-60 mph time of 9.0 seconds. Be that those initial performance numbers aren’t going to catch anyone by surprise, other than the gas-powered vehicles honking behind you to move out of the way, The Mirai won’t emit any emissions other than water vapor. The honking may also be due to the controversial exterior design of the Mirai. Most folks will either love it or hate it. 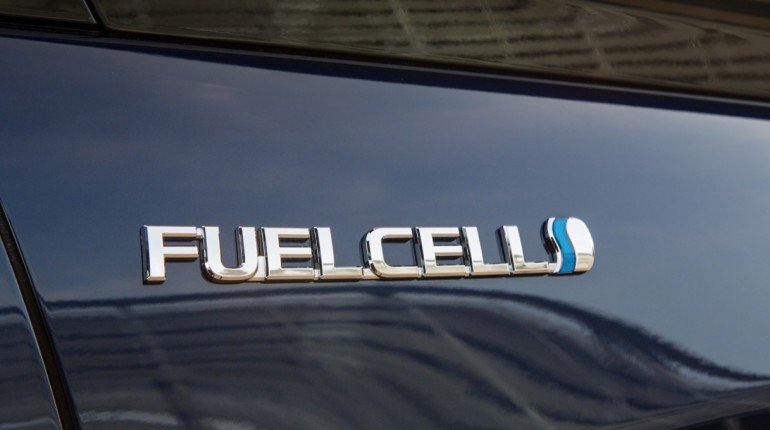 Embracing fuel cell technology will be a long process as the necessary hydrogen refueling stations network is built. Without that, fuel cell technology is dead on arrival to put it bluntly. However, in the scope of how the Toyota Mirai will be a true zero-emissions vehicle that can be fueled at a local hydrogen station, possibly at many local gas stations retro-fitted to supply such, there may be some serious support and backing from the least expected. The theory and thought of oil companies jumping behind this is not as far-fetched as you may think. If there is money in it for them, they will come. 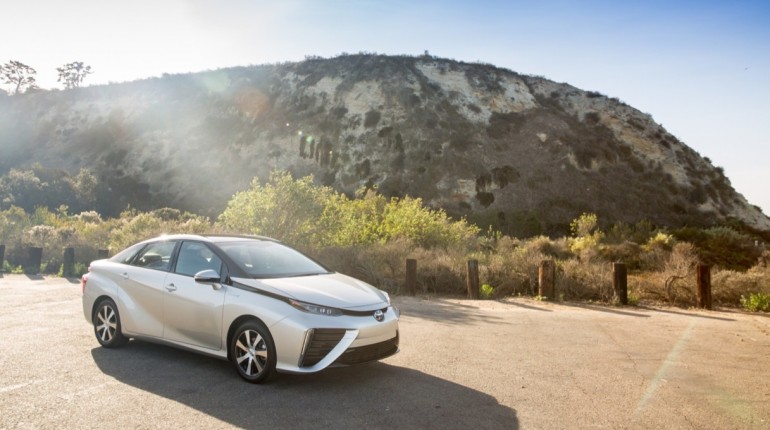 The way regulations are coming down on vehicle manufactures, something will budge and the Toyota Mirai may be another first to break through the seams just as the Toyota Prius did for gas-electric hybrid vehicles. At a price of about $57,000 for the new Toyota Mirai and an $8,000 federal tax credit ($49,000 total price after credit), there is still much to be reserved about in this virtually endless debate. Time will tell.

The Toyota Mirai Brings the Future to Your Driveway

The Toyota Mirai is a four-door, mid-size sedan with performance that fully competes with traditional internal combustion engines – but it uses no gasoline and emits nothing but water vapor. The groundbreaking fuel cell electric vehicle is powered by hydrogen, re-fuels in about five minutes, and travels up to 300 miles on a full tank.

Mirai will be available to customers in California beginning in fall 2015, with additional markets tracking the expansion of a convenient hydrogen refueling infrastructure. Powered by an industry-leading fuel cell electric drivetrain and supported by an exceptional 360-degree ownership experience, Mirai marks a turning point for consumer expectations for a zero-emission vehicle.

Making its Mark with Performance

In its basic operation, a fuel cell vehicle works much like a battery electric vehicle. But instead of the large drive battery, Mirai’s fuel cell stack combines hydrogen gas from tanks with oxygen to produce electricity that powers the electric motor.

Toyota’s proprietary fuel cell stack represents a major leap forward in performance, delivering one of the world’s best power outputs of 3.1 kW/L at a dramatically reduced size that fits under the front driver and passenger seats. The system provides Mirai with a maximum output of 153hp, accelerating from 0-60 in 9.0 seconds and delivering a passing time of 3 seconds from 25-40 mph.

What’s more, thanks to fuel cell technology’s versatility and adaptability, the Mirai offers performance options that go well beyond a traditional automobile. In fact, the vehicle will be offered with an optional power take off (PTO) device that enables Mirai to serve as a mobile generator in case of emergency. With the PTO accessory, Mirai is capable of powering home essentials in an average house for up to a week in an emergency – while emitting only water in the process.

Toyota began fuel cell development in Japan in the early 90s and have developed a series of fuel cell vehicles, subjecting them to more than a million miles of road testing. In the last two years alone, fuel cell test vehicles have logged thousands of miles on North American roads. This includes hot testing in Death Valley, cold testing in Yellowknife, Canada, steep grade hill climbs in San Francisco and high altitude trips in Colorado. The Toyota-designed carbon fiber hydrogen tanks have also undergone extreme testing to ensure their strength and durability in a crash.

This extended legacy of research and development is reflected in Mirai’s safety and reliability. At Toyota’s advanced Higashifuji Safety Center, the vehicle has been subjected to extensive crash testing to evaluate a design specifically intended to address frontal, side and rear impacts and to provide excellent protection of vehicle occupants. A high level of collision safety has also been achieved to help protect the fuel cell stack and high-pressure tanks against body deformation.

Focused on the Consumer

Toyota believes that outstanding vehicle performance must be matched by an exceptional ownership experience. And Toyota is committed to delivering on that promise.

When it hits the market in 2015, customers can take advantage of Mirai’s $499 per month/36 month lease option, with $3649 due at lease signing, or purchase the vehicle for $57,500. With combined state and federal incentives of $13,000 available to many customers, the purchase price could potentially fall to under $45,000.

The vehicle will be matched by a comprehensive, 360-degree Ownership Experience offering a range of services, including:

In addition, Toyota continues to support the development of a convenient and reliable hydrogen refueling infrastructure.

Research at the University of California Irvine’s Advanced Power and Energy Program (APEP) has found that 68 stations, located at the proper sites, could handle a FCV population of at least 10,000 vehicles. Those stations are on their way to becoming a reality. By the end of 2015, 3 of California’s 9 active hydrogen stations and 17 newly-constructed stations are scheduled to be opened to the general public, with 28 additional stations set to come online by the end of 2016, bringing the near-term total to 48 stations.

Nineteen of those 48 stations will be built by FirstElement Fuels, supported by a $7.3 million loan from Toyota. The company has also announced additional efforts to develop infrastructure in the country’s Northeast region. In 2016, Air Liquide, in collaboration with Toyota, is targeting construction of 12 stations in five states – New York, New Jersey, Massachusetts, Connecticut, and Rhode Island.