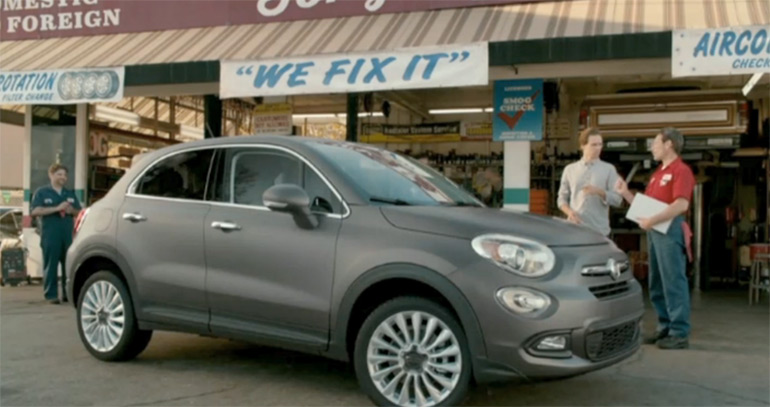 Just about every auto maker has some type of official slogan and some have those old sayings that are expressed to pay homage to negative connotations. As such, Ford has had their fair share with many sayings, such as “Found On Road Dead” or “Fix Or Repair Daily.” Fiat, even since their entry into the United States, has shared their old saying of “Fix It Again, Tony.” Fiat, in an attempt to address this elephant in the room, has conjured up a clever commercial advertising their all-new 500X.

I can honestly say, Fiat vehicles are truly different and they have their own unique character that turns heads here in the states, mostly in good ways when it comes to consumers seeking to break away from the norm. To address those decade-old quality concerns that have carried with the name and the “Fix It Again, Tony” saying, Fiat is taking this “issue” head on to say they proudly “fixed it.”

Fiat repeatedly has been the lowest ranking mass-market brand on quality surveys by Consumer Reports and J.D. Power and Associates.

But in his presentation introducing the 500X to North America at the Los Angeles Auto Show last week, Francois said it was time to retire the perception that Fiat has poor quality.

The commercial, he said, “features a skeleton in the closet, the elephant in the room. His name was Tony, and he had to go,” Francois said.

“To go global, our No. 1 priority is world-class quality,” the Frenchman said, before ticking off the hours spent on the design, engineering and testing of the 500X.

“This is why we redesigned the Melfi [Italy] plant,” Francois said. Both the 500X and its platform mate, the Jeep Renegade, are built in Melfi and exported to the United States.

The Fiat 500X is expected to arrive in U.S. showrooms during the second quarter of 2015. Its pricing and fuel economy were not announced.