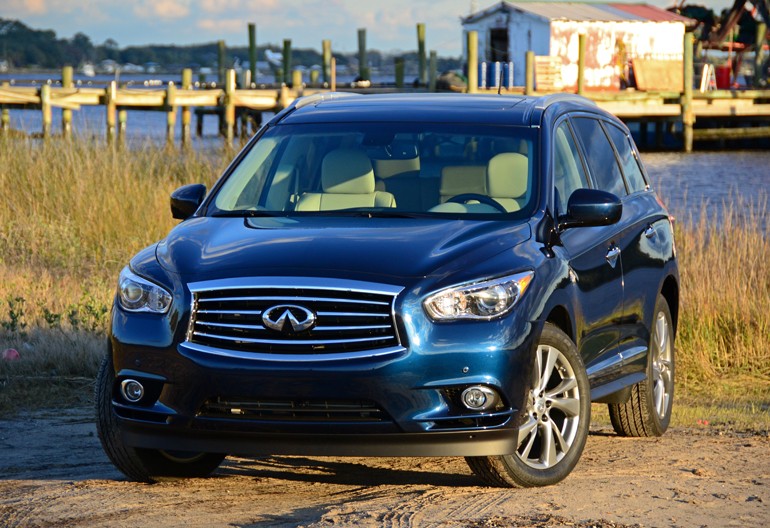 In Infiniti’s new vehicle naming structure they have found a new light in expanding the lineup but not forgetting the basis of their volume sellers – one being the 7-passenger crossover utility vehicle we now know as the QX60. Once known as the JX35, when it was first introduced as a 2013 model, the QX60 has received a few tweaks and polishing to keep the crossover theme wrapped up in a package featuring plentiful seating, cargo room, true luxury appeal, and a car-like driving characteristic. 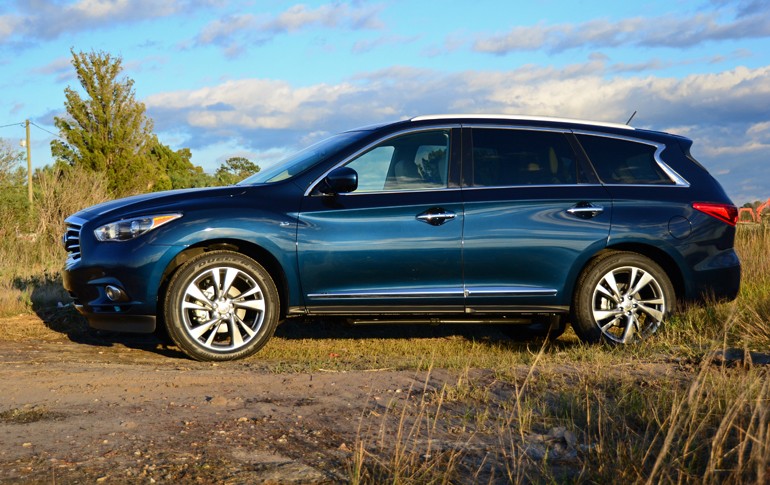 The 2015 Infiniti QX60 has been an innovation for the brand to offer seating comparable to its larger QX80 sibling only for smaller price and car-centric driving quality. Powering the new 2015 QX60 is the familiar 3.5-liter V6 engine with 265 horsepower and 248 lb-ft of torque. Somewhat similar to its 7-passenger Nissan Pathfinder cousin, the Infiniti QX60 builds off of what you would find in the Nissan with a few different mechanics in its advanced and recently updated CVT (Continuously Variable Transmission) that the widely popular V6 is mated to. 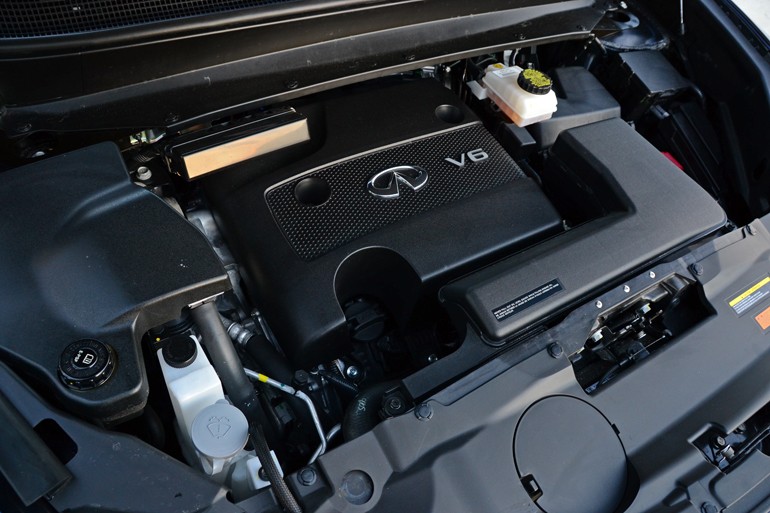 The latest iteration of the CVT transmission is a progressive movement to replace traditional automatics that are equipped on vehicles that do not require a high towing capacity. Though, the QX60 is able to tow up to 5,000 pounds. For the 2015 model year the Infiniti QX60 receives new programming for the CVT to act more like a traditional automatic by emulating shift points, which I found were most noticeable under medium to full throttle inputs. The CVT unit would eventually allow the beefy V6 to reach redline and then start stepping down in nearly 1,000 rpm increments. It all seems to work well. Though, my personal displeasure with CVTs finds fault in the constant droning sound of the engine at speed and its elastic power delivery feeling.

However, it is pertinent to mention that the QX60’s CVT has the best adaptive programming I have experienced yet in such a configuration. The system locks up the torque converter often emitting a direct feel at times for transmitting power to the front wheels and mustering out the EPA estimated 21 mpg city and 27 mpg highway. I found that reaching those figures was a nearly impossible feat. I walked way only getting 19 mpg city and 24.5 mpg highway with a combined figure of about 22 mpg, rather far from the EPA estimates. 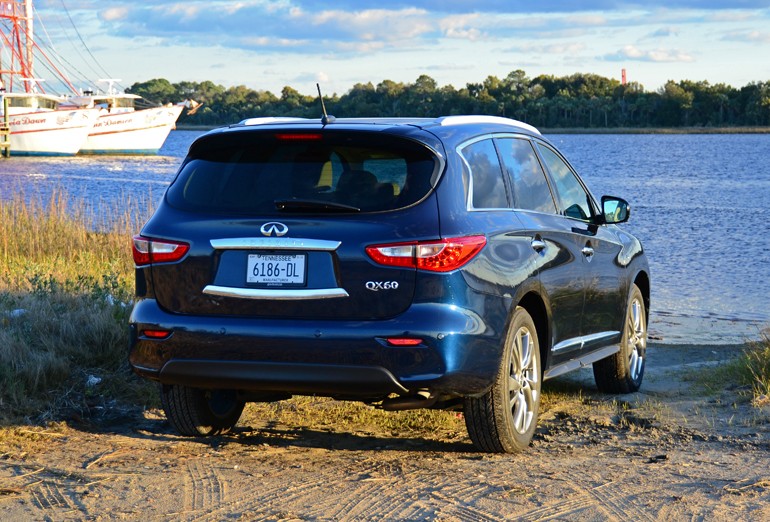 Overall performance of the Infiniti QX60 is “assuring.” That is the best word I can think of after just listening to the front wheels howl along a sharp bend exhibiting safe-but-discerning understeer. Steering feel is respectable up until you make relatively sharp turns or take exit ramps. The steering has a teeter totter point where it feels completely detatched and numb returning to center with a false weighted feel. You can think of it as a force-feedback steering wheel on a gaming system attempting to return the wheel to dead center. 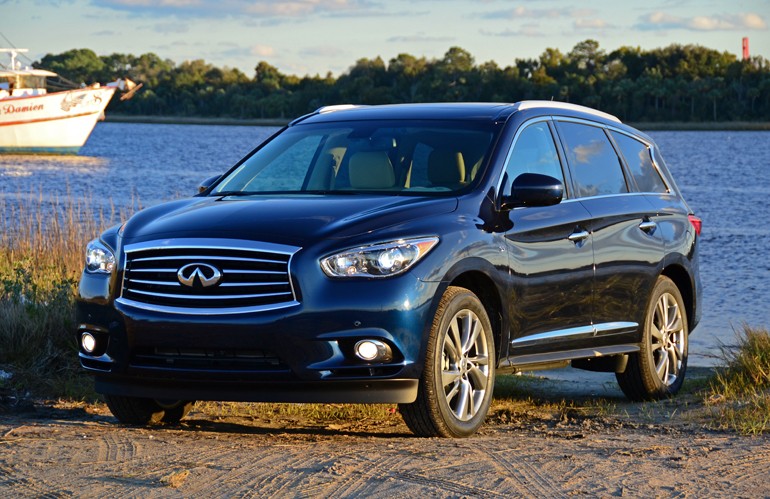 The QX60 seems nicely balanced for its size but leaves some forward momentum to be desired. Getting out of the hole from a dead stop seems to be the main challenge for the QX60 but once things are moving around 20 mph and above – all is good. Zero to 60 mph comes around at about 8 seconds, mostly due to how the CVT manages initial power and takes a good while to reach the V6 engine’s sweet power spot. Once the rpm needle reaches redline the QX60 feels rather peppy, but all bets are shattered after a few seconds have passed and the speedometer has yet to find 60 mph.

In all, the QX60 isn’t a slouch, and loading up 6 additional passengers in the comfortable cabin performance doesn’t seem to diminish much, which says a lot about how power is delivered. 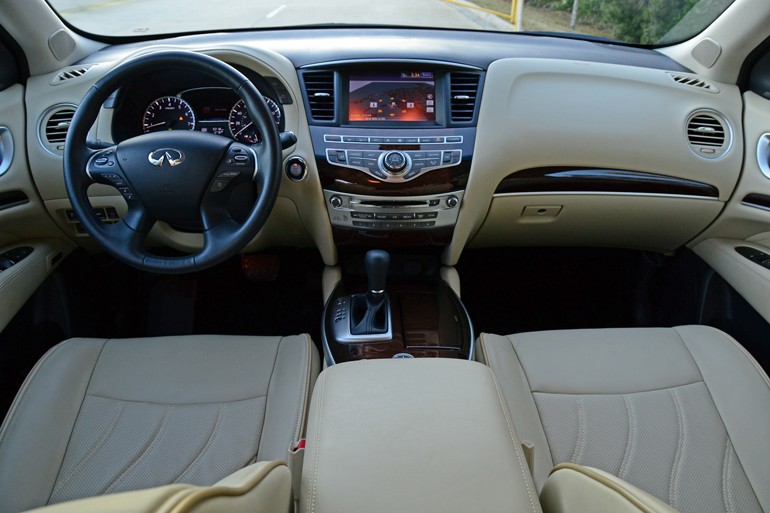 The interior of the 2015 QX60 carries over its luxury-laced appointments that exude Infiniti brand signification. The cabin of my 2015 QX60 test vehicle has many well thought out contrasts with attractive maple wood trim, several soft-touch plastics, stitched soft-touch panels and comfortable perforated leather seating areas. The seats, heated and ventilated front with heated middle row outboard seats, all fit the air of a plush luxury crossover cruiser. The versatile adjustability of the 2nd row seats adds to the comfort of your passengers giving everyone the necessary legroom and seat-back adjustments. 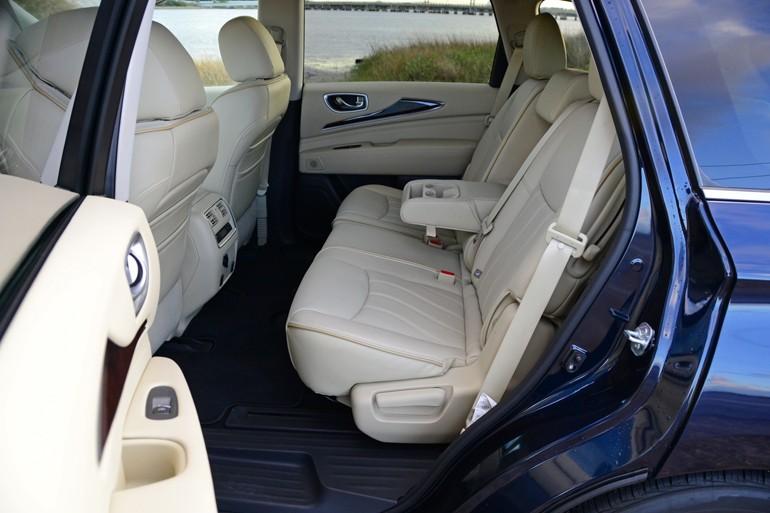 The third row seating has just enough space for two normal-sized adults but most of the legroom is completely reliant on the forward and aft adjustment of the second row seats. I found it was rather simple to get my 6-foot-3-inch frame into the 3rd row thanks to the second row having an intricate forward-folding and sliding feature, one that enables you to slightly fold and slide the second row with a child seat buckled in. Accessing the rear cargo area via the standard power tailgate is straightforward getting to the available 15.8 cubic feet of space with all seats in place. 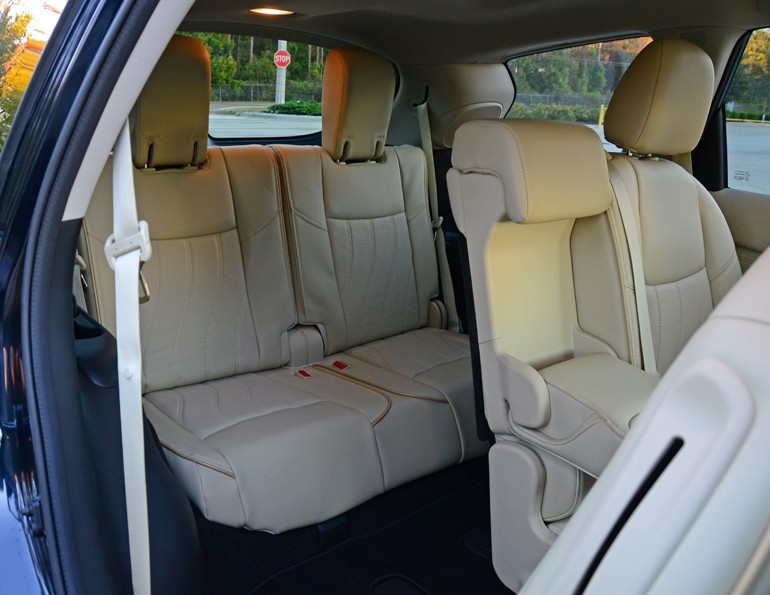 In a traditional sense, Infiniti continues to utilize advance tech packaged with safety at the forefront on vehicles like the new QX60. Setting itself apart from other crossover SUVs is its advanced technology grouping many active safety features that normally would not be available with its direct competition.

I unintentionally took advantage of the Backup Collision Intervention system where the system detected my garage door as I backed up and it suddenly slammed on brakes after getting too close. The same occurrence is expected to happen if you fail to utilize the 360-degree around view camera system, which is among the best in the business for virtualizing a live view around the vehicle when backing up or parking. 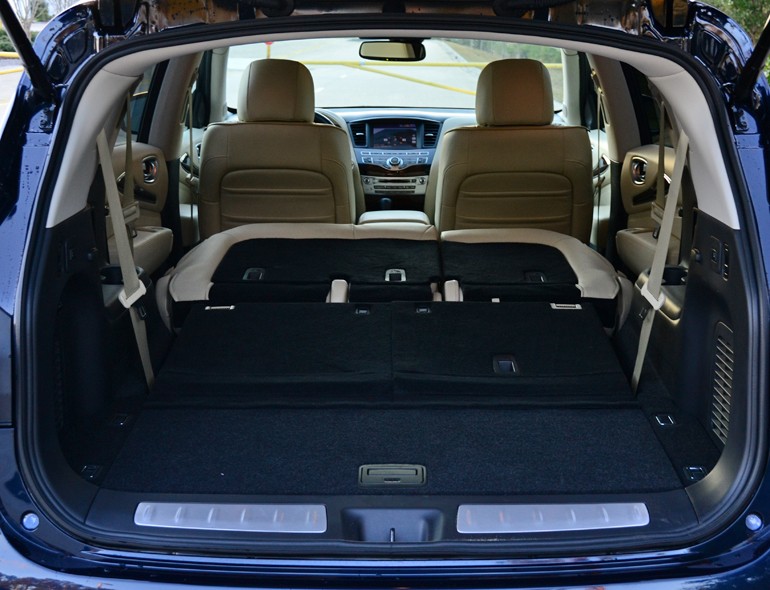 Other advanced tech features found on the Infiniti QX60 are bundled in option packages, such as the Technology Package including Intelligent Brake Assist with Forward Collision Warning, Blind Spot Warning & Intervention, Lane Departure Warning & Prevention, Intelligent Cruise Control w/ full speed range, Distance Control Assist, and Backup Collision Intervention. Enabling all of the active features via a steering wheel button, you will find yourself encased in a virtual cocoon that automatically brakes as objects or vehicles are detected in front and attempts to sway the vehicle back in its lane by braking the opposite side wheels as you approach painted road lines. The force-feedback gas pedal is another intricate part of the package group that gently pushes back on your foot as it approaches objects or vehicles ahead. The pedal also performs an added pressure act with subtle push-backs when the vehicle is placed in Eco mode, acting as an “eco pedal” to conserve fuel by tricking you in to slower acceleration actions. 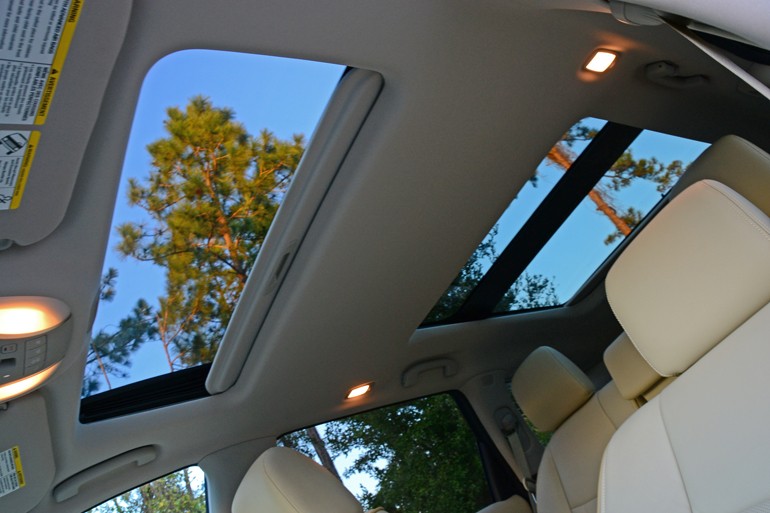 The take away from the 2015 Infiniti QX60 is it being the best luxury minivan, if there was such a thing. I say that not to diminish the well-thought-out design of a 7-passenger luxury crossover, but to signify its dominance for families who occasionally need extra seating yet never want to sacrifice prestige and a feature-packed luxurious cabin. In looking for such a thing in a 7-passenger SUV you usually have to spend more or go up market and settle on something exhibiting a larger body-on-frame design. With the Infiniti QX60 it isn’t so much of a compromise but rather a foray of having the best of all avenues in a luxury crossover that happens to provide a usable 3rd row of seating. To boot, the QX60 is as compliant as a midsized luxury sedan wrapped in a properly fitting package. It is worthy to note that there are only a couple direct competitors with a large cargo capacity and comparable feature sets. Otherwise, the QX60 is a strong standing proponent for the 7-passenger luxury crossover segment.

The new 2015 Infiniti QX60 starts at just $42,400 while my fully-loaded front-wheel-drive test vehicle tipped the price scale at $54,690, which still leaves some room for the intelligent all-wheel-drive option adding about $1,400 to the total price.