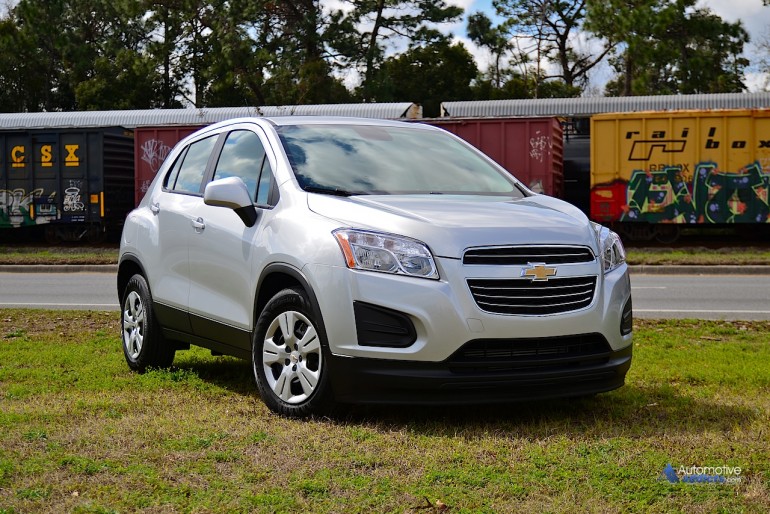 The SUV and crossover segment is growing by leaps and bounds forcing manufacturers to make calculated decisions to fill the increasing market for such vehicles. While the size of SUVs at one time was once growing to mammoth proportions, unforeseen circumstances put a halt to the growth of gas-guzzling vehicles ushering in a new season for small, compact crossovers. Filling this fairly new segment are vehicles like the Kia Soul, Nissan Juke, Mitsubishi Outlander, Buick Encore, and the all-new Chevrolet Trax, which I had the opportunity to check out for a few days. 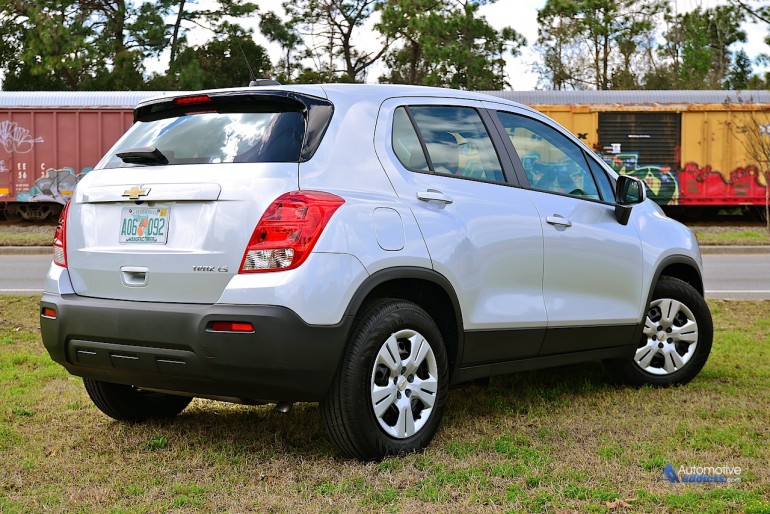 The new Chevrolet Trax embarks on a rare opportunity to own something that is low-cost without too much of a compromise thanks to today’s forward-thinking technology. The 2015 Chevy Trax brings us the Buick Encore’s platform, which has been a well-perceived vehicle for its size, car-like driving traits, and astounding equipment list. The Trax takes some of that formula to a new degree, one that pits a starting price of around $20,000, yet has a zippy 1.4-liter turbocharged 4-cylinder engine with 138 horsepower and 148 lb-ft of torque mated to a 6-speed automatic transmission. I can say, the turbocharged engine is eager to spin and the 6-speed automatic musters all it can letting the engine fly nearly to its 6,500 rpm redline between shifts. 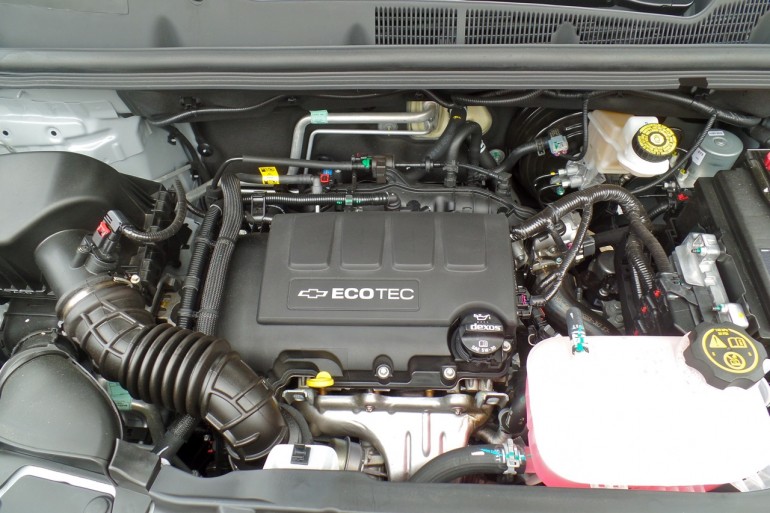 I would never dare to go as far as to claim the Chevy Trax being anything other than trusty transportation with a bit of a height disposition just to fit into the SUV or crossover utility vehicle category. I would, however, say that the Trax is more along the lines of a uniquely sculpted econo-box with a bit of self-indulging crossover character. That character starts and ends with its high-rising stature a short list of expected standard features for a modernized economy vehicle. 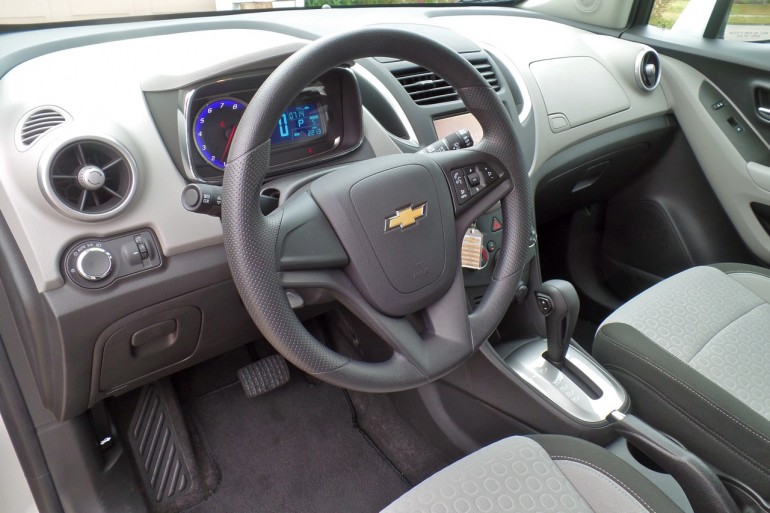 The new Trax may be somewhat of an acquired taste for its shortstop styling. It does nothing to appeal to enthusiasts yet pits a contemporary but vanilla feel from just about every surface. The driving nature of the Trax is numb at best. It muddles along consistently as to never give you any surprises assuring you of how it will handle keeping up interstate traffic or safely darting out in front of other vehicles on an exit ramp. The Trax can make it to 60 mph in 9.2 seconds, not the slowest thing around but you won’t want to end up in the same zip code of any tracks or drag strips, it could get ugly. Still, the 1.4-liter turbo-4 does its job to zip the Trax around with a smooth buzz – maybe an oxymoron there – just go with it. The driving nature of the Trax was surprisingly the best aspect of my LS trim model with zero options. Driving the Trax day to day seems to help you forget about its small proportioned exterior and unique exterior visual aspects. I’m trying to be nice here. My test vehicle has hubcaps, so you get my drift. 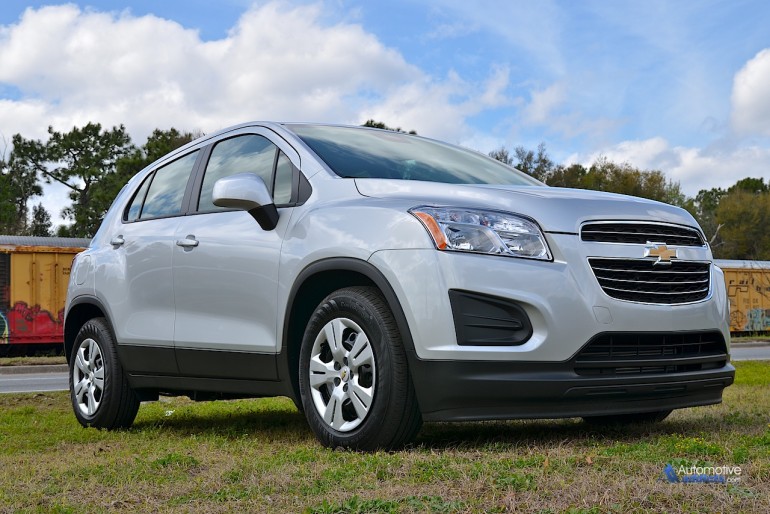 As a vehicle focused on youngsters, the Trax will do just fine. It has enough tech to keep such an age group well entertained, such as Bluetooth phone connectivity with Bluetooth audio streaming, a USB and Aux jack, and a WiFi hotspot. Just give teens and young adults the ability to link up their smartphone and connect to the internet, not much else matters to them these days. Not to mention, OnStar is still there to provide the expected telematics features to put less of a worry on the minds of discerning parents – or anyone for that matter.

It is prudent to mention that the Chevy Trax has a decently sized options list with several packages, including all-wheel-drive, Siri Eyes Free, and an assortment of visually pleasing add-ons – we are talking aluminum wheels and tinted privacy glass here– watch out now. 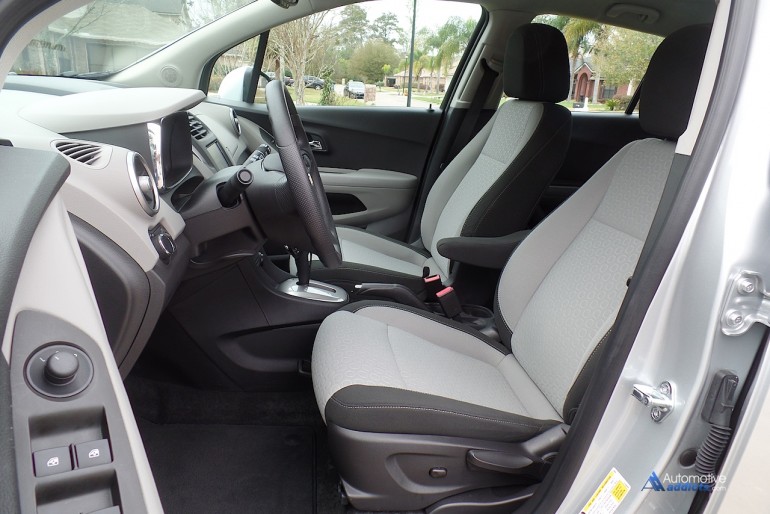 The interior hardly ever attempts to pull off any trickery. Though, most surfaces are comprised of hard plastics, molded as to play down your curiosity of tapping on them to see if they really are hard plastics. The seats prove to have a decent positioning up front. Headroom is plentiful, so there is that. Most of the controls are well placed as is the color LCD touch screen accessing the audio system and other vehicle connectivity controls and limited settings. For stowing items on the go, the Trax offers up to 48.4 cubic feet of cargo space when folding down the 60/40 split rear seat backs. 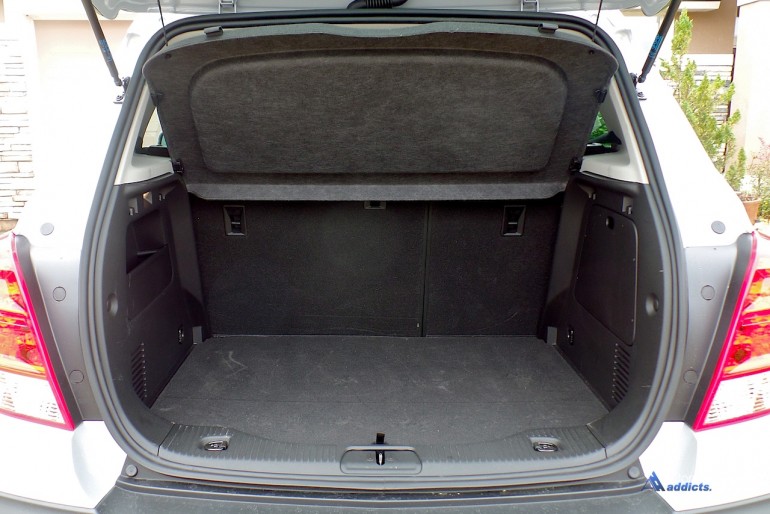 As the Buick Encore’s closely-related family member, the new Chevy Trax appeals to many looking to trim the price point without much of a comprise for the equipment that counts. At an as-tested price of $20,995, the base Trax LS is comparative a buy proving its economical attributes are a reality. Additionally, you will expect to save at the pump with an EPA-estimated 26 mpg city, 34 mpg highway and 29 mpg combined. Those figures were an easy match during my drive with the exception of the Trax rolling down the interstate at or above 70 mph – I saw an exponential drop off of fuel mileage coming out of it all at about 31 mpg at best. Reaching the legal speed of 75-80 mph on some interstates may peg the Trax to slurp up additional amounts of regular fuel. It’s not a pig, a skinny pig on a perpetual diet maybe. Don’t get me wrong, I totally get the Trax, though I wouldn’t recommend it to any of my close friends, maybe to someone who could care less about looks, horsepower, or luxury. That’s just not what the Trax is; it is more a no-frills consistent point A to point B transportation that permits splurging on some nice clothes to keep your life in balance.