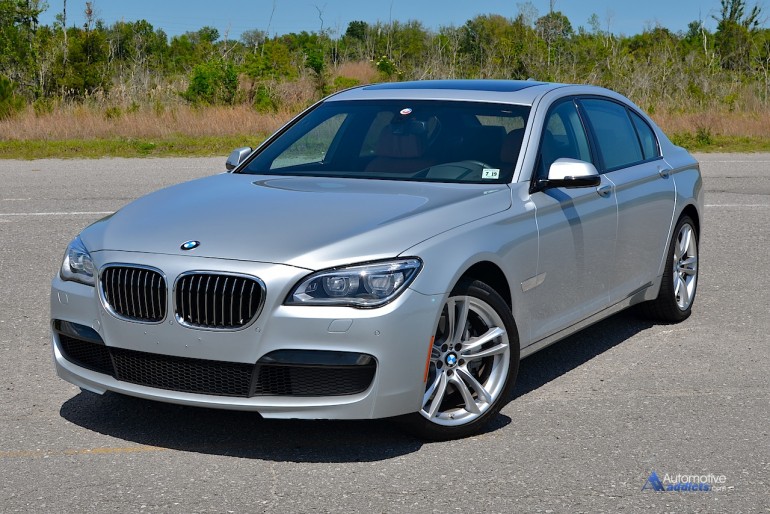 Sometimes, in life, it’s refreshing to try something out of the ordinary to discover you have been missing out. To that degree, I attribute diesel engines to being somewhat out of the ordinary but pose many good benefits. , which This week, I had the chance to experience in the 2015 BMW 740Ld with a 3.0-liter inline 6-cylinder turbo diesel engine. 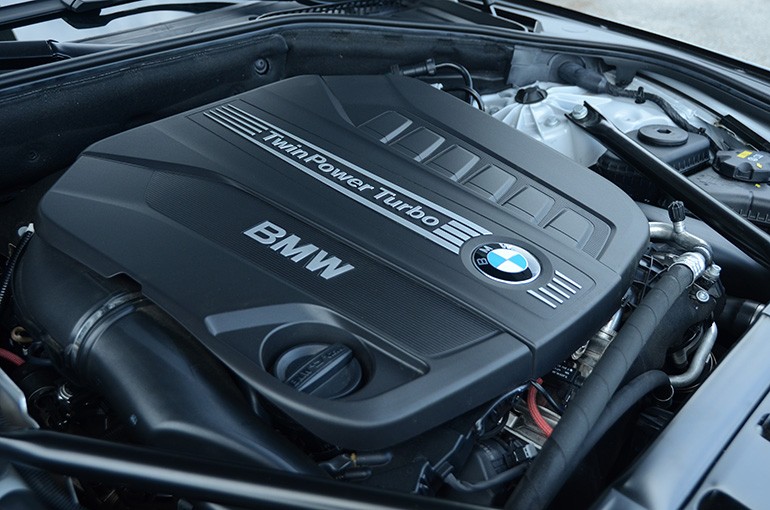 BMW’s long praised 7 Series has marched on with the latest model receiving a refreshing as a 2013 model. Carrying that traditional signification of a highly admired full size luxury vehicle, the 7 Series gets diesel engine option for 2015 bringing ample torque and unmatched fuel economy to the table here in the states. 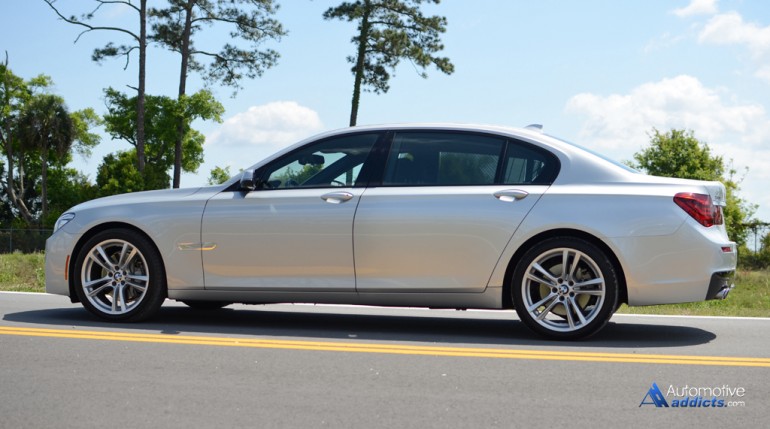 The new 2015 BMW 740Ld xDrive combines the benefits of diesel packing in 255 horsepower at 4,000 rpm and an amazing 413 lb-ft of torque from just 1,500 rpm. Moreover, the inline-6-cylinder turbo diesel in my 740Ld xDrive proved to be among the most efficient offering for the long-wheelbase 7 Series, sometimes achieving nearly 42 mpg on long 45 mph back roads. Eventually, my travels averaged out to about 32 mpg traveling at interstate speeds and 27.5 mpg around town with the standard Start-Stop tech grumbling its savvy conservative efforts. In all, the EPA estimated 23-mpg city and 31-mpg highway figures were easily attainable. 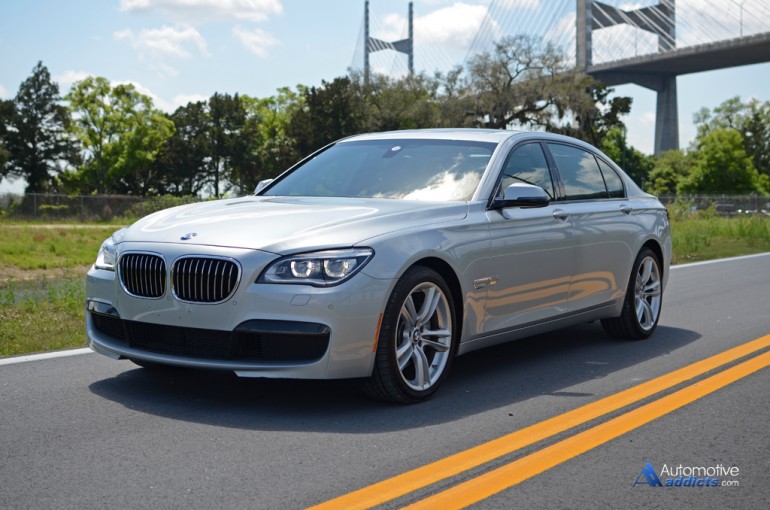 Adding to the efficiency, the Stop-Stop system did well to keep all accessory equipment humming while the flow of diesel is shut down momentarily. Additionally, the system was smart enough to avoid annoying start-stops in abundantly heavy stop-and-go traffic. The turbo diesel engine did its job to remain relatively quiet, vibration-free and proved quite the performer. The thrusting torque from the engine gave way to the 740Ld feeling lively at low speeds and out of the hole. However, up high – getting to interstate speeds and full-throttle stretches up to nearly 70 mph, the 740Ld gave way to somewhat of a short breath with the 255 horsepower feeling underwhelming comparing it directly to the 740i’s dual-scroll-turbo gasoline-burning 6-cylinder. Nevertheless, the 740Ld xDrive never felt like it was slow, the high torque output more than made up for the heft of the 7 series. Zero to 60 mph comes in a respectable 6.1 seconds. 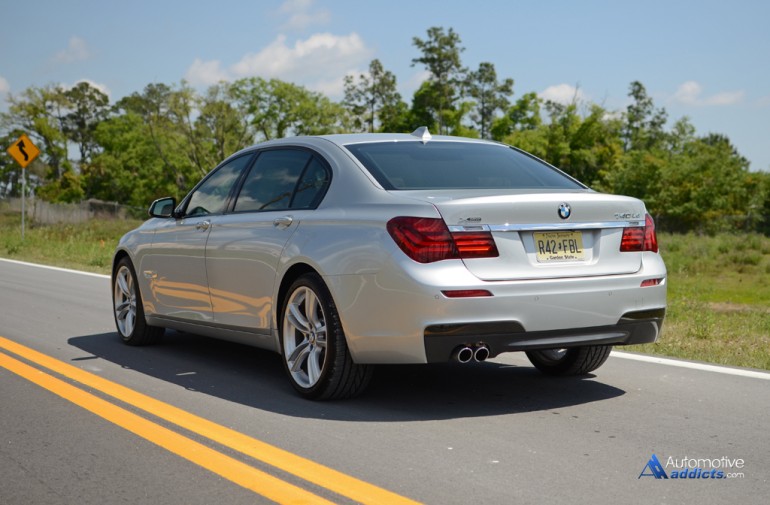 Available only in the long wheelbase xDrive all-wheel-drive trim, the 7 series diesel with its 740Ld xDrive nomenclature pits itself as not much of a difference from other 7 series offerings. Power is sent through the advanced xDrive all-wheel-drive system assuring the 7 series’ footing even in wet inclimate conditions. The ZF-sourced 8 speed automatic transmission does its duty with advanced programming to map gear changes tailored to the short powerband of the diesel engine. Shifts take place in short time allotments as to prevent the 3.0-liter diesel from giving out of its thrusting sweet spot, which starts to ebb out around 4,800 rpm or so – if you ever let it spin that high while in the transmission’s manual mode. Certainly not the high-revver here – think of it as the smoothest diesel truck ever – if there is such a thing. Long gone is the diesel clatter. There is only an aggressive growl at full throttle followed by your head placed in to the supple adjustable headrests. 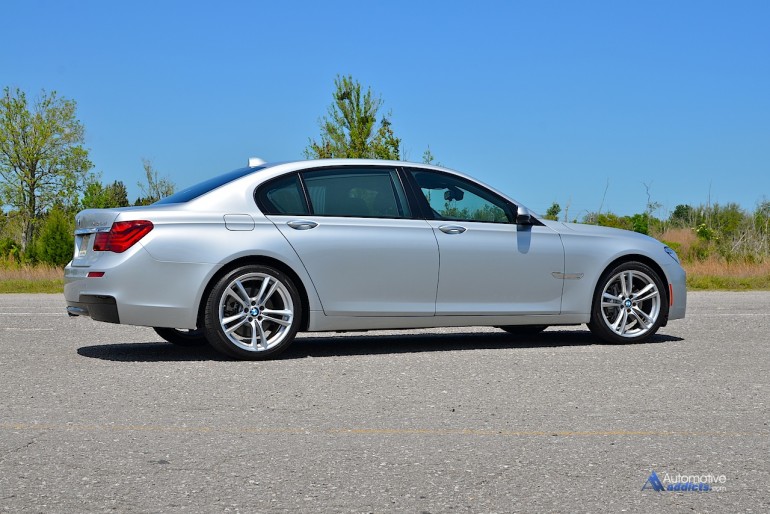 Speaking of smooth, the plush ride quality of BMW’s 7 series is the forte of the German road hog. It is such because it eats up bumps like turkey at a thanksgiving feast. Not only does the longer 126.4 inch wheelbase aid to the luxurious ride of the BMW 740Ld, but its automatically height-adjustable suspension with adaptive dampers all play in synch to keep the nearly limo-proportioned body stable and well dampened. 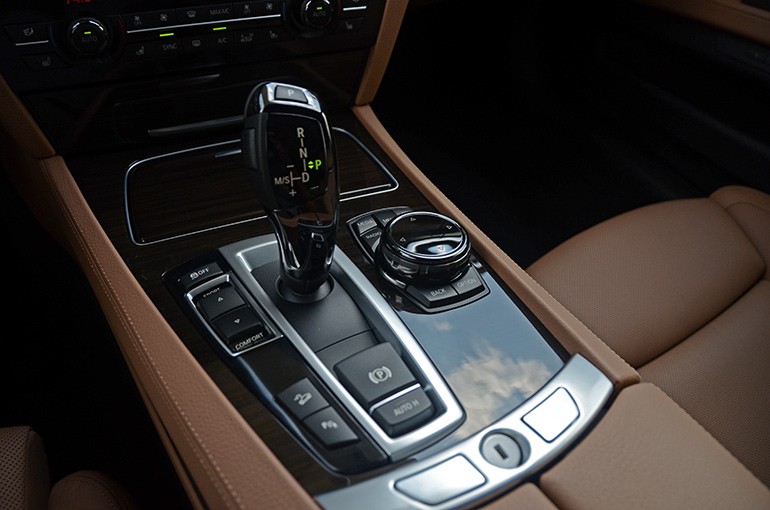 The adaptive drive system with settings for Comfort plus, Comfort (normal default setting), Sport and Sport plus, all have their ornate setting for the suspension dampers, steering effort, throttle response and shift patterns. BMW has done their homework in this aspect as the 740Ld, when pushed near its limits, reacts to handle itself surprisingly well for its massive size.

Pushing the envelope further is my test vehicle’s optional M Sport Package that adds larger double-spoke 20-inch alloy wheels for even better stability without sacrifice of the much ride quality. As part of the M Sport Package my 740Ld sports-up its looks with an exclusive aerodynamic kit changing the lower front and rear bumpers and adding an eye-pleasing aesthetic down the long skirts of the elongated soft-close automatic aluminum doors. 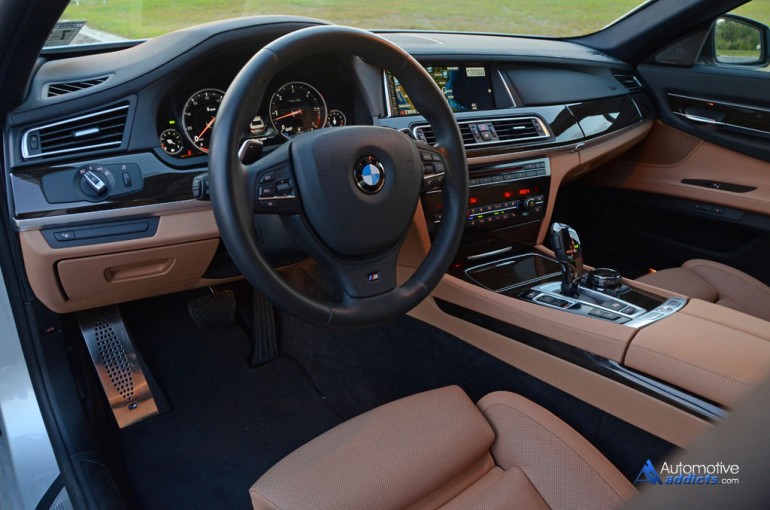 Interior accommodations of the 740Ld convey plushness with soft touches all around with the exception of the dark wood trim accented by aluminum and my test vehicle’s M Package multi-contour perforated seats shod in light saddle Dakota Leather. The luxury theme is alive and thriving in the supple interior of the 740Ld, as it is expected for BMW’s 7 Series. The beefy leather heated steering wheel fits like a glove while the optional ceramic controls for the iDrive system, gear shifter, climate control temp knobs, and volume knob cap off the luxury apathy set in motion for BMW’s prided luxury liner on four wheels. 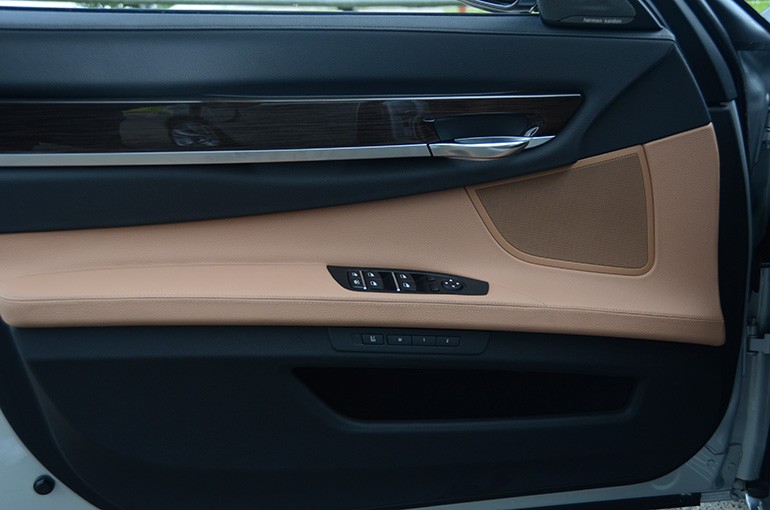 A slight misstep for the interior is found in the obscure positioning of the inside door pull-handles. Quite frankly, they are visually hidden behind the wood trim molded to the inside wood trim surrounding the door latch. I know, it is somewhat of a trivial criticism, however, before becoming accustomed to the location of the door handles most will either grab the door trim’s storage pocket or door latch itself to close the doors. I will admit, it took me a couple days to actively remember where to grab the door to close it. 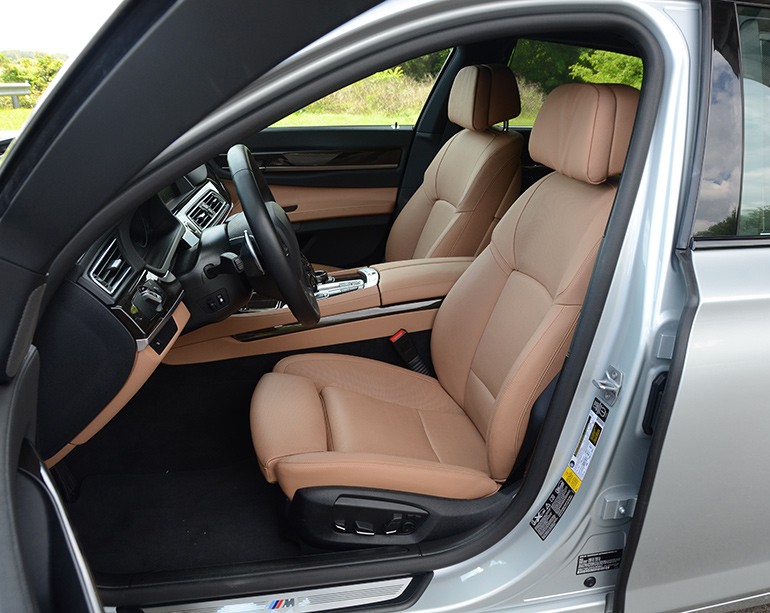 In terms of proportions of space and room to indulge in the lap of luxury, the 740Ld doesn’t skimp. Comfortable seating positions are easily found in what seems to be infinitely-adjustable front seats with 16-way adjustments, 4-zone climate control, and enough leg room out back that Shaquille O’Neal could comfortably film his next icy-hot commercial. The only concern may be that the 740Ld’s equipment list is shorter than its Mercedes-Benz S Class competition, quite a stiff competitor for BMW nonetheless. Still, the there is something to be said about the BMW 740Ld’s road prowess and balanced chassis on the road. This Bavarian limo doesn’t back down when its pushed hard on some twisty back roads. You can think of it as one of the most agile oil-burning limos money can buy – and that isn’t a bad thing. 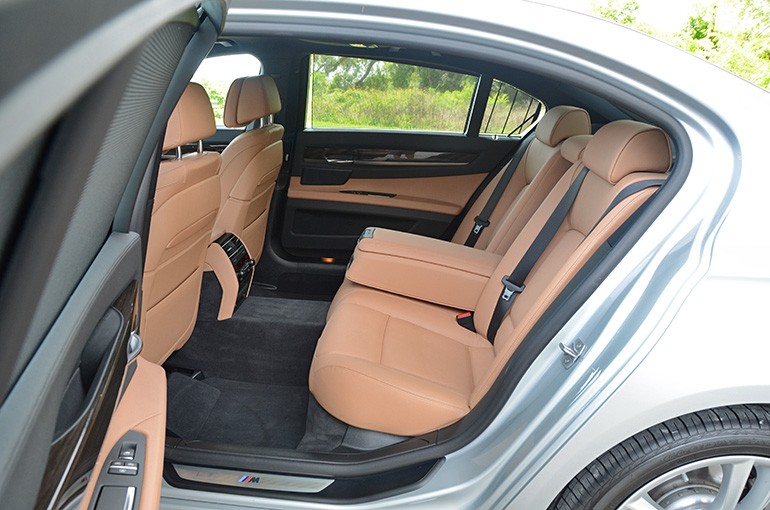 At the as-tested price of $95,850 (base price of $82,500), my 2015 BMW 740Ld exhibits somewhat of an acquired taste in the performance of its Diesel engine Though, it pits exceptional efficiency chalk full of torque but short on stretching its horsepower legs after things get moving. In a world filled with eco-centric minds, thanks to information literally traveling at the speed of light, the BMW 740Ld easily finds its niche and following for its plush luxury appointments while being among the among the most efficient offerings in the coveted full-size luxury class that it falls into.

There aren’t many performance-minded luxury vehicles that offer a 700-plus mile range yet still permit over 43-inches of legroom out back and nearly 42 inches up front. Sign us up for this ride, again and again.