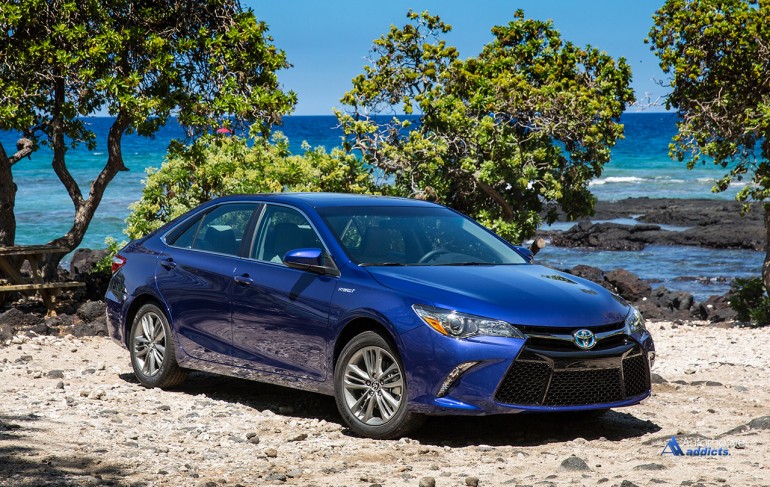 Everyone has to make choices in life, both difficult and easy. When it comes to automobiles some choose to stay with the safer bet in a vehicle that has a knowingly proven track record. Toyota has been a consistent force that proves to build reliable appliances for the road that happen to provide transportation from one point to the other while doing everything in between without complaint. This can be said about the redesigned 2015 Toyota Camry, America’s number-one seller, which I spent some time with in the SE Hybrid trim over the past week. 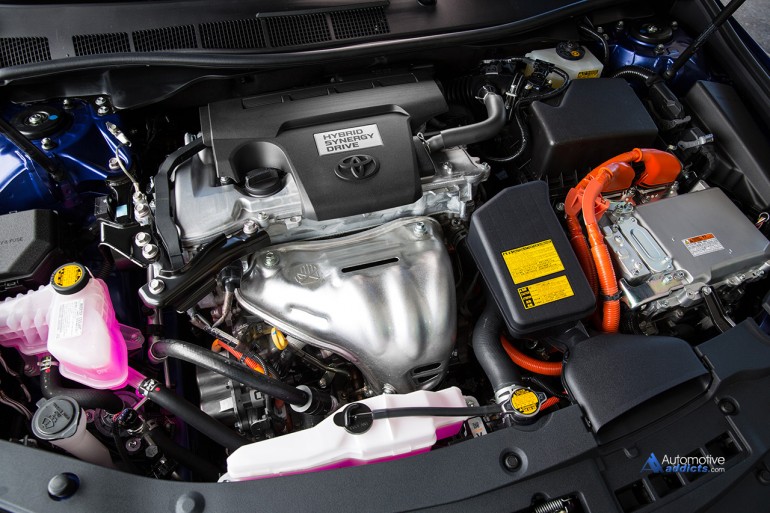 The new 2015 Toyota Camry Hybrid keeps on pace with its carried over hybrid synergy drive powertrain. Use of the 2.5-liter 4-cylinder Atkinson cycle engine and electric motor combination has made the Camry hybrid an attractive offering for the midsized sedan segment for many years and continues to do so with a bolder design inside and out.

Getting an EPA estimated 40 mpg city, 38 mpg highway and 40 mpg combined, the 2015 Toyota Camry Hybrid doesn’t quite reach its Prius sibling’s larger mpg numbers (51 mpg city/48 mpg highway). However, the new Camry hybrid trades a few mpg for its decent performance, nearly seamless transitioning power to the front wheels, and a look that blends in with the rest of the Camry’s new bold proportions and available creature comforts. 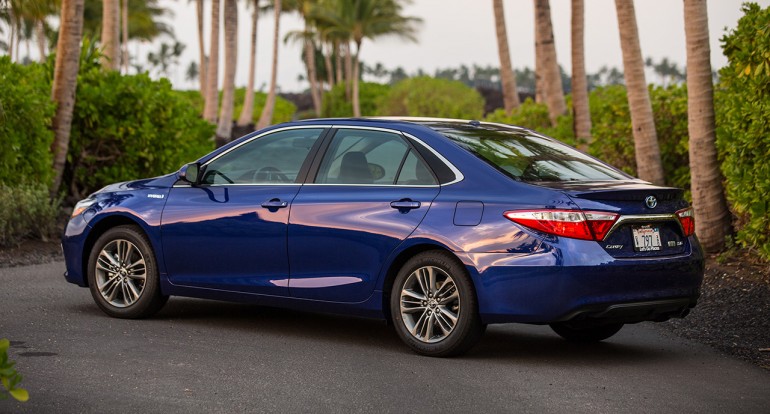 Making due with the welcomed changes for the redesigned 2015 model year, the Camry Hybrid is now available in a sporty SE flavor. Putting it through the paces, I saw a steady 37 mpg on the highway while keeping up with the high-pacing flow of traffic on my 300-mile journey down Florida’s portion of Interstate 95. Not very impressive but consistent. The Camry SE Hybrid is apt to getting better mpg in the city taking advantage of the synergy drive system where I saw nearly 42 mpg on average. Additionally, you can expect to get better mpg figures from the Camry LE Hybrid trim level (43 mpg city / 39 mpg highway) with different aerodynamics. The total power output of about 200 horsepower from the gas engine and nearly 199 lb-ft of instant torque coming from the electric motor (156 lb-ft torque from the gas engine) work in harmony through a CVT (Continuously Variable Transmission). The hybrid drive system is nearly seamless in its transition from electric motor to gas engine. Through the use of both battery and gas power the 3,500 pound Camry scoots to 60 mph in 7.5 seconds. 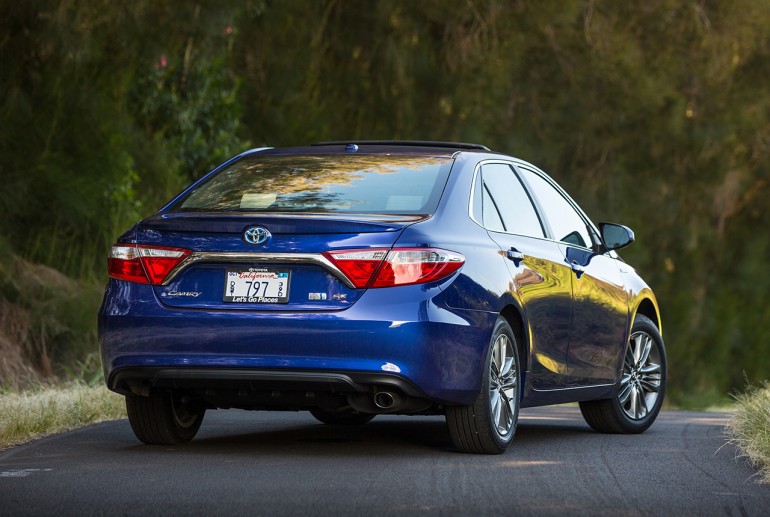 Hardly ever is the Camry Hybrid SE taxed to the point of not having enough pick up to keep pace with the flow of traffic, something Prius drivers may have a slight qualm about.

The control unit for the engine and transmission are quick to adapt to just about any situation to never leave you guessing if the gas engine is going to turn over to add the necessary pulling power to get out of the way. The regenerative braking, making the brake pedal somewhat touchy at the middle of its travel, does take some getting use to. Still, the 2015 Camry Hybrid shines brightly as one of the best hybrid vehicles on the road, making all of the quick-reacting functions of its complex system a thoughtless action from the driver. You just get in and drive it like you would any other vehicle and it will gladly behave just like a top-selling midsized sedan would expect – getting excellent fuel economy.

The 2015 Toyota Camry SE Hybrid doesn’t shy away from its quality roots and the new design makes the total package even more attractive. With the sporty darkened grill up front, the graphite-finished 17-inch wheels wrapped in low rolling resistant tires, all make the Camry SE Hybrid the perfect alternative to those who want something more fitting in the eyes of the critiquing public and light hearted enthusiasts who despises 11-seconds-to-60-mph hybrid vehicles. In a way, the new Camry SE Hybrid is the Prius, in a faster and larger sized package that light hearted enthusiasts always wanted in mid-sized hybrid sedan – they just don’t want to outwardly admit it. 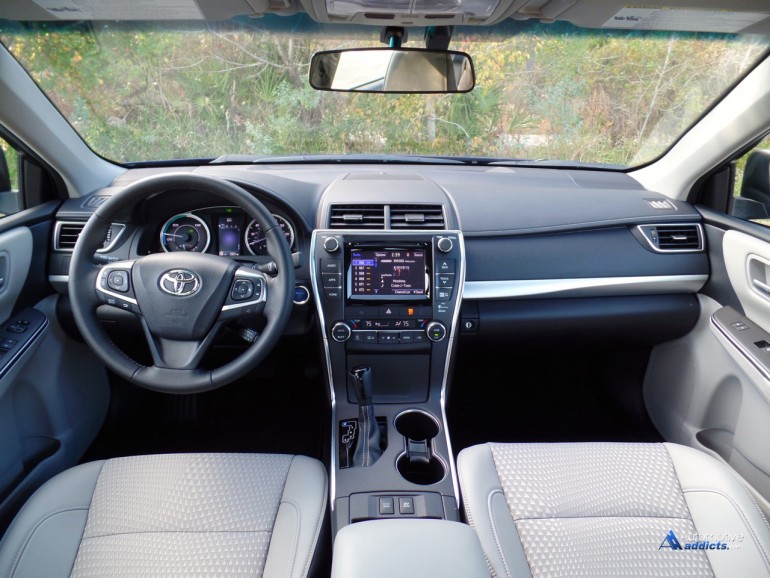 The SE trim for the Camry Hybrid adds a bit of visual sport and a sportier handling trait over the LE and XLE trims. In this, the ride still remains soft for my taste, though slightly retuned for the SE trim, still reserving much communication from the road. The new Camry SE Hybrid is a desirable choice for anyone who wants to mix a dash of sport to the run-of-the-mill midsized hybrid sedan formula. I totally get it. 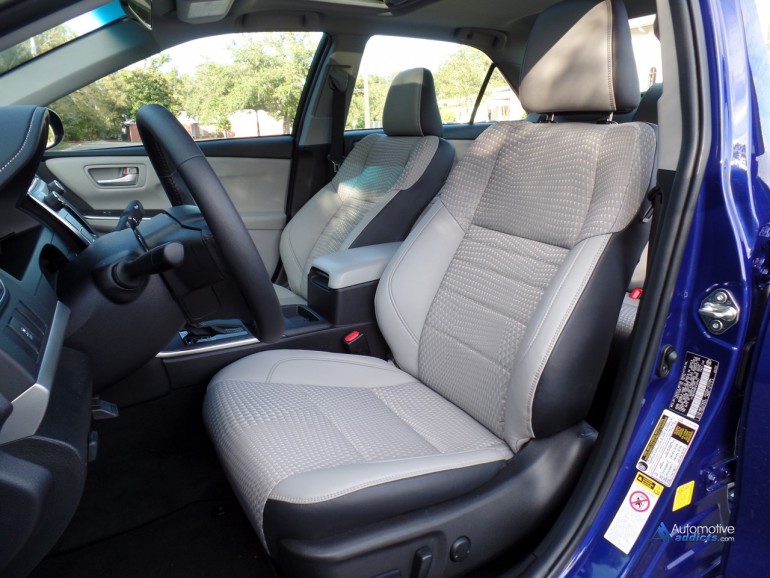 Getting to the bottom line, the 2015 Toyota Camry SE Hybrid keeps its desirability when it comes to its price, starting at just $27,995 and tallying up to an as-tested $32,492 including a $825 delivery, processing and handling charge. For the as-tested price, you will get the added options of the Engine Premium Audio with Navigation package (GPS navigation with voice recognition, 7-inch high resolution touch screen, 6-speaker audio system w/mp3/wma playback, USB 2.0 port, Bluetooth phone and audio streaming connectivity, Entune App Suite, HD Radio, HD Predictive Traffic and Weather, AM/FM Cache Radio, and SiriusXM All Access Radio), Power tilt/slide moonroof, wireless phone charging, VIP Plus security system, illuminated door sills and remote start. 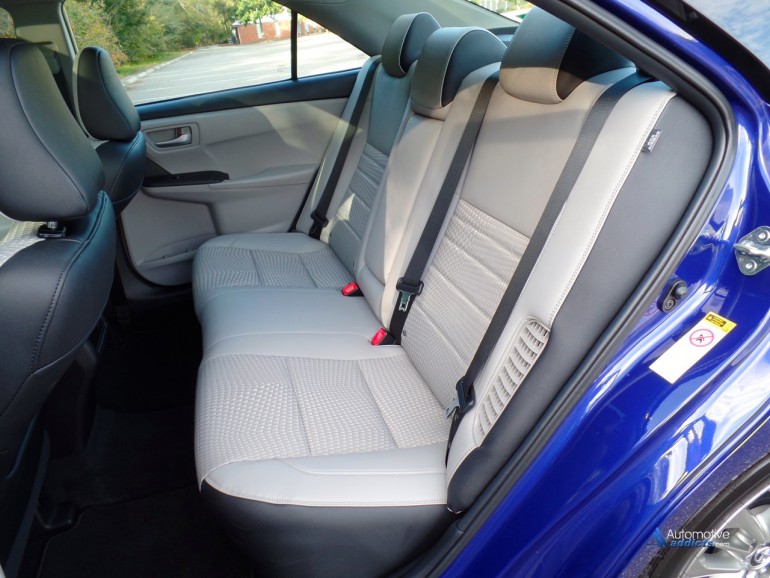 Having experienced the all-new 2015 Toyota Camry in all of its available flavors during an extensive drive previously, I can undoubtedly say it is the best yet and should have no issues retaining its number-one in sales crown. It does everything as advertised without any protest while exuding a high level of quality, fit and finish, and a wide array of new safety and connectivity technology that is easy to use. 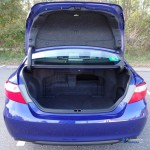