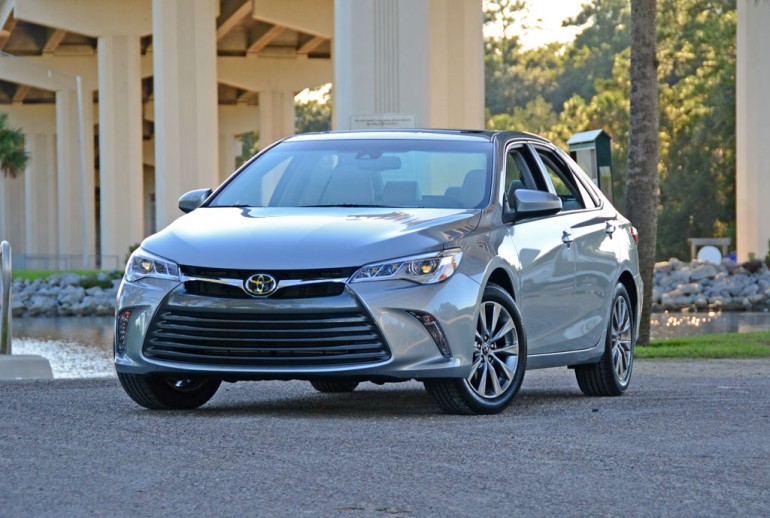 I can remember a time when I considered buying a Toyota Camry. I am not sure what was going through my mind at the time, about to tie the knot and set sail on a new life. Maybe it was the pressure of starting a family, or maybe I didn’t want the hassle of settling on a vehicle I wasn’t too sure would last me many years into the none-single life. Either way, the Toyota Camry was a fall-back, a no brainer in my situation, that I could bank on being a constant in my new relationship.

I knew, without a doubt, that the Toyota Camry was something almost everyone has experienced, even if you don’t own one, and just about everyone knows someone who does. Despite my early-on appetite for the Camry, I instead brought home a Toyota Celica GTS 6-speed.

That went over well.

The all-new 2015 Toyota Camry embarks on Toyota’s methodical journey to take a formula that has endowed itself in relentless quality and recognition in America as THE BEST SELLER. Today, the journey continues with a Camry that has been tweaked in many aspects to meet the desires and chants coming directly from consumers. Toyota has listened, and listened well, taking the Camry to a new height with an all-new outwardly appearance. The interior is restyled, as is the sheet metal, for a sleeker appeal that is almost bold in some aspects when you examine the look of the newly-introduced XSE sports trim. 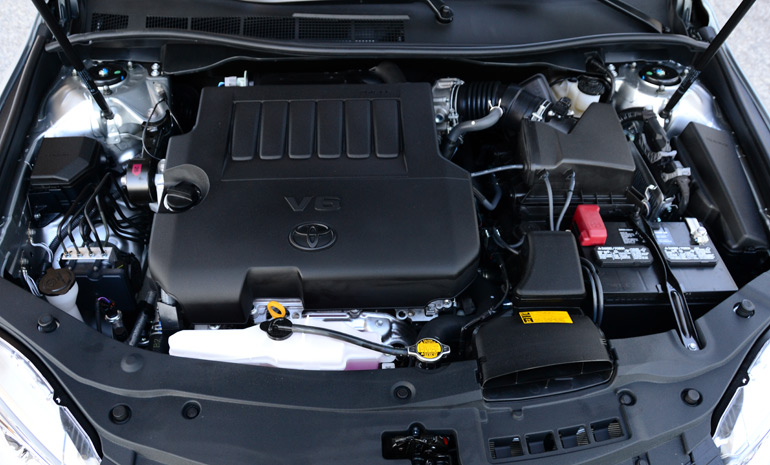 For 2015, the Toyota Camry carries over its powertrains, something that has proven to be a solid and reliable workforce for the 4-cylinder, V6 and Hybrid models. In this aspect, instead of conjuring up additional efficiency in an unfamiliar powertrain, the Camry makes due with its offerings that continue to satisfy in many facets. Both the 4-cylinder engine and V6 continue to use Toyota’s proven 6-speed automatic transmission. The Hybrid carries on with its smooth and quick-responding ECVT (Continuously Variable Transmission) unit. Fuel consumption figures retain their values from the outgoing years with the 4-cylinder models getting 25 mpg city, 35 highway and 28 mpg combined. The V6 Camry gets 21 mpg city, 31 highway and 25 mpg combined. The fuel-sipping Hybrid steps in a new direction with two different mpg figure sets dependent on the trim level, giving the SE and XLE Hybrids 40 mpg city, 38 mpg highway and 40 mpg combined. The LE Hybrid gets 43 mpg city, 39 mpg highway and 41 mpg combined. 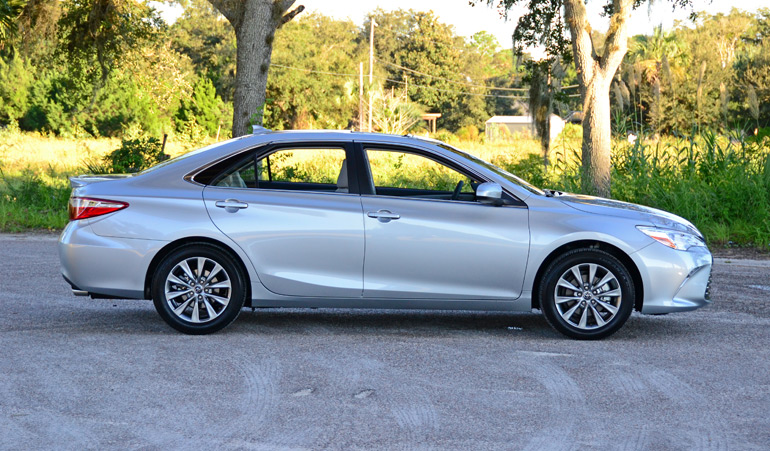 With the powertrains and roof structure remaining the only carryover ‘parts’, the all-new 2015 Toyota Camry is improved in all other areas, making way for a more ridged, refined and bold approach to America’s best selling car. To put things into perspective on the major force that the Camry represents in America, if the Camry were its own brand it would be one of the 10 largest in the automotive industry. With that respect, Toyota took on the seriously meticulous task of redesigning an American staple in the automotive world. Quite the important task as to not mess up a good thing. 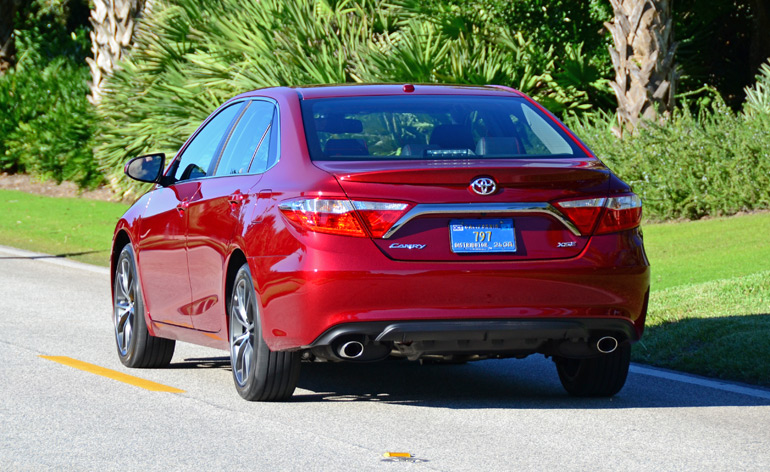 The all-new 2015 Toyota Camry lineup features the same returning trim levels with the addition of a new XSE trim. The Camry starts with the base LE then moving to the SE, XSE, and XLE. The LE, SE and XLE can all be had as a Hybrid, giving consumers the benefit of a sporty Hybrid in the SE trim, featuring the Camry’s sport-tuned suspension ultimately changing the over-all driving dynamics. I was able to experience the differences in each trim in Toyota’s invitation to Ponte Vedra Beach, FL to experience the all-new 2015 Toyota Camry. The location was a change of pace, as it only required me to drive about 30 minutes from my home to check out Toyota’s steady hand of American automotive ingenuity – a vehicle that is about 75% derived here in America. 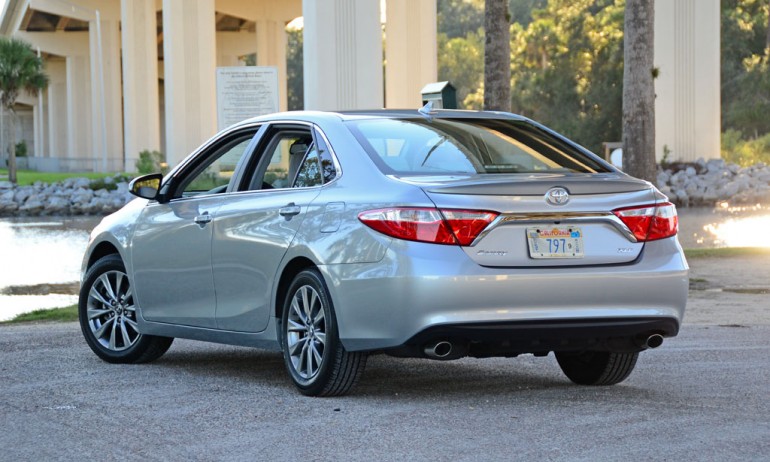 Setting out on a journey to experience the all-new 2015 Camry, the initial takeaway was it felt familiar but better. Actually, better in just about every aspect with the exception of its power delivery. The interior of the new Camry has taken on a new shape, literally, in many portions where the appeal is more upscale and gone are the dreadful faux stitching and un-agreeable plastics – all left with the last generation. The interior makes clever use of its plastics while there are several areas that have infused materials to emulate a luxurious feel. The infotainment system, upgraded to feature the latest Entune app suite and connectivity integration (Bluetooth, USB, Aux) all fall in line for a mostly user-friendly interface. 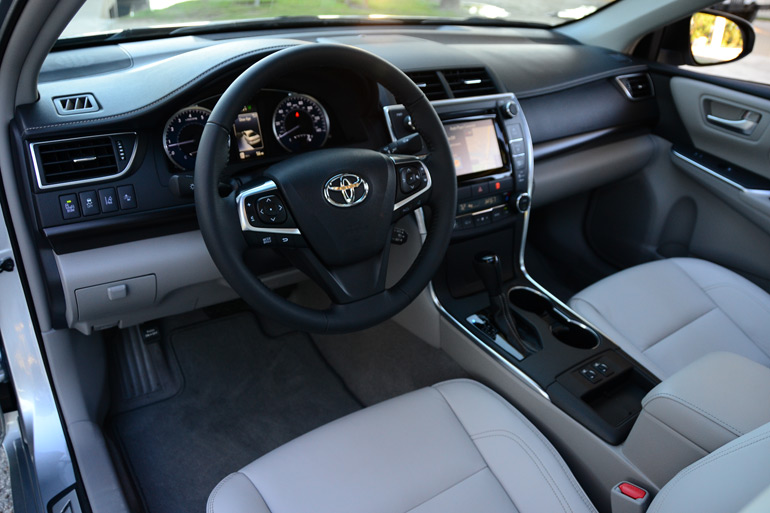 Seating positions are optimally placed for better appointments of passengers and the driver. With my 6-foot 3-inch frame, I felt right at home in the new Camry. The initial soft approach of the 4-cylinder XLE trim was agreeable while jumping into the XSE V6 proved to be a nice attraction for mild-hearted enthusiasts. Yes, it was just that fun dashing to 60 mph in just 6.2 seconds. Following up with the SE Hybrid, the fuel-miser kept on a nice pace through many roads and highways I have traveled often. The new Camry Hybrid is never a slouch does a magical job of mixing in a bit of sport and hybrid economy, something rarely seen meshed together so well. 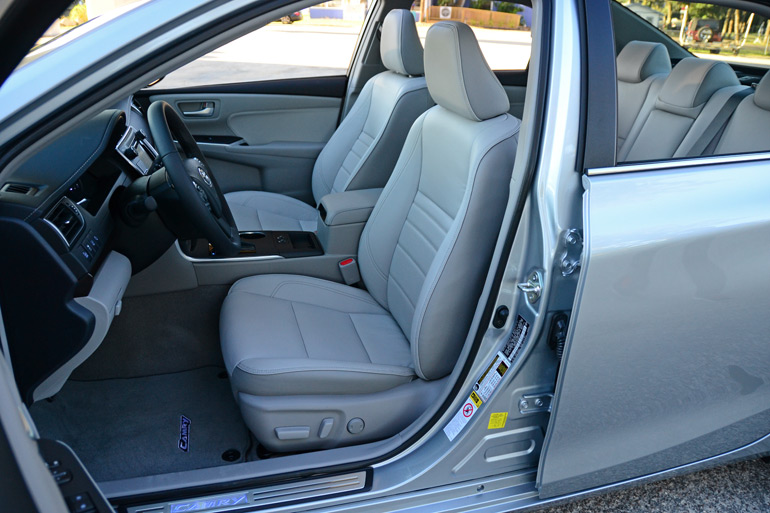 At the highlight of the new 2015 Camry’s tech is the availability of LED headlights (LED daytime running lights standard on XSE, XLE trims) in all trims except hybrid models, and as part of an available technology package you get lane departure alert, pre-collision system, adaptive cruise control and automatic high beams. The available Entune Premium JBL audio system comes as part of a package including GPS Navigation and App Suite. Moreover, a wireless cell phone charging station is available for charging up Qi-compatible phones. Having an iPhone I was a bit curious about the feature, but on my trip Toyota cleverly provided the proper iPhone accessory – much like an iPhone case – to wirelessly charge iPhones. Smart! 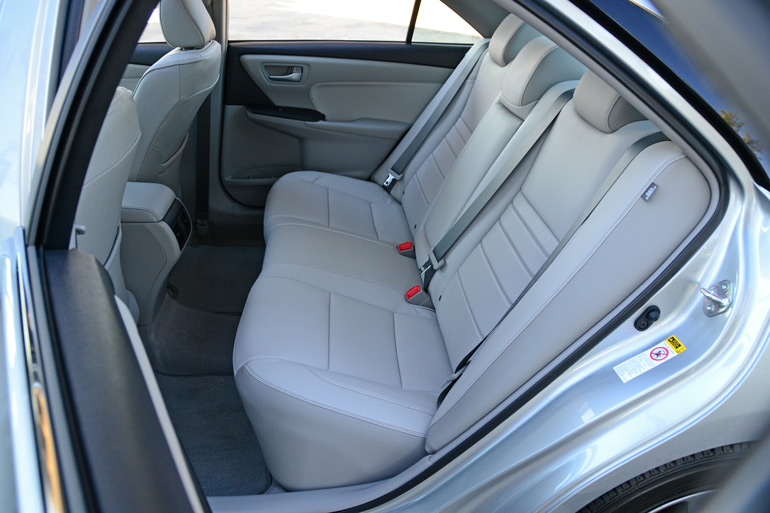 On the outside the all-new 2015 Toyota Camry gets two main styling choices where the LE and XLE in either 4-cylinder, Hybrid or V6 drivetrains, have a front fascia that has softer lines mostly found in the grill, almost mimicking its larger Avalon sibling. Moving to the sport trims, SE and XSE, the front grill and bumper have an aggressive glossy black grill, virtually eliminating the chance of mistaking the sport editions for anything but a bold-looking Camry. 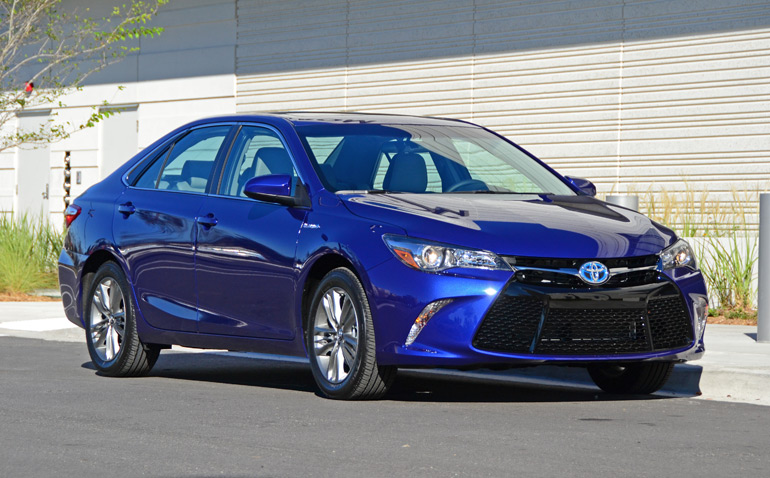 Toyota’s long proven record is enough for most folks to take home a new Camry while there are those that ask for something more than a reliable transportation appliance. I can say with a certainty, after checking out the all-new 2015 Toyota Camry for a couple of days, it will surely grab the attention of a wider demographic, and that includes a younger audience without taking away from the traditionalists that will always see what Toyota is up to on the next Camry. With a compliant and smooth ride, several trims to choose from including a sporty and powerful midsize sedan on one end and an economical 43-mpg marvel on the other, the 2015 Toyota Camry is the best yet. 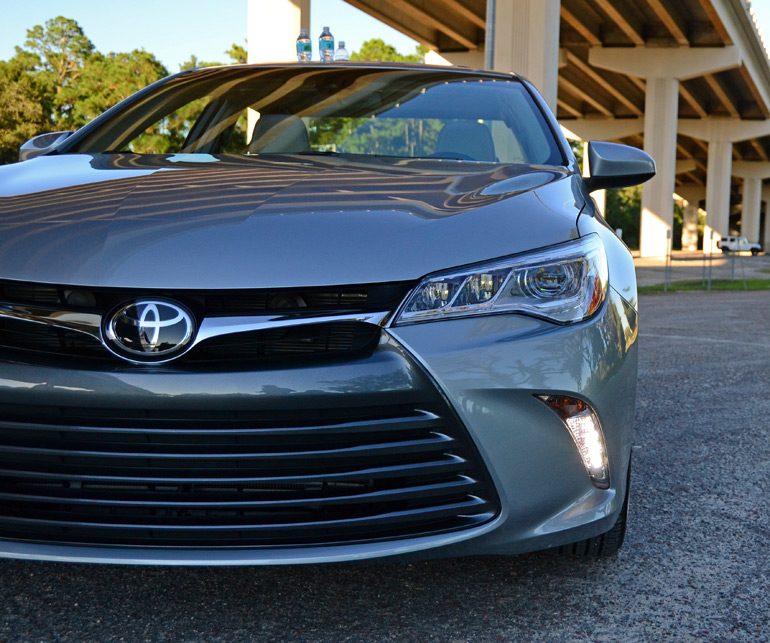 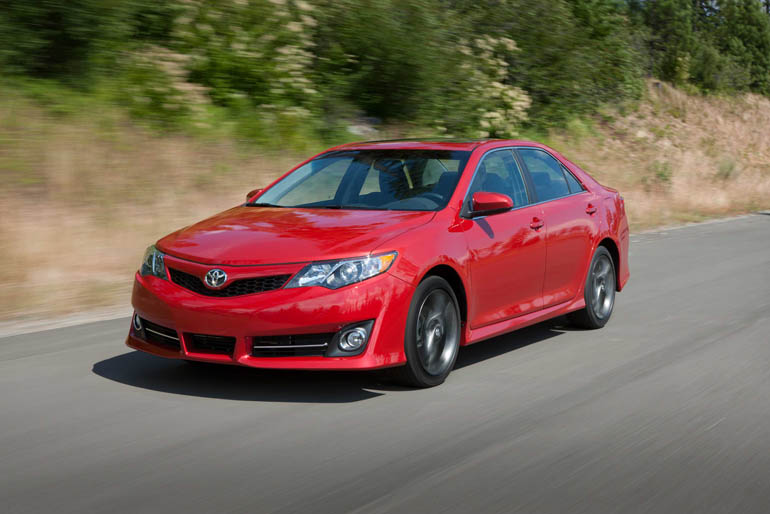 The Toyota Camry has undoubtedly been a major staple here in America and the outgoing 2014 model has held its position in the automotive spectrum well. I recently had the opportunity to check out the 2014 Toyota Camry SE with the 2.5-liter 4-cylinder engine. In my time with the 2014 Camry I was reminded why such a vehicle has led the sales charts and done so with such a simplistic formula.

In a simple way of putting it all, the Toyota Camry just works. It is simple enough in its road mannerism approach but not to the point that it goes completely unnoticed in its duties. The proven reliability track of Toyota exudes in the Camry and you really can’t find many faults with America’s best midsized seller.

The 2014 Toyota Camry isn’t much of an enthusiast vehicle. Though, I would go as far as to say its 2.5-liter 4-cylinder does a respectable job of keeping its driver entertained with enough power to keep up with the moving crowd on the road. Basically, the 4-cylinder Toyota Camry proves to utilize all of its 200 horsepower in an economical fashion sending it through the 6-speed automatic transmission. 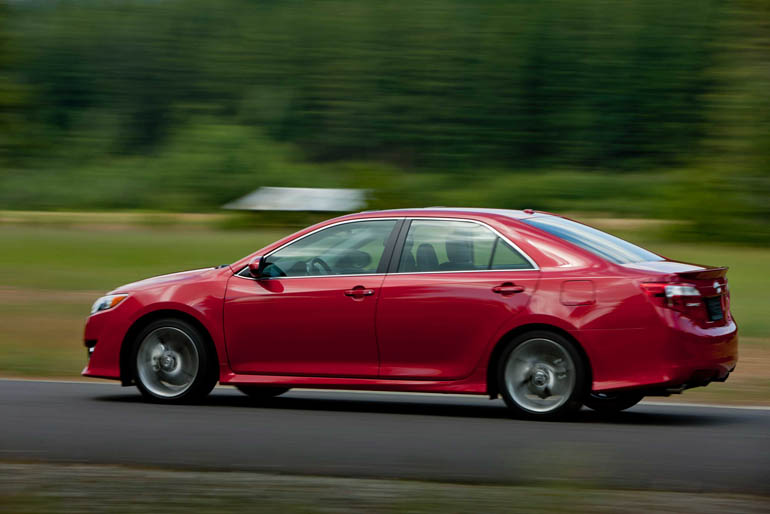 There really isn’t much to be discerned in the Camry’s base powertrain as the transmission lands in the proper gear time after time as the 4-cylinder winds up to its redline around 6,400 rpm. Even the slight buzz of the engine isn’t ever overly annoying or intrusive. It just gets the job done with no fuss. 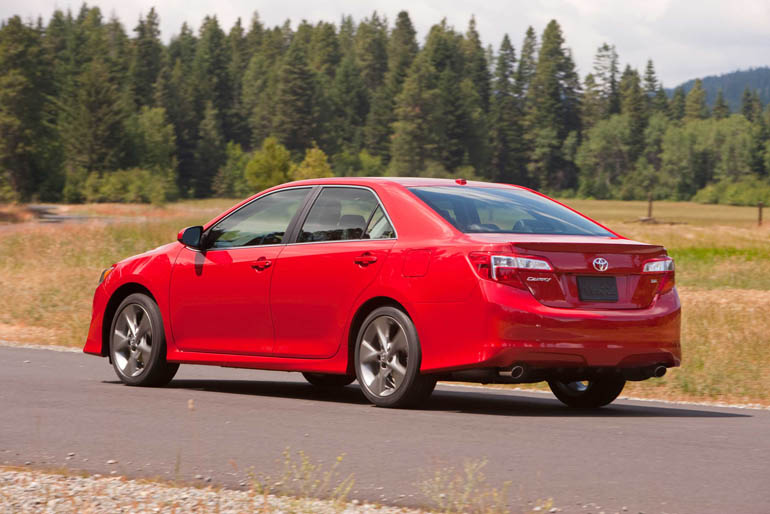 The 2014 Toyota Camry in the SE trim adds a bit of sporty styling but retains the totality of its subdued attitude on the road and in terms of its cabin. Inside of the 2014 Toyota Camry is a familiar cabin that serves more as a basis for adding on options and trim packages. This basis is also something that is a foundational attribute in the line of Toyota vehicles. All of the controls are minimalistic, never confusing.

The plastics throughout the cabin are utilized in a smart manor with the exception of various molded pieces that attempt to pass off as metal or real stitching. In those few faults the Camry retains its placement, never to lean into the luxury category. 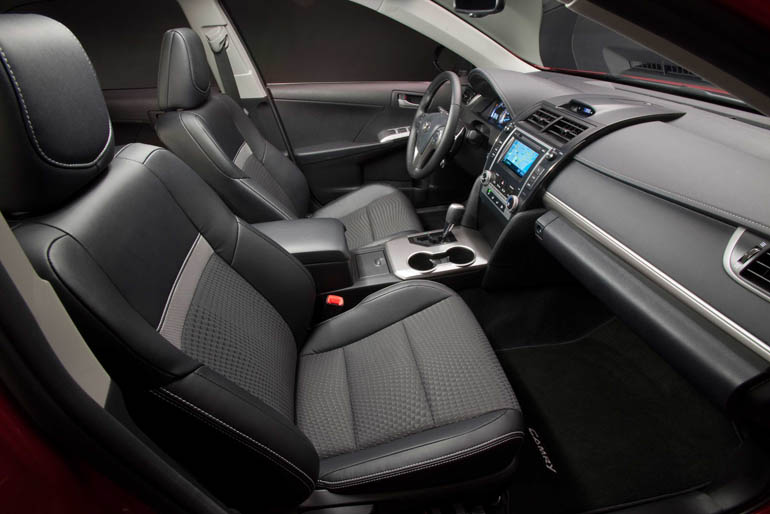 Driving the Toyota Camry SE 4-cylinder is more of a passive experience than anything you want to really get all aroused about. The ride quality is spot on for balancing a soft yet well-damped stance, as is braking and acceleration. Reaching outside of the Camry’s demeanor will exhibit understeer when pushed hard into turns, mostly an obvious character of such a vehicle with power sent to the front wheels. Fuel economy has also carried the Camry through many years of being a go-to for the economical-minded getting 25 mpg city, 35 mpg highway and 28 mpg combined. Not to mention, the Toyota Camry Hybrid is there to take those figures to 44 mpg on the highway or better. 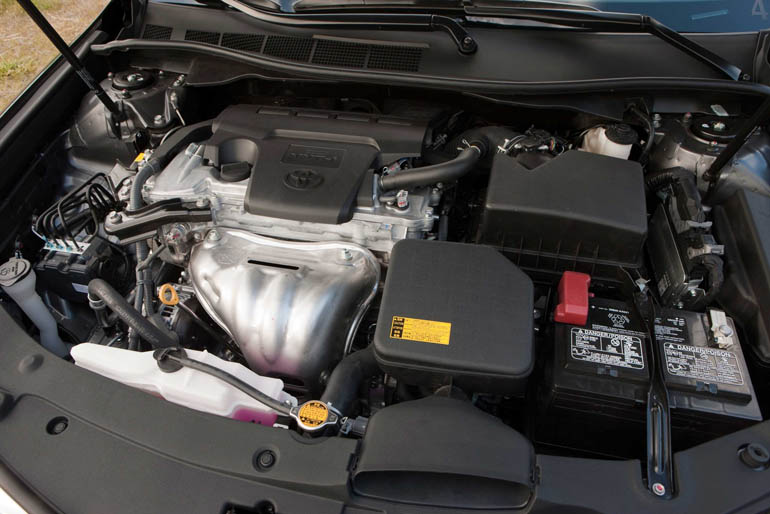 For a vehicle that has aged so well and proven to keep consumers coming back, the Toyota Camry has a coveted formula that we only hope to see polished with an injection of excitement in its full redesign for the 2015 model year. The quality perception with a starting price of $21,000 and the unsurpassed Toyota reliability aspects all pay attribute to the Number One Seller. My 2014 Toyota Camry SE 4-cyl test vehicle had an as-tested price of $27,335 (including a $760 delivery, processing and handling fee) with a few option packages bundling items like the GPS navigation system with voice recognition, streaming Bluetooth audio, the Entune app suite, floor mats and wheel locks for the SE trim’s 18-inch alloy wheels.