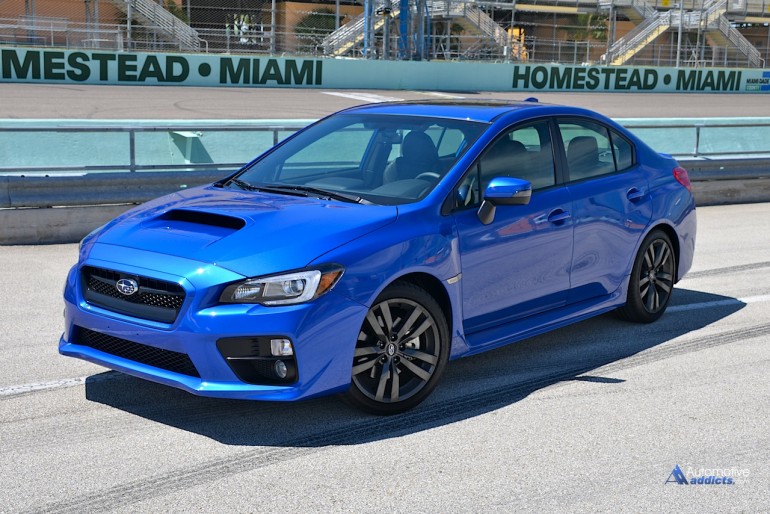 The 2016 Subaru WRX at Homestead-Miami Speedway

We recently made a trek to the Homestead-Miami Speedway taking Subaru up on an exclusive invitation to test out the new BRZ, 2016 WRX and WRX STI on the track. We embarked on this trip with our X-Factor Winning Pop Star friends, Alex and Sierra, in tow, in a high anticipation of meeting some great people and having fun. That’s exactly what we did. 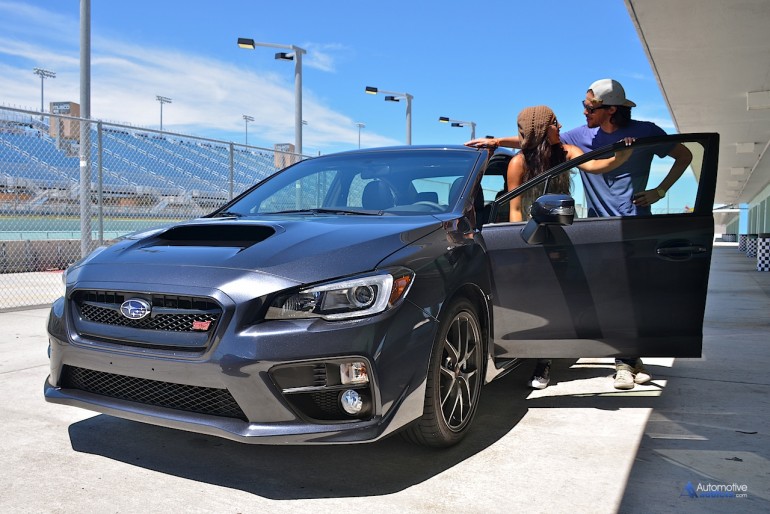 There is not much that can be compared to the enjoyment and freedom of being on a race track. With that in mind, it was a delight to take the Subaru BRZ in its tasteful Series.Blue Edition trim and 6-speed manual transmission out for a several laps navigating through a portion of Homestead’s road course and high embankments of turn three and four. We also took on the new 2016 WRX with the automatic (CVT) transmission, which now behaves much like a traditional automatic with pre-set simulated gear shifts to kick-down the rpm throughout the band up to triple digit speeds on the track. At the high end of the performance chain for Subaru, we got to jump behind the wheel of the new 2016 WRX STI, which just like the 2016 WRX, features an upgraded infotainment system taken from the latest Impreza sedan. 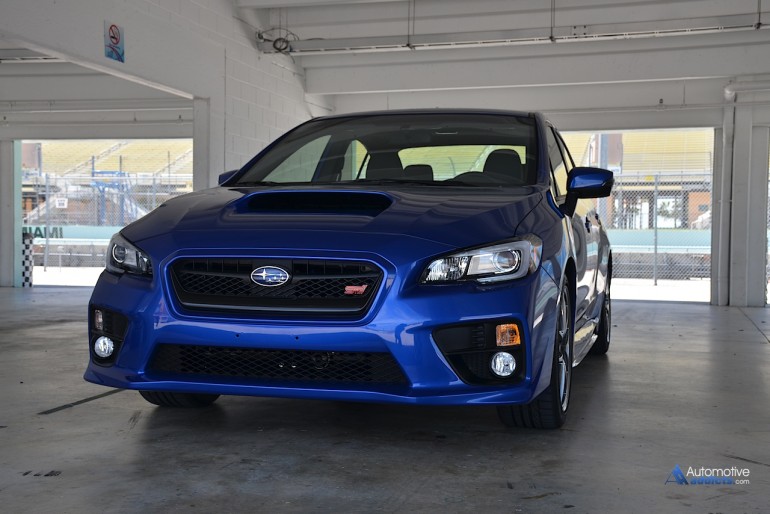 The 2016 Subaru WRX STI takes a well deserved rest in the pit area at Homestead-Miami Speedway.

The track experience was a blast. Our good friends and Columbia Records artists, Alex Kinsey and Sierra Deaton (Alex & Sierra), joined us on this journey to break the cycle of touring, writing, and recording to explore the AutomotiveAddicts.com lifestyle. Strapping them in the passenger seats and later in the driver’s seat of all three Subaru vehicles left a life-long impression on them. That’s no easy feat! In 2013, Alex & Sierra claimed the winning spot on the X-Factor and have had great success in releasing their Album, “Its About Us,” which is available on iTunes here. 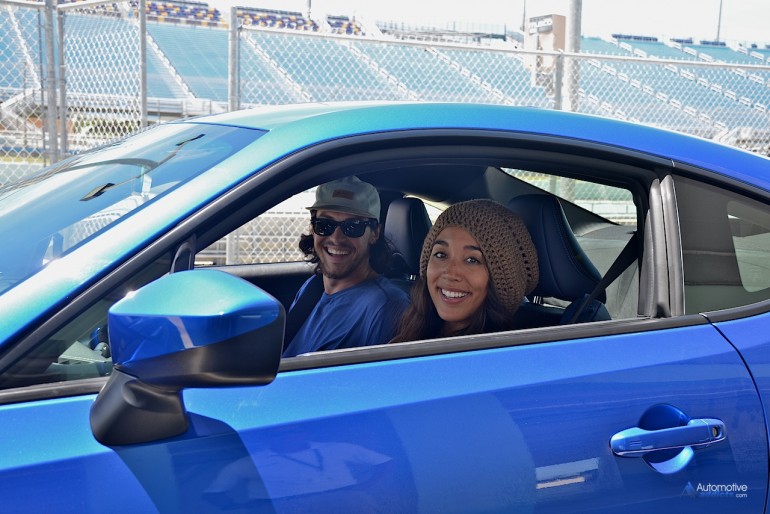 Sierra gets ready to treat Alex to a spirited trek around Homestead-Miami Speedway in the standard transmission equipped Series.Blue Edition BRZ.

Having already experienced the 2015 Subaru BRZ and WRX STI on our local roads and highways, it was a pleasure to see how well they adapt to the race track. The BRZ, without a doubt, was the most fun, even with its meager 200 horsepower from the 2.0-liter Boxer 4-cylinder engine. Rowing through the 6-speed manual, diving into turns, and powering out of them never felt so confident-inspiring allowing the rear end to slowly slide around in a controlled succession. Piloting the 2016 Subaru WRX STI was nearly as fun, enjoying the thrust of the 305 horsepower and 290 lb-ft of torque from the boosted flat 2.0-liter 4-cylinder powering all four wheels felt as if the vehicle was on rails. 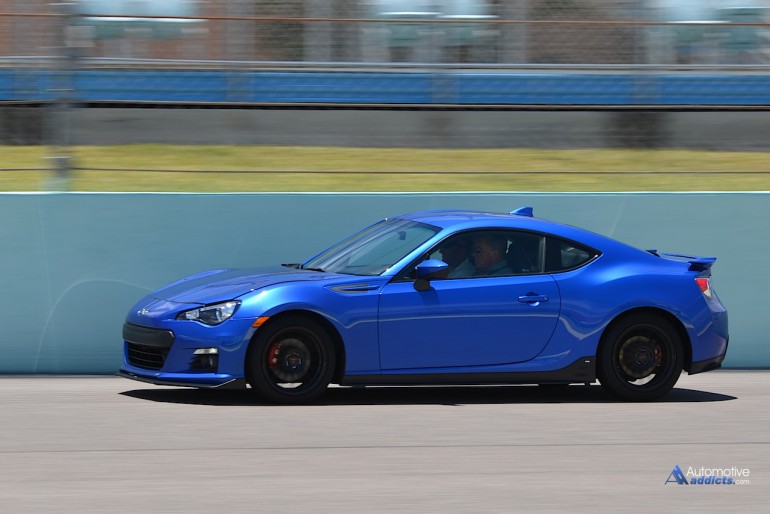 The concluding highlight of our trip to Homestead with Subaru was taking hot laps in both the BRZ and WRX STI with racing legend Bill Adam. As some may know, Bill spent time driving with Bob Tullius in his Triumph TR8 in the IMSA series capturing GTO class victories at 12 Hours of Spring, Road America, Daytona and Mosport. Continuing his career, as a highlight, Bill finished 3rd place in a Prototype Jaguar GTP racer at Road America. Among many other races, Bill Adam and Bob Tullius led nearly every race in the Jaguar. Leading up to later years, Bill drove with legends such as Brian Redman, Juan Fangio, and Hans Stuck, taking home many podium finishes along the way in the Champion Racing Porsche. To ride along in the new Subaru BRZ and WRX STI with Bill was a treat for all of us as he once again pushed the limits of a vehicle selecting impeccable racing lines showing us all what the Subaru vehicles were truly capable of. This is one event we will never forget. 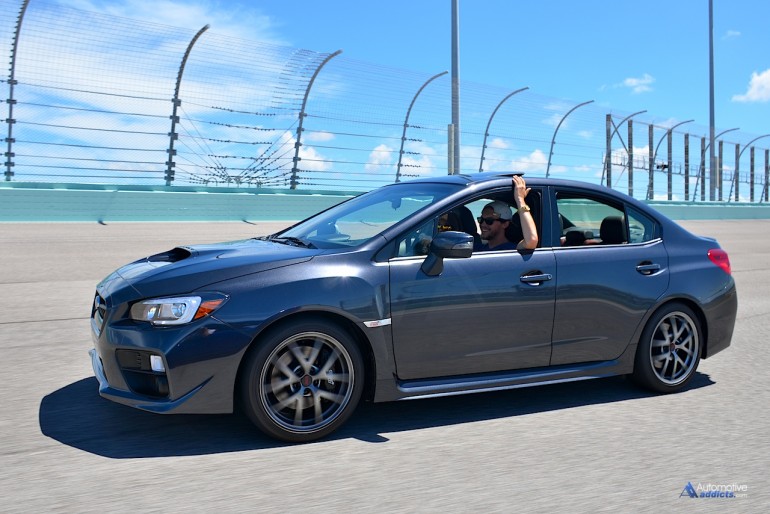 Alex Kinsey has a little fun with the 2016 Subaru WRX STI on a couple relaxed runs around the circuit. The STI is equally at home full out on the track as it is being used as a daily driver for a family of four.

Be sure to check out our exclusive Subaru BRZ and WRX STI test drives for more information.

I am fortunate to call Canadian Motorsport Hall of Fame driver Bill Adam my friend. Interestingly, both of us have May birthdays. Bill’s is on May 25 and mine on the 27th. Our Subaru hosted track day at Homestead-Miami Speedway fell on May 29th, allowing us to spend some time in celebration at a place where a racing legend and an automotive journalist call home, the track. 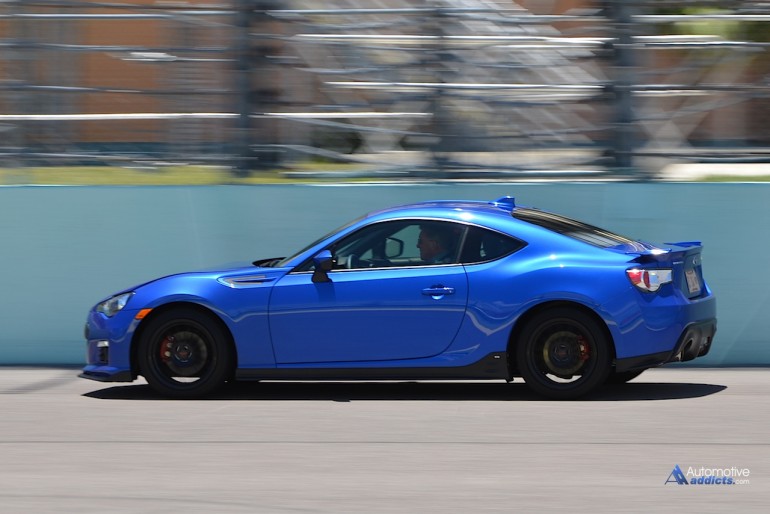 Bill promised me a drive in the Subaru that I would never forget and I can assure you I will always treasure the excitement and joy of being driven around the majestic speedway by one of the world’s greatest drivers in the quite capable 2016 Subaru BRZ.

About halfway around the first turn Bill leaned over and said, “This BRZ is a fantastic little car.” The punishment that the hall of famer then inflicted on the little boxer powered rear wheel drive sports car was incredible. I have spent plenty of time behind the wheel of Subaru’s affordable fun-mobile, but it wasn’t until I saw a racing legend behind the wheel that I realized just how incredible the value to performance ratio really is. 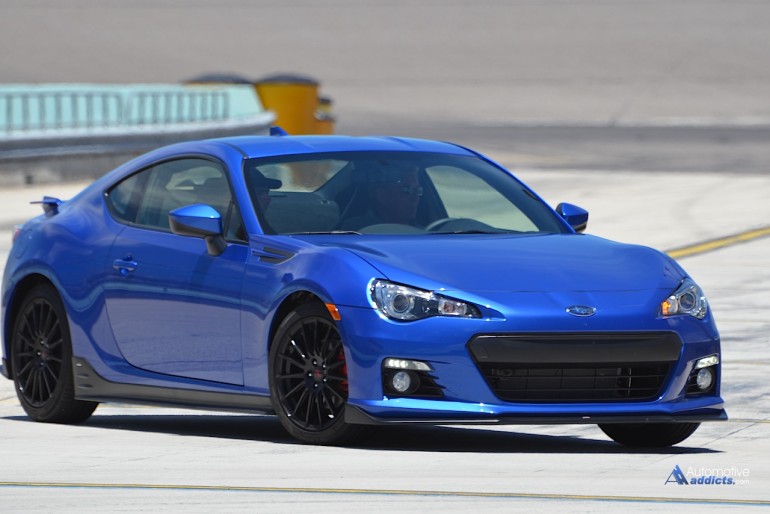 We entered the high embankment of the raceway at 90 miles-per-hour and Bill held the throttle to the floor and announced our speed as we drove through the corner. One hundred, one hundred and ten, one hundred and twenty. We left the corner into the final straight and I watched as the speedometer neared 130 miles per hour. The BRZ felt just as stable as it did at any speed, a testimony to the well equipped option packed $30,300 beauty. 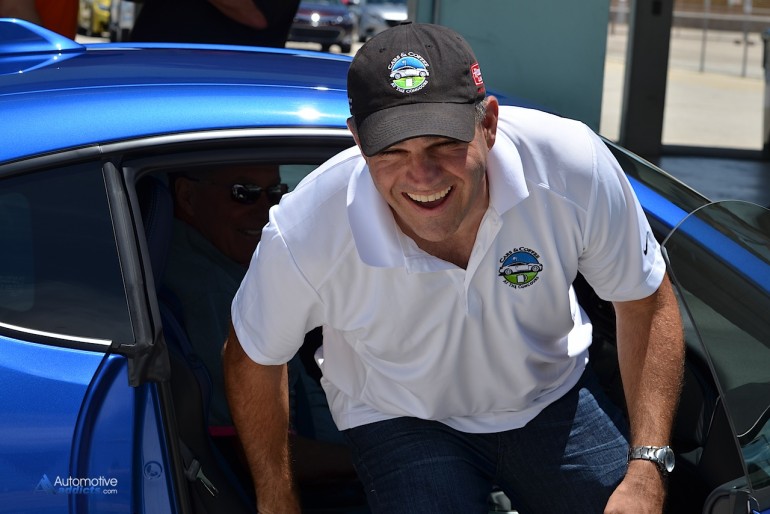 While there are many more powerful cars on the road, including the AWD turbocharged Subaru WRX and WRX STI, I am hard pressed to think of any that can provide the on track thrills and fun for only $30k – a lot less if you go for the base model. Thanks to Subaru for an amazing day and for building a wonderfully affordable, yet incredibly fun little sports car.

And thanks to Bill Adam for ruining me for all other track days!

Alex Kinsey has a little fun with the 2016 Subaru WRX STI on a couple relaxed runs around the circuit. The STI is equally at home full out on that track as it is being used as a daily driver for a family of four.

Sierra gets ready to treat Alex to a spirited trek around Homestead-Miami Raceway in the standard transmission equipped Series.Blue Edition BRZ.

The 2016 Subaru WRX STI takes a well deserved rest in the pit area at Homestead-Miami Raceway.

The 2016 Subaru WRX at Homestead-Miami Raceway

Sierra and the Series.Blue Edition BRZ

Alex and the Series.Blue Edition BRZ