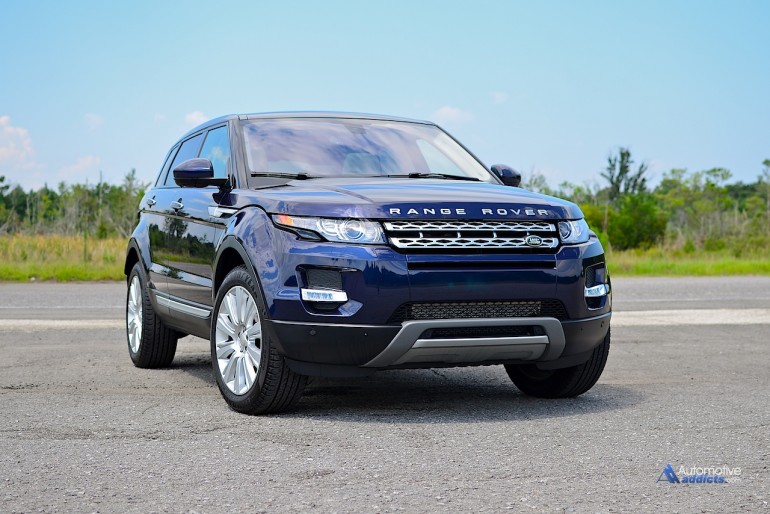 Ever since the conception of the stylish and off-road capable Range Rover Evoque graced us as a 2012 model year, it was won many critics over to capture major awards. Upon its introduction, the Range Rover Evoque received both the 2012 North American Truck of the Year Award and the Motor Trend 2012 SUV of the Year Award. Land Rover’s formula for their smallest vehicle hasn’t changed much over the years since its beginning reiterating the popular saying, “don’t fix it if it aint broke.” 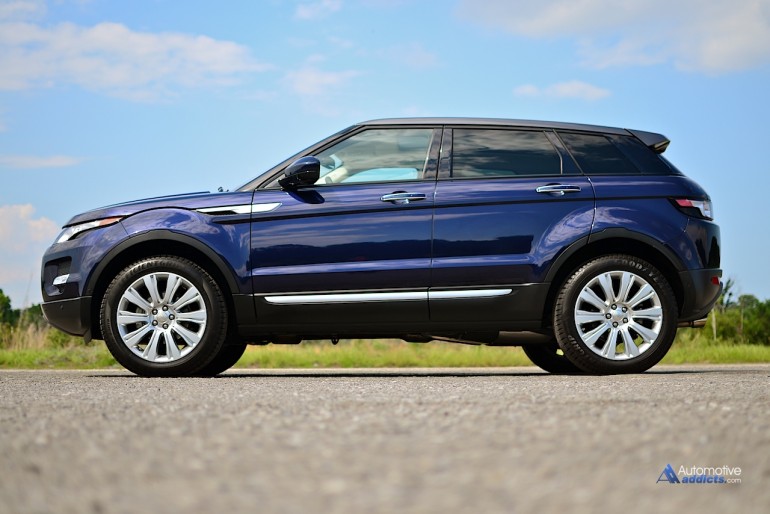 The 2015 Range Rover Evoque carries the traditional values of the Land Rover brand in its ability to go where most vehicles would not dare set their four tires. Wrapped up in a relatively economical package surrounding its compact size, the 2015 Evoque retains its turbocharged inline-4-cylinder engine with 240 horsepower at 5,500 rpm and 250 ft-lbs. of torque at 1,750 rpm. Due to new 9-speed automatic transmission, first added to the lineup for the 2014 model year, the 2015 Evoque adds to is economic equation to muster out an additional 2 miles to its highway fuel mileage over the previous 6-speed automatic unit. Now getting a respectable EPA-estimated 21 mpg in the city and 30 mpg on the highway, the latest Evoque is a comparable contender within the segment for compact luxury crossovers that pits its off-roading capabilities ahead of most. 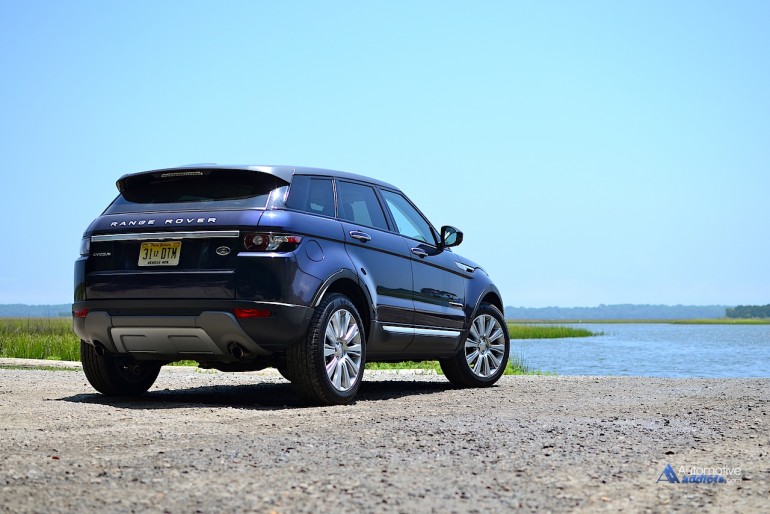 Driving the Range Rover Evoque in its Prestige trim exhibits a remarkably stable chassis on the road. The stability of the new Evoque is a trait that is desired for many when making a transition from a car to the relatively tall stature of Land Rover’s compact crossover. However, the driving dynamics tend to settle on a positive note with its decent body balance that gives away to an unwanted character in the 2.0-liter turbo engine’s inconsistent power output. The power from the turbo-4 comes on only after things start moving. Fundamentally, the Evoque suffers from serious turbo lag where getting out of the hole from a stop becomes a nearly annoying case, especially in the midst of heavy intermittently-moving traffic.

Apart from the lagging engine until it hits nearly 2,000 rpm, the Evoque moves along nicely through a surge of power at the engine’s midrange rpm. For the most part, the Evoque is eager to scoot along provided you are already in motion. The midrange power is generous – as it is nearing redline blipping through each forward gear of 9-speed automatic transmission reserving 9th gear for highway speeds. Going through the power band doesn’t come without a bit of abrasive sound emitting into the cabin while the erratic power is almost as equally coarse. 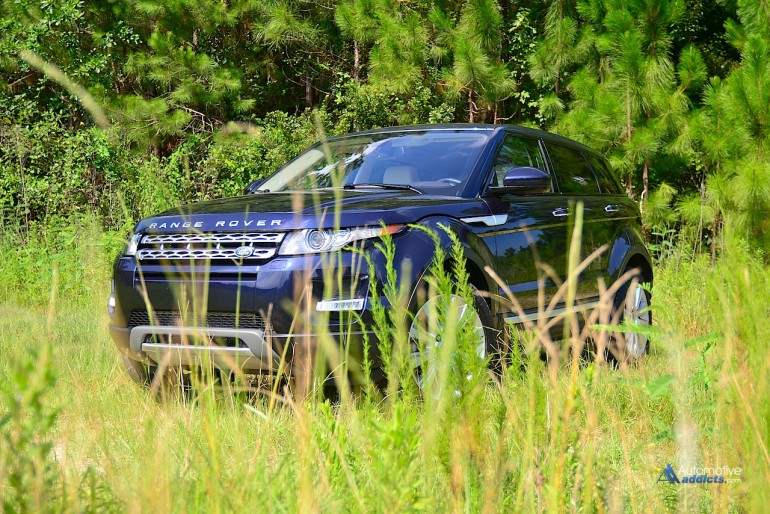 The off-road prowess of the Evoque follows some of the literal footsteps if its larger siblings only diminishing some of those qualities in the confides of its smaller size, short wheelbase and lack of any adjustable suspension. Apart from that, the Evoque can still wade through nearly 20 inches of water due to its high-mounted air intake, alternator waterproofing and 8.3-inches of ground clearance. The all-wheel-drive system employs Land Rover’s famous Terrain Response System with multiple modes for just about any type of loose road surface that you would put such a vehicle through. Use of the Terrain Response System’s Mud-ruts setting is one way of allowing the computer to assist you through mitigation of wheel slippage by following a graphic displayed on the center color gauge cluster information screen. 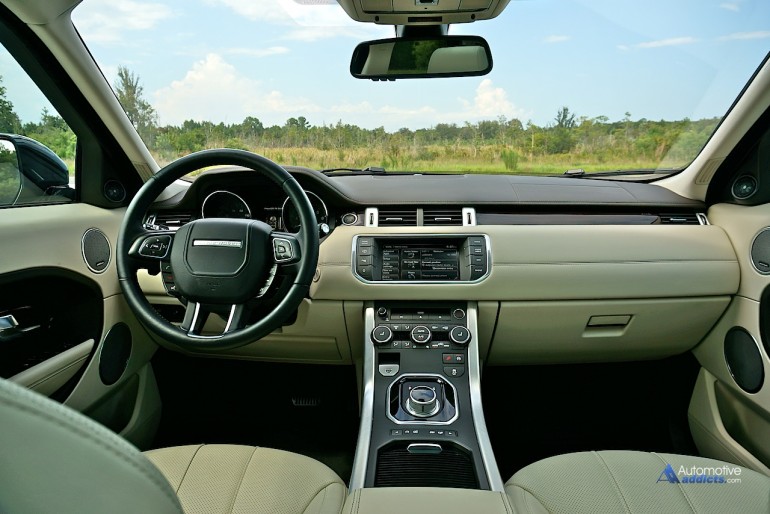 In my many jaunts in older models of the Range Rover Evoque I was pleased with the interior appointments being several leather wrapped surfaces and a limited amount of wood and aluminum trim in the right places to exude a true luxury feel. The seating positions are ideal for optimal comfort on full-gas-tank trips, while the ride quality is a good balance between firmness with just enough give and dampening going over rough surfaces. 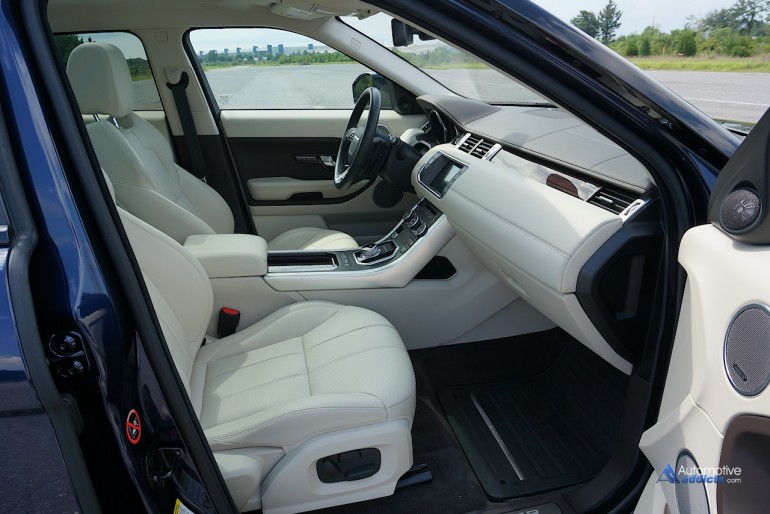 The only disappointment with the interior, apart from the obvious size classification, is left to its slow responding infotainment unit that still deserves a major overhaul to address its many shortcomings. The system, combining a set of physical buttons and an on-screen touch graphical interface through the color LCD screen, tends to lag and respond slowly to each input. Moreover, the system fails to group features in a traditional sense, especially when it comes to the camera system that combines up to 4 cameras to monitor terrain or a review for backing up. Many other automakers have made better use of combining imagery from a set of cameras to emulate a 360-degree around-view whereas Land Rover setup is quite misleading and graphically challenging. To the camera system’s benefit, it can be enabled at any speed.

It is a rather hard pressed task to find anything comparable or better than the Range Rover Evoque when you factor in its true off-roading abilities wrapped up in compact plush luxury package that doesn’t cost north of $60K. The inspired confidence on questionable terrains with the versatility in a compliant ride on road remains to be the standout quality for the Evoque.

Even with its pricing, the Evoque captures its relevancy and high demand within its segment, starting at a price of only $41,100 while my nicely-optioned test Range Rover Evoque Prestige-trimmed test vehicle comes to an as-tested price of $58,107.