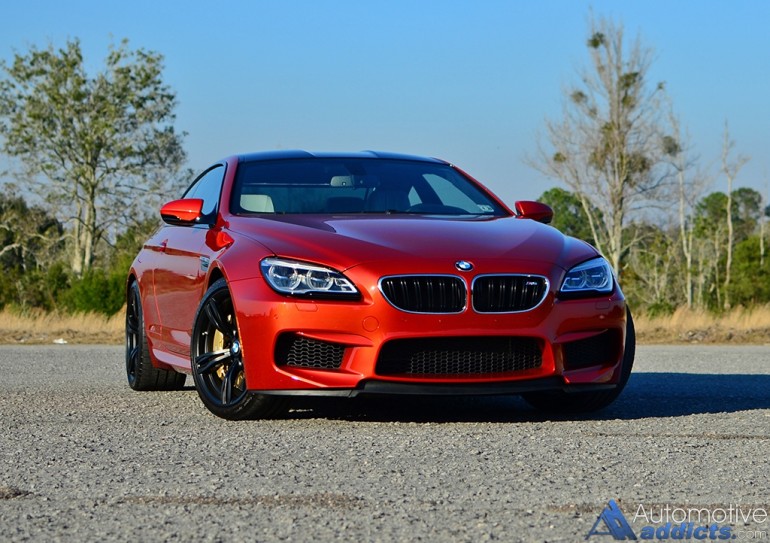 BMW’s M (Motorsport) vehicles have always been my favorite. As of late, some have questioned BMW’s ability to keep the M-branded vehicles true to their roots where few are described as being more isolated from the road than purists would like. In my recent excursions with several new model M vehicles, the jury settled mostly positive but not completely definitive on a verdict. However, with my recent week-long thrill ride in the 2016 BMW M6, I have finally settled on a firm standing position, somewhere right smack in the middle of all the journalistic chatter. I know, that probably doesn’t help you much. Just trust me that BMW hasn’t completely lost their way.

>> Get the best price on the BMW M6 from a network of local dealers now. << 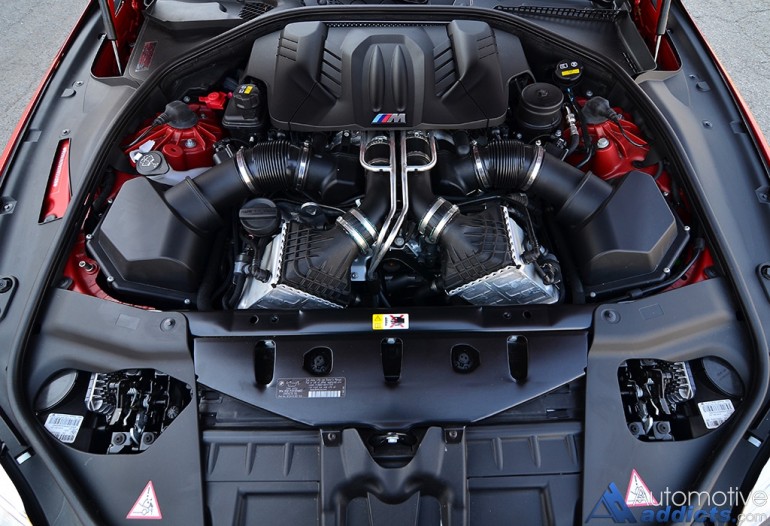 The 2016 BMW M6, residing at the upper echelon of what BMW has to offer in terms of a true late model M vehicle, puts its 4.4-liter twin-turbo V8 engine at the forefront of what they can serve up for near-supercar performance. With 560 horsepower and 502 lb-ft of torque fed to the rear wheels through a 6-speed manual transmission on my test vehicle, the M6 dashes to 60 mph in just 4.1 seconds. For the 2016 model year, the M6 gets a thrust enhancement by the way of an optional Competition Package that increases horsepower to 600 ponies making that run to 60 in about 4 seconds even easier. 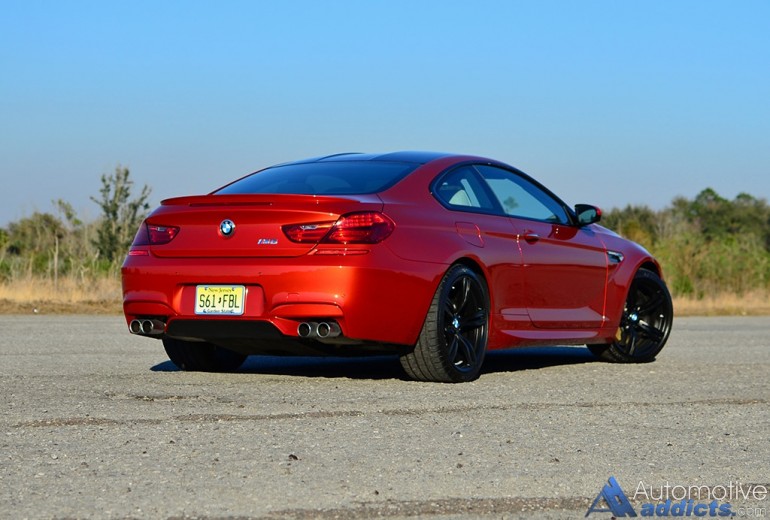 Sliding into turns with the rear end hanging out in oversteer bliss is grin inducing, to say the least. You may do so judiciously with the DSC (Dynamic Stability Control) fully disabled allowing the active M electronic differential to do its thing alternating power left to right, right to left, or locking up dependent on traction. The heavy M6 is still fun – still a BMW M in this department.

Getting that performance will require copious amounts of premium fuel. Filling the 21 gallon tank seemed to be an expected part of driving the M6 even though I was surprisingly able to muster out about 23.8 mpg on the highway and about 14.9 mpg in the city. EPA estimates for the 2016 BMW M6 Coupe come in at 15 mpg city, 22 mpg highway, and 17 mpg combined. The figures are attainable but only by consciously pacing yourself driving conservatively, which is quite difficult when you have 560 controllable ponies at your beckon and your own six forward gear cogs to row. 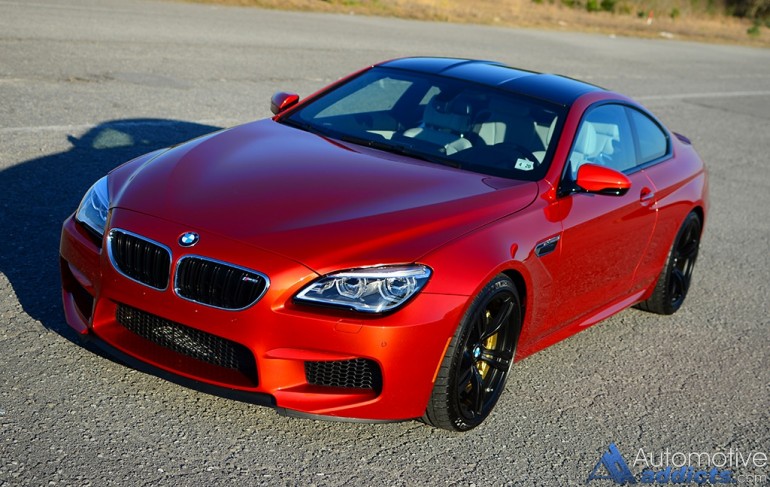 In the coveted GT segment, the BMW M6 holds its own but partly falls short of being a hard-core enthusiast’s ideal Grand Tourer when you consider its shear size and weight tipping the scale at just over 4,200 pounds. While the weight and overall proportions don’t keep the M6 from pinning you deep into the perforated leather and exceptionally comfortable seats, tossing the beastly BMW around tends to slow down the frame rate of overall performance. It’s like watching a KungFoo movie at half speed. It’s plenty entertaining and theirs an abundance of butt-kicking potential, you just know those roundhouse kicks and jumps are taking place in a slower fashion. Don’t get me wrong, the M6 isn’t slow by any stretch of the imagination, it’s just a tad on the beefy side. It’s too bad the beef doesn’t taste all that well when you’re a rear seat passenger. The rear seating is extremely cramped and permitting adult-sized occupants to sit in the back only leaves the driver and front passenger with limited leg room. Though, the ample adjustability of the front seats allow someone who is over 6-feet tall like myself, or someone only 5-feet tall, to find the optimal driving position while getting a butt massage at the same time from the active front seats. 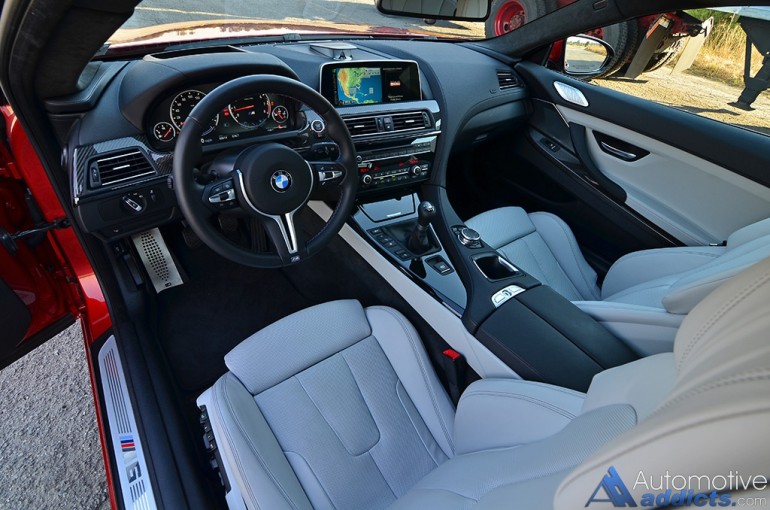 While the isolation from the road is apparent more so in the current 2016 M6 than mostly any other BMW M vehicle, the M6 still attempts to win over purists with the availability of a true 6-speed manual transmission over the lightning-fast-shifting 7-speed dual clutch unit. Getting a test vehicle equipped with a manual was already a surprise, as was the perception of having a better-connected-to-the-road feeling by rowing your own gears. BMW’s addition of a down-shift rev-matching program to appease those who rather not learn the art of heal-toeing is a welcomed addition, which is enabled in the default Efficient and Sport drive modes. The Sport Plus drive mode, advancing the throttle position, leaves the rev-matching-heal-toe action to yourself without any intervention. 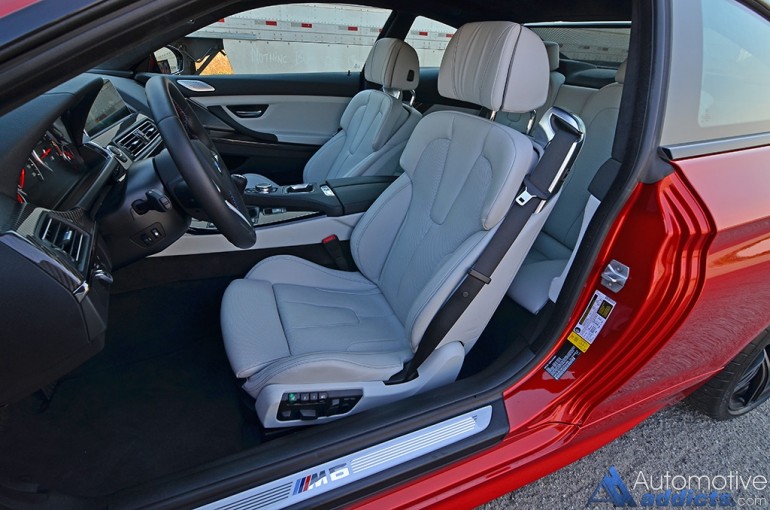 I won’t ever say BMW has lost their way with M vehicles. However, the 2016 BMW M6 exhibits such a plush cabin that one would get lost in translation thinking that the M6 is just a top-of-the-line 6 Series with a 6-figure price tag to match. While that may be somewhat true, the M6’s remarkable twin-turbo V8 combined with the sporty driving dynamics through use of Sport and Sport Plus modes to stiffen the dampers, add an excessively heavily weighted feed to the electric steering rack, and advance the throttle mapping, turn the M6 into a thrasher ready to carve up canyon roads in style. Unfortunately, the carving is like a heavy samurai sward with a creatively engraved handle and a blade that is in need of sharpening on one edge. At least it’s perfectly balanced. 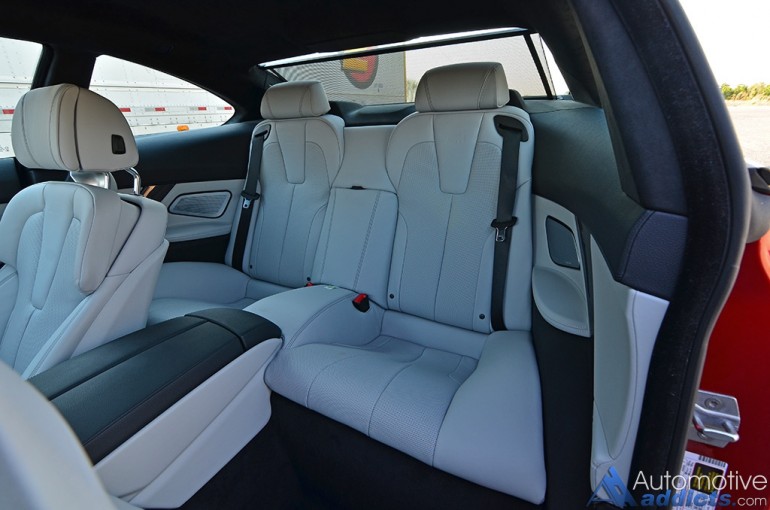 My test vehicle is equipped with massively sized carbon ceramic brakes that bite harder than Pit Bull an in illegal dog-fighting ring. While the brakes are quite effective at speed, around town they can be a bit touchy and overly compensating catching you and your retinas off guard. Also equipped on my test vehicle, are a set of staggered 20-inch wheels (wrapped in Michelin Pilot Super Sport rubber) to fit over the large proportioned brakes along with an Executive Package that added a color heads-up display, heated steering wheel, head and ventilated active front seats, power rear sunshade, and an excellent-sounding Bang & Olufsen Sound System with a motorized-rising center channel tweeter. 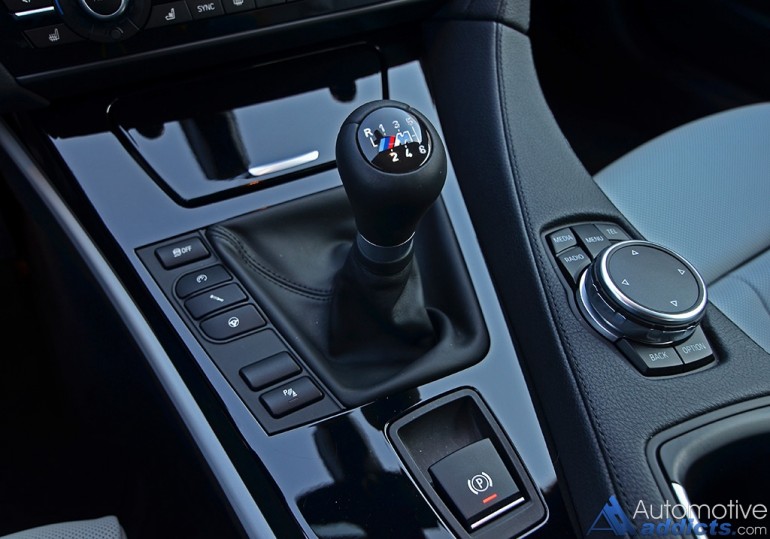 The time I spent with my 2016 BMW M6 test vehicle I had the opportunity to bring it to our February 2016 edition of Automotive Addicts Cars and Coffee show. Our show for the month of February celebrated BMW and MINI vehicles where we place them on our upper level of The Florida Times-Union parking facility. Not only was the M6 a big hit among other BMW vehicles but parking it next to a fine example of an original E30 M3 demonstrated just how far BMW’s M has evolved and utilized technology to help along the evolution of being a faster and more capable driving machine. Our BMW and MINI demonstration also gave us the opportunity to showcase the M6 test vehicle to potential buyers and dreamers who have long been champions for the BMW M brand and all that it signifies.

>> Get the best price on the BMW M6 from a network of local dealers now. << 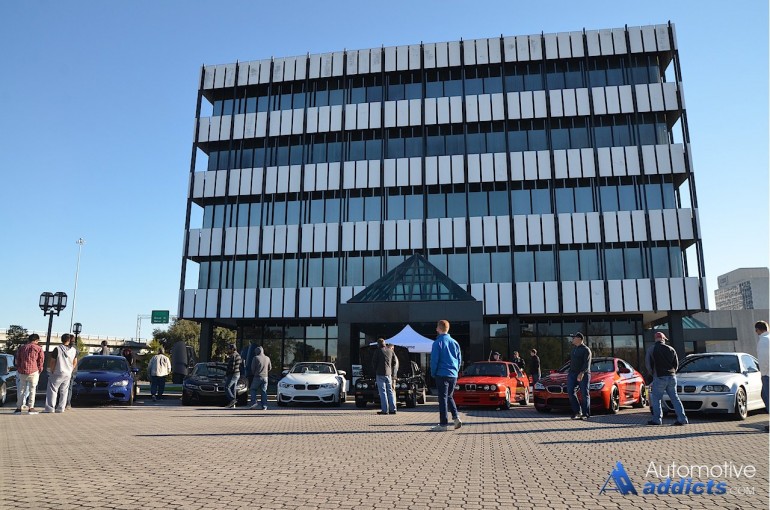 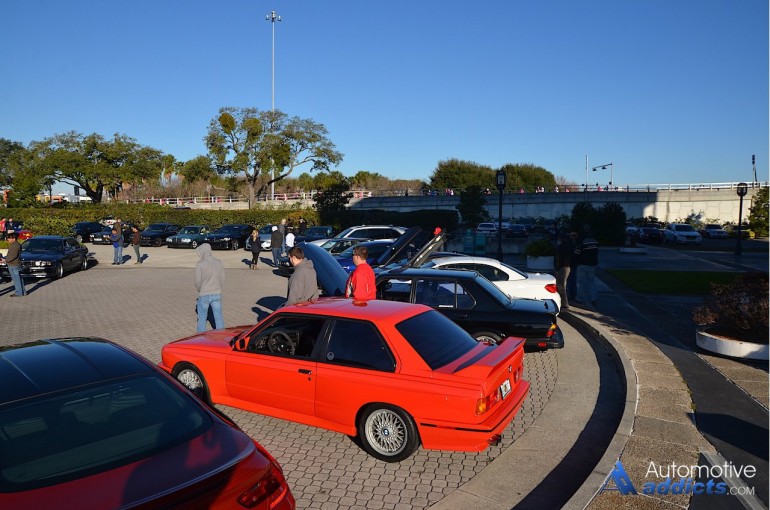 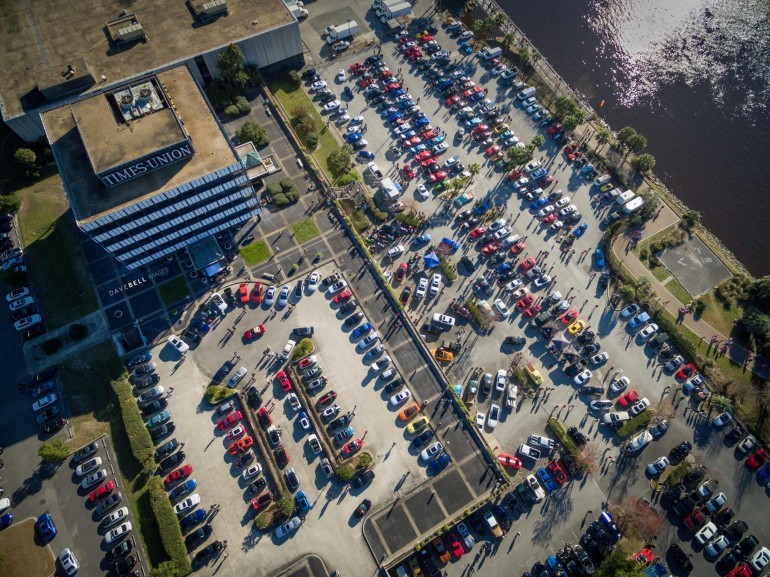