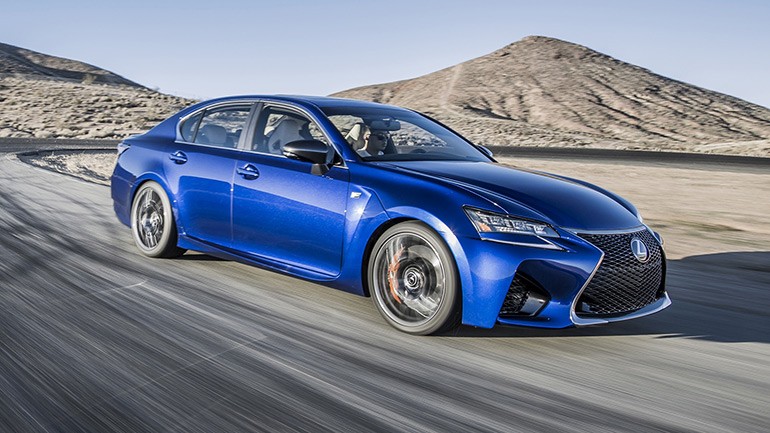 The latest J.D. Power Vehicle Dependability Study has been released with Lexus retaining its top position for the fifth year followed by Porsche, Buick and Toyota. The latest study has departed from the traditional mold when it comes to reliability measures. Today’s matrix that directly impacts the latest study is driven more by technology than it has ever been. Technological issues are being a major determining factor for how consumers rate the reliability of their vehicles. With that in mind, we find it to be no surprise as to some of the rankings considering the operation of some of the latest infotainment systems and new safety tech features have a certain level of user friendliness, or lack thereof, perceived by consumers. However, the rankings still reveal a relevant and overall breakdown of how well certain brands perform when it comes to vehicle reliability. 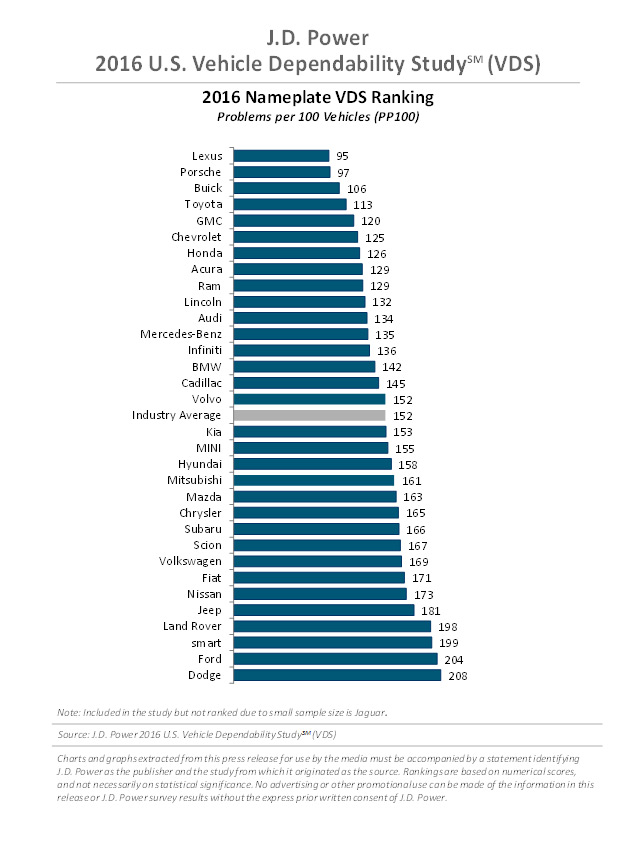 TROY, Mich.: 24 February 2016 — Problems with technology continue to affect vehicle reliability according to the J.D. Power 2016 U.S. Vehicle Dependability StudySM (VDS), released today. The number of problems with infotainment, navigation and in-vehicle communication systems—collectively known as audio, communication, entertainment and navigation or ACEN—has increased and now accounts for 20% of all customer-reported problems in the study. ACEN is now the most problematic area on most vehicles and is the cause of the industry’s 3% year-over-year decline in vehicle dependability.

“The increase in technology-related problems has two sources,” Renee Stephens, vice president of U.S. automotive at J.D. Power, noted. “Usability problems that customers reported during their first 90 days of ownership are still bothering them three years later in ever-higher numbers. At the same time, the penetration of these features has increased year over year.”

The problems most often reported by owners are Bluetooth pairing/connectivity and built-in voice recognition systems misinterpreting commands. Navigation system difficult to use and navigation system inaccurate are also among the 10 most frequently reported problems.

While automakers, suppliers and even the U.S. government are enthusiastically moving toward putting fully autonomous vehicles on the roads, consumers need to have confidence in the technologies currently in vehicles before they will be willing to take their hands off the wheel of self-driving cars.

“If you think about the technology problems from the study in the context of conversations around autonomous vehicles, the industry clearly has more work to do to secure the trust of consumers,” said Stephens. “Right now, if consumers can’t rely on their vehicle to connect to their smartphone, or have faith that their navigation system will route them to their destination, they’re certainly not yet ready to trust that autonomous technology will keep their vehicle out of the ditch.”

Expected reliability remains critical in today’s automotive market. More than 50% of owners cite expected reliability as one of the most influential reasons for choosing a specific make and model.[1] At the same time, concerns about reliability have risen this year as a reason to avoid particular models.

“The decline in reliability coupled with a record number of vehicle recalls and safety-related complaints[2] affect consumer confidence,” said Stephens. “Dependability has a direct impact on purchase decisions and brand loyalty.” 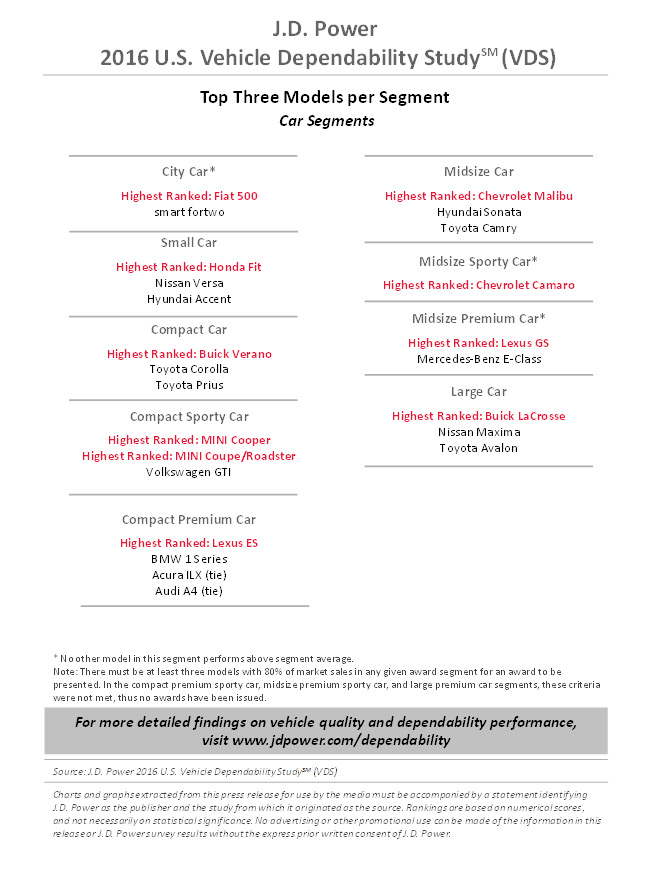 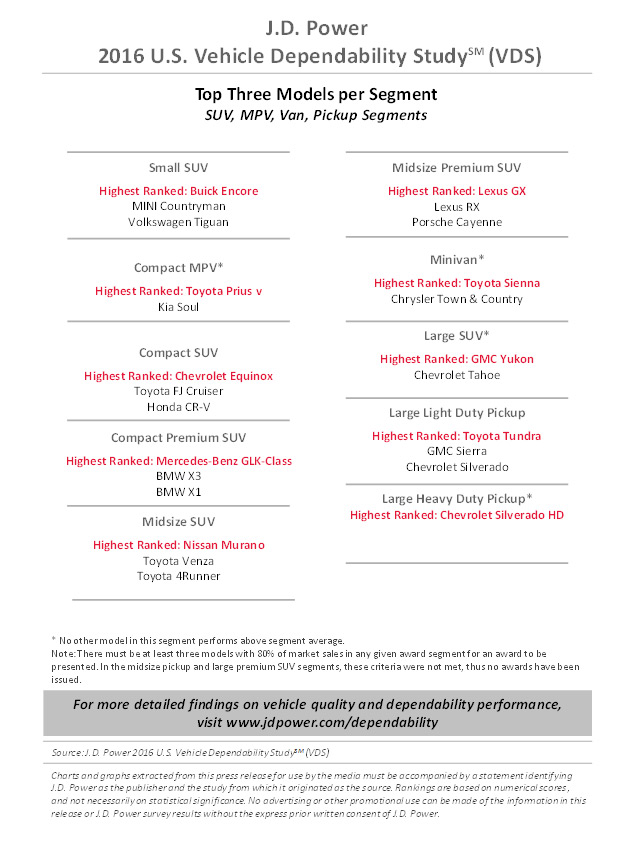 Lexus ranks highest in vehicle dependability among all nameplates for a fifth consecutive year, with a score of 95 problems per 100 vehicles (PP100).

The 2016 U.S. Vehicle Dependability Study is based on responses from 33,560 original owners of 2013 model-year vehicles after three years of ownership. The study was fielded from October through December 2015.

The study, now in its 27th year, examines problems experienced during the past 12 months by original owners of 2013 model-year vehicles. Overall dependability is determined by the number of problems experienced per 100 vehicles (PP100), with a lower score reflecting higher quality. The study covers 177 specific problem symptoms grouped into eight major vehicle categories.