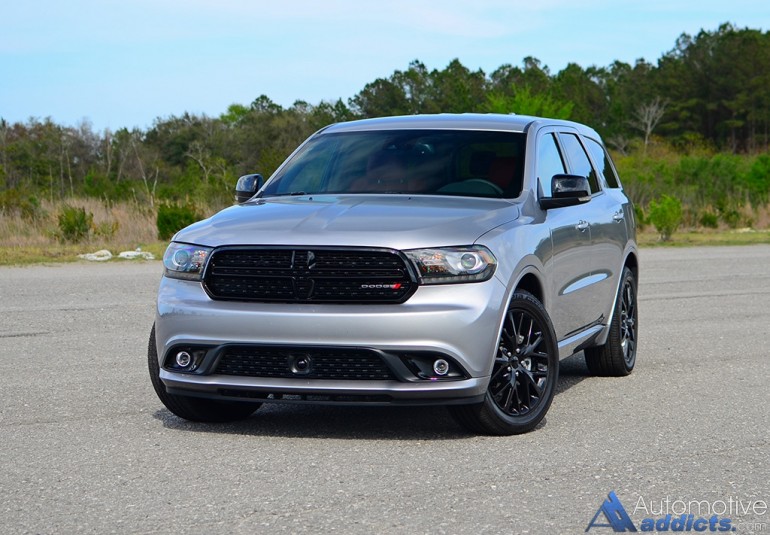 The Durango has long been a big part of the Dodge brand and its existence within the large crossover segment. Sharing its platform with the well-praised Jeep Grand Cherokee, the latest Dodge Durango is the all-American that serves many duties that match and sometimes excel the capabilities of most larger-sized three-row crossovers. In my recent run-in with the Durango, I get a 2016 model year to test drive in the V8 HEMI-powered R/T Blacktop rear-wheel-drive trim and setup to seat six.

>> Get the best price on the Dodge Durango from a network of local dealers now. << 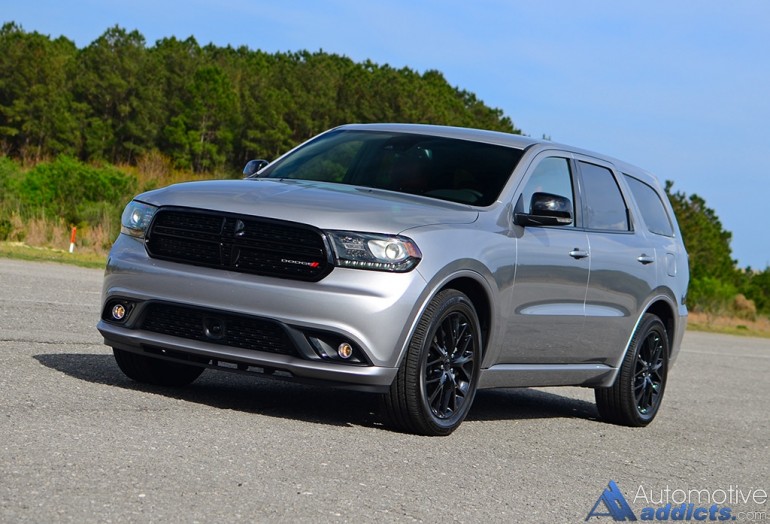 For the 2016 model year, the Dodge Durango remains mostly unchanged with the exception of a start-stop system on the base V6-powered models. In addition, there are added trim variations for the R/T model, and a new Sport button to change the steering wheel effort, advance throttle response, and modify transmission shifting points to hold onto lower gears longer and up-shift more frequently when power is demanded.

My 2016 Dodge Durango R/T Blacktop RWD test vehicle is quite the sporty crossover with bulging body curves to showcase is muscular disposition in having a 5.7-liter 360 horsepower and 390 lb-ft of torque HEMI V8 engine. Mated to the beefy V8 HEMI engine is a ZF-sourced 8-speed automatic transmission that is assured in its gear selections often landing in the proper cog at the right time. Having the 8th gear adds to the fuel economy in conjunction with the somewhat aggressive V8 engine cylinder deactivation to run on 4-cylinders when a light load permits. I found the cylinder deactivation to be quite noticeable with a bit of unwanted vibration and sound. Thanks to an “Eco Off” button on the dashboard, the cylinder deactivation system can be disabled. However, automatic use of the system permitted a solid 23 mpg figure on the highway during a long haul to a couple neighboring cities down Interstate 95 here in Florida. 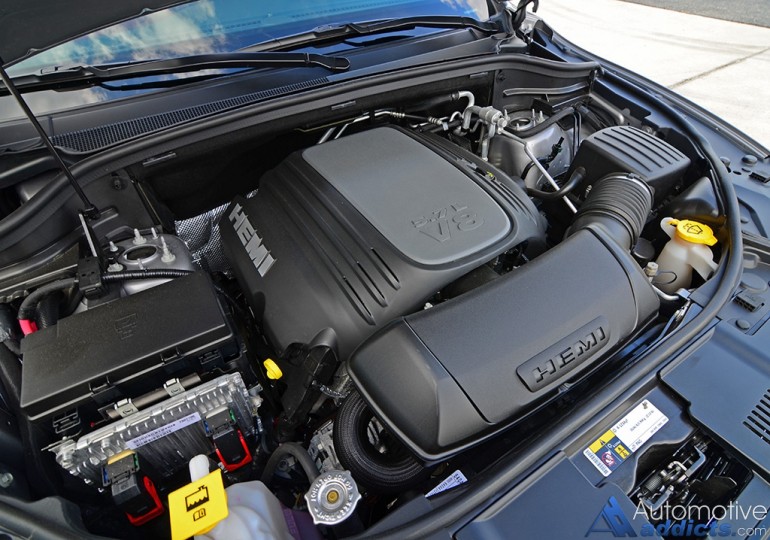 EPA fuel consumption estimates for my rear-wheel-drive Durango R/T are somewhat of a disappointment at 14 mpg city, 22 mpg highway, and 17 mpg combined. Though, credit to the Durango’s cylinder deactivation and my steady right foot, I stayed around 15 mpg in town and held onto the 23 mpg figure on the highway, which is about 1 mpg better than the EPA-stated numbers for both city and highway. 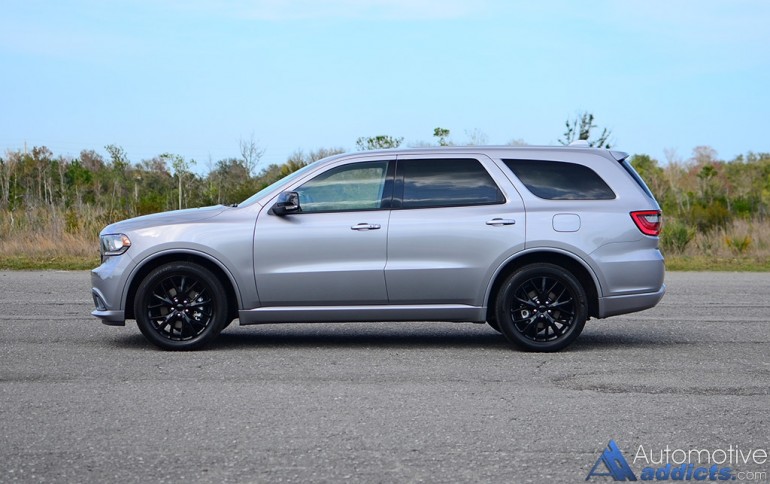 The 2016 Dodge Durango R/T is a decent performer without many qualms in the handling department for such a large crossover utility vehicle. The grunt work from the HEMI V8 was more than sufficient and has the ability to tow up to 7,400, a figure that’s best in the crossover class and only gets better when you move to mammoth-sized body-on-frame SUVs. Zero to 60 mph comes around about 6.4 seconds, rather quick for a large three-row crossover. Following the run to 60 mph is a delightful exhaust note rumbling out back reminiscent to other Dodge HEMI V8-powered brethren. 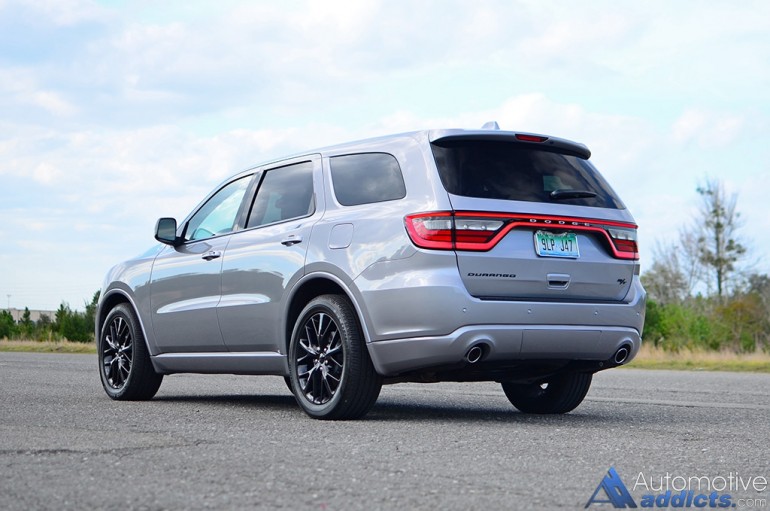 The sport-tuned suspension of the Durango R/T Blacktop provides just the right amount of stiffness and give, for a compliant ride without sacrificing the proper dynamics to match its menacing black-accented look with a darkened grille, trim and, darkened 20-inch alloy wheels wrapped in 265/50R20 all-season tires. The only downfall of the Durango R/T not living up to its sporty character is the braking performance, which I found to be somewhat lacking. While some stopping distance tests show average numbers, the Durango R/T left a bit of braking power to be desired where it is hard to impend ABS lock-up-intervention and the pedal felt somewhat spongy at times.

The cabin of the new Durango R/T makes wise use of its generous dimensions and total cargo capacity up to a spacious 84.5 cubic feet with the 2nd and 3rd-row seats folded. The front seats are visually welcoming, and they have a broad range of adjustability. The second row heated captain’s chairs are nearly as supportive as the front ventilated and heated seats with perforated leather inserts and R/T logo stitching. The third row, only providing seating for two, making the total seating capacity of my particular Durango R/T test vehicle six, has just enough room for average sized adults. Durangos without the 2nd-row captain’s chairs option have seating for seven passengers with a foldable 3-passenger 3-way split bench for the 2nd-row. 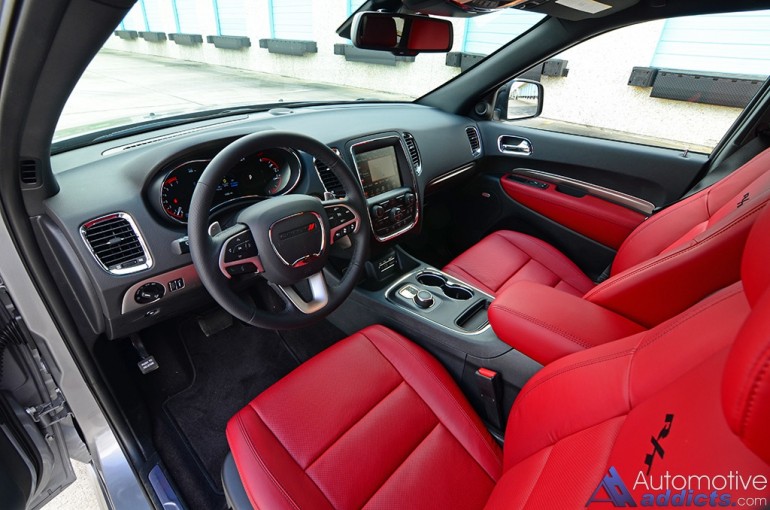 The red color of my Durango R/T test vehicle’s seats added a unique contrasting character to the cabin, in what would otherwise be a blob of dark surfaces lost in translation. The third row for two additional passengers was surprisingly easy to access but through double-folding the second-row seats in a brutish mechanical act. Most of the seating surfaces could have easily used a bit of additional padding as they were initially on the hard side. The dashboard is made up of large soft touch surfaces with chrome-trimmed plastic pieces surrounding the vents and center stack. To round out the accents, there is a limited amount of aluminum trim on the dashboard and door trim as well. Use of Dodge’s electronic gear selector turn knob frees up valuable front row cabin space and incorporates fail-safes to shift automatically into park if you turn the vehicle off while stopped in neutral. In other cases, the vehicle cannot be shut off unless Park is selected. 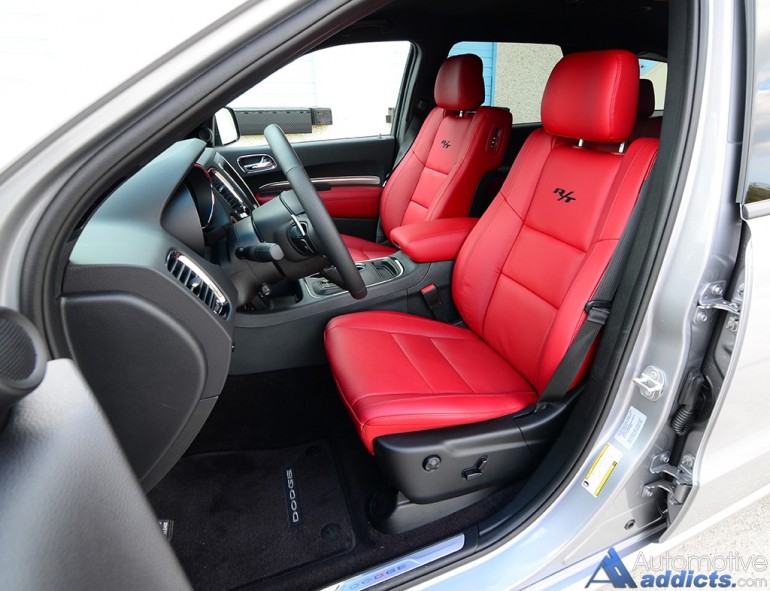 At the front end of technology, the 2016 Durango R/T makes way for several active safety features, in addition to amenities that add a taste of luxury appeal. My nearly-loaded 2016 Dodge Durango R/T Blacktop included the $1,995 Technology Group Package, including a full speed collision warning system, full-range adaptive cruise control, advanced brake assist, and blind spot warning with rear cross path detection. I found the advanced brake assist system to automatically slam on the brakes when backing up to my garage – the system sensed my approach without me braking and then intervened to stop the vehicle before coming within a foot of my garage door. It’s clever tech that works and keeps your insurance premiums at a constant level and pedestrians safe from being impaled by 5,133 pounds of HEMI-powered crossover. 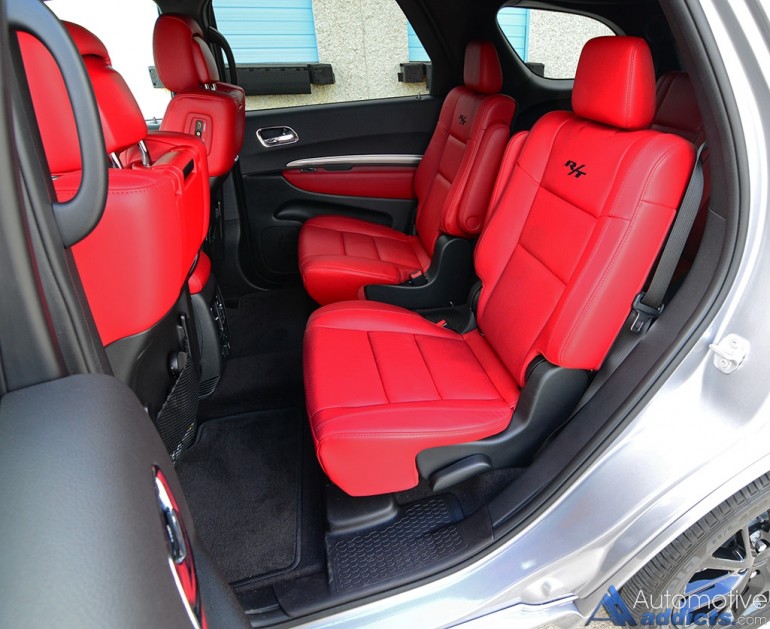 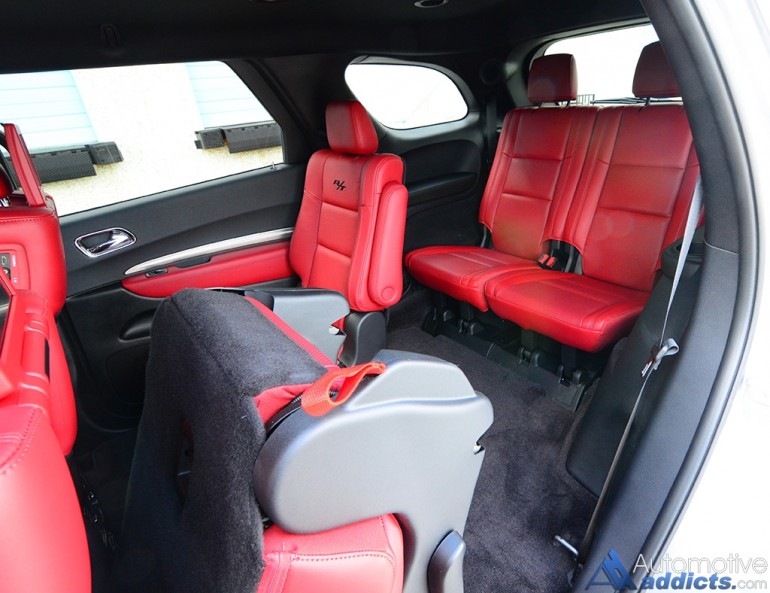 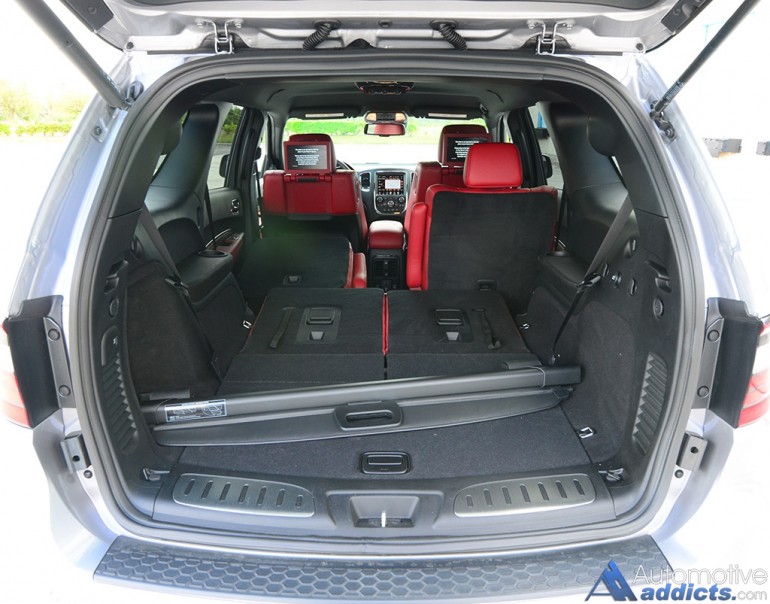 As a three-row crossover that serves multiple purposes without fail, the 2016 Dodge Durango R/T is a highly desirable vehicle that has a value-added price to boot. In the R/T V8-powered trim the Durango starts at $41,995 and has a nearly loaded price of $48,270 including a $995 destination charge for my test vehicle. Also, a base-level 7-passenger 2016 Dodge Durango SXT V6 starts at just $30,495 before the destination charge.

>> Get the best price on the Dodge Durango from a network of local dealers now. <<