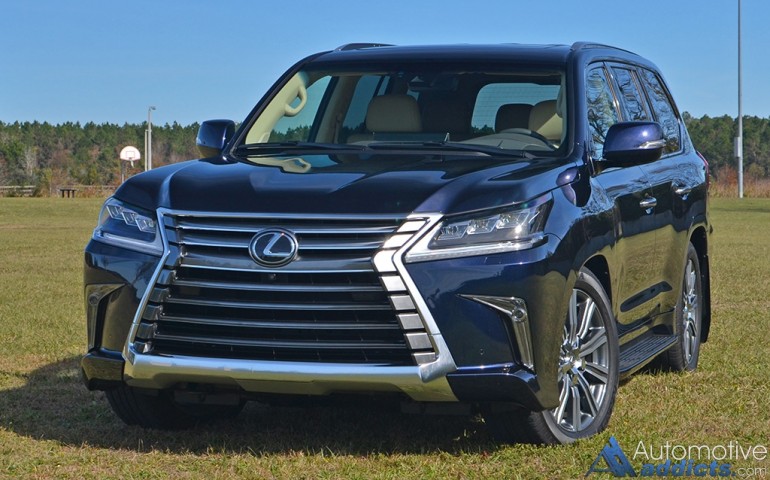 For many decades, Toyota has been at the forefront for a select number of loyalists sparking interest in a luxurious large body-on-frame SUVs found in the delicious selections bestowed in their prized and Land Cruiser and latest Lexus LX 570. Embarking on the new signature designs of the Lexus brand, the LX 570 receives a redesign for the 2016 model year carrying into 2017 unchanged from the makeover. 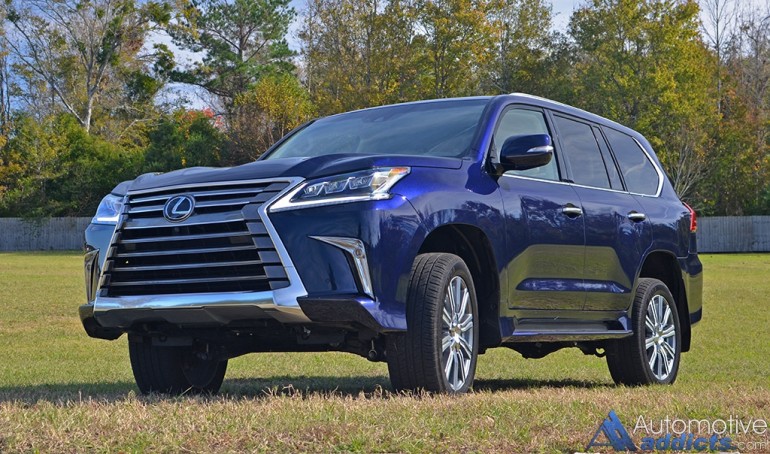 Exhibiting unique characteristics that can only be found in a large proportioned body-on-frame SUV, Lexus does a rare thing in the new LX 570. What you get in the new LX is a plush and comfortable cabin lavish enough for the most discerning luxury-vehicle seeker, yet underneath Lexus combines a rugged chassis and off-road-capable mechanics that have long been a part of the Toyota Land Cruiser’s formula. With that, the Lexus LX 570 has a 5.7-liter V8 engine transmitting power through an 8-speed automatic transmission and a full-time all-wheel-drive system with a hill start assist system, crawl control, and a driver-selectable multi-terrain system.

While the Lexus LX 570 isn’t going to win many races from the stop light, its proven drivetrain and go-anywhere attitude found in its robust mechanics, satisfy the adventurous and appeases those who choose to keep the Land Cruiser-based Lexus on pavement. Doing just that, the LX 570 has a commendable ride quality for such a large SUV. In its mammoth proportioned size, the LX 570 scoots along quite well getting up to 60 mph in 7.2 seconds. Even though the LX 570 is far from being sporty, even in the Sport or Sport S+ drive mode that firms up the adaptive dampers and aggressively adapts the shift points, it doesn’t slouch around. The brakes are strong, even overly boosted at times that catch you and any of the other seven passengers off guard. The four piston calipers and two piston rears do their job to bit down hard bringing the LX 570 to a stop from 70 mph in 183 feet, which is four and five feet better than its competing Cadillac Escalade and Benz outgoing 2016 GL-Class, respectfully. 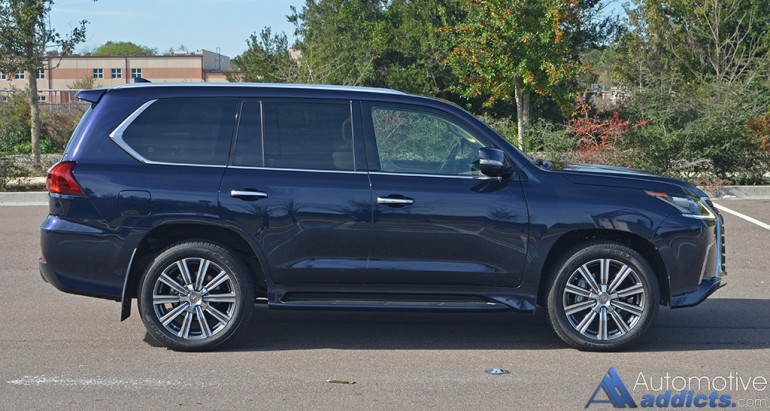 The drive has an overall assuredness with the exception of taking sharp turns. It is at those times that the LX 570 shows its heft, which tips the scale at an astonishing 6,206 pounds. Keeping sudden movements to a minimum is aided from what seems to be a rather heavy weighted power steering rack, one that some may find to be a bit too much even in the default Comfort drive mode. More than likely, Lexus intentionally made the steering effort heavy – after all, there’s only so much that the stability control and roll-over sensing airbags can do upon sudden steering inputs at speed. 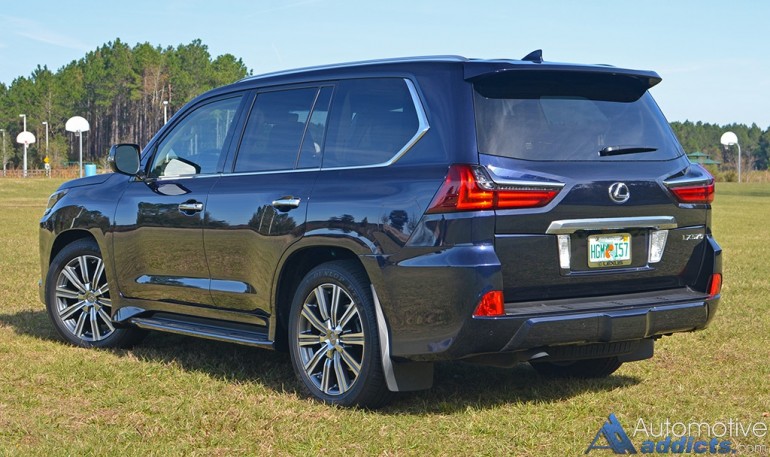 The Lexus LX 570 comes as one trim with all of the goodies, with the exception of a few add-on features, such as a DVD entertainment system to keep rear passengers happy as they explore roads less traveled in luxurious high-riding style. Speaking of passengers, the cabin of the new LX 570 is plush, almost too plush to think that the LX has proven off-road capabilities that keep up with the competition. The front and middle row seating have climate controlled seats with the right amount of bolster support for such a vehicle. The middle row has a power slide feature, but the folding method remains to be a bit cumbersome as it requires physically maneuvering the seat through a spring-assisted fold mechanism. Out back, the third row is a bit disappointing as it looks to have the potential to fit three adults but you quickly find out seating two is the desirable choice. Another caveat of the third-row is it cannot be completely folded out of the way on the floor when you want to store items in the cargo area. Instead, the third-row does a power-folding act out to both sides of the vehicle. Here, the seats remain somewhat in the way. With all seats in their folded positions, you have just over 83 cubic feet to work with. Otherwise, there is 9.1 cubic feet behind the third-row. 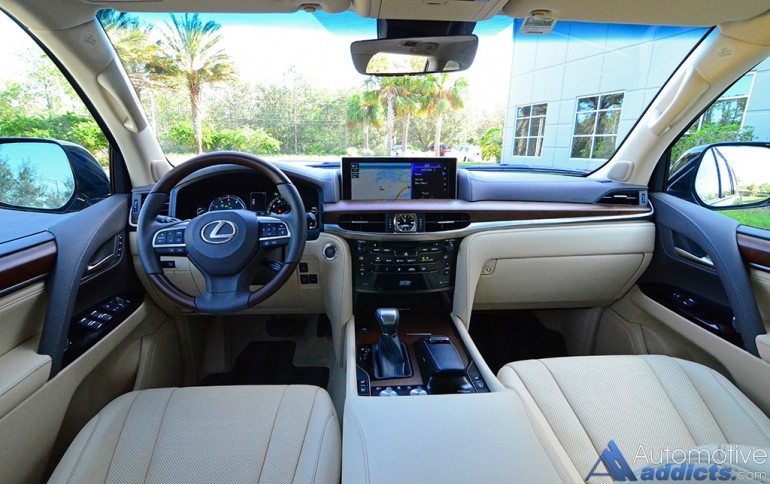 Making up for the side-folding third-row seats is the ease of accessibility in the LX 570. The rear cargo liftgate has a lower quarter gate the can be dropped down much like a pickup truck. Closing the gate only requires lifting a few pounds with the assistance of a pneumatic lift. The upper lift gate is powered and can be closed automatically. The tall stature of the LX 570 is also easy to access by the way of the clever air suspension system that can automatically lower upon parking and shutting off the vehicle. The air suspension not only allows for easier entry and exit but it keeps the body level and at the proper height depending on normal road driving or getting extra clearance for off-road excursions. 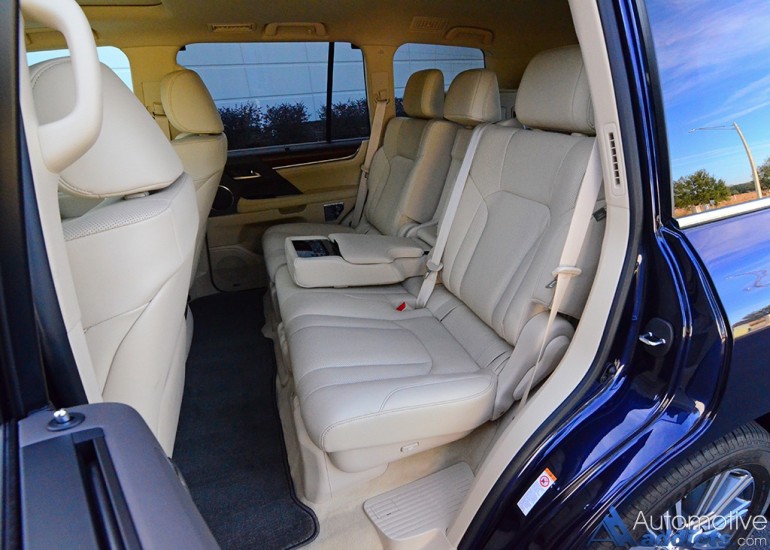 As a love/hate tradition, the LX 570 uses the familiar infotainment system that you find in other new Lexus vehicles using the remote touch controller. In my assessment of the latest iteration of the infotainment system, it can be your best friend at times or your worst enemy. Some may enjoy using the controller as somewhat of a mouse and pointer to navigate the on-screen buttons and menus, which are neatly organized in a virtual home screen. One of the more desirable features of the system remains to be the massively wide 12.3-inch multimedia display. Conveniently, Lexus uses several physical buttons for control of the climate and a few key audio system controls. A Climate Concierge system, at the push of a button, is a way for Lexus to always keep the right interior temperature without the guessing work of raising and lowering the temperature setting. Essentially, use of the Climate Concierge only requires that you set a desirable temp no matter the drastically changing outdoor conditions or the requirement to cool or heat the entire cabin upon entering the vehicle. 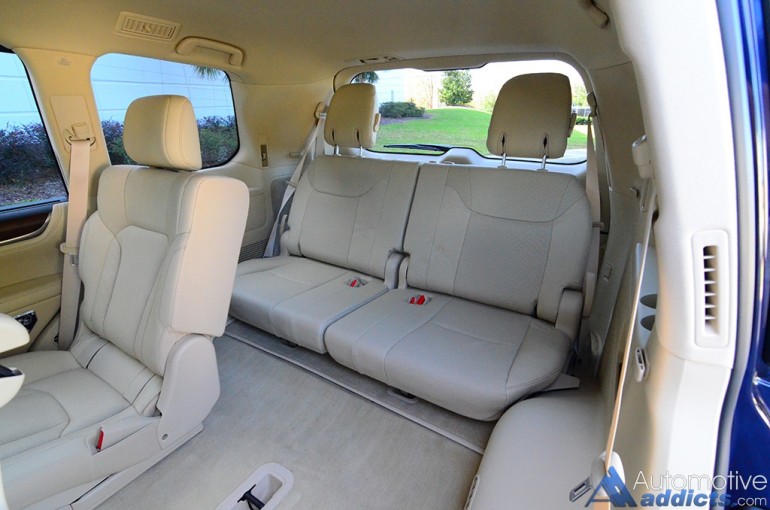 Safety is at the top of the list of most automotive manufacturers and Lexus is no exception to the rule when it comes to their largest road vehicle ever produced. The LX 570 comes with a bevy of active and passive safety features, such as the notable forward collision warning and autonomous braking, lane departure warning, blind spot monitors, remarkably bright and auto high-beam LED headlights, and an extremely useful 360-degree surround-view camera system for parking. 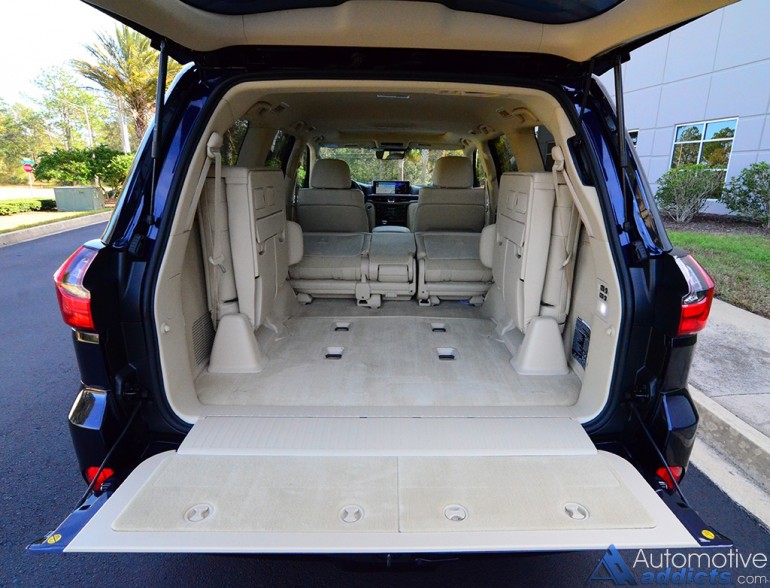 The Lexus LX 570 is a thirsty vehicle, as you could probably imagine due to its sheer size. The V8, while producing less than 400 horsepower, still has the duties of toting around over 6,000 pounds. Doing such requires copious amounts of premium fuel from its 24.6-gallon tank. The EPA estimated mileage sits at a dismal 13 mpg city, 18 mpg highway, and 15 mpg combined. Those are pretty much the figures you will expect to get in real world driving conditions. Things will only get worse from there if you ever expect to tow up to the LX 570’s 7,000-pound limit. However, at a price of $96,905 for my LX 570 test vehicle, who’s really paying attention to the price of gas? You still get a cruising range of up to 442 miles. 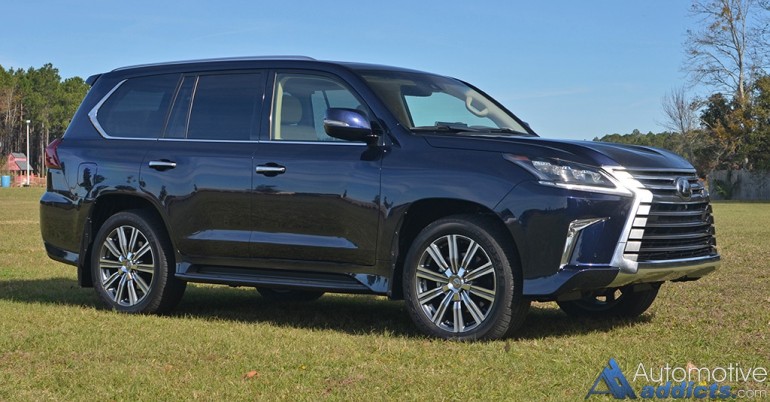 In the full scope of traditionalists who specifically seek the LX 570, buyers of the LX 570 are in small numbers but they come back asking for more with every update of Lexus’ biggest creature. In all that it offers, the Lexus LX 570 is a beast dressed in a futuristic-looking tuxedo that casually goes to the gym and knows how to survive in the wilderness. Fundamentally, the LX 570 isn’t trying to be something else other than a vehicle to appease its loyalists the best way it knows how. The same customers who bought a Lexus LX a few years back will be looking to “renew” their membership, and I totally get why after spending a couple weeks with the new Lexus LX 570.