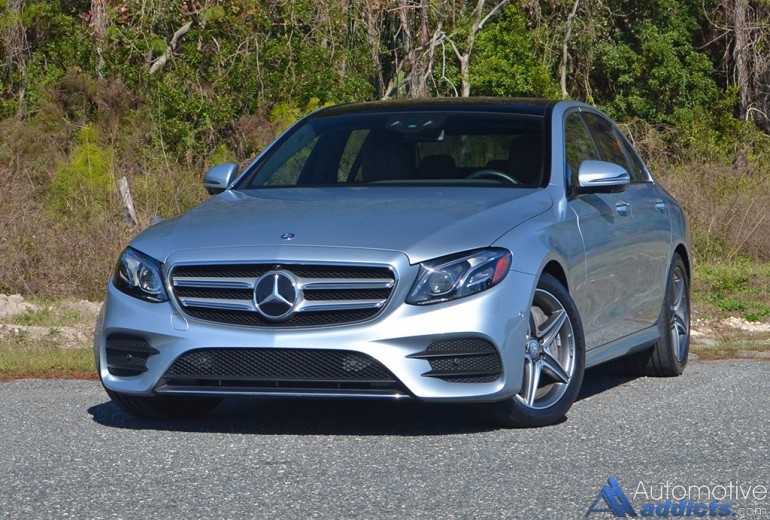 The evolution of the automobile has had its fair share of inroads when you have enthusiasts who yearn for V8-powered monsters. On the flip side, there are those who seek the best fuel efficiency numbers in hopes to go green and save a little green in the pocket. While I have concluded many times as of late with the evidence of us living in a new automotive golden age, manufacturers like Mercedes-Benz continue to offer something for just about everyone. In that spectrum, Benz has introduced a redesigned E-Class, a stately benchmark for a segment that has recently given away its triumphant sales numbers to new crossover vehicle creations.

While the midsized sedan segment appears to be slowly dwindling down due to record breaking SUV and crossover sales, Mercedes-Benz has brought forth their best efforts to win over luxury seekers once again for the redesigned 2017 E-Class. 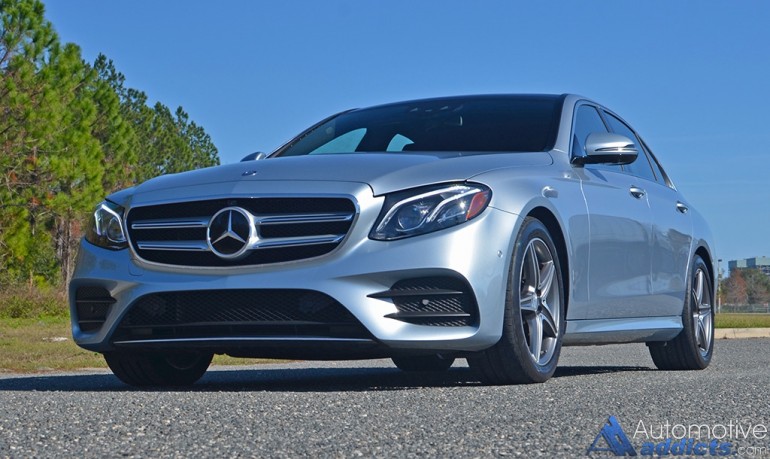 My latest excursion in the midsized luxury segment brings a new 2017 Mercedes-Benz E300 4MATIC into my garage featuring many of the German automaker’s forward-thinking features and amenities. The new 2017 E300 embodies the baseline for the E-Class, which is fundamentally at the basis for the brand apart from the volume-selling C-Class. Building off of the new design language instilled from other new Benz vehicles, the new E-Class gets the proper treatment with somewhat of a smooth-lined face and soft edges throughout the sleek aluminum bodywork. As one of their bread and butter cars, the E300 attempts to fulfill all of the desires of the most discerning through high-tech gadgetry and several engineering surprises where the E300 uses a turbocharged 4-cylinder instead of the past’s expected V6 or even V8 powermill. 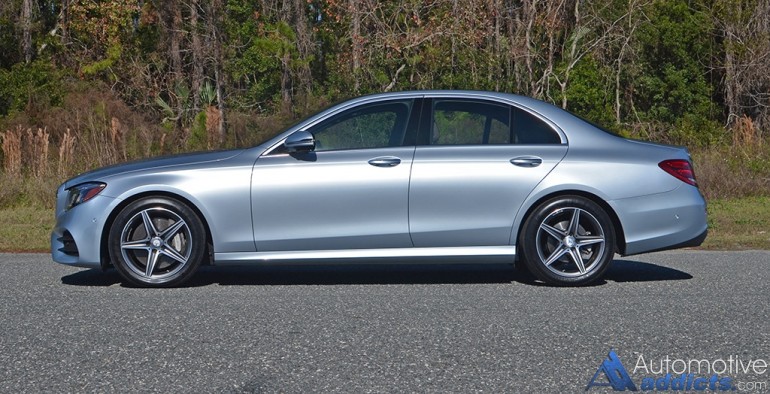 Not to get convoluted in the engineering details with disappointing figures in having a 4-cylinder engine, but, Mercedes’ choice to use a turbo 4-cylinder in the E300 is not a bad one. You see, my time with the E300 I was expected to be let down – only I wasn’t, I was surprised time after time in the consistent power delivery from the E300’s 2.0-liter turbocharged engine with its 241 horsepower at 5,500 rpm and 273 lb-ft of torque that peaks as low as 1,300 rpm. To make things even more interesting is the turbo-four gets mated to a new 9-speed automatic transmission, further improving upon its overall ability to dispel the negative power-lapse connotations of 4-cylinder engines. 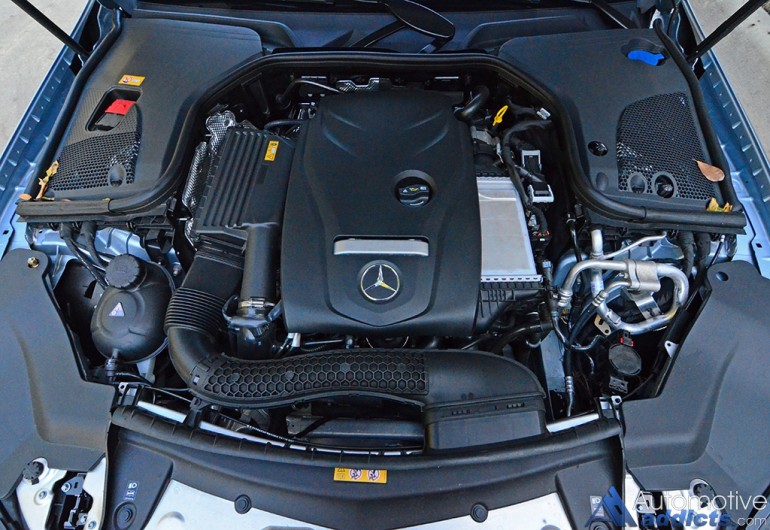 Driving the new E300 is quite relaxing and enjoyable no matter your style of driving. While the appeal of the power output is nothing thrilling, it is, however, mostly consistent and steady. Getting up to 60 mph requires 6.8 seconds, and the overall stability is excellent, thanks to remarkably advanced continually adaptive dampers and the air suspension system, which comes as a $1,900 option. The drive modes, a total of five (Eco, Comfort, Sport, Sport+, Individual), have mostly subtle changes but adapt well to your choice. As such, the air suspension system lowers the body of the vehicle in Sport+ model while tightening up the dampers. Otherwise, in any other mode, the suspension system will automatically lower at Interstate speeds for better stability and lower drag resistance. The disappointing part of the suspension system remained to be the unsettling body motions when going over road heaves while in Comfort mode. The air springs and dampers appeared to allow an extra float and bobbing of the body in some conditions, possibly to smooth out the ride but ended up being more conducive of getting a mild case of being car sick. Luckily, Sport+ mode or using the Individual mode to customize the Sport+ suspension setting apart from driving dynamics rectified the almost wet sponge-like ride quality. 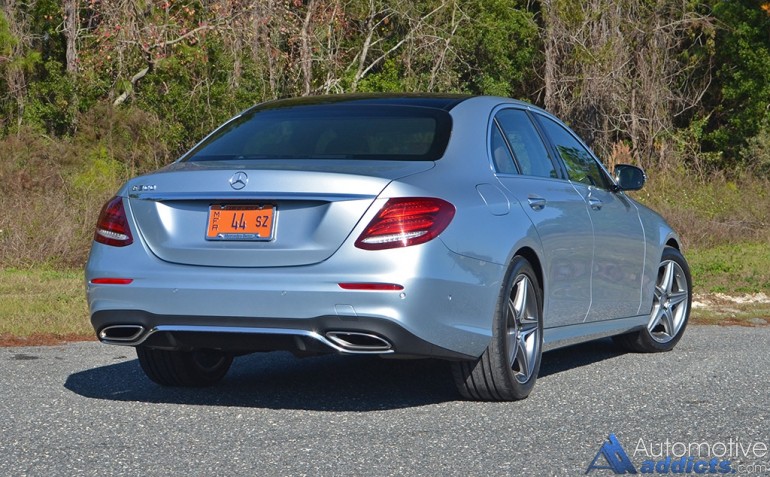 Getting into the thick of things, the new E300 isn’t much of a sports sedan. In fact, when placed in Sport+ mode the vehicle may come to life with advanced throttle mapping and more direct shifts but pales in comparison to competitors like the BMW 528i. In Sport+ mode, the shifts from the 9-speed automatic try too hard and end up with lumpy shifts that upset the balance of the vehicle somewhat upon full throttle acceleration. One thing I did notice is that stability and traction control was nicely programed to step in softly in Sport and Sport+ drive modes. Upsetting any of the four wheels with the sure-footed 4MATIC all-wheel-drive system was nearly an impossible feat. Braking was good as was the E300 4MATIC’s ability to scoot along into traffic. Even the sound from the turbo 4-cylinder didn’t sound like what you expect from such a small engine, there was more of a muted growl instead of a buzz, which is a good thing considering the luxury class expected from Mercedes-Benz E-Class vehicles, no matter how small the unmatched-displacement nomenclature is nowadays. 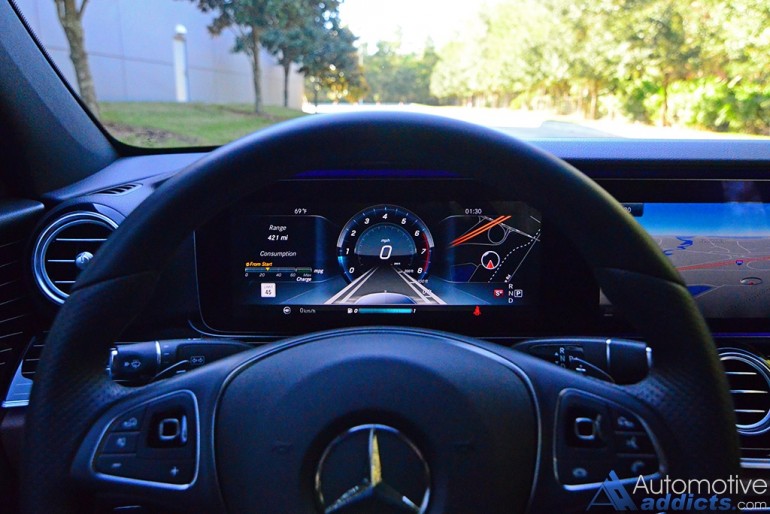 Efficiency, as expected in the choice of the powertrain, is good for the new E300 rear-wheel-drive to land an EPA-estimated 22 mpg city and 30 mpg highway. My loaded-up E300 4MATIC test vehicle gets 1 mpg less on the highway than the rear-wheel-drive variant. The EPA figures were easily attainable during my drive in the E300 4MATIC.

The E300 mostly mimics its larger S-Class sibling – sans the pricier and larger interior volume numbers. The E-Class takes up a clever use of its interior to exude a welcoming cabin, one that is lavishly appointed with the glam associated with its lofty nearly-loaded as-tested price at $76K. Luxury appointments are abounding and easily noticeable as you enter into the E300’s interior. The climate controlled and massaging front seats on my loaded-up E300 4MATIC test vehicle are quite suited for the E-Class with the right amount of bolster support and ample adjustability. 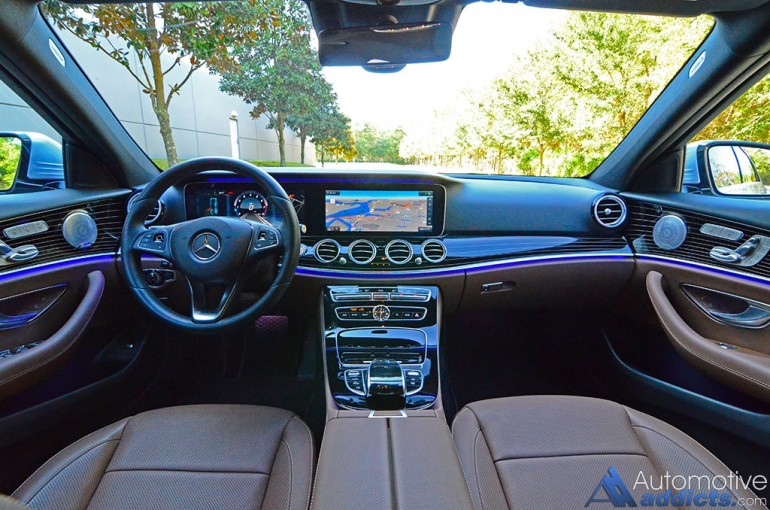 The inviting cabin of the E300 with its bright-but-soft customizable ambient LED lighting, an abundance of soft-touch surfaces, and lavishly stitched leather seats and trim, all culminate a supple interior worth the price of admission. To add to the value perspective, the E300 makes a full array of semi-autonomous driver assistance features, which also act as active safety features, where the E-Class can nearly pilot itself on clearly marked local roads and highways. Overall interior space is decent and mostly surprising when you glance at the overall exterior dimensions, which otherwise appears to be on the small size, initially. In a nutshell, some may have a hard time differentiating the new Benz C-Class to that of the new E-Class, which can be a good thing when you consider how the new Benz design language translates into the basis of all new models. 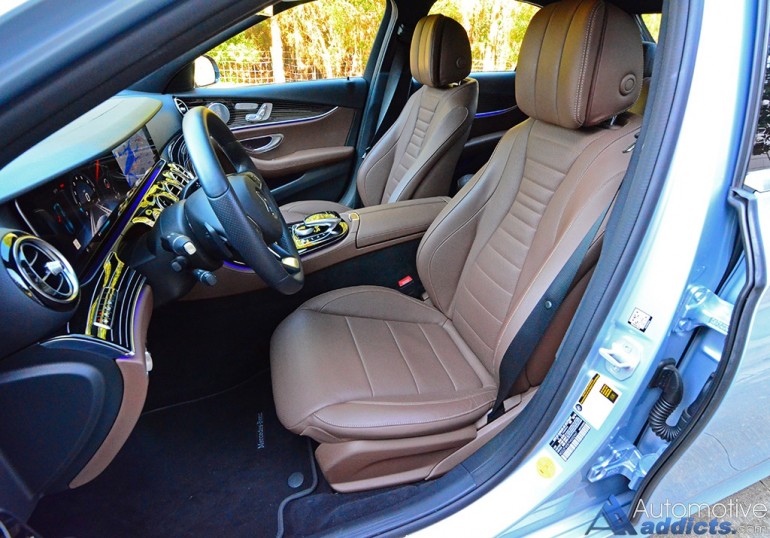 The new updated COMAND infotainment system is a welcomed change from the traditional setup. The system, however, still requires somewhat of a learning curve. Once you figure out what direction of the touchpad to swipe, what the physical buttons do, and what click-commands control what, the system later becomes rewarding. The better part of the new infotainment system, in addition to the driver’s gauge cluster, is the use of two 12.3-inch widescreen displays. The new E-Class incorporates Android Auto, Apple CarPlay, HD radio, two USB port connections, a Wi-Fi hotspot, real-time traffic on the navigation mapping, voice control, and the familiar touchpad controller. There is also a continued use of a select number of physical buttons for the climate control and bringing up core functions. 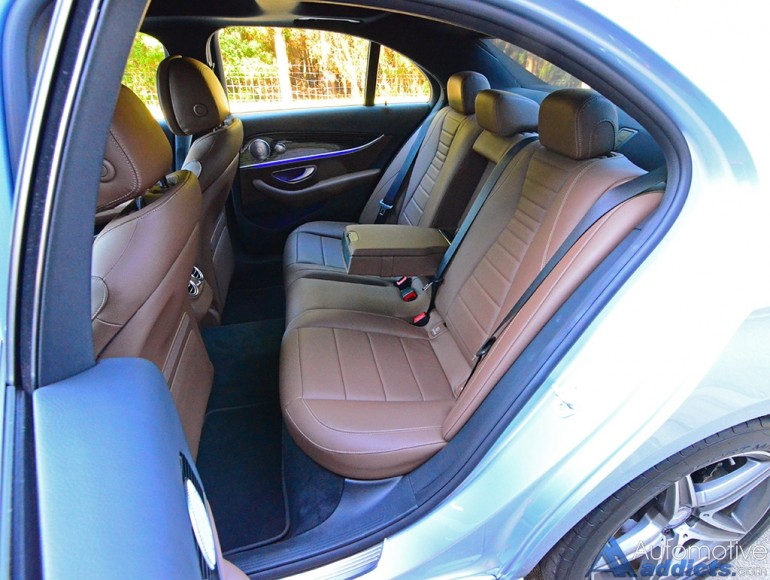 Currently, the introduction of the redesigned Mercedes-Benz E-Class is limited to the E300 model, which will later be followed up by other engine choices in forthcoming trim levels, coupes, convertibles, and AMG models. 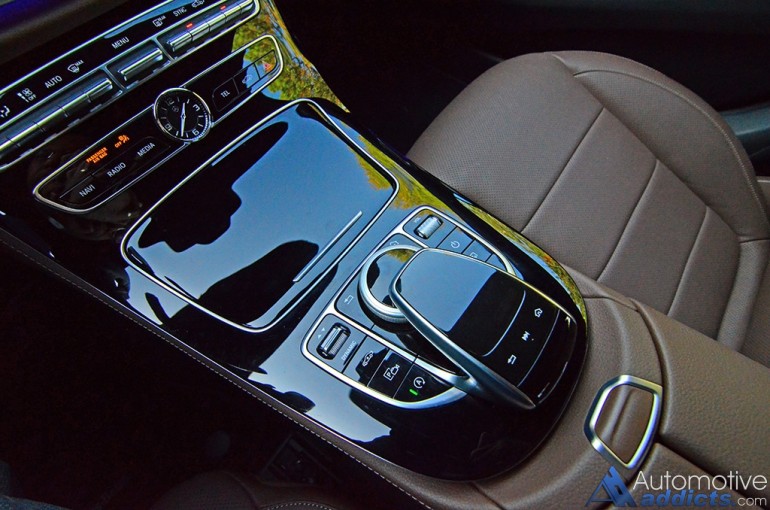 At the base price of $53,075, the new 2017 Mercedes-Benz E300 is quite attractive. However, at my test vehicle’s nearly-loaded price tag of $76,155, things get hard to swallow, and you start to wonder if the turbo 4-cylinder-powered E300 4MATIC’s high level of class is enough to warrant the cost. While there are many options to consider, the new E300 has certainly attempted to redefine midsized luxury, but on the outside there isn’t much to scream that you paid $76K. After-all, the E300 is not a sports sedan or an S-Class – it’s nestled itself in a place somewhere in the middle that may get lost in translation for some. Possibly, other forthcoming E-Class trims will better translate their worth. I can’t wait!