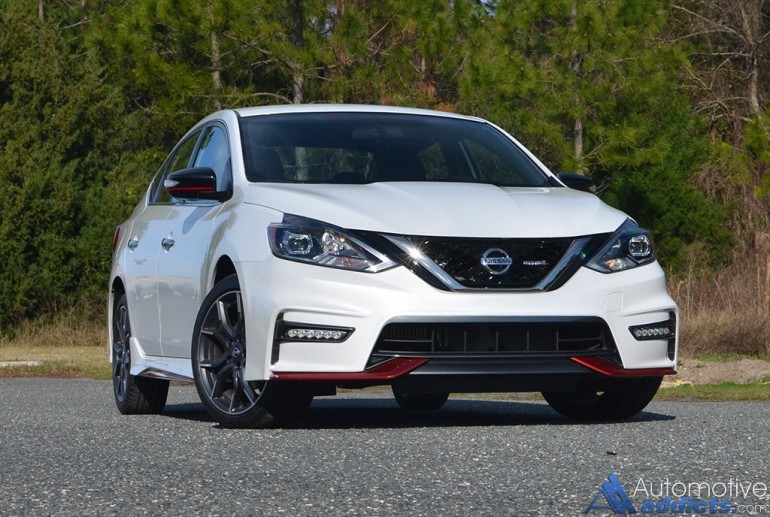 Nissan has always had a steady hand in offering a rather basic and economical form of transportation in the Sentra. Marking its seventh generation and receiving a facelift for the 2016 model year, the Nissan Sentra carries on with being somewhat primitive yet effective for serving the sole purpose of reliable and cost-saving transportation. With that, the higher powers that be at Nissan thrilled us with a tease of a NISMO variation of the Sentra in concept form and a turbocharged engine that had well over 200 horsepower. Unfortunately, when it came time for production, the new 2017 Nissan Sentra NISMO proves to be somewhat of a letdown making due with the Turbocharged trim level’s 188 horsepower and 177 lb-ft of torque 1.6-liter turbocharged inline-4-cylinder engine. However, the new for 2017 Sentra NISMO embodies a small dose a sporty style and favorability over other base trim levels of Nissan’s economical compact sedan. 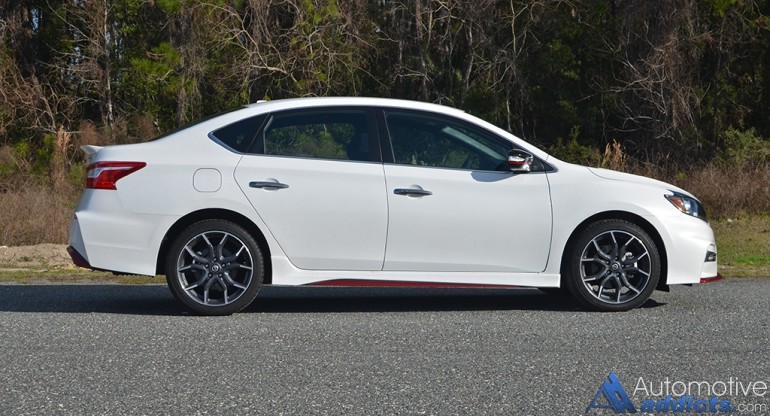 The Nissan Sentra was hardly ever on the radar screen for hardcore enthusiasts with the one exception of the early 2000’s SE-R Spec V-trimmed Sentra. I can remember the days of lining up my Toyota Celica GTS 6-speed against the Nissan Sentra SE-R Spec V hoping that my additional 5 horsepower over its 175-horsepower engine borrowed from the base Altima would suffice in a drag race. It was a valiant effort from Nissan to offer enthusiasts something special, complete with sporty seats, manual transmission, and larger wheels. In comes nearly 17 years later and Nissan brings us the NISMO version of the Sentra, what is in my opinion somewhat of a letdown to take advantage of today’s technology and thirst for additional horsepower found in one-off performance variations of sporty compacts. 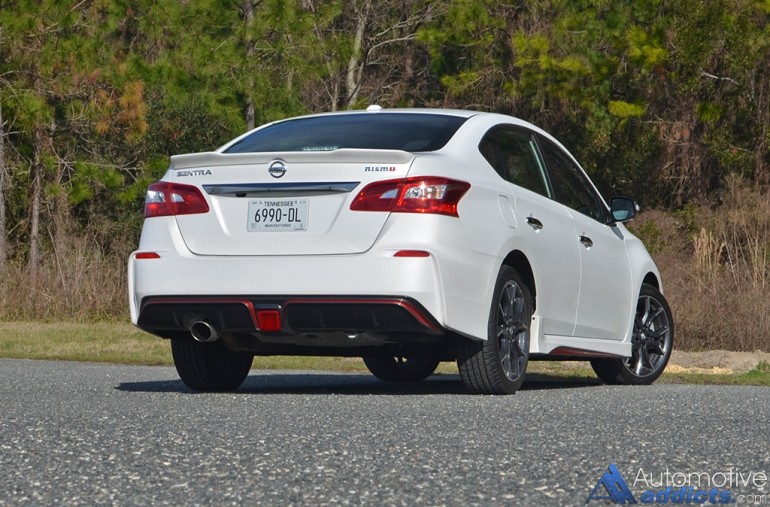 In saying the new 2017 Nissan Sentra NISMO is a letdown, I don’t mean it in a completely literal sense, more along the lines of failing to live up to today’s expected hype carrying the badging of Nissan’s performance outfit. Not to mention, NISMO pays tribute to what is found on their GT-R supercar, capable of dashing to 60 mph in well under 3 seconds and scoring records at the Nurburgring. Now, with the 2017 Nissan Sentra NISMO, such a feat to 60 mph is going to take you just over 7 seconds (7.4), the best time I could conjure after several attempts in the dense cool morning air. If you have been paying attention to the evolution of the Sentra, that’s about a half a second slower than the last performance-oriented Sentra, the SE-R Spec V from 2010, which had 200 horsepower. 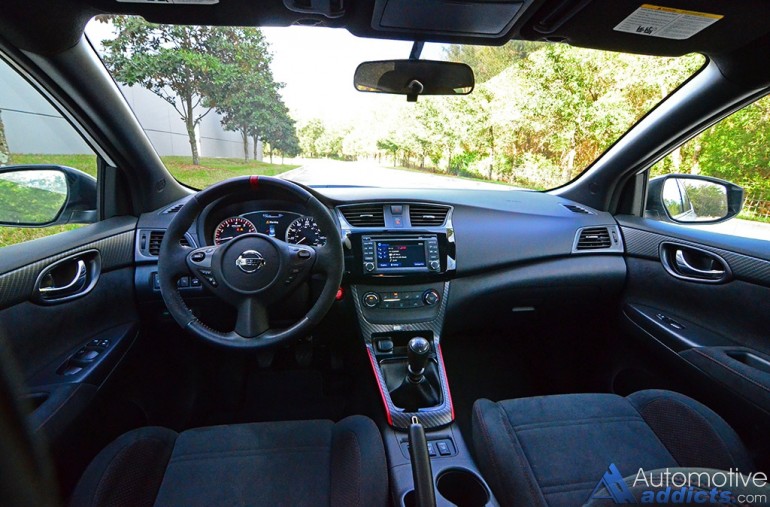 Not all is doom and gloom with the 2017 Nissan Sentra NISMO. Riding off of the premises of the Nissan Juke NISMO fitted with the same front-wheel-drive powertrain, the Sentra NISMO features similar highly bolstered heated cloth seats up front, the same steering wheel with microsuede inserts, and the offering of a standard 6-speed manual transmission. The collective of those parts alone, in addition to the sport-tuned suspension, 18-inch wheels, LED daytime running lights, LED low-beam headlights, the Sentra NISMO appears to be a well-to-do sport compact ready to tear up the nightly Fast and Furious streets- or at least attract a wider audience to what would otherwise be stuck with a lackluster transportation appliance with only 124 horsepower in the base Sentra trims. In having driven the base Sentra with the CVT transmission, I assume that the optional CVT (Continuous Variable Transmission) for the Sentra NISMO would further diminish its sports appeal versus having the 6-speed manual for a more direct feel and in control feel. Kudos to Nissan for keeping the manual alive.

The fuel mileage of the Nissan Sentra is already decent. The Sentra NISMO doesn’t deviate far from the fuel consumption numbers of the SR Turbo trim but slightly lower than the less powerful base model trims getting an EPA estimated 25 mpg city and 31 mpg highway with the 6-speed manual transmission. 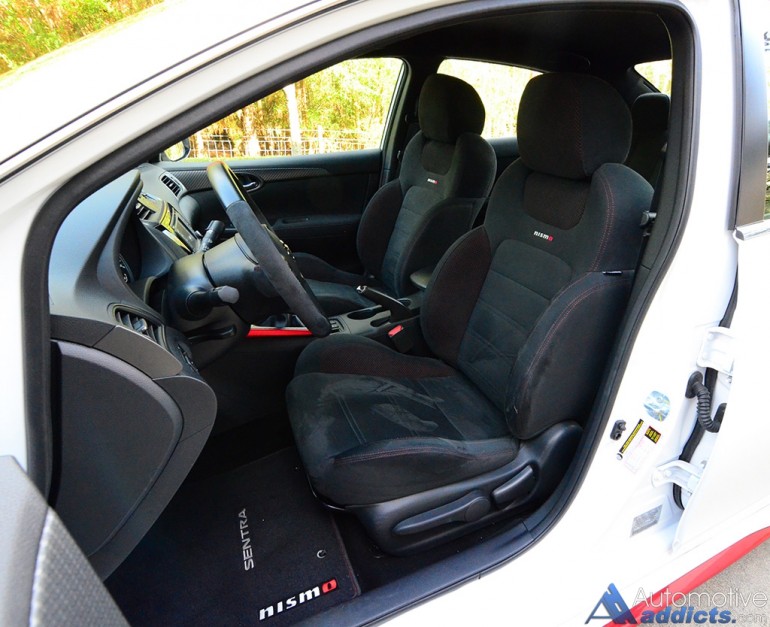 One of the welcomed aspects of the Sentra NISMO over the other trim levels is its sport-tuned suspension system. For enthusiasts, the suspension is nicely dialed in. However, the ride quality can be a bit bouncy at times but proves to be surprisingly forgiving when going over bumps at speed. Moreover, the crisp handling of the Sentra NISMO adds to the sporting abilities where it could easily handle much more power fed to the front wheels. The turbocharged engine does all it can to keep things somewhat entertaining at the hands of the 6-speed manual transmission in my test vehicle. The shifts aren’t all that rewarding as each gear feels the same as all others with no anticipation of additional power through the RPMs. Fundamentally, the engine doesn’t have any defined sweet spot or range that you want to run the gears through. Moreover, quickly rowing gears isn’t any better than shifting smoothly as both seem to muddle the 3,000-pound Sentra NISMO through the streets. To sum up the drivability of the new Nissan Sentra NISMO, it’s a decent vehicle to pilot on the confines of local streets instead of highways or Interstates. Anything above 55 mph and you’re asking to get embarrassed by another performance-injected econobox when you attempt to overtake them. In all, the Nissan Sentra NISMO is almost a back-to-basics car that Nissan wanted to abuse their use of lipstick privileges but forgetting to upgrade the engine. 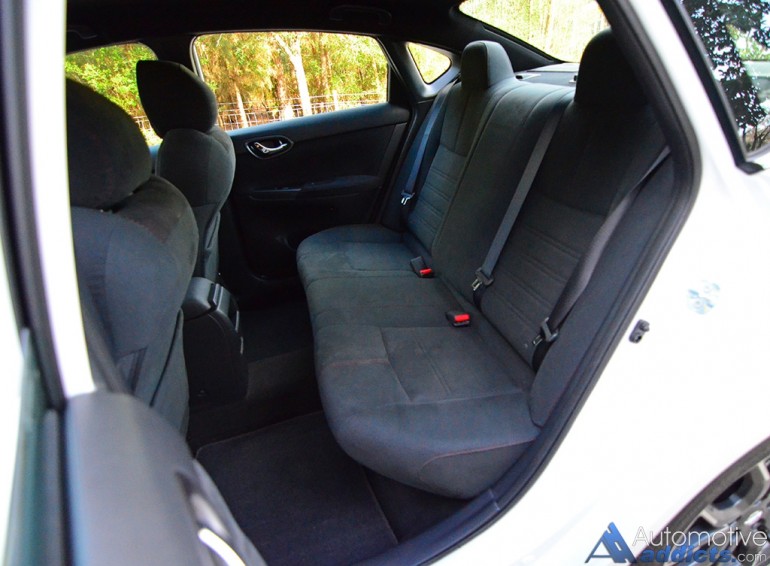 I really wish there was much more to the Sentra NISMO so it could proudly wear its badging and sporty looks. After all, it is the best looking Sentra and the only way I would dress up a Sentra if I had to live with it. There’s an unseen potential in its stable chassis and sporty looks. Sadly, the Sentra NISMO borrows its powertrain from the SR Turbo trim without any power output changes and still carries a curb weight of just over 3,000 pounds. To add insult to injury, there isn’t much tech offered on the new Sentra NISMO outside of a decent 5.8-inch touchscreen infotainment system with navigation, backup camera, Bluetooth connectivity, and a BOSE audio system. Otherwise, there’s a lack for optioning any active safety tech. 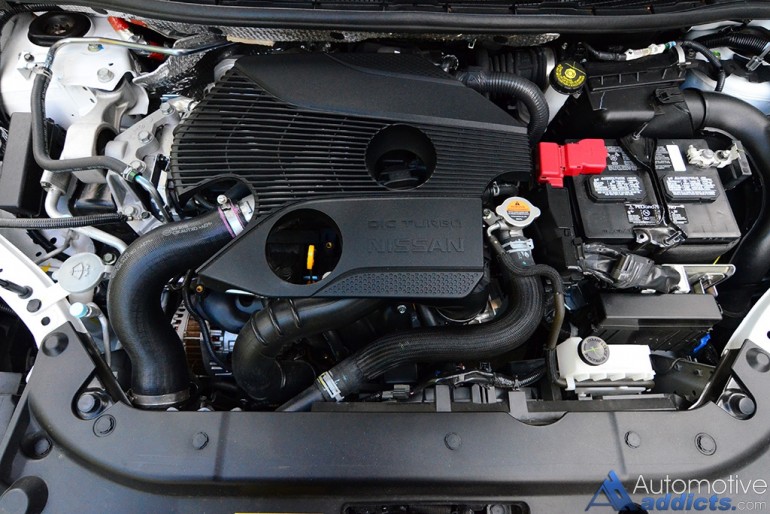 In full disclosure, in my opinion, the Nissan Sentra NISMO looks the part to get the job done and does just that for light-hearted enthusiasts. Where the Sentra NISMO misses the boat is that there are too many other offerings and forthcoming vehicles in the compact segment that offer much more power, thrill, and technology for nearly the same price as my test vehicle at $27,370, which includes a destination charge of $865, an extra-cost Aspen White exterior paint job, and the NISMO Premium Package (larger touchscreen infotainment with navigation). In conclusion, the new 2017 Nissan Sentra NISMO is a much better selection over other base trims but falls just short of being spectacular when pitted against the competition, with the exception of vehicles like the Toyota Corolla, which has yet to offer anything comparable to the Sentra NISMO.