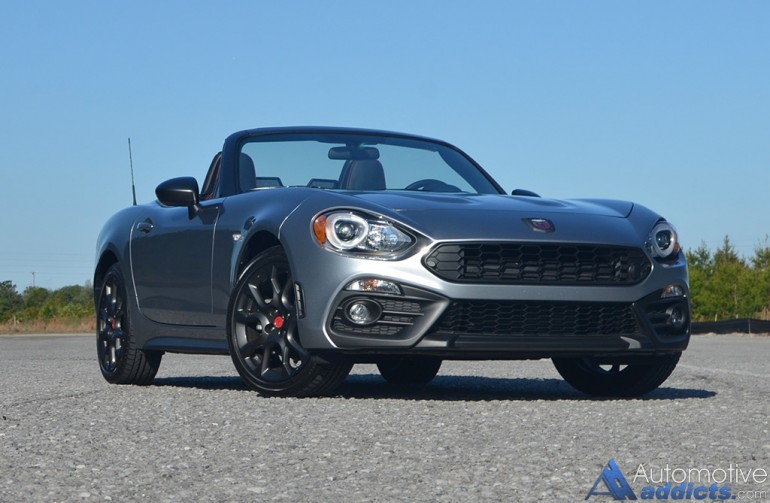 Fiat has proven to bring a classic Italian brand to our side of the pond for those who want something different wrapped up in a stylish but small package. Expanding on the brand’s presence in the states and overseas is the idea to take the chassis of the famous Mazda MX-5 Miata and Italianiz as much as you can with a turbocharged inline-4-cylinder engine, unique sheet metal, and a top-end Abarth model. 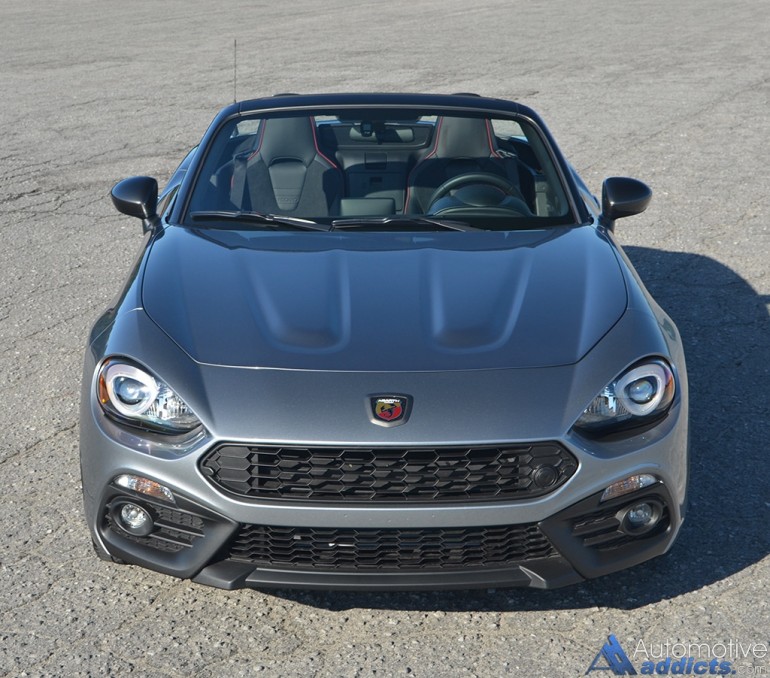 Built in Japan alongside the Mazda Miata, the Fiat 124 Spider, or aptly called by some enthusiasts as the “Fiata,” proudly wears its badge on top of the sleek and somewhat elongated bodywork that’s all exclusive to the 124 Spider. The bulging fenders, enlarged headlights encasing projector beams, and LED taillights all put the Fiat in its own right to somewhat depart from all that we know about the Miata. 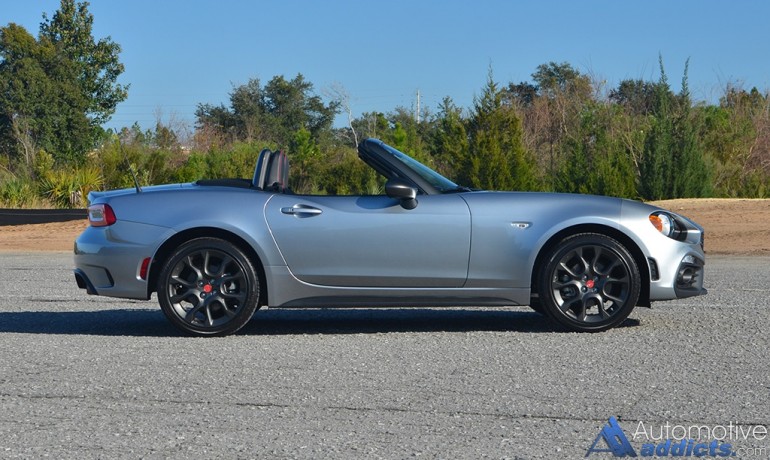 Taking a page directly out of the Fiat 500 Abarth is the 1.4-liter Turbocharged MultiAir 4-cylinder engine with 164 horsepower and 184 lb-ft of torque. Power is sent to the rear wheels through either a standard 6-speed manual transmission or a 6-speed automatic unit, which is a $1,350 option. 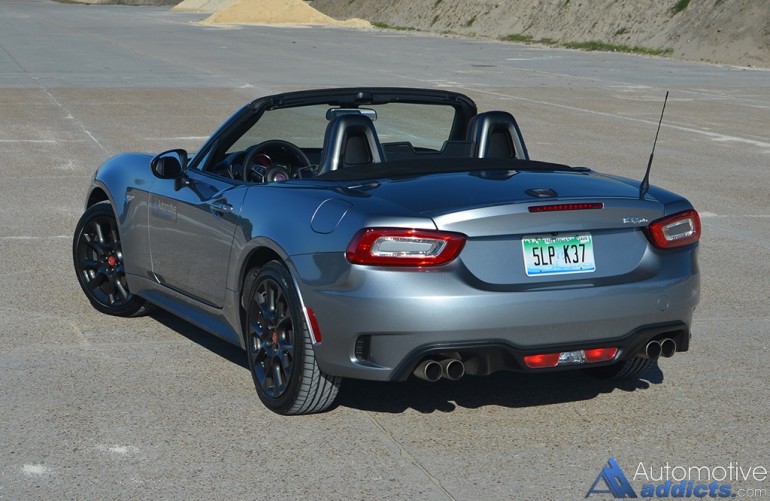 The engine, a depart from the Miata’s naturally-aspirated 4-cylinder wonder, is also a wonder in its own way with a slightly different edge on power delivery. The fuel efficiency of the 124 Spider Abarth is almost just as good as the Miata, getting about 35 mpg on the highway and an estimated 25 mpg in the city, which is only 1 mpg less than the Miata on the highway and 2 mpg less in the city. 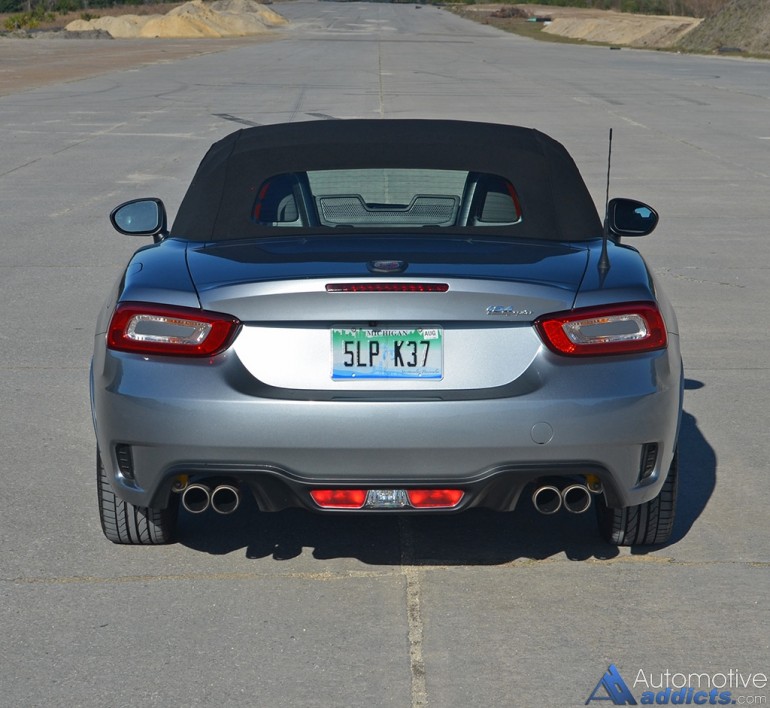 The Fiat 124 Spider Abarth, with only four more horsepower than the standard and much quieter 124 Spider base model, handles itself rather well and sounds much meaner than the Miata. In all, the low-end torque just after the slight lag at 2,000 rpm, scoots the 124 Abarth along with enthusiasm. What my take away from the 124 Spider Abarth with the optional automatic transmission was it proved to be a bit lazier than the Miata, though, it handled much better in turns. While I don’t think the 124 Abarth was any faster in a straight line, it appears to have the better dancing shoes but lacking the initial response when the music starts. Still, the 124 Abarth turns heads a bit more than the Miata, mostly due to its Italian style. Regardless of comparing it directly to its not-so-distant Miata “friend,” the 124 Spider Abarth is a joy to toss around, and you can have a lot of fun with stability and traction control turned off, thanks to a limited slip differential out back, which is also available on the Miata but in the mid-level Club trim. 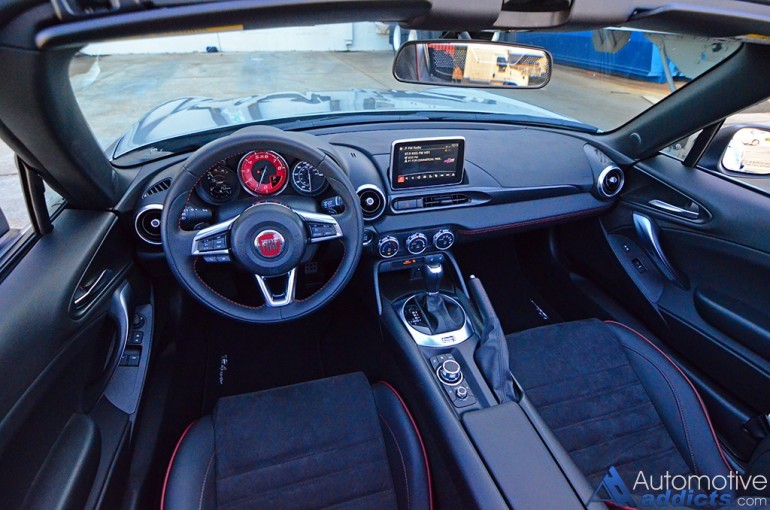 FCA’s recognition to have a broad range of vehicles under one brand but still nail the purpose of each vehicle pays its merit in what the Fiat 124 Spider Abarth signifies. Paying homage to the classic 124 Roadster from the late 60’s and well into the 70’s, brings back a passion that many enthusiasts wouldn’t mind experiencing stateside. That passion, although somewhat borrowed from the most popular autocross roadster around, lives on with enthusiasm. Some of those enthusiastic traits carry through a quad exhaust that proves to be attention-seeking, a higher level of competency in the suspension tuning, and 17-inch wheels and tires. The steering is sharp but not as edgy as what I have noticed in the Miata. The connection of the driver to the road seems a bit off from the Miata. However, my time in the 124 Spider Abarth appeared to be somewhat sapped by the automatic transmission. Though, the 6-speed automatic was mostly direct and cleverly limited use of the higher gears as to keep the turbocharged engine in a sweeter spot to reduce lag or bog, which is a good thing in my opinion for those who don’t mind burning a bit more fuel. 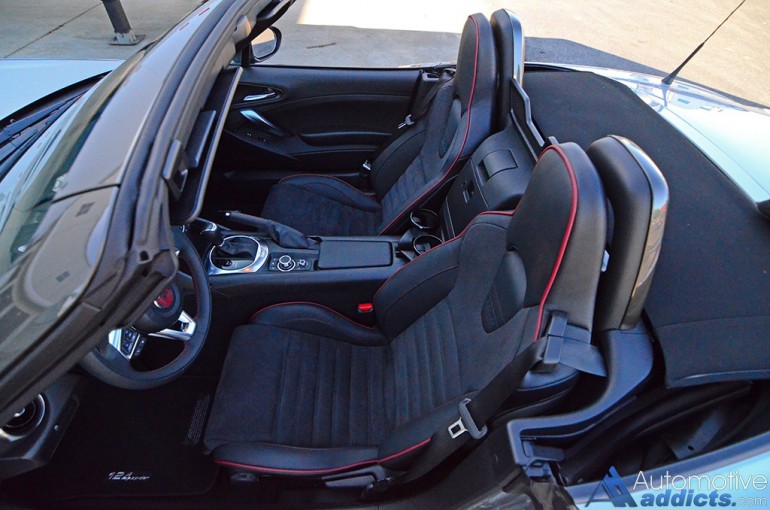 The roadster duties of the Fiat 124 Spider Abarth thrive just as much as they do in the Miata. Manually opening the top is a breeze to quickly lower at your discretion, just as you do in the Miata. The feature content is on par for its price range, as is the trim and limited amount of soft touch areas of the dashboard. The automatic climate control, automatic rain-sensing wipers, automatic headlights, 17-inch wheels, fog lights, and nicely bolstered and heated leather-trimmed Recaro seats with Alcantara inserts all complete the package for a well-done roadster. There are content packages for 124 Spider Abarth, which add even more to attract enthusiasts with LED headlights, Brembo performance brakes, nine-speaker Bose audio, blind spot monitor w/rear cross-traffic alert, parking sensors, and a navigation system added to the standard infotainment screen. In all, the starting price of the 124 Spider Abarth is not far off from the Miata starting at $28,195. My test vehicle, which includes a couple of options, such as the Alcantara Leather Recaro seats and 6-speed automatic transmission, brings the total to $31,735 including a $995 destination charge. Not bad for an Italian roadster!