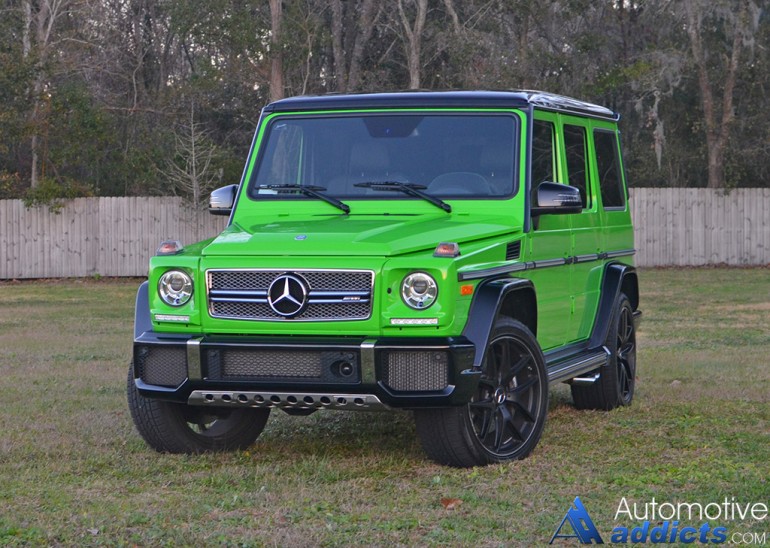 As it turns out, when you live in excess you tend to gain unwanted attention from others, both inside and outside of your circle of friends, acquaintances, and those with inquiring minds. When it comes to your mode of transportation, those who live at the upper echelon of the income scale tend to sometimes afford themselves the indulgence of being obnoxious. Sometimes it’s having the latest and loudest Harley Davidson motorcycle, a ridiculously loud muscle car, a captivating supercar in the most outrageous color you can find, or the Mercedes-Benz G-Wagon (“Geländewagen” in German meaning “cross country vehicle”). In my latest test drive, I had the privilege of roaming my local streets in the newest Mercedes-AMG G65, the infamous G-Wagon on steroids, a vehicle fitting for an NBA player or someone fresh out of the NFL draft that’s itching to spend their signing bonus. 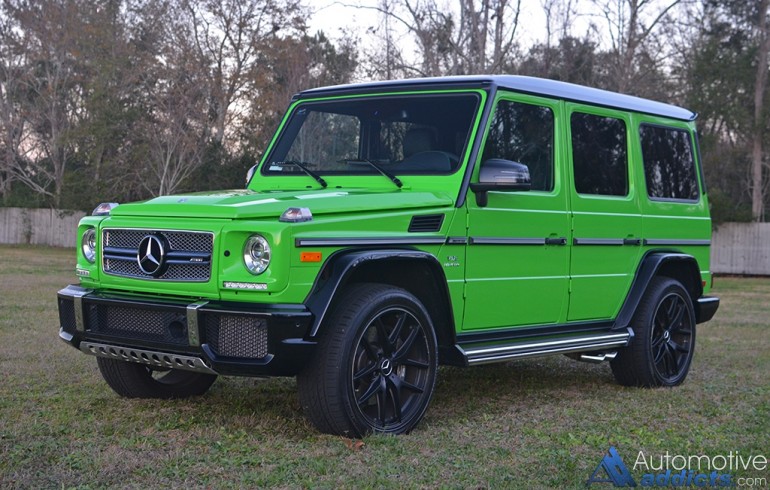 The new Mercedes-AMG G65 is a lone wolf, one that demands attention in many ways. In an SUV class of its own, the G65 embodies a long tradition of the G-Wagon from Benz, which pays homage to nearly 40 years of history of a boxy body-on-frame off-roading icon. Through the years not much has changed where the typical onlooker would be hard pressed to guess the year of a modern-day G-Wagon from Benz. It’s a classic no matter the model year. 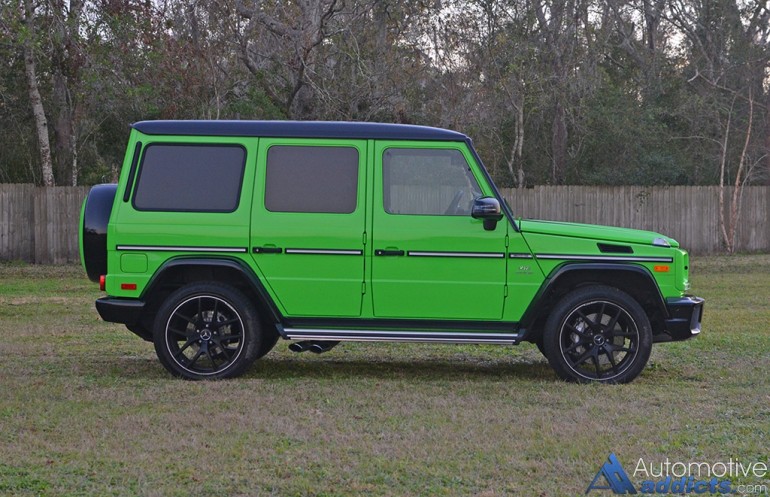 Keeping with tradition, the latest iteration of the G-Wagon retains much of its rugged build quality and exclusive boxy design. Most of the details are classic, even the way the doors latch with old school hinges – an antiquated design that requires you to slam each door for a proper closing where the sound mimics that of distant gunfire. Even the power locks clatter much like the sound of a pump-action shotgun. The rear hatch door is like opening a bank vault, probably just as heavy, which you will need to afford the price of my G65 test vehicle at $236,325. By now you get the theme here, right? Just about everything on the G-Wagon is ridiculously overbuilt, including the BiTurbo V12 engine in my G65 test vehicle. The V12, sourced from other “65” variations of Mercedes-AMG vehicles, is a thrasher with 621 horsepower and 738 lb-ft of torque. The G65 has enough grunt to wonder why you can’t tow over the stated 7,000-pound towing capacity. Something tells me no one is going to even bother towing anything other than Gucci handbags and lap dogs in the back seat. 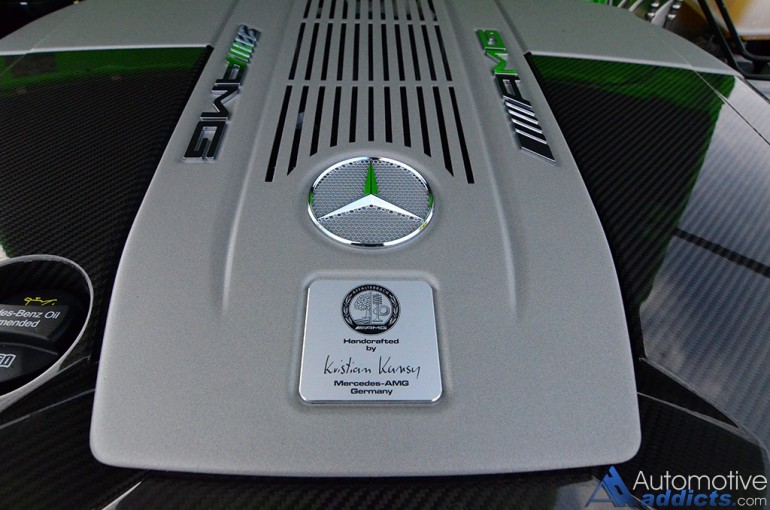 The latest BiTurbo V12 engine powers all four wheels through the German automaker’s proven 7-speed automatic transmission. The traditional use of multiple settings for the differential locks, three in total (front axle, rear axle, both), may be a bit misleading in the G65 as it is dressed with 21-inch wheels and tires only good for trekking on the streets of Rodeo Drive using the tightly spaced interior for your shopping bags. The driver’s seat isn’t exactly ideal for long legs as you are forced to sit tall and upright in somewhat of a tight spot. The rear seats are also short on room, except headroom, obviously. In all, the G65’s interior is small, much smaller than its high-statured boxy design would indicate. I’m also reminded that the G65 will probably never see a day off-road. Let’s not kid ourselves; the G65 is one of the most outlandish rolling statements on American roads today, but somehow, I like it, because it’s such a rarity that undoubtedly turns heads. 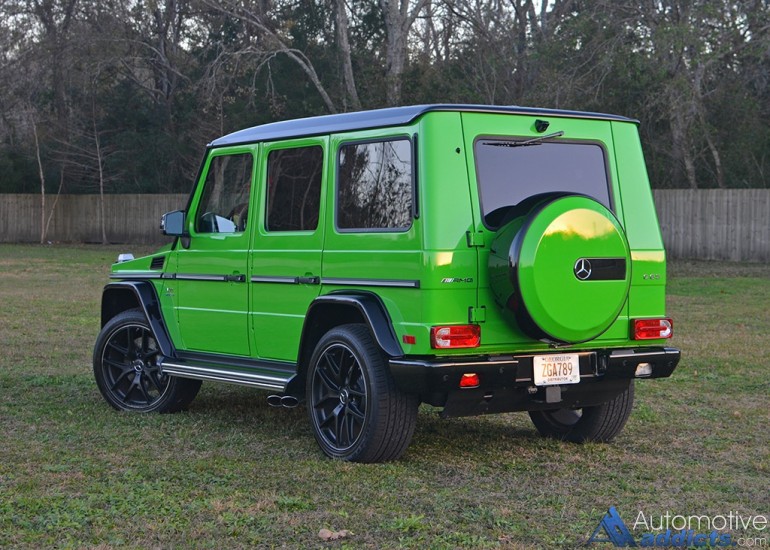 Driving the G65 is mostly a feat that should only be done with your undivided attention. The steering is heavy and lazy, and can often drift with an abundance of slack, sloppiness, and a centered dead-spot. While the power is ample and nearly earth-moving from the twin-charged V12 engine, there is a sense that you don’t want to push the G65 over the posted legal speed limits as your sometimes reminded that you are piloting a German tank designed for the road with quilted leather seats tipping the scale at 5,600 pounds. Fundamentally, the G65 is the most powerful vehicle that you never wanted to drive fast.

Driving a “German tank” comes at an additional price over its $236K admission, one you will pay dearly at the gas pump because the big BiTurbo V12 is thirsty and you’re driving a drag-inducing box. I managed to match the EPA fuel economy estimates of 11 mpg city and 13 mpg highway getting about 12 mpg on average. While the mpg figures are dismal, among the worst I have ever experienced in an SUV, they are at best consistent. No matter what I did, I mostly stayed within the range of the EPA estimates, which afforded several trips to the gas station to fill the 25.4-gallon tank full of premium unleaded. 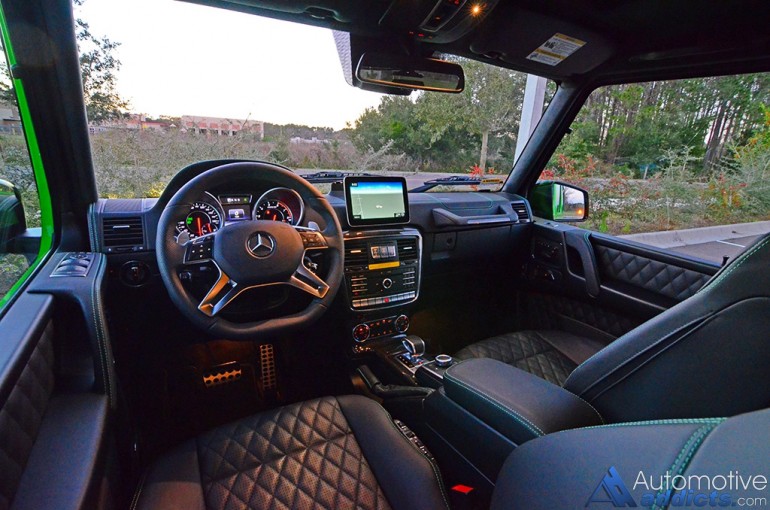 All is not doom and gloom when it comes to what the G65 has to offer. However, when properly equipped with the right tires, the G65 is more than capable of pounding gritty surfaces and roads less traveled in unique style. Still, Mercedes-AMG isn’t all concerned with their classic G-Wagon paving new paths; it’s for those who are inclined to give the world a big middle finger from the hand wearing a $25K watch when they don’t get their way. Sure, there are starving children in the world, but a G65 driver unapologetically makes in a day what most middle-class Americans make in a whole year. Put that in your G65’s side-mounted quad exhaust pipes and smoke it! 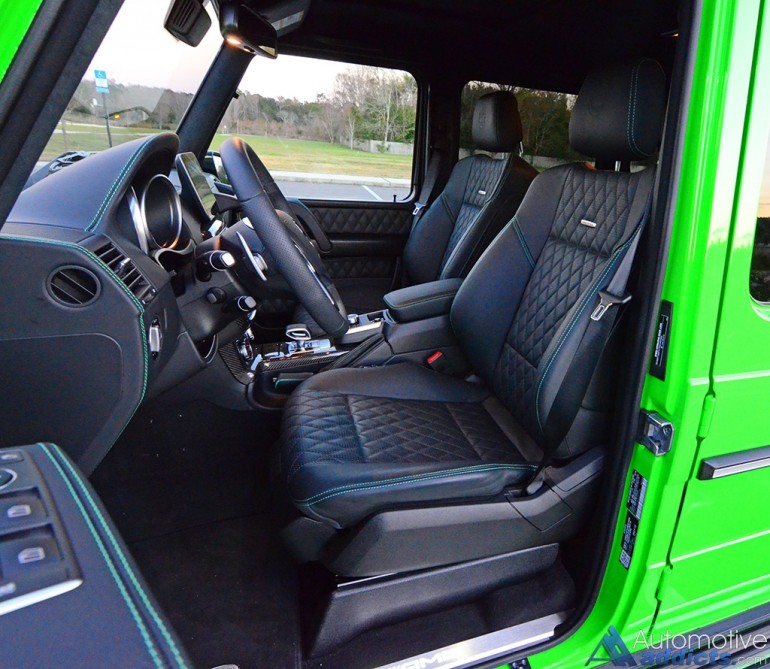 One of the more surprising elements of the G65 that I took way during my week long escapade is the fact that it rides decently. The ride quality, something that I was not expecting, was overall compliant and stable. Even though the suspension is tuned more to the firm side, the G65 conducts itself well on the highway. I will say it again, you don’t want to approach triple digit speeds or take turns sharp turns too fast. The G65 will be happy to introduce you to a very upset insurance agent if you desire to treat it anything like a sports car. Body roll shows itself soon enough as does the wavering off-center heavy-weighted steering, which requires several turns to maneuver in parking lots. While there is a backup camera and parking sensors, backing into spots remains to be an uncertain task as the rear-hatch-mounted and massively-sized spare tire completely misconstrue your depth perception when displayed on the tablet-like floating 7-inch infotainment screen. Speaking of screens, technology in the G65 has taken a back seat for the most part where there aren’t many creature comforts or tech features that you would expect in a vehicle costing $236K. Moreover, you must still use your key fob to remote-unlock the G65 and insert the key to start the beastly V12 engine. Call me spoiled, but you can get push-button-start on a $20K Hyundai. 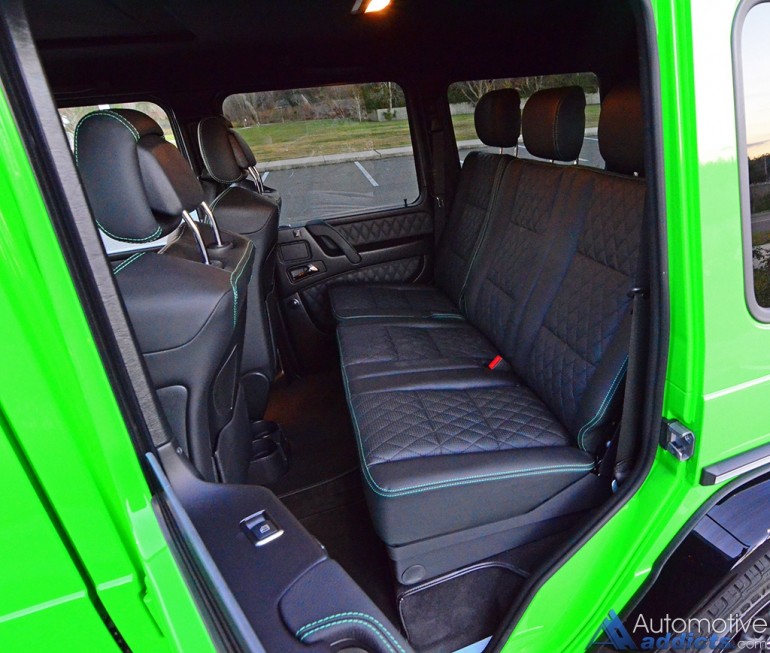 Mercedes-AMG isn’t fooling anyone with the G65. It’s one of those vehicles that you know exactly what you’re getting because you probably had one before. Let’s not kid anyone, either, about its steep price – the G65’s merit is reserved for those who live in excess and want that BiTurbo V12 badge on the side to tell everyone else that they have the best. They won’t care that the less-expensive and less-powerful BiTurbo V8-powered G63 is just as fast to 60 mph as the G65, which takes about 5.3 seconds. Those who want to flaunt it because they got it will do so by opting for the big V12 in the G65, and possibly get it in the obnoxious Alien Green exterior color of my test vehicle. I’m not mad at anyone who buy’s such a vehicle, all I ask is that when they see the world burning that they do not purposely add fuel to the fire.