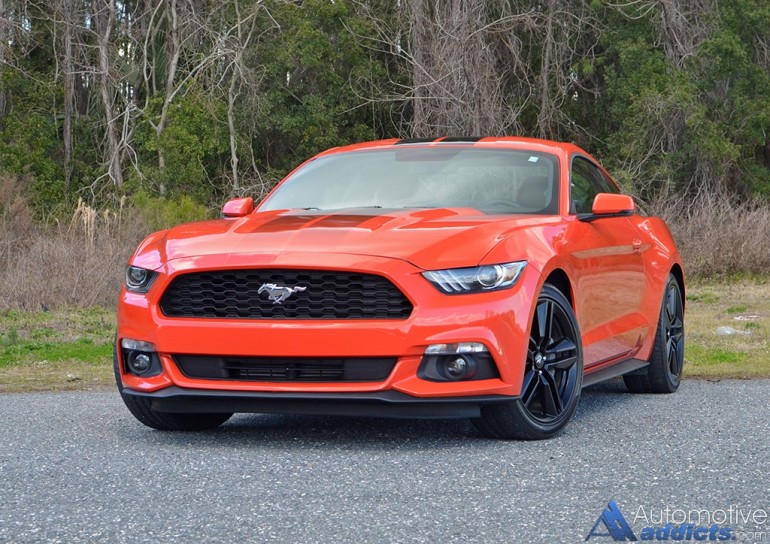 There isn’t much of a mystery surrounding American pony cars other than freshly-introduced high-performance variations. With that in mind, the latest Mustang for the 2017 model year carries over its tradition of being a major player in the scope of a mass-produced American pony car, or an affordable sports car if you will.

Having had an opportunity to drive countless Mustangs in the past, I have witnessed firsthand the progression of the famous pony car benefiting from the advancements of new-age technology and brute American muscle. The latest EcoBoost-powered Ford Mustang embodies many of the advanced tech principles starting with its turbocharged 2.3-liter 4-cylinder engine that produces a healthy 310 horsepower and 320 lb-ft of torque. 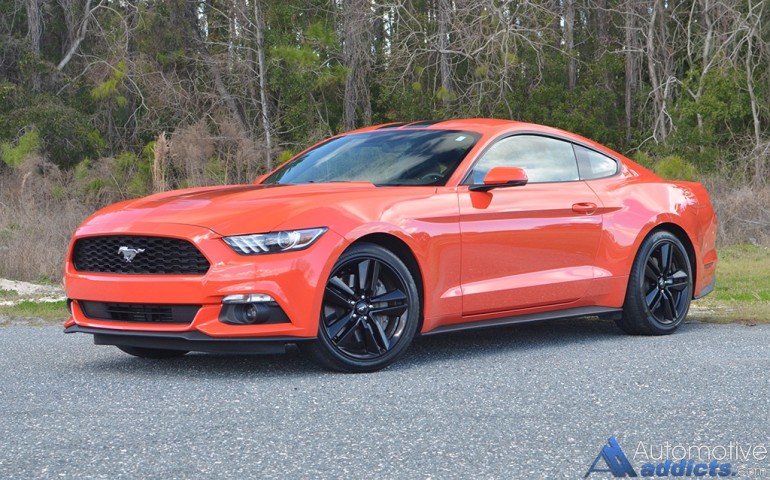 The new Mustang, riding off of its major redesign for the 2015 model year, takes advantage of its independent rear suspension, lightened body, and a welcomed stability wrapped up in a basic yet functional package. The primary collective of parts in the new Mustang are all that you expect from such a vehicle that starts life at the base EcoBoost trim level at a price of only $26,595 before any fees or add-ons. From there, Ford offers many options to equip your Mustang with items like blind spot monitors, adaptive cruise control, cooled/heated perforated leather seats up front, aluminum dashboard trim, and a plethora of attractive exterior colors. 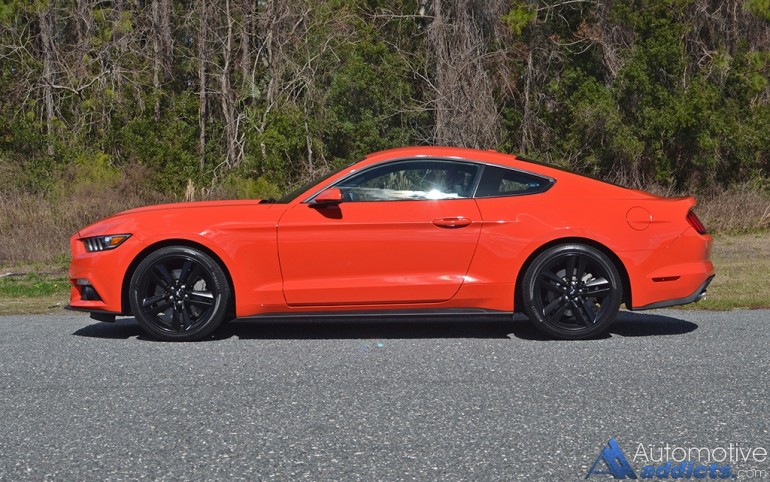 Performance from the base 2.3-liter EcoBoost engine, which will serve as the base engine when the V6 departs the lineup later this year, is respectable and at times surprising. My time in taking a quick spin in the 2017 Ford Mustang Coupe Premium EcoBoost was enjoyable as I could digest all of what Ford delivers with a loaded-up 4-cylinder Mustang. You shouldn’t let the 4-cylinder engine you, after-all, it’s packed with a nice punch that gets the job to 60 mph done in about 5.6 seconds. The Mustang Coupe EcoBoost does it with a comfortable ride quality, too. 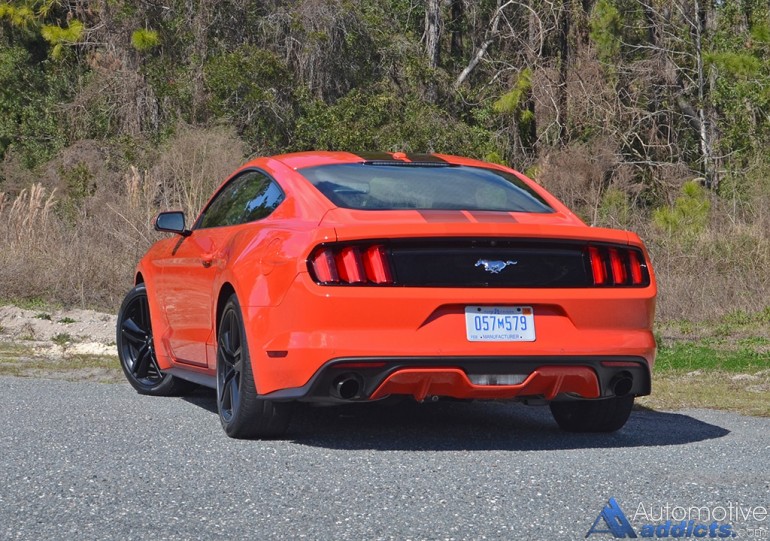 The power band is broad, among the broadest I have experienced in a turbocharged 4-cylinder engine. Moreover, equipping my test vehicle with the standard 6-speed manual transmission only adds to my delight as I get to row my own gears, which were mostly notchy but assuring in each landing of the six forward cogs. The clutch pedal was easy to become accustomed to while the steering was mostly numb and lacked much communication from the road, which is expected in many of today’s electric-assisted setups in vehicles with high-volume production numbers.

Ford has worked out many of the kinks that hindered older Mustangs with the new suspension setup. The Premium-trimmed EcoBoost 6-speed manual Mustang held its own quite well in most of its driving dynamics. In the turns, when pushed hard, the Mustang EcoBoost was mostly assuring. Though, at times the rear would break loose unexpectedly only to be caught a second later by stability control. Turning the driving nannies off, the 255/40 19-inch Pirelli P-Zero summer tires on all four corners did a respectable job of keeping the 3,532-pound pony in check. The rear wheels will break loose at full throttle at the slight transfer of weight out back. After all, it’s a Mustang, and you can easily get yourself in trouble if you’re not keen on piloting a 300-plus horsepower rear-wheel-drive car with just over 3,500 pounds to tote around. 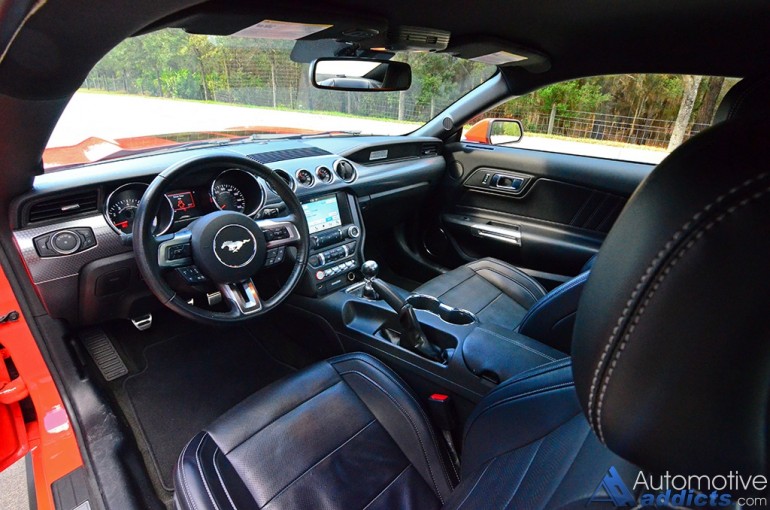 Fuel economy is pretty good from my experience in the EcoBoost Mustang. I saw an average of nearly 32 mpg on the highway and about 23 mpg going through back town roads with several stops. The EPA estimates for the Mustang Coupe EcoBoost 6-speed manual come in at 22 mpg city, 31 mpg highway, and 25 mpg combined – not bad for a 300-plus horsepower pony car. 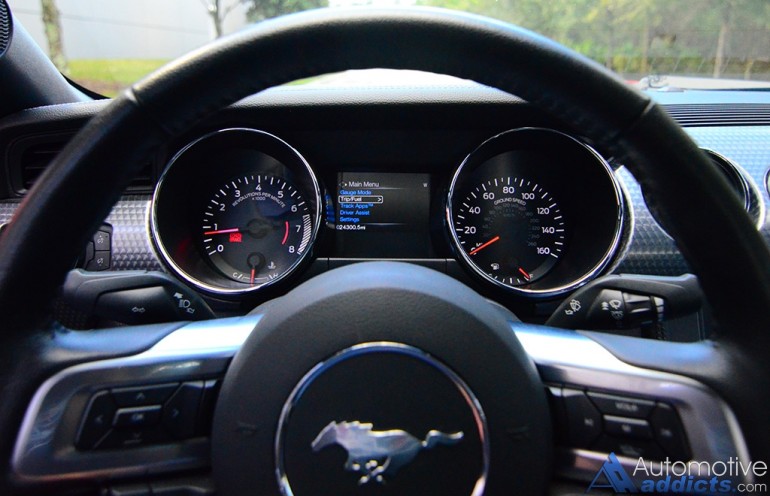 Ford’s due diligence in keeping the interior with the theme of the Mustang’s signature looks does away with some of the retro styling but tends to subtly add it back in to keep with tradition and living up to the Mustang nameplate. With that, there are several hard plastics throughout the cabin but just enough soft touch areas, including the dashboard and upper half of the door trim, to prevent the interior from being overly cheap. 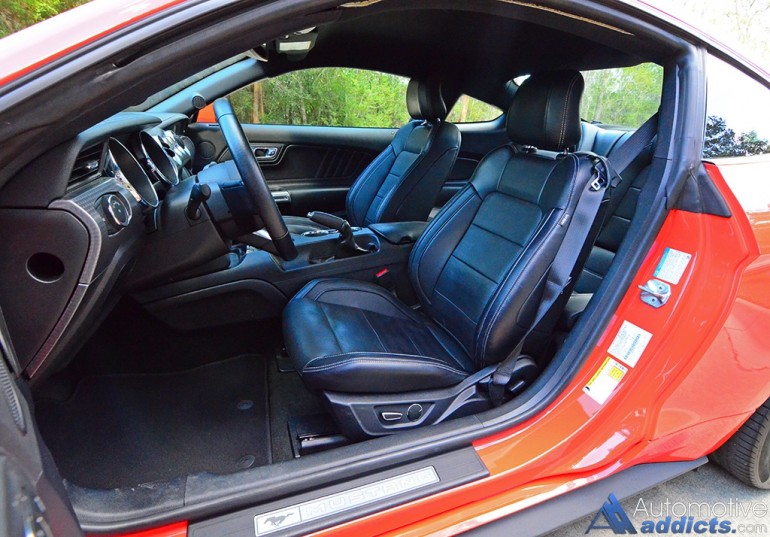 The controls throughout the cabin are all ideally placed, and the latest Ford Sync infotainment system is the best yet from the brand. The infotainment system, fed through a large 8-inch touch screen, is exceptionally quick to respond to your commands and all if the function icons and menu sets are user-friendly. The capacitive touch screen permits quick pinch-to-zoom and drag functions much like today’s smartphones and tablet devices. Long gone is the slow-to-respond system with smallish on-screen buttons. Moreover, there is the right amount of physical buttons for controlling the audio system and dual climate control system. Ford has turned over a new chapter with the new Sync system, which in my opinion is now among the best in the business.

One of the only issues with the Mustang’s interior, which continue to plague other vehicles in its class, it’s the smallish back seat area. Such is almost a given in the Mustang’s segment, which can be forgiven. 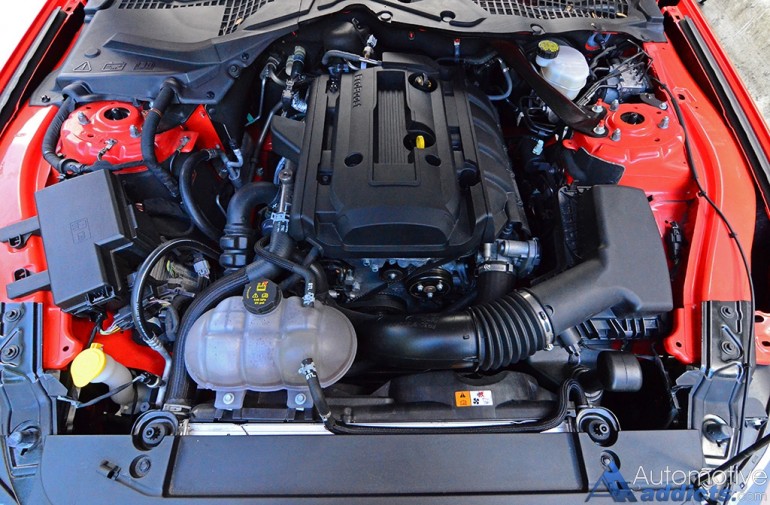 The Ford Mustang lives on to keep its place to stand proud against its competition and adding in an unsurpassed value perspective. In summary, the Ford Mustang still cannot be beaten in terms of stylish transportation in a 4-seater configuration with performance to back it up, even in the base engine choice. My loaded-up test vehicle, with the standard 6-speed manual transmission, comes to an as-tested price of $37,540, including a $900 destination and delivery charge.