2011 Maserati GranCabrio Previewed ahead of Frankfurt 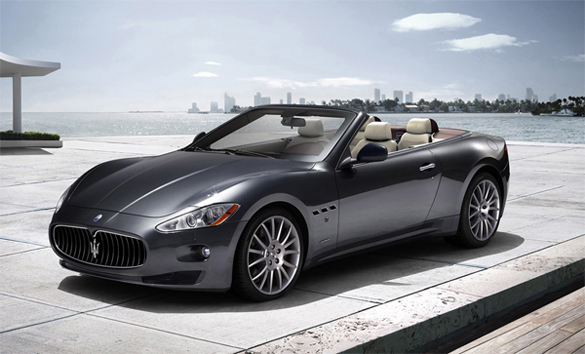 Sometimes I feel so out-of-place considering the fact that I do not like convertibles but yet many automotive manufacturers seem to be pumping out a plethora of these drop-top vehicles lately. I have to admit, there is a large enough following and group of convertible enthusiasts out there that the auto makers see enough profits even when their R&D departments have to dish out the extra cash to develop a convertible version their most popular model. But enough of what I think, here is a preview of the new 2011 Maserati GranCabrio shown ahead of the Frankfurt Auto Show.

Currently being revealed ahead of the Frankfurt Auto Show, is the topless Maserati GranCabrio that is, for the most part, unmistakable Pininfarina styling. Like any topless version of a sports or GT car, you want similar performance to that of a hard-top version of the car. You would be pleased to know that the GranCabrio does not let you down in this department. The Maserati GranCabrio will be fitted with a 434 horsepower 4.7-liter V8 taken from the Maserati GranTurismo S.

If you do not wish to go topless in the GranCabrio, then you can pull up the canvas top that pleasingly accents the traditional long wheelbase traditionally found in other Maseratis. Nonetheless, 4 adults get to enjoy fun in the new GranCabrio with the top up or down.

Look for a debut of the 2011 Maserati GranCabrio at the Frankfurt Auto Show next month. The 2011 Maserati GranCabrio will be priced from $130,000 in the US which will put it up against the BMW M6 Cabrio, Jaguar XKR Convertible, Aston Martin Vantage Roadster and even the Mercedes-Benz SL. You can order this gem starting winter of next year with a delivery date no sooner than the following spring season.