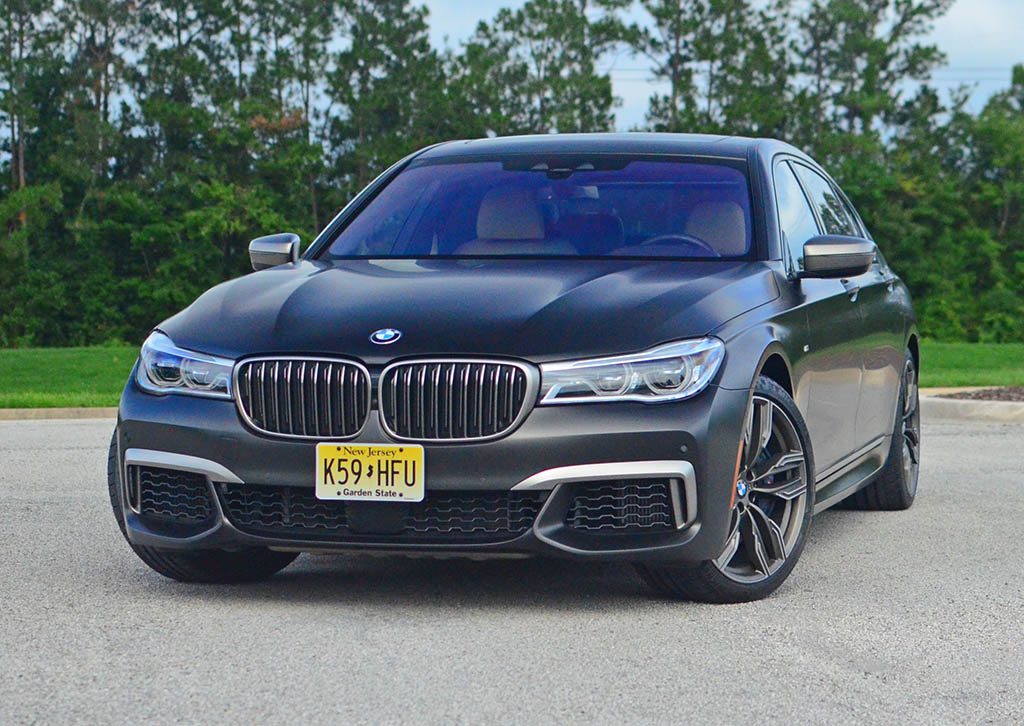 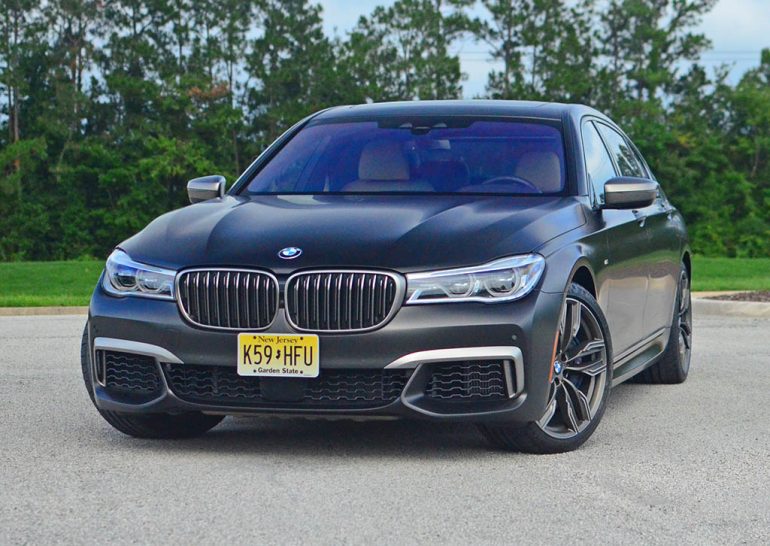 The pinnacle of luxury within the boundaries of a mainstream sedans have admittedly resided with the German barriers of the three-pronged star, and for the most part, chased by the Bavarian state-side of the country. For many decades, BMW has always created a sportier follow-up to Mercedes’ infamous S-Class sedans with the 7-Series. While the 7-Series wasn’t by any means lacking in the luxury department, the journalistic populous along with the inquiring public mass were all convinced that Mercedes would always edge out BMW when it came time to produce the latest luxury sedan benchmark. After taking a week to indulge in the lap of luxury a courtesy of best that BMW has to offer, I’m not so sure the luxury crown will reside safely in the courts of Affalterbach, Germany, home to Mercedes’ top-teir S-Class.

>> Get the best price on the BMW 7 Series from a network of local dealers now. <<

In comes the new 2017 BMW M760i xDrive, a rarity among luxury vehicles that signifies the upper echelon of BMW luxury, if such a thing exists to captivate S-Class fans. After my week long excursion in the best BMW 7-Series to ever grace this green earth, I would be safe to say in my own right that BMW is in the best position ever to challenge Benz of its luxury crown. Powered by a smooth power-surging twin-turbo 6.6-liter V12 engine with 601 horsepower and 590 lb-ft of torque, the BMW M760i xDrive is as poised as a dreamed-up M7 would be if there ever was such a thing. While the M760i is no M vehicle in the sense of what the M3 or M5 is for its proper vehicle class, power delivery is effortless, and it handles well to score 0.94g on the skidpad partly thanks to a set of high-performance 20-inch Michelin Pilot Super Sport tires. Imagine that! 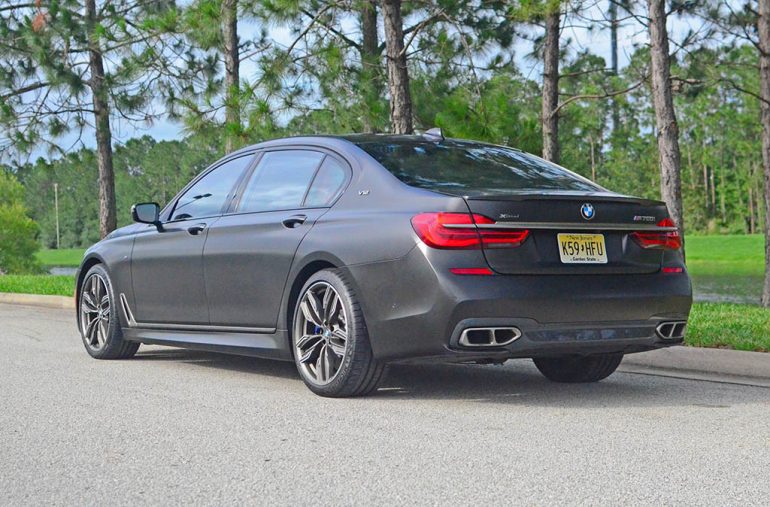 The M760i holds the position to carry a renowned crown of luxury for the brand in being the ultimate luxury sedan with a hint of BMW Motorsport inspiration. That inspiration moves through all four wheels firmly planted on the pavement where the M760i is among the most stable full-size luxury sedan I have ever experienced fresh off of the assembly line.

The new 2017 BMW M760i xDrive, coming in only one trim level with standard all-wheel-drive, embodies a plethora of advanced tech and surging power to make it the fastest 7-Series ever dashing to 60 mph in just 3.6 seconds. Such a feat seems almost physics-defying until you discover a launch mode built into the largest vehicle that BMW makes in all of its 5,101 pounds of German glory. I can personally vouch for the 3.6 seconds as I conducted a few launch-control tests. Launch mode requires placing the drive mode into full Sport, switching the 8-speed automatic transmission into its own Sport mode, depressing the traction control button once to enable a limited DSC (Dynamic Stability Control) mode, press the brake firmly followed by a full throttle press of the gas, and then release the brake. Oddly enough, the BMW M760i will launch in second gear. I mean, who has time to waste first gear? Believe it or not, the ultra-smooth-shifting 8-speed automatic transmission will start off in second gear most of the time to utilize the ample torque that reaches its peak at a remarkably low 1,550 rpm. It’s only when you switch the transmission into its manual shift mode that first gear is accessible, where you can manually shift your gears through the padded steering wheel shift paddles or the floor shifter. 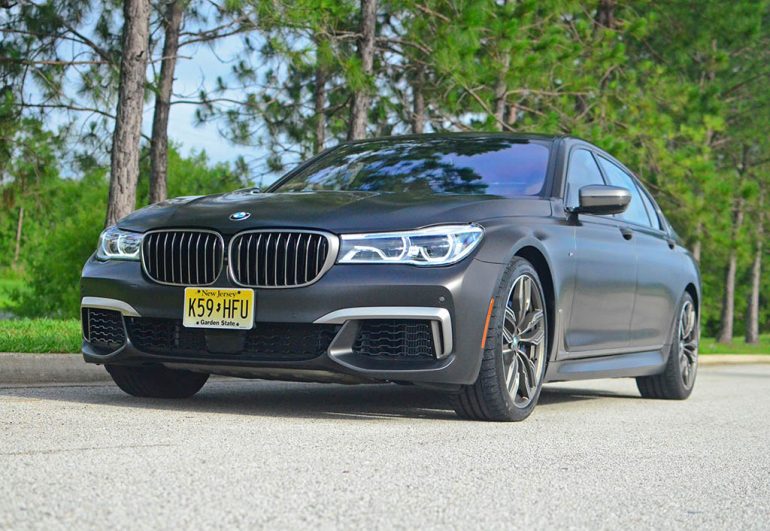 The self-leveling air suspension system is matched with setting up the desirable ride and drive quality through the many driving dynamics control modes, six modes in total (Eco Pro, Adaptive Comfort, Comfort Plus, Sport, and Sport Plus) Adaptive Comfort is the default mode upon startup of the vehicle, which is desirable for those who desire the supple ride quality that has long been stilled in the 7-Series. Moving to Comfort Plus things get a bit interesting, in a good way, with obvious signals of the computer taking over in a way to adjust the dampers at certain speeds from reading of the road for an after-effect of body movement to virtually smooth out road imperfections. I would go as far as to say the suspension system nearly rivals that of Mercedes-AMG’s Magic Body Control setup that “reads” the road to make millisecond adjustments to limit upsetting the body motion. Previous generation BMW 7-Series in their long wheelbase form have long been known for a remarkable ride quality. However, the new M760i takes things a bit further to perfectly balance a taste of sportiness in its Sport mode – the most you would ever want on such a large vehicle. The sound characteristic from the exhaust will even change in selecting Sport mode with a pleasing growl out back. Still, surprisingly, there is artificial sound pumped into the cabin upon mid to full throttle inputs, which is further emphasized in Sport modes. The pumped sound is understandable in Comfort modes as the cabin remains whisper quiet. 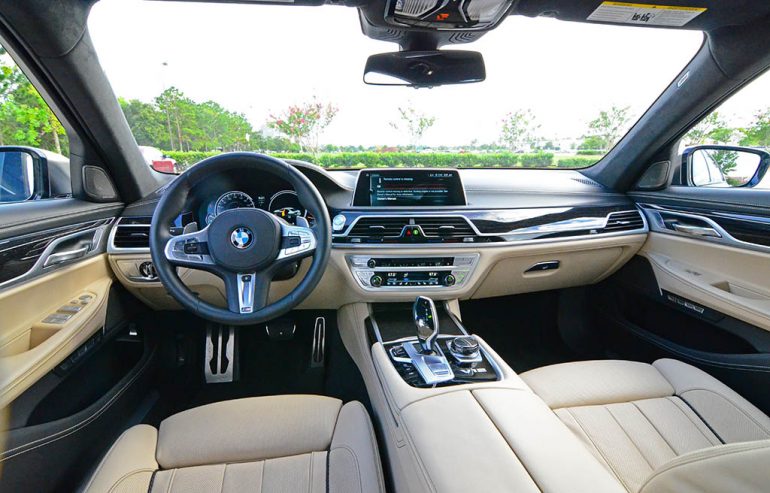 At highway speeds, the M760i has an environment much like your living room couch. Even pushing the big 7 though sharp back-road curves the body roll is kept to a minimum and without the feeling that you have overcooked a turn or entry to an exit ramp. The customization of Sport Individual mode permits the ability to separate many aspects of how the vehicle behaves, even down to automatic adjustment of the side seat bolsters with the selection of Sport mode. Speaking of seats, the comfort level is high as are the number of seat adjustments, as many as 20-ways with the addition of several massage features. 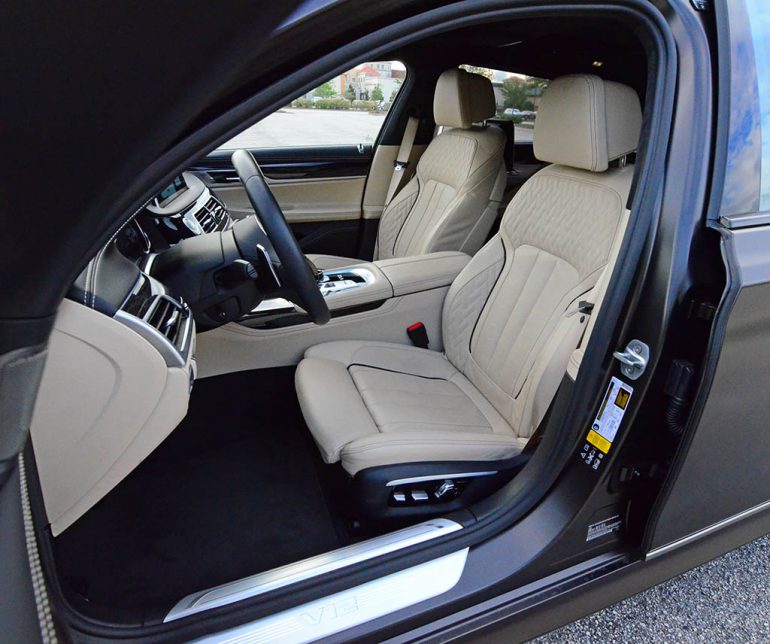 With the new 7-Series only having one wheelbase size, it appears there was a smart decision made to give passengers just the right amount of leg room. The use of space throughout the cavernous cabin is ingenious as is the number of high-quality materials lacing the cabin. The deep levels of immersive technology also contribute to an inviting environment inside of the new M760i. The new 12.3-inch infotainment screen, which is now a touch screen, embeds deep menus all grouped in a more user-friendly home screen interface. The latest iteration of BMW’s iDrive hurdles over many obstacles that were painstaking parts of the system in previous generations. There is a welcomed redundancy of controls, including the ability to use hand gestures to turn the volume up or perform a few other functions of your choice. Just know, if you dreamed of a feature that you wanted in your $170K full-size luxury sedan, BMW probably thought of it, and it can be found in the M760i, such as voicing a command to change the radio station or bring up your phone features. There is even a Samsung Android-based 7-inch Touch Command Tablet out back that can access as many as 24 vehicle functions for your personalized executive lounge with massaging and climate controlled seats. Have kids, no problem – the tablet takes advantage of its Android openness for installation of games just like any consumer-based tablet would. 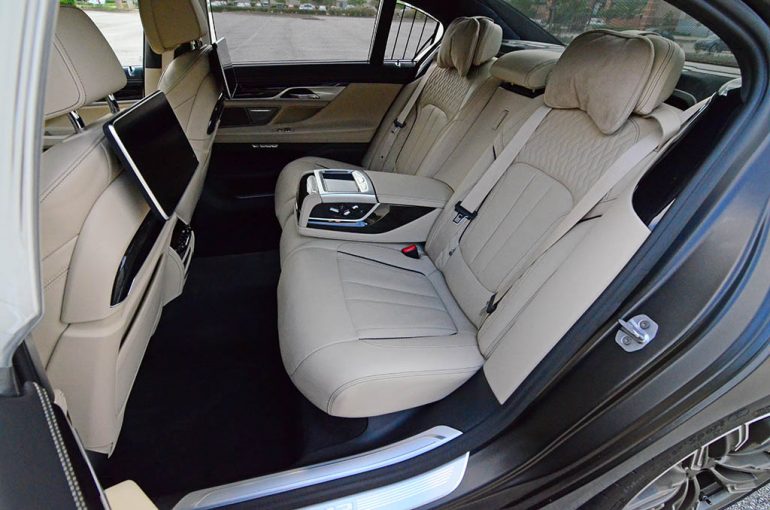 In full disclosure, I have long had a soft spot in my heart for BMW in being a long-time owner of such vehicles. Though, in my test drive review of the Mercedes-AMG S65 sedan, I was fully convinced that no one would ever bring a valid fight to the folks out of Affalterbach where the S Class is birthed. In my opinion, BMW has created a valid fight to Benz through the use of clever tech. The use of a carbon fiber core body structure prevents the M760i from being massively overweight. Though, at just over 5,000 pounds the twin-turbo V12 engine and remarkable management of the transmission’s shift points all combine a dynamic use of power to improve overall performance to a level much higher than all other 7-Series offerings. The handling dynamics are quite astounding for such a large and heavy vehicle. Never did the M760i feel like a boat. In fact, the assuredness of the body motion and stability was conducive of pushing the vehicle harder and faster – nearly reaching triple digit speeds unknowingly many times. 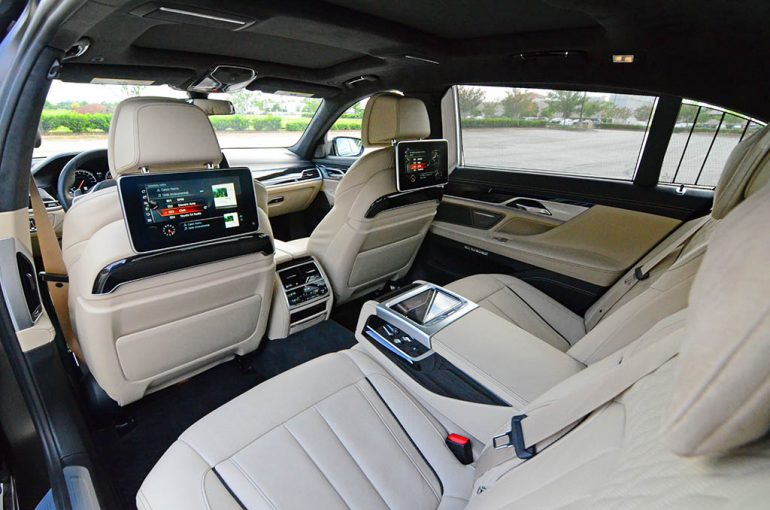 The major step towards autonomous driving is apparent in many new cars today. The new M760i brings most of that tech to your fingertips through its connected drive with traffic jam assistant, lane-keeping assistant, and steering and lane control assistant that virtually drives the vehicle for you but requires that you keep your hands on the wheel. Combining active safety tech, such as collision warning and mitigation, blind spot monitor and mitigation, and active side collision protection, the BMW M760i is a virtual fortress on wheels – nearly as quiet as one, too in the Eco Pro and Comfort drive modes. 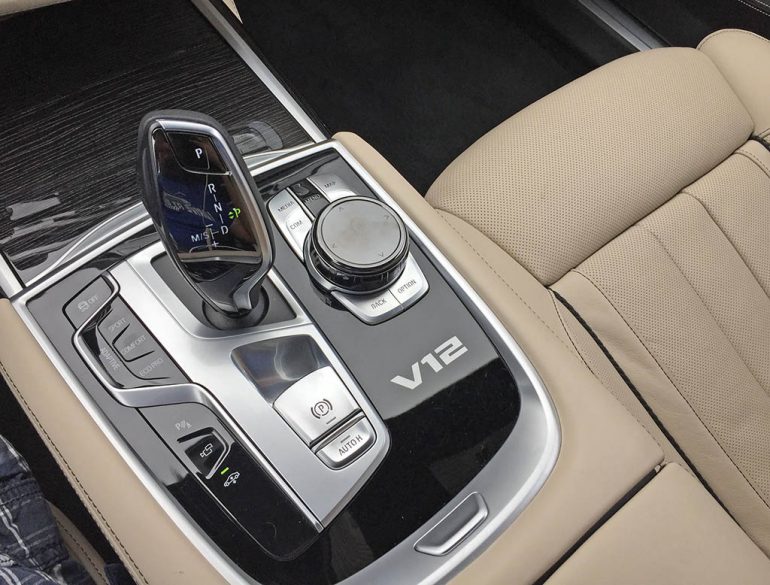 The economic side of the BMW M760i, which is more of an afterthought for a vehicle that starts at a price of $156,700, combines many features that can be found on smaller vehicles in the BMW lineup. The Eco Pro mode permits decoupling of the wheels from the drivetrain upon letting off of the throttle, and the system smartly engages engine deceleration at the optimal time. There are even active grill shutters that open for added cooling or close for less drag and more efficiency. The start-stop system is surprisingly smooth but hinders your comfort with an eventual stale air-conditioning after sitting for several seconds. EPA mpg figures for the M760i come in at 13 mpg city, 20 mpg highway, and 16 mpg combined, for whoever is counting. I observed nearly 23 mpg on the highway using the Eco Pro mode and as low as 12 mpg on average having a bit of road hogging fun in the city. I came away with 21.2 mpg on average during seldom commutes. 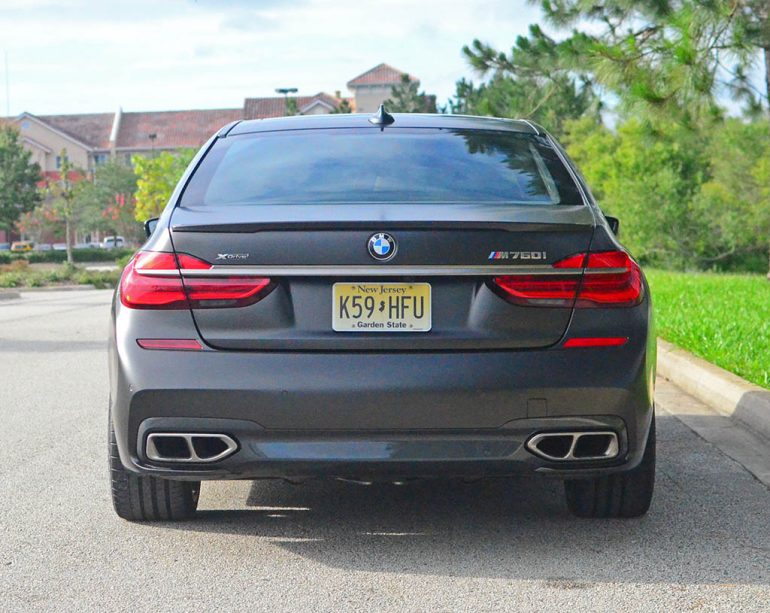 BMW has certainly upped the ante in the full-size luxury sedan landscape where Mercedes-AMG finally has some catching up to do, mostly in the technology realm. Of course, there is room to go another level in vehicles from Bentley and Rolls-Royce. You can almost dream up the M760i as being somewhat Rolls-Royce-ish, especially with the use of its V12 engine, similar to what is found in the latest Ghost.

While it’s my opinion of the M760i xDrive having the chops to come out victorious against a vehicle like the Mercedes-AMG S65 Sedan, most of the final round decision will be decided by the judges being our lovely public who have the proper means to indulge in such vehicles. However, those who do have the means should defiantly give the M760i a close look. If I were left to choose between the S65 Sedan and the new M760i xDrive, the BMW would be welcomed with open arms. Still, Benz has a long-standing elegance to bring to the table with an interior that is certainly classy. And then, there is the price of $171,895 for my test vehicle, which is about $50 grand less than the comparable S65. My test vehicle still had room for a few additional options such as the Remote Control Parking and a Night Vision with Pedestrian Detection. Otherwise, my test vehicle includes many amenities and tech goodies that you can’t find on any other vehicle – all that you could want in a modern-day full-size luxury sedan that you don’t mind ‘quickly’ driving to your in-the-sky downtown office.

>> Get the best price on the BMW 7 Series from a network of local dealers now. <<