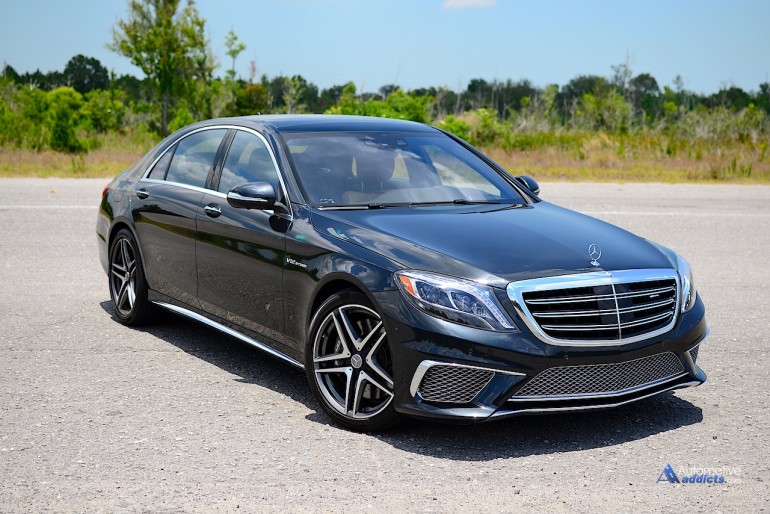 If there ever is something as characteristic as the pinnacle of mainstream automotive luxury, it is found in the 2015 Mercedes-Benz S Class. Taking things up a few notches within the S Class is left to the AMG tuning outlet. They have put their best efforts into the performance and luxury appointments of the brands flagship, the 2015 Mercedes-AMG S65 Sedan with a marvelous 6-liter Biturbo V12 engine. 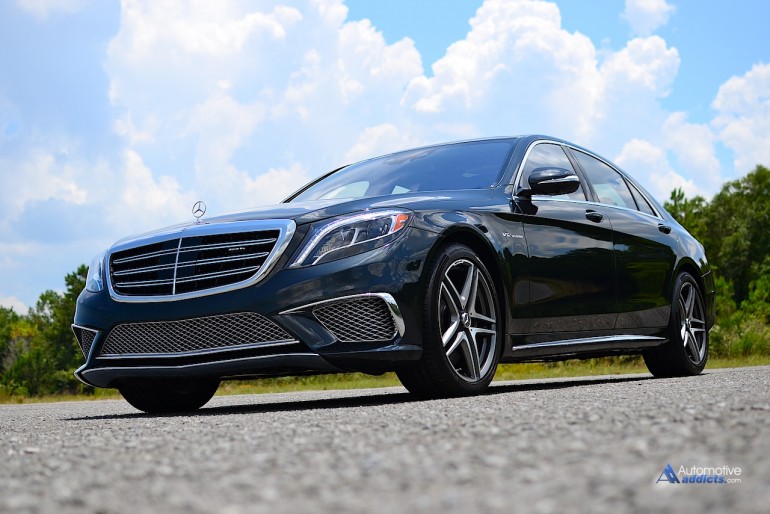 Without a doubt, the S65 AMG Sedan is among one of the finest automobiles I have had the pleasure of spending some quality time behind the wheel of. Every facet of the latest S65 AMG Sedan exudes living in the lap of luxury. From just about every soft-touch surface wrapped in thick hand-stitched leather, to the carbon fiber trim surrounding the polished climate control vents, the interior of the S65 is extravagant through and through. There is even quilt-patterned perforated leather covering another seamed layer of accented leather through parts of the elongated dashboard. Mercedes-Benz pulled out all of the stops when it came to the development and implementation of the S65, which is nothing short of a full sized luxury-performance masterpiece.

The brilliance of the new S65 AMG Sedan has no end. It all starts with the powerful Biturbo V12 engine purring through the quad-tipped exhaust with a solitary note that constantly reminds you of a monster lurking under the massively-proportioned aluminum hood. The 6-liter force-fed V12 is a potent mixture of shear thrust and lateral g-forces to the tune of 621 horsepower at just 4,800 rpm and 738 ft-lbs. of torque at 2,300 rpm. It doesn’t take much to get the aluminum-structured 4,969 pound full size luxury sedan moving, taking a short 4.2 seconds to reach 60 mph. 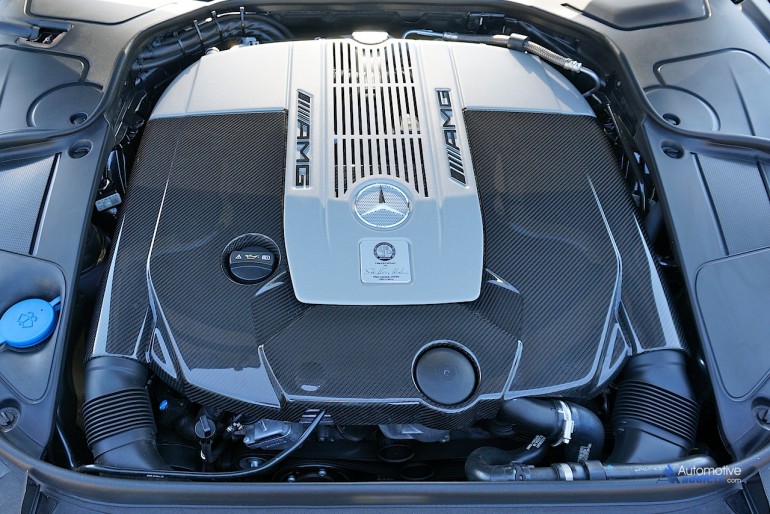 Exclusivity is one of those revered trademarks of the S65 AMG Sedan. Pitted as a performance powerhouse, the S65 AMG Sedan is refined in a way to keep its outlandish performance contained in a plush luxury wrapper only to be unwrapped by those who have the proper means to have it all in life. Those means will be required to not only write a nearly quarter-million dollar check, but to supply copious amounts of premium fuel for the thirsty V12 that gets an EPA-estimated 13 mpg city and 20 mpg highway. 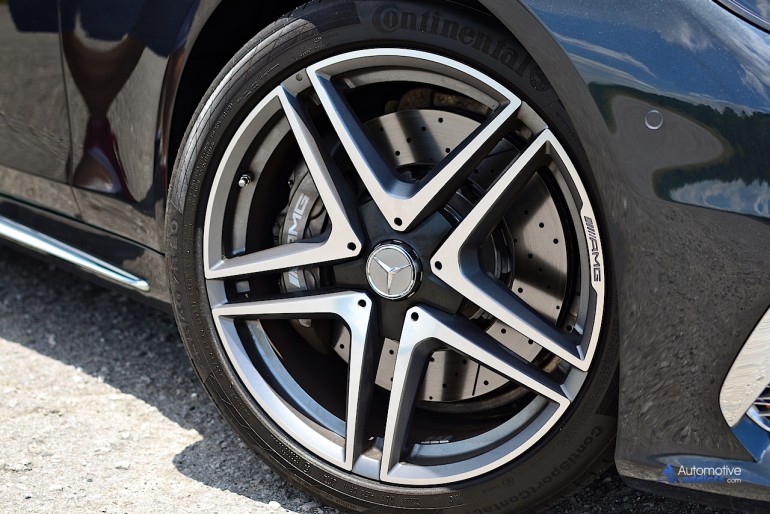 Wrapped up in a luxurious package tagged with a V12 Biturbo emblem on the side signifying its dominance, you will find a 7-speed AMG Speedshift Plus transmission to deliver the immense power to the rear wheels. The 7-speed automatic used in the S65 AMG Sedan is similar to units found in other Benz vehicles. However, the S65’s transmission utilizes a wet clutch setup in place of a normal torque converter. Use of the wet clutch, which is a giveaway to the default 2nd gear start setting in Comfort drive mode slips into gear as you accelerate from a dead stop, may be a clever way of retaining reliability with the turbo V12’s silky-smooth high power output. The combination makes for snappy shifts through the gears and not a second wasted to send that power to the rear 20-inch forged wheels wrapped with 285/35R20 tires. Selecting the Sport drive mode will enable 1st gear starts as well a much more aggressive shift program. The Manual drive mode permits use of the steering wheel-mounted shift paddles – if you so desire. Use of full throttle inputs in any mode will allow quick downshifts to the lowest selectable gear, including 1st gear at low speeds. 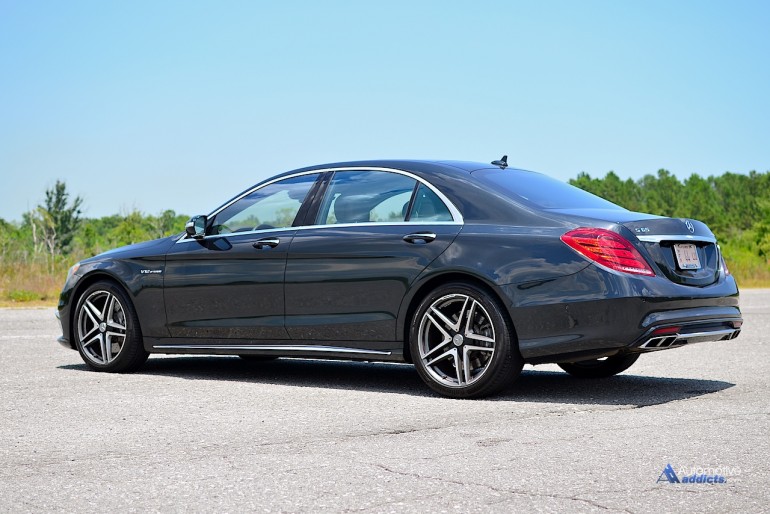 As with any AMG vehicle, the Mercedes-Benz S65 has the goods to complete a proper performance sedan package even with the large dimensions of the S Class. Working with such a chassis paved a path for the expected AMG goodies, such as cross-drilled floating brake rotors clamped down on with 6-piston calipers up front. As the pinnacle of the brand’s performance chain, the S65 AMG Sedan was equipped with the first ever suspension system to adapt to surfaces by scanning the road through stereoscopic cameras. Such a setup enabled millisecond adjustments to the adaptive air suspension system and its dampers to take the trademarked Magic Body Control suspension system to a whole new level. Experiencing the suspension system is almost science fiction as road imperfections that you are used to upsetting the balance of your own vehicle are modulated and smoothed out on the fly. The S65 AMG Sedan virtually flattens out those bumps, dips and rises in the road. There really isn’t anything else like it – the body of the S65 AMG Sedan stays nearly flat even when pushed hard into turns. 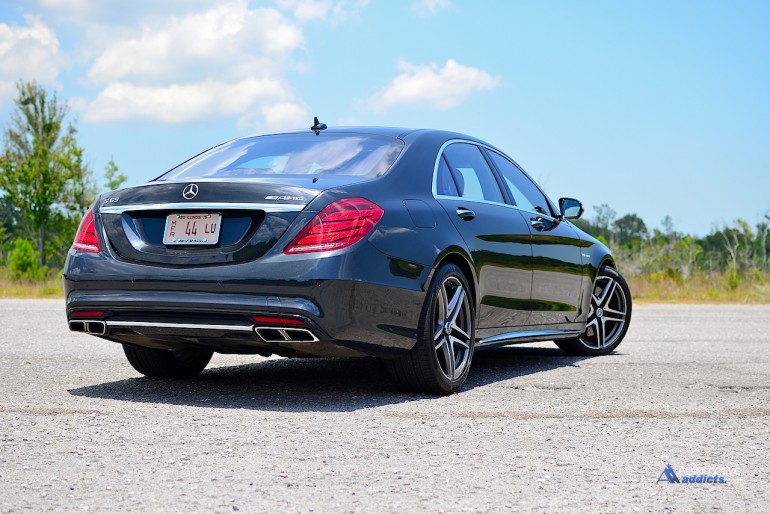 Placing the adaptive air suspension system into Sport mode tightens things up a bit as it adapts to the road in a much more traditional sense without taking quick measurements of the pavement’s imperfections ahead as it will on Comfort mode. Coupled with all of the cameras and radar sensors, including night vision to detect pedestrians at night displayed directly on the 12.3-inch driver’s gauge cluster, you can think of the S65 AMG Sedan as an AWACS aircraft with a three-pointed star logo seeking out targets for a wave of bombers to destroy.

Imagine this, every creature comfort, every safety feature, or just about any luxury amenity you could dream up, the S65 AMG Sedan probably has it. There is a list caulk full of features in the S65 that are at your service, making up to 3 passengers and the driver feel like they are royalty. Trust me, you are royalty when you get to travel in a vehicle that has a heated armrest and door panels, in addition to the expected cooled and heated massaging seats. Did I mention the climate control has its own fragrance stored in the glove box emitted into the cabin at your command? 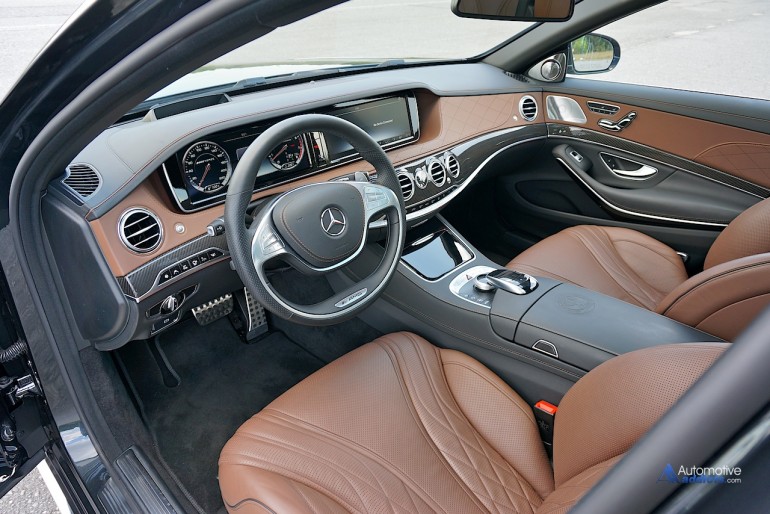 You can laugh, it’s okay. If it helps, I hilariously chucked every time I enabled the seat massager in one of its 6 selectable modes. I equally blurted out a few choice expletives while I nearly crested triple digit speeds only after a few seconds of laying into the throttle. I swear it felt like only 70 mph officer.

Funny enough, while all of this “discovery” was going on, my daughter quietly sipped her cooled beverage from the rear console refrigerator while she remotely commanded the movie “Big Hero 6” to play on the high resolution screen in front of her. Turning the remarkable 24-speaker Burmester sound system up to play her movie felt as if I was live ringside of the Mayweather-Pacquiao fight – come to find out it was only the fighting robot scene. The artsy look of the speaker grills was almost just as thrilling as the crisp high and low sound waves the audio system emitted through the cabin. More exciting than the ringside of THAT fight. 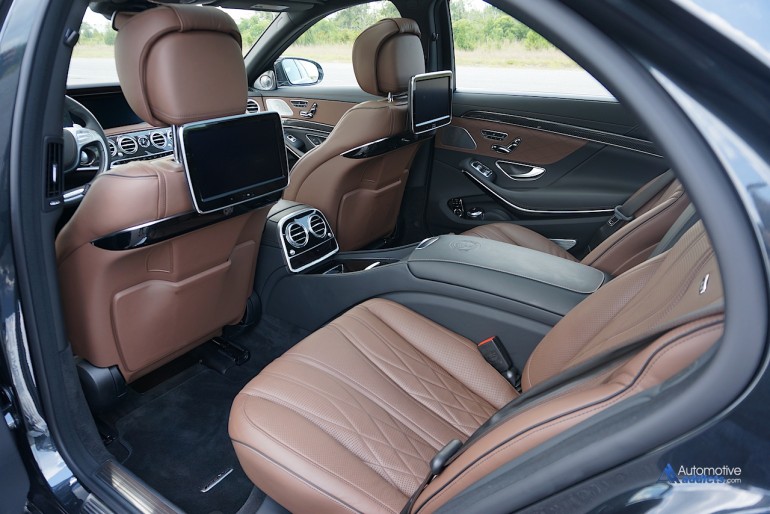 Operation of the COMAND infotainment system, controlled through a redundancy of controls, including a large rotary toggle, handwriting-recognizing touchpad, and a select number of physical buttons, allows for separate viewing environments for the driver and passenger on the enormous 12.3 inch high-resolution screen (the front passenger can view a completely different image, such as a movie, separate from what the driver sees due to their angle on the same center-stack COMAND infotainment screen). Captivating the driver with a plethora of drive information is the duty of an equally-as-large screen acting as the gauge cluster. 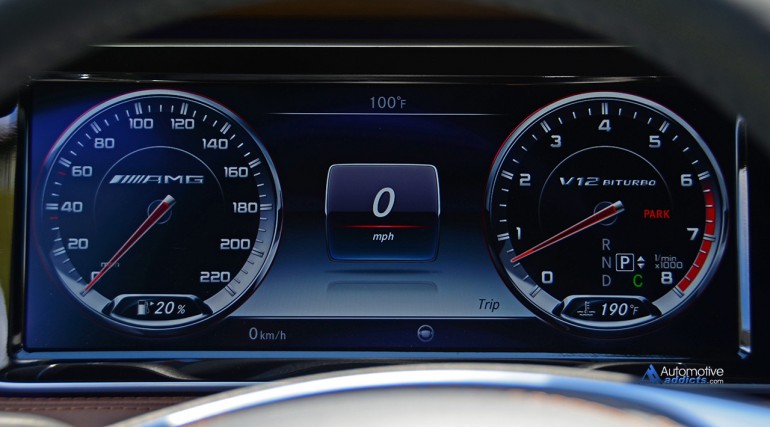 Safety has never been so much of a concern for automakers. Mercedes-Benz, as demonstrated in their many commercials on daytime TV, virtually surrounds their vehicles with a safety blanket, dubbed as their Pre-Safe Predictive Occupant safety system. The S65 AMG Sedan is no different enabling an audible alert followed by auto braking in eminent forward collision situations. Additionally, the S65 combines active blind spot assist, active lane keeping assist, Pre-Safe pedestrian detection and rear-end collision protection, and an attention assist that will alert you if it detects drowsiness through several factors of your driving behavior. As far as the complexity and how each system functions, just know that the S65 AMG Sedan is among the safest vehicles on the road that will do a superb job of avoiding an accident even at the faults of your human instincts. 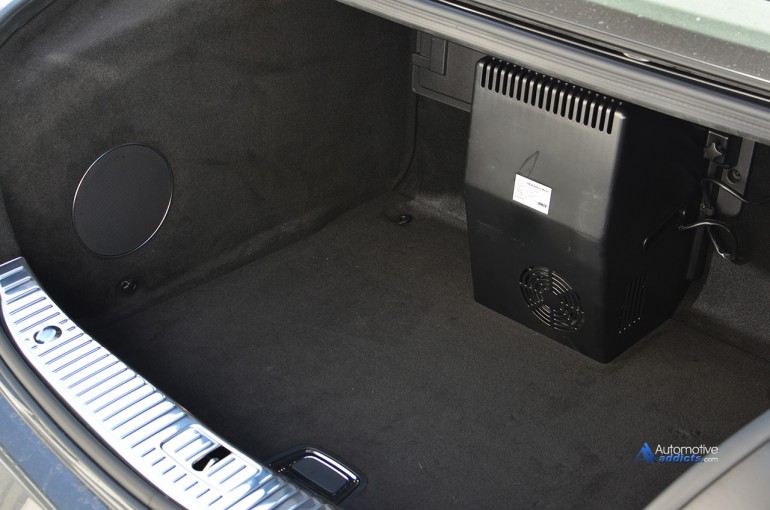 At the upper echelon of luxury and full-size vehicle performance, there is nothing left to be desired in the S65. Though similar in construction and design to that of the S550 Sedan, the S65 AMG Sedan improves upon many aspects of the Mercedes flagship vehicle. It is as if you take the best wide receiver currently in the NFL and inject him full of a legal steroid solution that not only made him faster, but he looked more handsome, instantly became a better father to his children and husband to his wife, and he even cooked dinner 5 days out of the week. The only side effect, unfortunately, was his signing bonus and salary nearly doubled. How much is that bonus you ask? The elaborate figure of $231,375 as tested, which is about $9K over the base price of $222,000 for the 2015 Mercedes-AMG S65 Sedan. Mind you, the respectable benchmarked S550 Sedan, the starting point for one of the most respected full sized luxury sedans on the road, starts at a price of $94,400, while the next level down from the S65, the S63 AMG 4MATIC Sedan, starts at $141,450 with a 5.5-liter 577-hp Biturbo V8 and 4Matic all-wheel-drive.

But who are we fooling here? If you want the ultimate, to be among the best there is outside of the performance-oriented Bentley and Rolls-Royce competition, the S65 AMG Sedan is the one to write a check for out of that Swiss bank account. Oh, you don’t need to pay a driver to tote you around; this one’s a luxurious thrill machine that begs for you to get behind the wheel. The $190,000+ Mercedes-Maybach S600 is reserved for the Chauffeur.