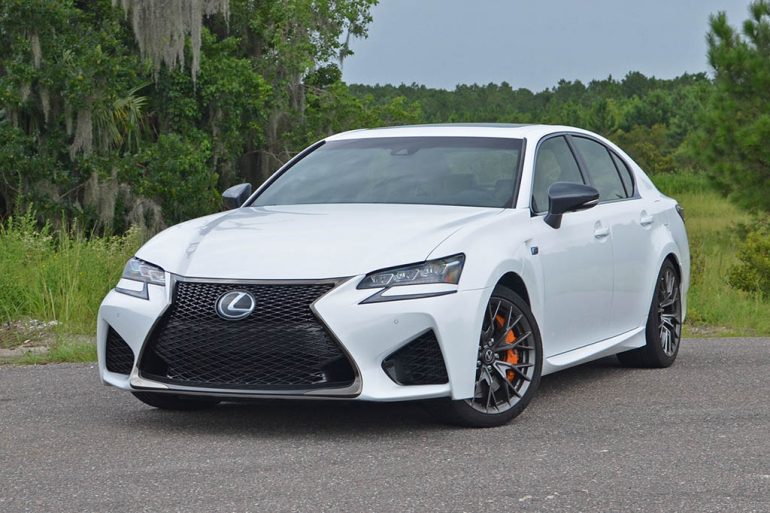 When I first encountered the new Lexus RC F I was immediately a fan. Though, at the time I was intrigued by what BMW had to offer in the new M4, which was the better vehicle for track days as well as spirited everyday commutes to work. Shortly after the conception of the new RC F, Lexus introduced the GS F, which features the same naturally-aspirated 5.0-liter V8 engine producing 467 horsepower and 389 pound-feet of torque. Interestingly enough, the GS F, in my opinion, is a much more balanced and capable vehicle than its RC F brethren. Now, into its second year of production, the 2017 GS F gets a revised suspension that features adaptive dampers for a more dynamic handling and ride quality, which proves to be slightly better over the previous year’s fixed damper setup.

Ever since I indulged into all that the GS F had to offer last year, my takeaway was that Lexus conceived one of the best pieced-together luxury sports sedans. Just stepping into the Lexus GS F and resting your hind parts in the highly bolstered perforated leather seats and feeling the tight fit and finish of the cabin gives off a sense of quality. While the GS F remains down on power compared to much of its direct competition, it makes due with an ideal drive quality that assures the driver no matter the level of experience. As far as engagement, the GS F’s 5.0-liter V8 howls from its intake, which is somewhat accentuated by the Active Sound Control (ASC) through the front and rear speakers around 3,500 rpm for a welcomed growl that emits through the cabin. Just like last year, the ASC can be disabled. The exhaust remains to be muffled only to emit subtle drones but never overly intrusive. 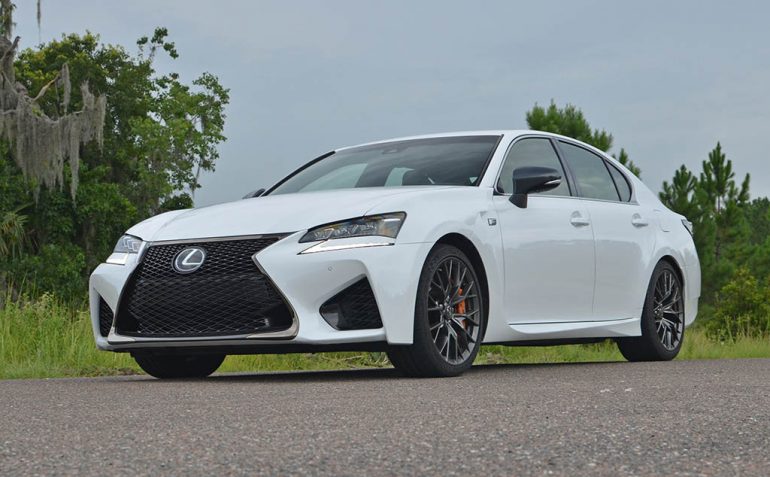 Lexus’ decision to implement adaptive dampers, which is the major change for the 2017 model year, makes the GS F a more active grasp on the way it grapples at the road. From my observation in driving the GS F extensively last year, and now the new 2017 model year, the GS F now exhibits a better feel. It can now be left in its default drive mode for a softer ride quality or firmed up through either the Sport S+ drive mode or a new-for-2017 Customized drive mode that allows you to offset the steering effort, engine/transmission response, and suspension damper setting. Using the Sport S+ mode or a properly Customized drive setting to firm up the dampers, the GS F slightly transforms into a luxury sports sedan that is more poised for carving canyons or seldom track duties. In a way, the adaptive dampers make the GS F feel lighter than it is and much more controlled, even though the 2016 model was already the better choice over the RC F coupe despite having the same sowing-machine-smooth 5.0-liter V8 engine. There has always been something special about having the 4-door sedan platform of the GS F with its surprising lateral handling abilities, which is somewhat thanks to sticky Michelin Pilot Super Sport tires (255/35/19R front and 275/35/R19 rear) wrapping staggered forged 19-inch wheels. 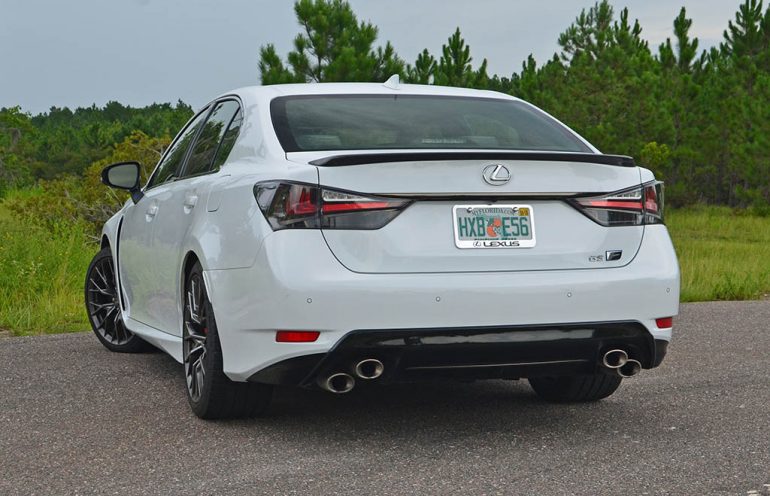 The decently-sized orange-painted Brembo brakes with 6-piston calipers up front on 14.9-inch slotted rotors, and 4-piston rears biting down on 13.5 slotted rotors, braking is assured with stops from 70 mph in 160 feet. Running to 60 mph from a stop takes about 4.4 seconds, a respectable number considering the 467-horsepower figure. The agility of the Lexus GS F is a collective of all its parts, including the 8-speed automatic transmission, which, at times, still has its faults for a slight delay in downshifting when the vehicle is in its normal drive mode. Moreover, the upshifts could use a bit more urgency even though they are nicely executed each time without any apparent indecisiveness. Use of the Sport S+ mode is the more desirable setting for enthusiasts where the transmission rarely shifts past 6th gear keeping the lower gears ready for action. 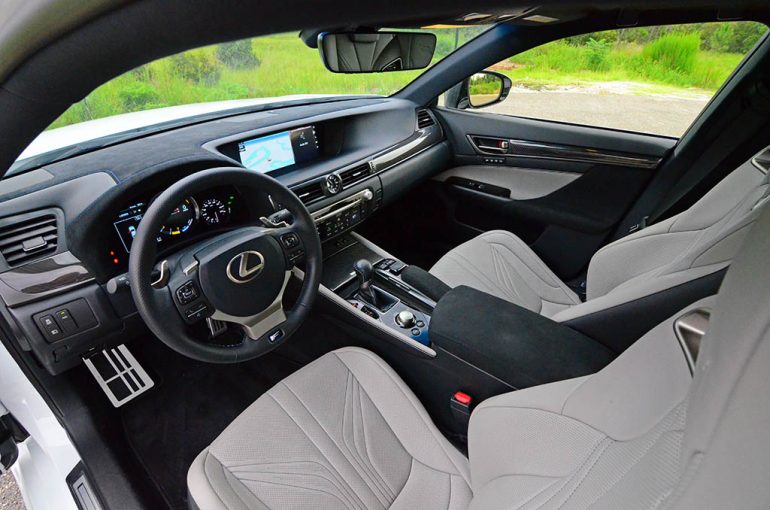 Lexus continues to keep with the tradition of building quality vehicles that exude a high level of consistent dependability. Closing one of the four doors alone is evidence of the build quality, and the GS F appears to take it a step further when it comes to the body rigidity and overall feel of the way the GS F rides, void of any body flex or give – apart from the suspension system doing its job. Even the use of a torque vectoring rear differential (TVD) permits use of several modes to adapt to your driving condition, whether it be a normal driving, a slalom, or track use, which variably dials in more stability. 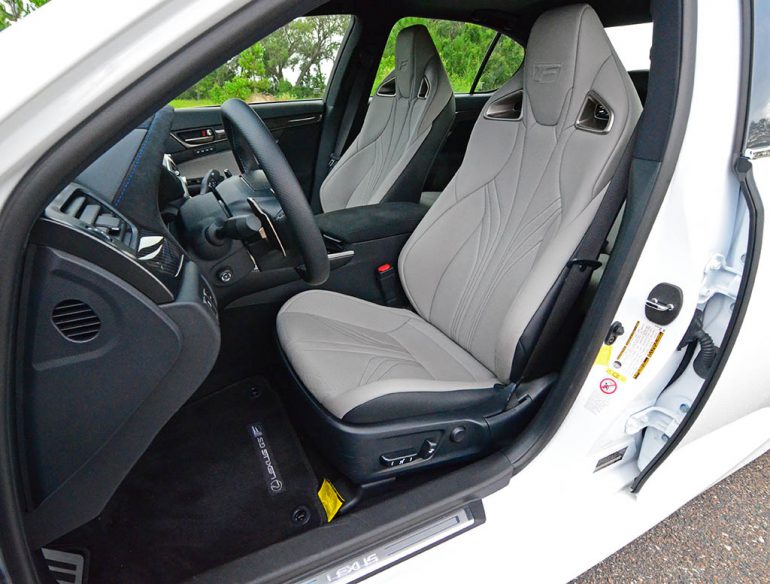 The interior of the Lexus GS F spices up the traditional look of normal trimmed GS vehicles with accenting stitching to match the “F” theme of Lexus performance vehicles. The LCD gauge cluster, a derivative from the LFA supercar continues to impress with its focus on performance with a center RPM dial that is slightly modified with each drive mode selection to display the pertinent information that you need according to your driving situation. 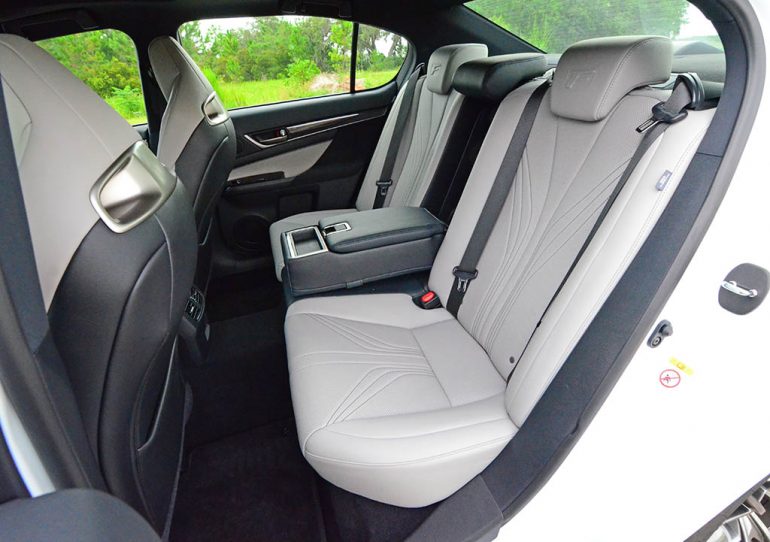 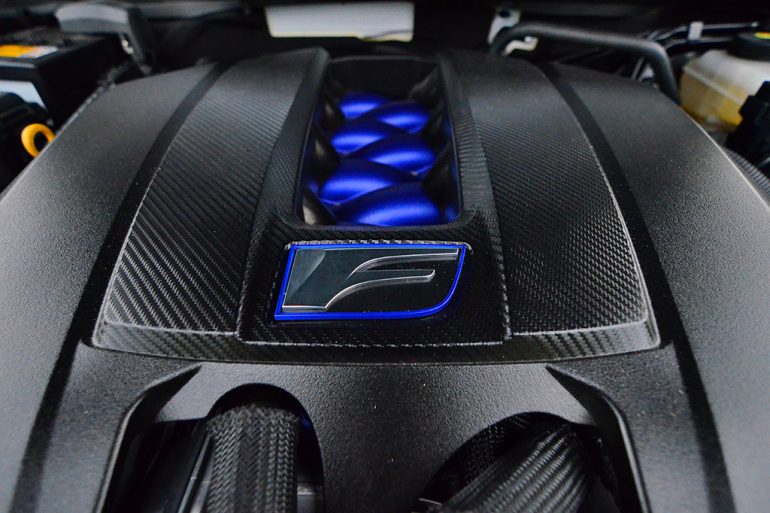 As I have explained before in my first encounter with the GS F, the price of admission undercutting the direct competition may be the saving grace aspect considering at the as-tested price of $87,275 is a hard pill for some to swallow for some in a 467-horsepower Lexus. Still, horsepower numbers aren’t everything, and the GS F proves such a point by its remarkable quality aspects and uniqueness to a coveted segment that reserved for a niche audience. Would I pick the GS F over something like a new BMW M5 or Mercedes-AMG E63 – Yes, I would, and I would keep it for many years without the worry of high maintenance bills after its standard 4-year/50K mile warranty expired.