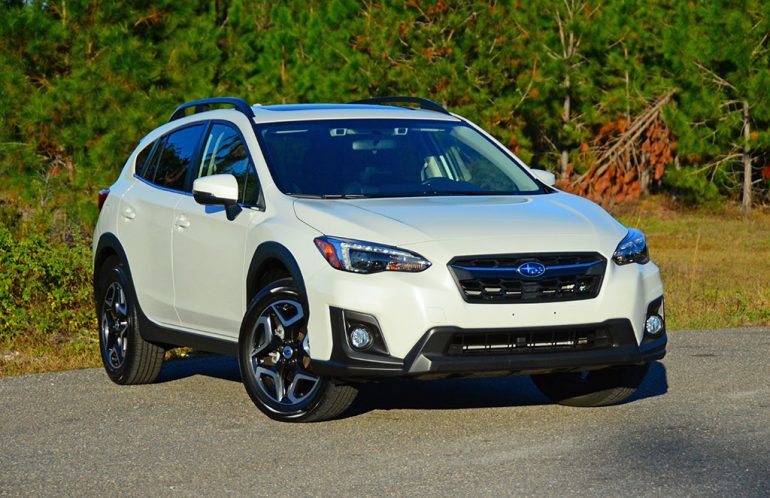 In hopes of keeping things interesting and captivating for the record number of Americans looking to fill their driveway with the latest and greatest crossover utility vehicle, Subaru redesigns their Crosstrek sports utility vehicle. The Subaru Crosstrek has been a favorite for the brand loyalists who fall into a conventional category but occasionally adventure off the beaten path.

The new 2018 Subaru Crosstrek is claimed to be 90% brand-new from the ground up when compared to the outgoing model year. For most, the differences are difficult to spot initially until you spend a bit of quality time behind the wheel or at least looking at its mildly reshaped fascia and body panels. Riding on a new chassis, one proven to be more ridged, the Crosstrek proves that it can benefit from subtle changes that go the distance to improve upon overall refinement.

>> Get the best price on the Subaru Crosstrek from a network of local dealers now. << 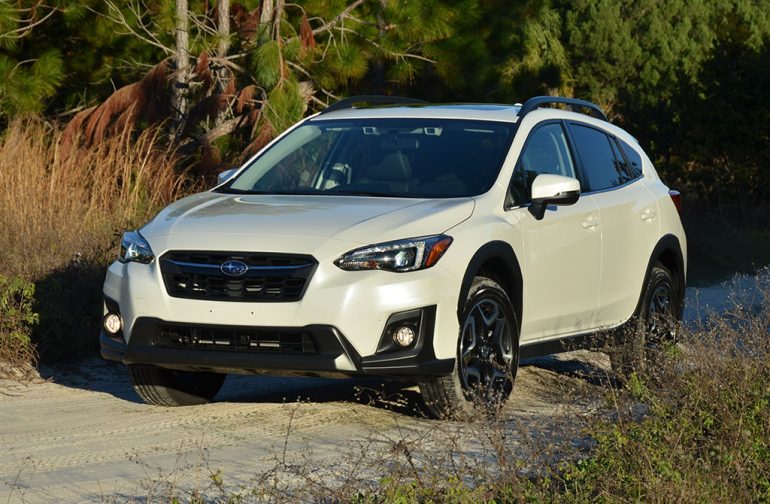 Part of what makes up the Crosstrek’s sporty looks translates well into its new design but doesn’t depart far from the previous year’s well-praised design. The new 2018 Crosstrek gets the same displacement as before but with a slightly reworked 2.0-liter horizontally-opposed (boxer) engine good for 152 horsepower, which is up 4 ponies from last year but gets the same 145 lb-ft of torque from previous years. The boxer engine is mated to an updated Continuously Variable Transmission (CVT) that appears to adapt smoother and faster to driver inputs with virtual gear ratio step downs to act more like a traditional automatic transmission. 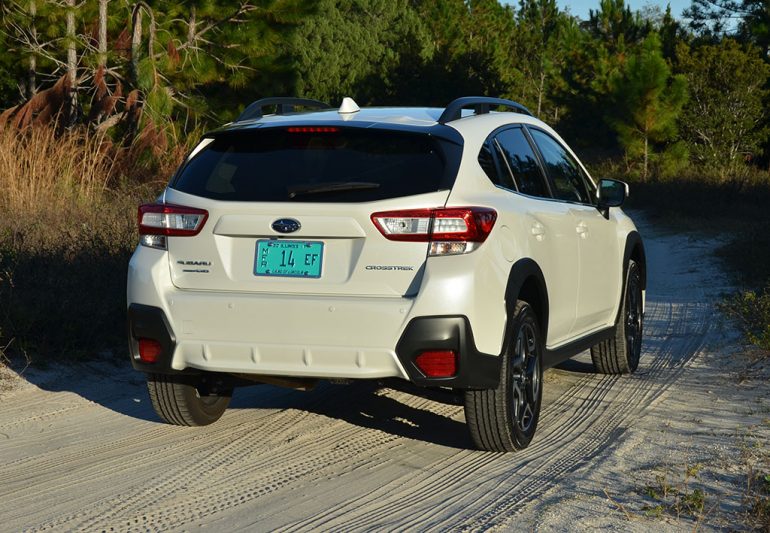 Unfortunately, the new 2018 Crosstrek continues to dissatisfy in the area of power output but with the CVT update it is zippy enough to not be dangerous and pacify most buyers who aren’t looking to keep up anyone’s sports car. However, I won’t mince words when describing the performance of the Crosstrek as it does have lackluster acceleration and takes about 10 seconds to reach 60 mph in my tests, which isn’t very inspiring when you want to overtake vehicles at highway speeds.

On the flip side of things, apart from the Crosstrek’s pokey acceleration, the revised chassis and suspension delivers a smooth ride and mild confidence in handling especially when you consider the high ground clearance of 8.7 inches. Taking the Crosstrek off-road and using X-Mode to adapt the CVT to use a lower ratio to keep the engine spinning up for added torque, in addition to hill-decent control, the small crossover becomes a mildly-mannered terrain explorer. 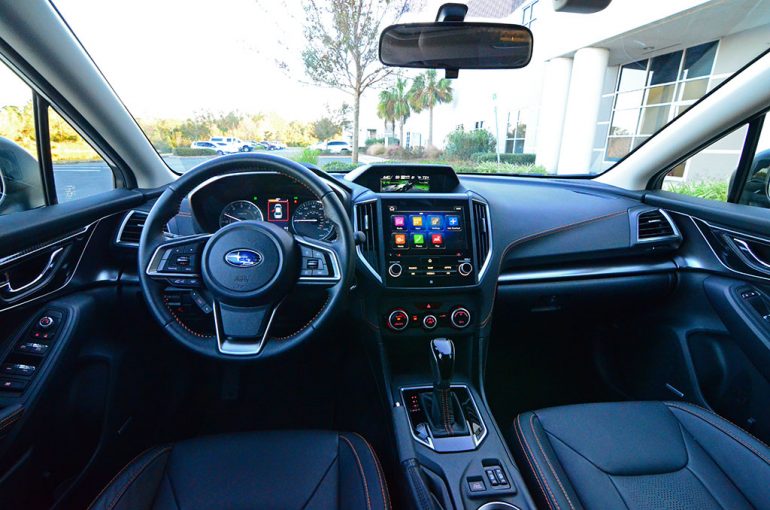 The new 2018 Subaru Crosstrek’s redesign embodies most of its improvements on the inside where there is a much more refined cabin and additional features throughout in the top-level Limited trim. Taking away from a utilitarian theme, the new Subaru Crosstrek dresses up the cabin with more soft touch areas, accent stitching, and a better design aesthetic that exudes more quality than before. 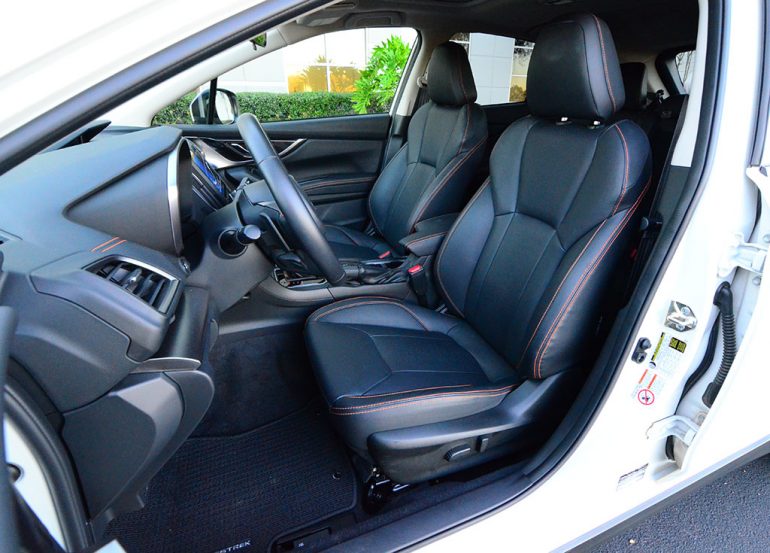 In addition to a quieter cabin refining the dashboard through subtle contrasts, the front heated seats are more comfortable, and a much-improved infotainment system fed through a large 8-inch touchscreen is a welcomed change to the outgoing cumbersome units offered. The infotainment system on the Crosstrek 2.0i Limited trim proved to be more user friendly with straight forward menus and controls. The updated soft-touch dashboard with an automatic climate control and optimally-placed control knobs completed the overall appeal to Subaru’s simplistic theme found in many of their vehicles. There is an updated color center-dashboard information screen that actively displays car functions and motions in a clever method, such as animating the headlights, taillights, brake lights, and even the turn signals when they are in use. Additionally, the information screen displays all the active safety tech features and their status as part of the latest iteration of Subaru’s EyeSight system, which combines automatic emergency braking, lane departure warning, adaptive cruise control, exceptionally-bright steering responsive automatic high-beam LED headlights, blind spot monitors, and a reverse automatic braking to help avoid backing into an unseen object. Having bright and steering responsive LED headlights, a bevy of advanced safety tech working in sync, and capturing excellent crash scores, the new 2018 Subaru Crosstrek earns IIHS 2017 Top Safety Pick + Award – continuing a recognized pattern of putting safety at the forefront. 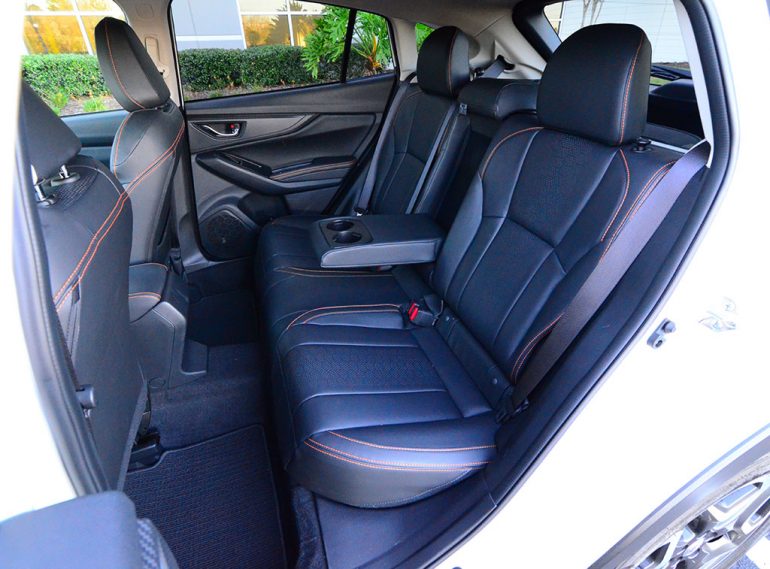 Versatility is another forte of the Subaru Crosstrek’s in its goal to appease those who want a vehicle that can serve duty on many levels. Not only does the Crosstrek conquer mild terrain but it can haul a decent amount of cargo, as much stuff as you can fit into just over 55 cubic feet of space with the rear 60/40-split seat backs folded down. With the seat backs in place you have just over 20 cubic feet of storage accessed from the rear hatch. 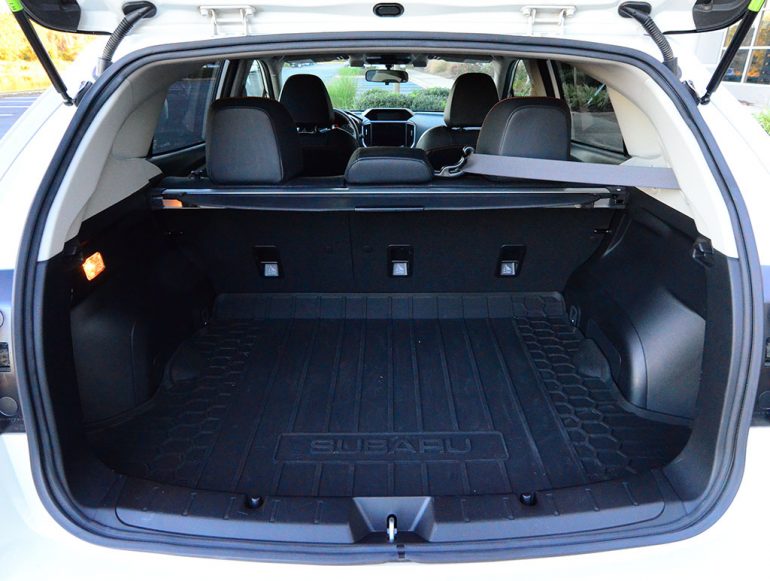 Subaru’s long-standing reliability, durability, and value goes the distance to make the new Crosstrek a compelling buy despite not having any noticeable improvement in its power output. While the Crosstrek will continue to appeal to those who think of horsepower being an aftereffect, the interior improvements and active safety tech will pay dividends to make the top-end Crosstrek 2.0i Limited trim’s as-tested price of $30,655 appear to be a value. Moreover, the starting price of the 2018 Subaru Crosstrek at $21,795 is a captivating proposition for a versatile crossover with the chops to tackle the off-roading duties that many car-based crossovers would never venture.

>> Get the best price on the Subaru Crosstrek from a network of local dealers now. <<