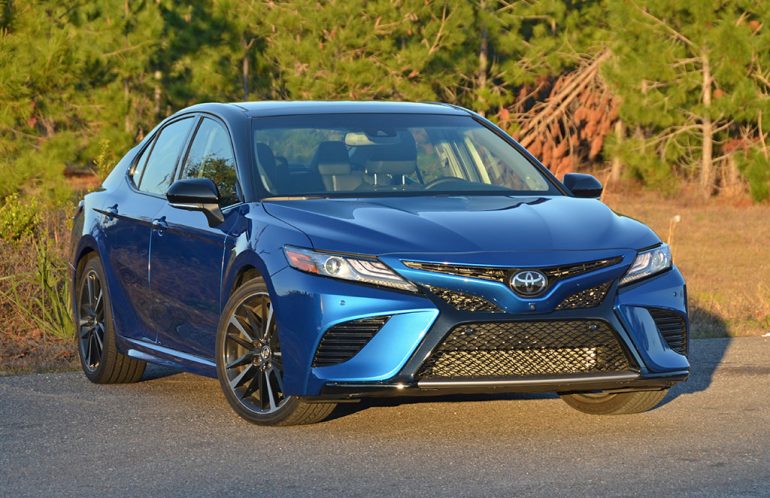 The Toyota Camry has been an American staple when it comes to defining the mainstream midsized sedan standard. While vehicles like the Honda Accord have also contributed to the American automotive sedan establishment, the Camry has claimed its top sales spot for many years validating its significance in a broad stroke of what the masses seek in a reliable and economical vehicle. For the 2018 model year, the Toyota Camry gets a full redesign with its boldest styling yet pushing the idea of Toyota setting new precedence of building vehicles that aren’t boring.

>> Get the best price on the Toyota Camry from a network of local dealers now. << 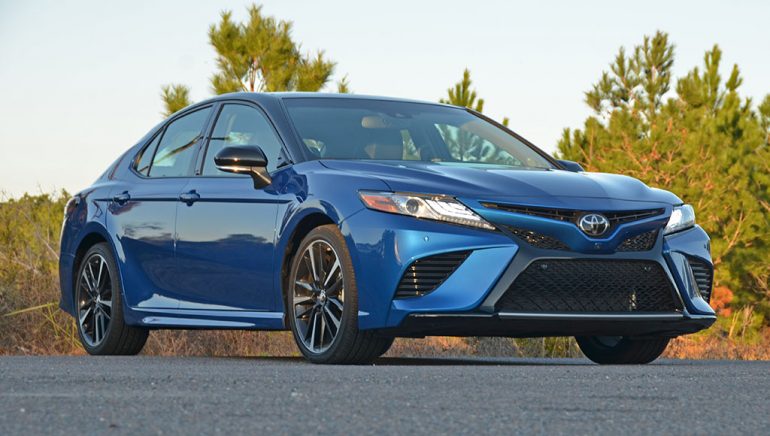 The new 2018 Toyota Camry embarks on a new path to captivate enthusiasts with its exterior design. I say “exterior design” due to my week of driving the top-trimmed Camry XSE V6 discovering many hidden soft characteristics that otherwise strip the Camry of its sporty visuals. In a nutshell, the new Camry drives much different than it looks. It’s not a bad thing, its more of a deceptive concept in that the new Camry in its XSE V6 trim optioned out with the two-tone body paint scheme, dual exhaust tips, aggressive-looking diffusers and front bumper splitters don’t live up to its sporty hype when you’re behind the wheel. 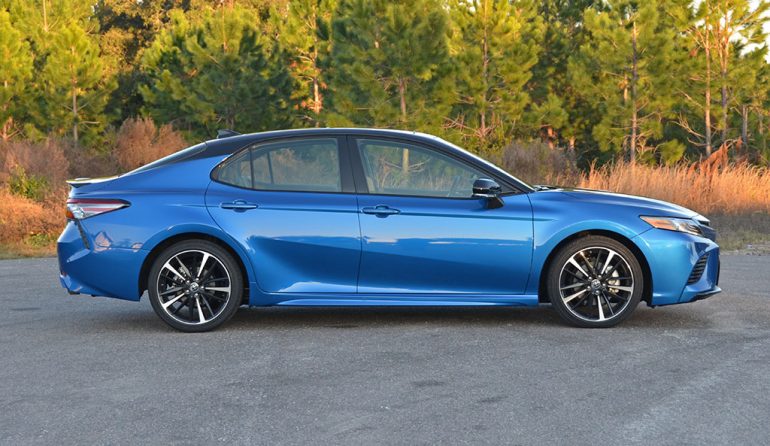 Keeping with the onset of its looks, the new 2018 Toyota Camry can still be had with the well praised 3.5-liter V6 engine, now redesigned to output 301 horsepower and 267 lb-ft of torque mated to an 8-speed automatic transmission that can be shifted manually from steering wheel-mounted paddles. Retaining the primary offering of two engine choices and a Hybrid option, the Camry makes due with respectable fuel economy numbers and gets the duties of performing decently without issue. Of course, as you expect, the V6 models, which can be had in either the XLE or XSE trim levels, is the choice vehicle for those who have an inkling of added smoothness and the assuredness of extra power on the open road. 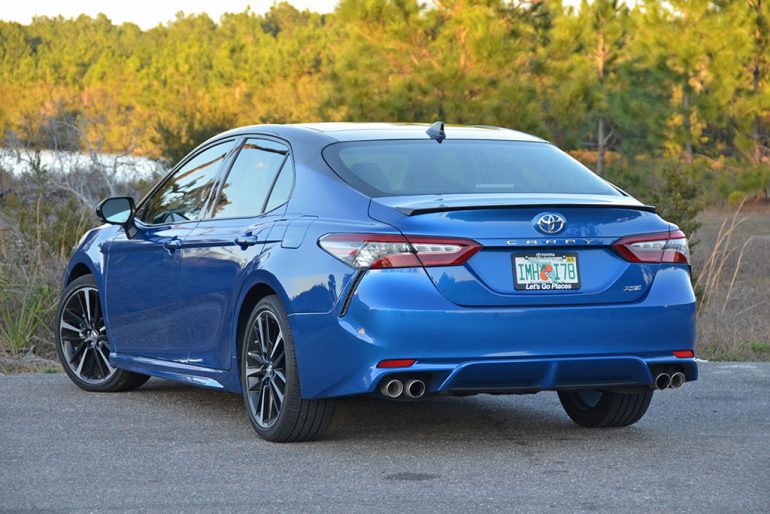 Overall, the new 2018 Toyota Camry XSE V6 is a soft vehicle that feels as if Toyota took the nicest midsized sponge on four wheels and dolled it up with a flashy design, the proper sporty bolt-ons, and eye-popping paint. Being that such a description is rudimentary, I do adore the look of the new Camry, especially dressed in my test vehicle’s Blue Streak painted body with the black roof. In all, it looks stunning to me and almost plays the part of being a menacing sleeper – visually. However, there’s the real world we must contend with, and in it, we have a refined sewing machine that doesn’t thrill your motion senses to the level that your eyes repeatedly glance over the sharp, sporty edges and sheered lines throughout the body of the new Camry XSE. 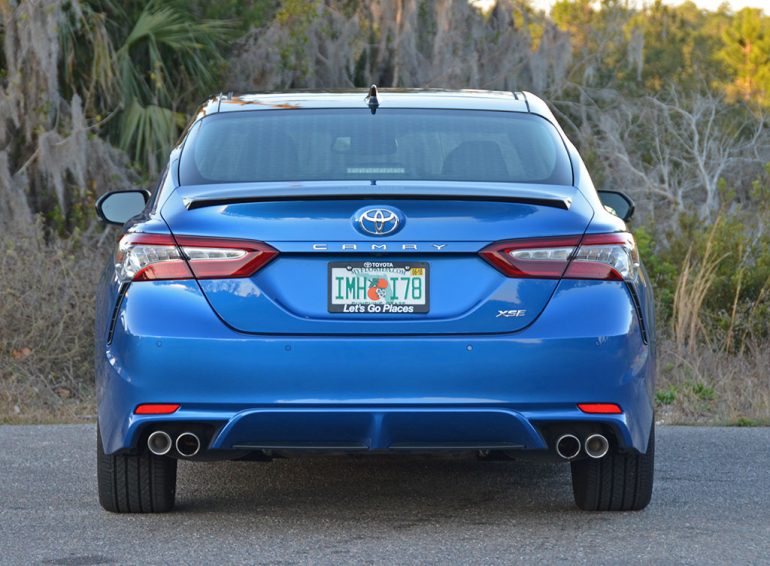 In the department of handling and ride quality, the Camry XSE V6 is tuned more to the soft side of luxury where it soaks up bumps but leaves a bit of guessing for when its pushed near its limits never fighting back as a sports sedan would. The acceleration is substantial, reaching 60 mph from a standstill in about 5.8 seconds. Nevertheless, the soft side of the Camry’s driving character takes a literal front seat and never deviates from it even in the Sport drive mode, one of three drive modes (Eco, Normal, Sport) that customize the steering feel, transmission shift points, and throttle response. If you are ever so inclined, pushing the Camry to the limit hangs its threshold on its soft 235/40R19 Michelin Primacy tires that wrap rather stylish 19-inch alloy wheels. There are also other shortcuts taken to tone down what would otherwise be a complete sporty experience with the quad exhaust tips actually being tied to a dual-exhaust setup, instead. Toyota doesn’t want to get their base too excited, which is understandable when you’re faced with such bold designs in your hottest selling sedan. To offer something for all tastes, the L, LE, and XLE trims greatly tone down the exterior styling with unique front and rear design treatment that doesn’t have near as many sharp edges or cut-lines as the SE or XSE trim levels. 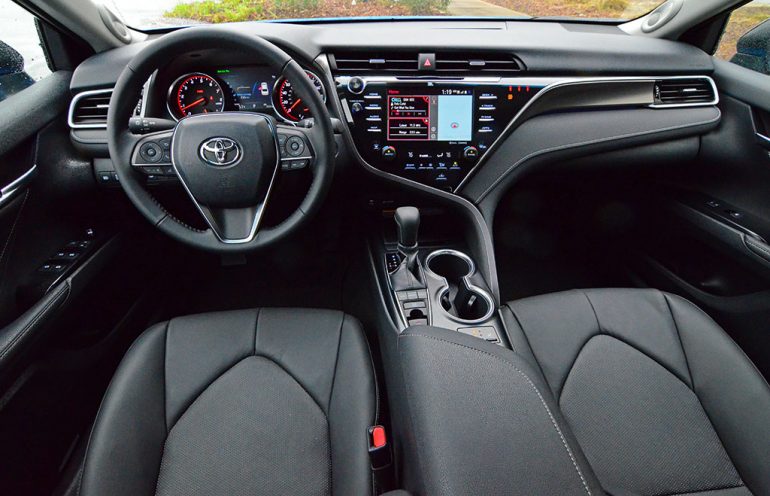 There is a lot in the new 2018 Camry that proves Toyota’s methodical approach in the design of their vehicles, even if the new Camry has in-your-face styling for the sporty trim levels. The methodical approach has paid off well and will continue to do so with the Camry growing slightly larger, receiving improved active safety features, and finally doing always with many of the cheapened interior traits that hindered outgoing models from receiving praise in the luxury department. Therefore, if you were to choose to swap out your current car for this updated model, the benefits would be more substantial than in previous years. If you are keen to put aside some money for this model, then take 30 seconds to have a free car valuation to see how much your current car is worth to ensure you get the best value when you sell it. Click here to fill out the form. You can even find helpful information about how to sell quickly if you can’t wait to get your hands on the 2018 Toyota Camry XSE V6. 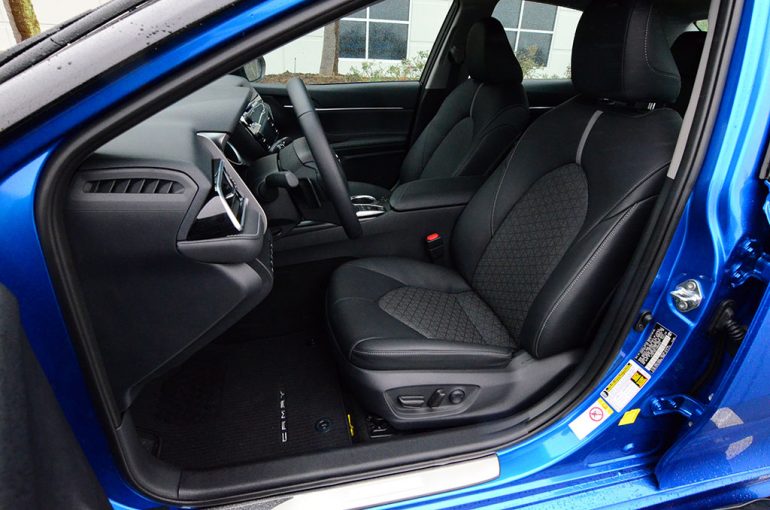 The new Toyota Camry’s cabin improves upon the fundamentals that you expect in a mainstream sedan but takes things up a few notches by cleverly using every inch of the interior for roomy and comfortable seating areas. The interior, for the most part, feels large and there is plenty of visibility making the driver feel invited and assured. The quality of materials is good where there are several soft-touch surfaces. Where things get somewhat interesting is where the center infotainment screen has sweeping lines that somewhat lose the balance of the dashboard sometimes making your eyes follow an unexpected path down to the shifter column. Outside of the oddity of the design, the fundamental aesthetics come into play for each reach of the essential controls and the large 8-inch infotainment touchscreen. 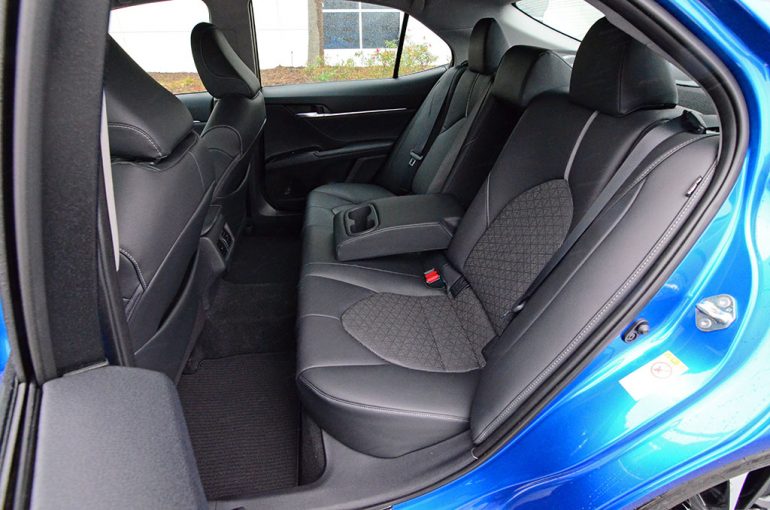 As a striking contrast to what the Camry has done in its design department and use of a worked but proven drivetrain, the tech used in the infotainment unit for integration is subpar when pitted against direct competition. There isn’t Apple CarPlay or Android Auto. Instead, Toyota rests on their Entune app suite integration, which may suit the needs and wants of some but is somewhat of a mixed basket of features that heavily rely on your smartphone for simple functions that should otherwise be handled by the car unit. At the other end of tech, the new Camry XSE V6 is equipped with LED headlights, a pre-collision system with pedestrian detection, dynamic radar cruise control, lane departure alert with steering assist, automatic high beams, blind spot monitor with rear cross traffic alert, and an optional 360-degree bird’s eye camera system found on my test vehicle. 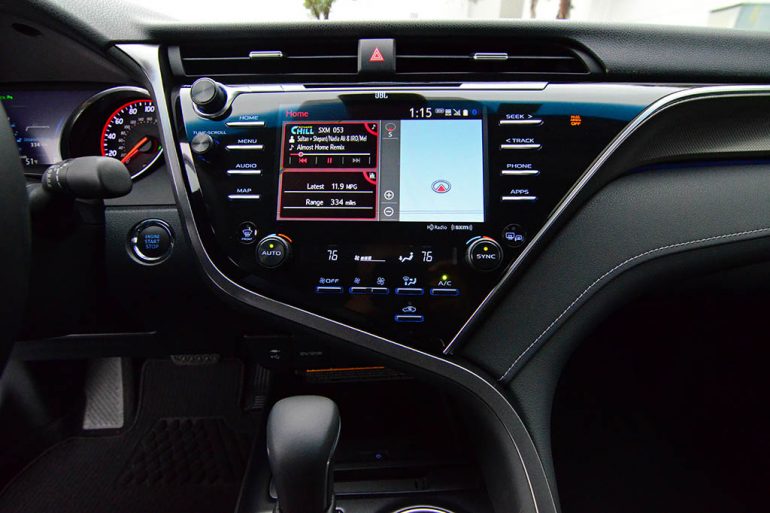 The versatility of the Toyota Camry shines much brighter than its tech integration where you will find ample cargo room in the trunk and the ability to fold the rear 60/40-split seatbacks for additional space. The ease of entry and exit up front and out back also plays up the versatility of one of America’s best-selling automobiles. 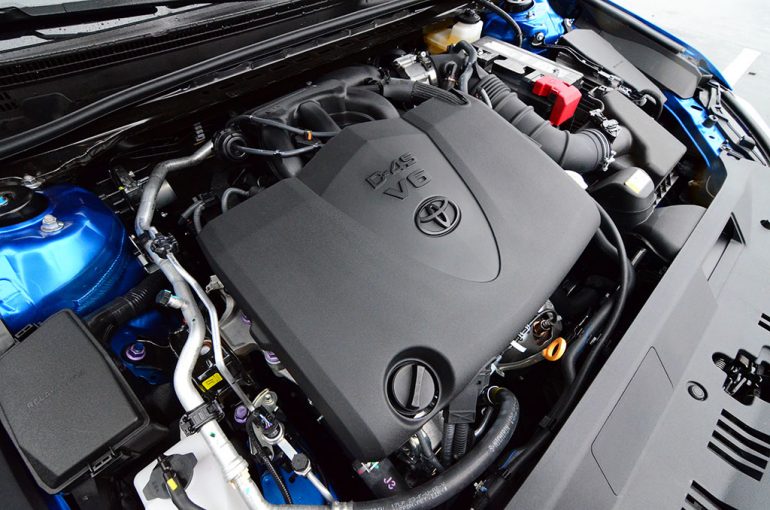 Being a Toyota product, and one of their best selling at that, the new 2018 Camry will continue to be a stellar sales proposition for the brand and gain additional interest with its available sporty styling. Being that the quest for midsized sedans is becoming questionable with the influx and desire for crossover utility vehicles, the Camry will need to continue to work overtime to retain attention and stay on pace with its stiff competition. As such, the pricing of the Camry may become the deciding factor for some, which is perceived to bit on the high end with a fully-loaded price for my test vehicle at $39,253. Still, the new 2018 Camry starts at just $23,495, and for a middle-of-the-row Camry XLE 4-cylinder, you will be expected to pay just over $29,000. With the price in mind, the new 2018 Toyota Camry begs to rest its value on a long and stellar reliability reputation and the added bonus of fresh Sporty looks that sets it apart from the crowd of normalcy.

>> Get the best price on the Toyota Camry from a network of local dealers now. <<