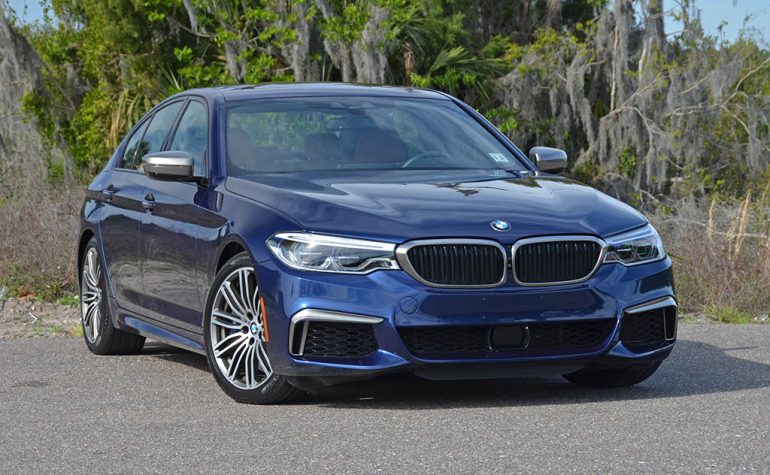 Being a long-time BMW owner and purist of the German brand, I was naturally excited to get my hands on the M550i midsized luxury performance sedan for a week. While the new 2018 BMW M550i is not to be confused with the new 600-horsepower AWD M5. Though, the M550i is as close as I can get to the M5 until it reaches dealer lots in the weeks to come. With that said, I was pleased to get a slight taste of BMWs somewhat re-tuned driving machine spirit, which tends to get lost in the mix of their long line of luxury-clad top-trimmed vehicles. While the new M550i sports the infamous “M” letter in its name (the only way to get the 550i), it tends to translate as well as an “M Performance” packaged vehicle of the past yet instills the desired performance of a top-trimmed vehicle of its segment in its rightful place well below the real-deal M5. 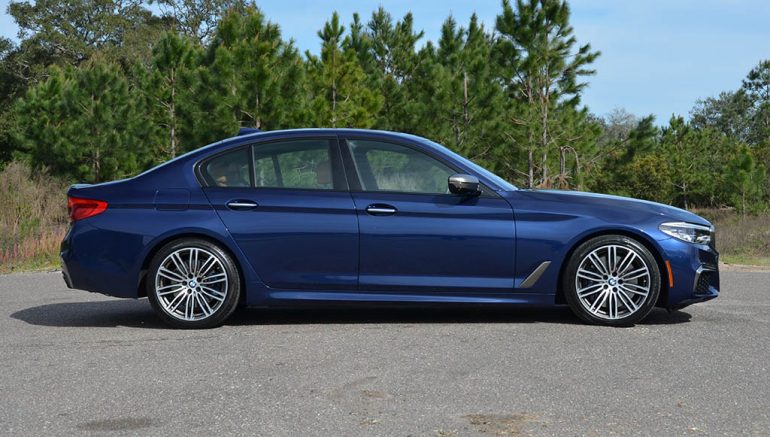 The new M550i wears its badging with pride in knowing that the top tier of the 5 Series line, apart from the M5, can only be had in the M550i signification touting its 4.4-liter twin turbo V8 with 456 horsepower at 5,500-6,000 rpm and 480 lb -ft of torque peaking from a low 1,800 rpm on up to 4,750 rpm. The power is sent to the sophisticated xDrive all-wheel-drive system after being directed through a direct-feeling ZF-sourced 8-speed automatic transmission. The collective parts of the M550i xDrive’s powertrain get the job done and some but only with a hindrance of a feeling that there’s extra heft carried around by the aluminum-bodied 5-Series tipping the scale at 4,372 pounds. The weight of the M550i xDrive, despite an adaptive suspension system that feels as if it’s struggling to keep things in check, is the only fault I find in the driving demeanor of the M550i. The softness of the M550i tuned more to the side of luxury appears to be where it departs from its M-Performance badging. Otherwise, the M550i is poised and ready to reach 60 mph in just 3.9 seconds by the way of the launch mode while holding a respectable handling aspect. Still, much of the enthusiast driver connectivity is somewhat lost in the M550i over the previous generation V8-powered 5 Series BMWs. Surprisingly, the new M550i xDrive is a hair faster than the outgoing-generation M5 in a straight line, so there’s that to put in your pipe and smoke. 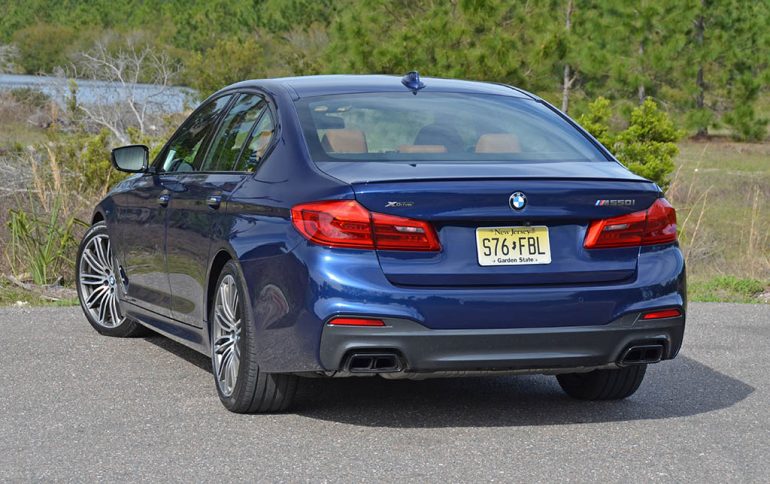 To avoid mincing words or clearing up my previous thought about the new M550i, it does, however, thrash the road like the business with a rear-wheel-drive bias from its xDrive all-wheel-drive system and its ability to cover ground like a runaway freight train. In all, the performance of the M550i is more of a hidden gem that awaits its extraction to expose its true beauty. Only thing, that beauty is only skin deep as their remains to be a disparity when communicating the road to the driver. On the plus side, serving duty as a well-thought-out performance luxury sedan, the M550i does its job with an aggressive rear steering system that virtually shrinks the wheelbase, an adaptive M suspension system that adapts to the road for a supple luxurious ride quality or one that stiffens at the press of the drive mode into Sport or Sport Plus, and respected efficiency to muster out 25 mpg on the highway from its twin-fed V8 engine (16 mpg city / 19 mpg combined). The soundtrack of the 456-horsepower boosted V8 changes with the drive mode with a welcomed but subtle growl but gets a dose of artificially fed sound inside the cabin. 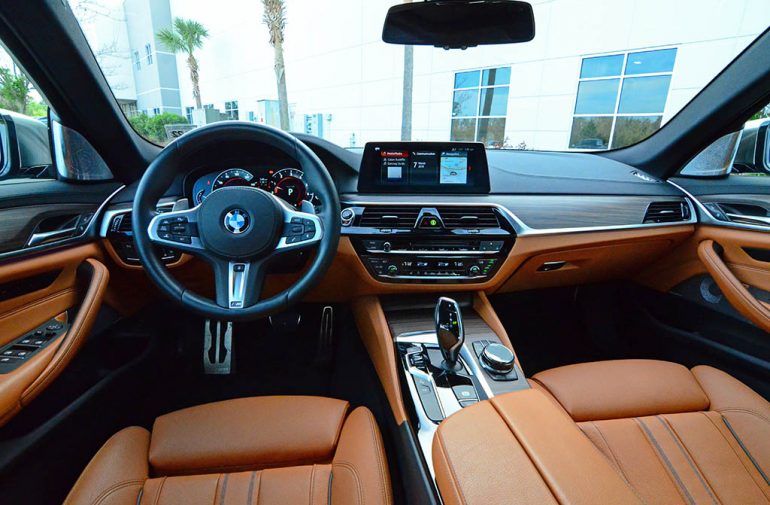 The traditionalist BMW fan, or luxury sedan buyer for that matter, will feel right at home inside of the new M550i as it takes the new trend for the German brand and stays true to its many improvements over previous generations. The latest iDrive infotainment and control system is the best yet, as I have explained in previous new BMW 5 Series reviews, sporting the latest touchscreen interface and simplified menu sets. Much of what I liked in my many 5 Series and 6 Series reviews is kept intact in the new M550i from the wireless Apple CarPlay integration to the comfortable but supportive 20-way multi-contour power front seats. 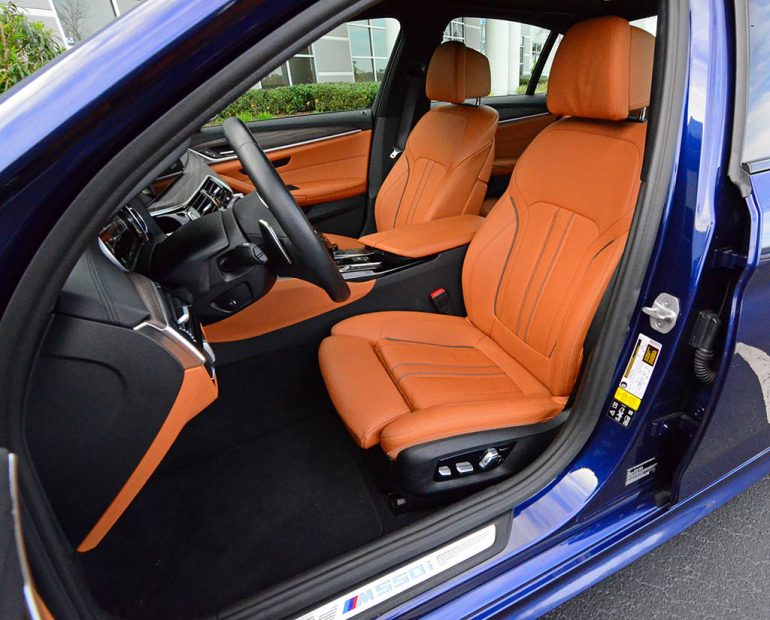 Touted as having an inspired M Performance theme in its badging and technical vehicle nomenclature, the M550i naturally raises the bar for those who seek a taste of the letter M that BMW has recently thrown around like a hot potato for many models. While the M550i isn’t a true M vehicle, it plays more on the marketing side to be the quintessential top-of-the-line 5 Series. While the new M5 has taking king-of-the-hill performance ranking for the 5 Series, the M550i makes up for lost time where BMW’s M cars may have been considered a top-of-the-line model. To avoid much more confusion, the M550i wears many masks but never inches anywhere close to what the M5 is said to offer. With that in mind, the new 2018 BMW M550i, which can only be had in one trim featuring its xDrive all-wheel-drive system, starts at a price of $72,100. 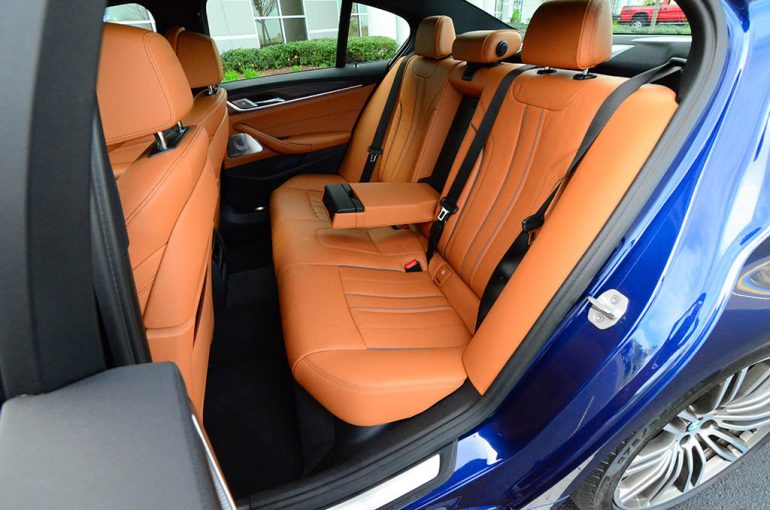